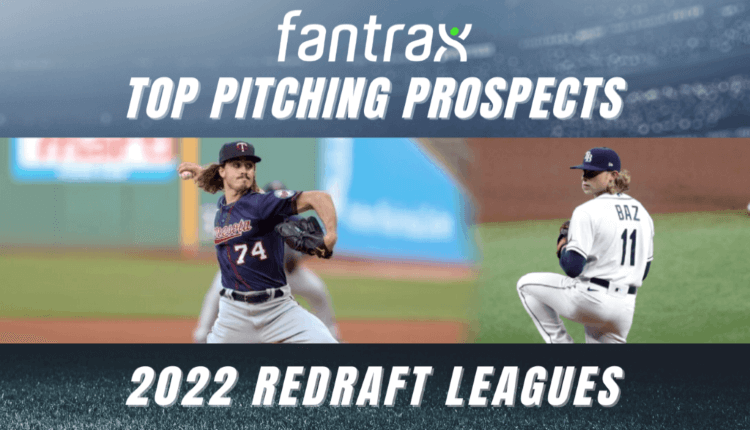 As I mentioned in the hitters version last week, the prospect landscape can be a minefield for fantasy, especially with pitchers. Very few pitching prospects return solid fantasy value out of the gate, but we have several this season that could do just that. The list of draft day top pitching prospects to target is in the single-digits, but there are plenty more that should be up throughout the season, including many in my top-10 overall.

There’s no rookie pitcher I want more in 2022 than Shane Baz. The electric right-hander dominated minor league hitters in 2021 to the tune of a 2.06 ERA, 0.80 WHIP, 4.4 BB%, and a 37.9 K% in 17 starts. He was just as impressive in his trio of MLB starts too, posting a 2.03 ERA, 0.68 WHIP, 6.1 BB%, and 36.7 K%. Baz also recorded an elite 16.2% SwStr rate in the Majors, which is in line with his minor league marks (17.5% in 2021). With two elite offerings in his four-seamer and slider along with a good curveball and solid changeup, Baz has the potential to be one of the top strikeout arms in baseball. And thanks to his improved command and control, low ratios should accompany the strikeouts as well. All the ingredients are in place for a monster 2022 from Baz.

If you don’t want to use a top-130 pick on Shane Baz, then Joe Ryan is a solid target 75+ picks later. Ryan doesn’t have the flashy profile or the lofty ceiling that many top pitching prospects have, but he’s always performed exceptionally well in the minors and has a higher floor than most on this list. Over 226 minor league innings, Ryan compiled a 2.67 ERA, 0.87 WHIP, 6.0 BB%, and a stellar 37.2 K%. That’s a sizeable sample size of impressive results, yet Ryan still consistently is underrated in the fantasy world.

The premium velocity isn’t there on his fastball at around 91 mph on average, but the movement and command make it an above-average or better offering along with his solid changeup and curveball, above-average slider, and plus command and control. Ryan is a sneaky bet to finish as a top-40 SP in 2022 if he gets enough innings.

One name garnering additional helium this offseason has been Milwaukee southpaw Aaron Ashby. While his 3.75 ERA and 1.31 WHIP in the minors don’t stand out, Ashby’s ability to miss bats in 2021 sure did. Ashby posted a 36.2% strikeout rate in the minors and a 29.3% mark in his 13 appearances (four starts) with Milwaukee. However, the walk rate has always been a tad high, sitting at 10.4% for his minor league career.

Ashby works primarily with a sinker/slider/changeup mix with the sinker averaging 96.5 mph and helped Ashby post a 66.9% groundball rate in Triple-A and 61.3% in the Majors. His slider is even more effective and is already considered one of the best in the game with a .077 BAA, .154 SLG, .148 wOBA, and 42.0% whiff rate last season. Don’t reach too high for him as he doesn’t have a rotation spot locked up quite yet, but Ashby has breakout potential written all over him if he does get a rotation spot and can take a step forward like other Brewers’ arms before him have. The recent track record in Milwaukee with pitchers is highly encouraging.

I’m not sure exactly how to rank and value Sixto Sánchez for 2022 leagues right now. And frankly, I’m not sure anyone does. A lingering shoulder issue caused Sánchez to miss the entire 2021 season and subsequently required surgery in July. The initial prognosis had him ready for spring training, but recently, Miami Herald Marlins writer Craig Mish was quoted on a podcast as saying, “I have not heard ANYTHING positive about Sixto Sánchez over the past year. Nothing.”

Yeah, that doesn’t make me feel good either. In general, I’m very high on Sixto as a pitcher. He touches triple digits with sink and has flashed both a plus slider and plus changeup with above-average or better command and control as well. But unfortunately, the strikeout rates haven’t reflected his nasty arsenal and now we have this mess to deal with. I’m still a believer in Sixto increasing his K rate moving forward and in his top-25 fantasy SP potential, but he’s extremely risky right now in drafts.

Rewind 12 months and some people were saying that Edward Cabrera had the highest upside of any arm in the Miami organization. Personally, I didn’t agree, but I understood why they thought that way. Cabrera is electric with a mid to upper-90’s fastball, plus slider, and an average or better changeup. He’s been able to miss bats at a high rate in the minors with a 30.2% K rate in 2019 and 36.9% in 2021. His 5.81 ERA and 1.64 WHIP in seven MLB starts have pushed his ADP way down near 400 on Fantrax and 500 on NFBC. That’s a very reasonable price for an arm with as much upside as Cabrera possesses. However, he’s not guaranteed a rotation spot entering 2022 if Sixto is ready to go. Keep a close eye on Sixto’s health and timeline before selecting Cabrera.

As with Cabrera above, Detmers got knocked around in his 2021 MLB debut. In five starts, Detmers posted a 7.40 ERA, 1.79 WHIP, and a 10.9% walk rate. He wasn’t able to miss bats at his usual high clip either, finishing with a mediocre 18.8% in those five starts. It was a small sample size for sure, but I’m not targeting Detmers outside of deeper leagues as he’s likely to begin 2021 in Triple-A. Detmers is an intriguing stash in deeper leagues though, given his strikeout potential, but I’m not sure we see a sizeable fantasy impact in 2022. He’s not a 10, 12, or 15-team target unless you have deep benches. Target Detmers more in your BestBalls and Draft and Hold formats.

Prospects to Monitor/Stash (Estimated ETA Before 6/1)

I’ll combine these two as my outlook and ETA for them is similar. Both Lodolo and Greene are top-15 pitching prospects right now, project as #2 starters, and could be up by the all-star break. Their upside and ability to miss bats makes them intriguing for fantasy purposes and their ETAs could inch closer if the Reds end up dealing one of Luis Castillo, Sonny Gray, or Tyler Mahle this offseason.

There’s a decent chance Contreras pitches well in spring training and cracks the atrocious Pittsburgh rotation. Seriously, go look at their depth chart. You or I would have a shot at cracking that rotation and I’m not even sure I can hit 70 mph anymore. Anyway. Contreras dominated in the upper minors last season before getting a late-season start with Pittsburgh. In those 13 starts, Contreras recorded a 2.64 ERA, 0.96 WHIP, 5.6 BB%, and 35.0 K%. It’s not a matter of if with Contreras. He’s going to break into Pittsburgh’s rotation this season, likely before June and could carve out some solid fantasy value.

While he’s not currently projected to make the rotation in Seattle, Matt Brash could definitely force his way in with a strong showing in spring training. And yes, that’s without any Triple-A experience. The Mariners calling up Brash during the last week of the season (never pitched) shows that they think Brash can compete in the Majors right now. Brash struck out 35.1% of the batters he faced in the minors last season with a 2.31 ERA and 1.14 WHIP. The more likely scenario is Brash beginning at Triple-A and debuting around June or so.

G-Rod is likely going to be up at some point around the all-star break, and you’re going to want him on your team when that happens. He’s my #1 pitching prospect in all of baseball (slightly above Baz) with four above-average or better offerings that he can miss bats with along with above-average command and control and a workhorse frame. Rodriguez finished 2021 with a 2.36 ERA, 0.83 WHIP, 6.8 BB%, and a whipping 40.5 K%. This is a future frontline arm in the making that can make a large fantasy impact immediately.

CMD was spotty at times but solid enough tonight.

My #3 overall pitching prospect, George Kirby has one of the highest floor/ceiling combinations in the minors thanks to his electric arsenal and plus command/control profile. Kirby recorded a stellar 2.53 ERA, 1.08 WHIP, 5.5 BB%, and 29.2 K% between Hi-A and Double-A last season and could start 2022 in Triple-A. The Mariners’ rotation is shaky at the back-end, so a strong Triple-A showing could have Kirby up by the all-star break. This is the type of arm with a higher chance of immediate success.

Coming off a stellar 2021 season that included a pair of Triple-A starts, Max Meyer is about ready to break down the door to the Marlins rotation. In 22 starts, Meyer posted a 2.27 ERA, 1.19 WHIP, 9.3 BB%, and 28.6 K%. He possesses one of the best fastball/slider combinations in the game and has flashed an above-average changeup as well. If he can keep the walks in check, Meyer could make a decent fantasy impact in the second half of the season. That Marlins rotation is loaded though.

I’m honestly not as high on Liberatore as some are given his pedestrian fastball, but he can miss bats with his plus curveball and could see sometime later in the season if St. Louis needs a starter. That elite defense behind him would certainly help too. He’s not a great pitcher to stash, but I wouldn’t mind him later on in a bestball or D&H.

A pop-up prospect in 2021, Caleb Kilian excelled across Hi-A and Double-A, finishing with a 2.42 ERA, 0.88 WHIP, 3.4 BB%, and 29.3 K%. As you can see with that minuscule walk rate, Kilian has phenomenal command and control with a solid four-pitch arsenal. With a good start to 2022 in the upper minors, Kilian could crack the Cubs rotation at some point this summer.

Luis Gil, NYY: This might be surprising given his success with the Yankees late last season, but there are two major reasons why Luis Gil finds himself in this section. Firstly, his control has been a hindrance in the minors at 13.7% and sat at 14.7% with New York. That’s not going to cut it. Also, there’s no guarantee that Gil wil be a full-time starter for the Yankees this season, especially once Jameson Taillon is ready.

Daulton Jefferies, Oakland Athletics: Jefferies projects as a serviceable back-end starter longterm but the upside here is limited and he might begin 2022 in Oakland’s bullpen.

Jackson Kowar, KCR: After excelling in Triple-A, Kowar was one of the worst pitchers in baseball following his early-June debut. An 11.27 ERA and 2.07 WHIP across 30.1 innings turns my stomach and he’s not more than a back-end starter longterm in my eyes anyway. You can do better.

Forrest Whitley, HOU & MacKenzie Gore, SEA: Ignore the Nike slogan and just don’t do it with these two. Until they show any signs of righting their respective sinking ships, I want no part of them in fantasy, especially in redraft leagues.

A.J. Puk: The command/control profile isn’t quite there, he can’t stay healthy, and he’s not even considered a starter anymore. Hard pass.

Could/Should Be Up, But With Minimal Impact

Likely Won’t Be Up But Wouldn’t Rule It Out