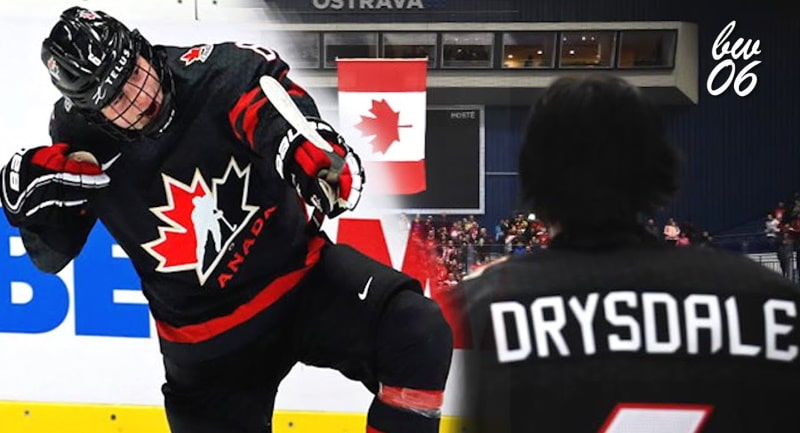 We are now approaching a sample size for the season that is quite revealing for most prospects (this year). Most prospects have docked significant time with their teams around the globe, and now that we’re approaching March its time to face the music and reveal who the top 18-year-old prospects from the 2020 NHL Draft are. A few of these guys are not surprising, but one Blackhawks prospect has snuck into this list.

Some things to note before we talk about these prospects – the criteria are an 18-year-old, drafted NHL prospect from the 2020 NHL Draft. This leaves out a few significant names, who theoretically would be on this list. Using the Fantalytica prospect projection platform, we’ve found these players solely from their statistical profiles. 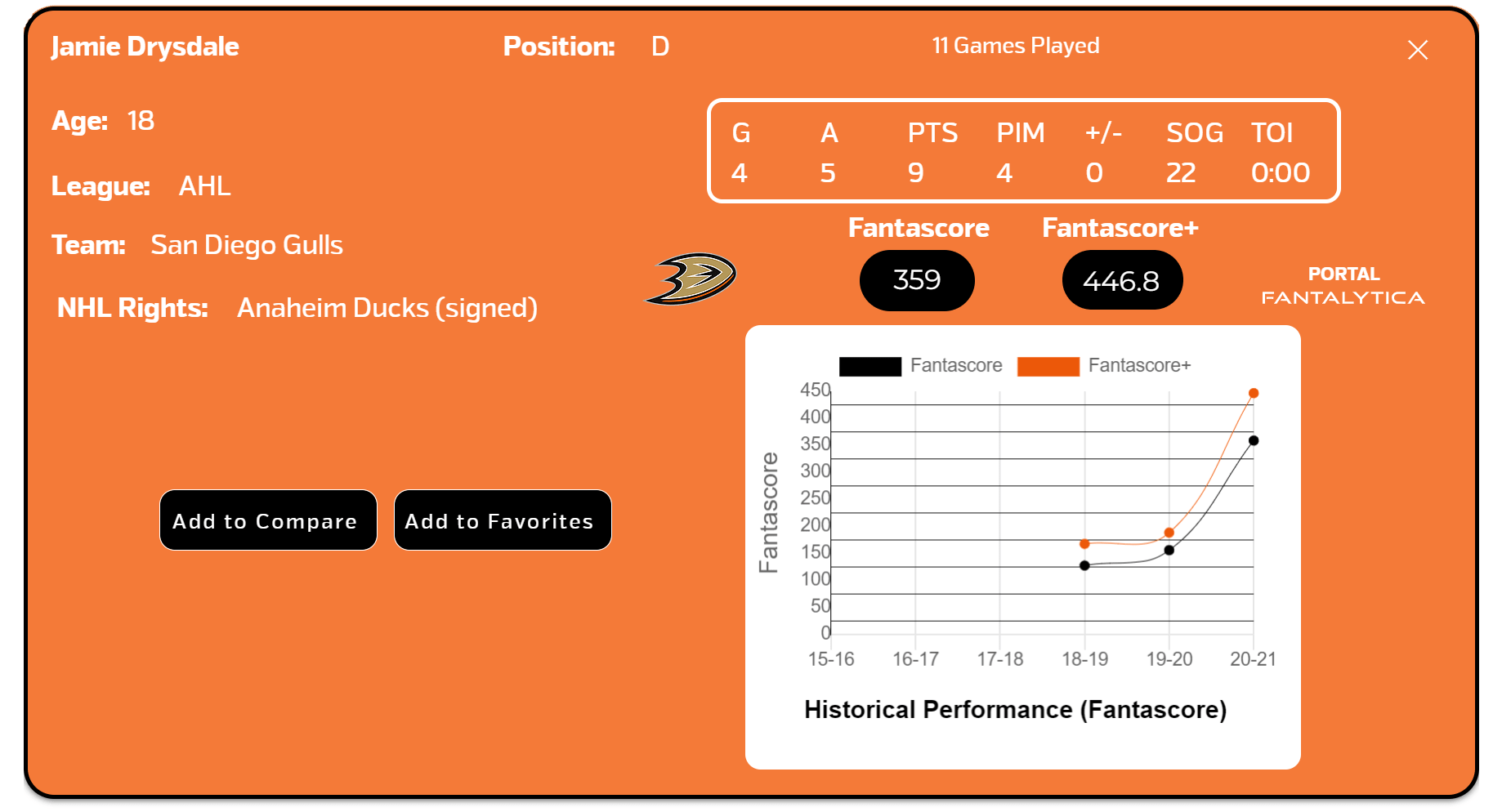 Jamie Drysdale came out of the gate in a cannon. The Anaheim prospect was taken 6th overall in the 2020 NHL Draft. To say he’s trying to make a statement is putting it lightly. Drysdale has been given an opportunity (due to the OHL being on hold) to play in the AHL with the San Diego Gulls. After his first 10 games, the elite puck-mover has chalked up 9 points in 11 games. Something that immediately jumps out are his 4 goals. For an 18-year-old it’s impressive, for a defenseman it’s impressive, for an 18-year-old defenseman it’s downright criminal.

The Duck’s front office will surely take a hard look at Drysdale when they choose to send him to the OHL. Once he is required to return to the Erie Otters, the front office could make a choice to keep Drysdale on the NHL roster instead. It’s obviously nice for the Ducks to watch Drysdale pulverize in a professional league at such a young age. Of anyone on this list, Drysdale has the best shot at playing NHL minutes this season. If you missed him at the draft, you may be reconsidering your decision. It’s safe to say he’s their future star on the blueline. Take that for what it’s worth. 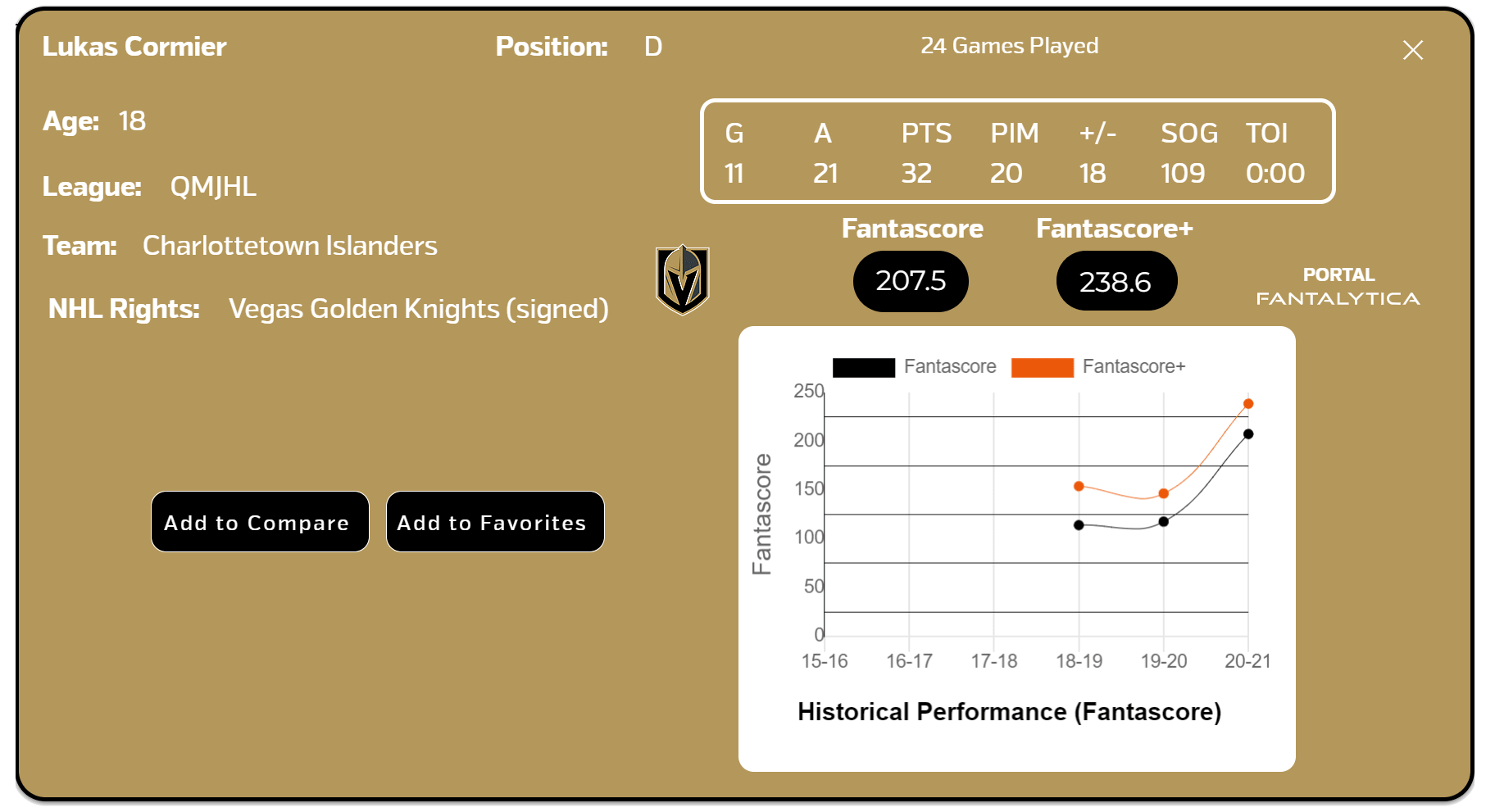 Lukas Cormier is the first player we’ve now mentioned twice on FantraxHQ, and for good reason. Cormier is showing on a nightly basis how inferior the QMJHL is to his game. Taken in the 3rd round, Cormier was sent to play for the Charlottetown Islanders for the year. He’s not playing in the AHL because the QMJHL was the only league in Canada to evade a league-wide pause on play. Because of the early start, Cormier has been electric. Granted, he’s been set up (due to COVID) to play against the same handful of teams every few days.

Despite the level of competition being under par for Cormier, he’s put a lot of stock behind his performances for fantasy owners. He’s pumping 4-7 shots a night, assists every game, and goals nearly every other game. Although he was taken in the 3rd round, Cormier is already pushing to be one of the few prospects to become a future NHL player. It’s unlikely his price tag fits that of an average DY 3rd rounder, so take mild caution before sending your team in a rebuild to acquire him. If he’s available on waivers or sitting in a contender’s minor system, he may be worth a look. Another repeat player we’ve previously talked about, Roby Jarventie has finally broken a relatively drive spell in the Finnish Liiga. Since his first appearance on FantraxHQ, Jarventie has found trouble potting goals and assists. Despite his recent troubles, Jarventie still seems to produce 3-4 shots a night (in a men’s league as an 18-year-old). This year produced growing pains for the young prospect but do not fret – Jarventie’s future is bright.

I’d imagine he gets the first shot from the Senator’s 2020 NHL Draft class to play in the NHL. Any 18-year-old who can excel in a men’s league is a safe bet for your dynasty team. It’s realistic to expect Jarventie to spend an additional year in Finland so he can hone his shortcomings before making the jump. Have some patience, and like the crypto industry says, HODL. 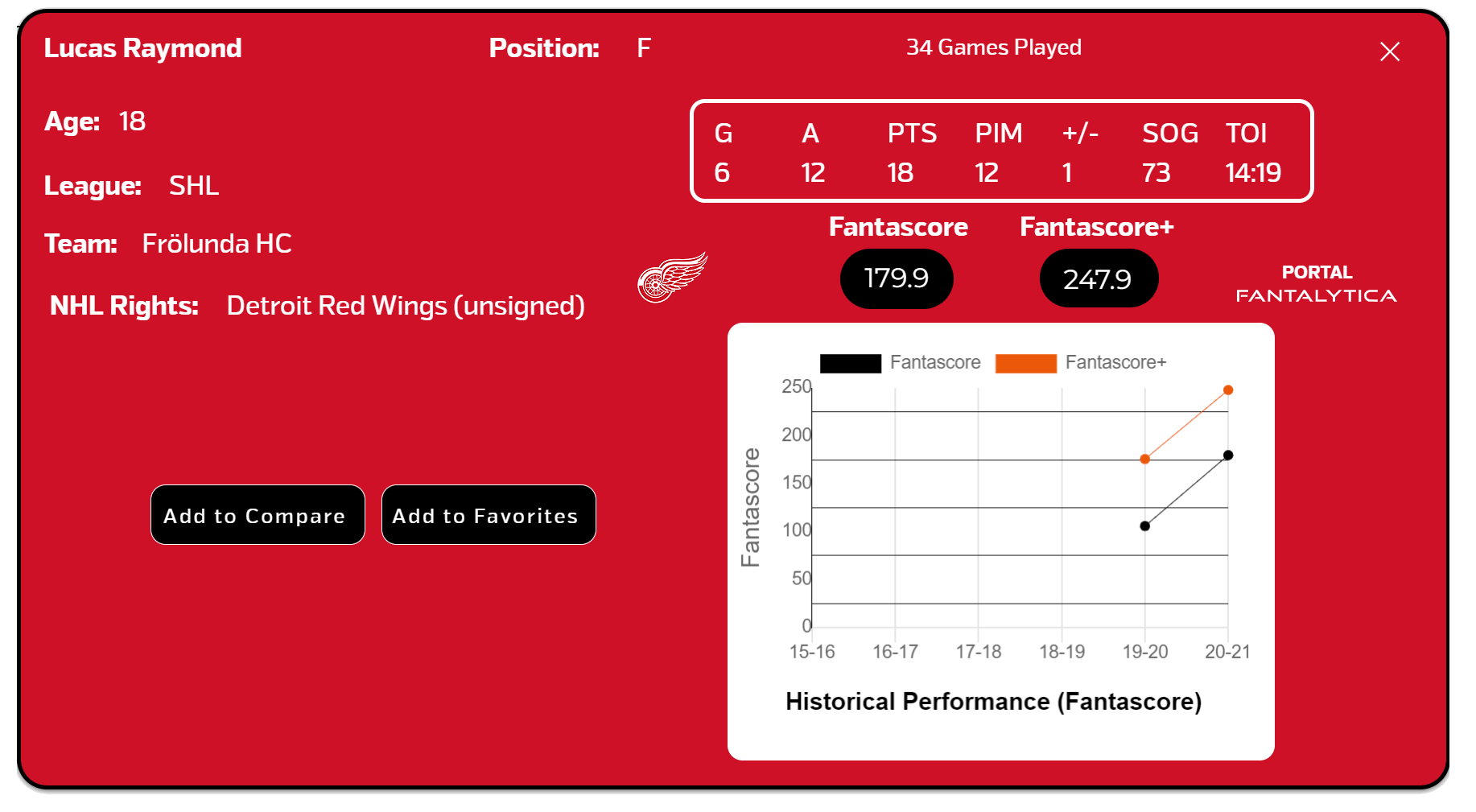 Lucas Raymond has recently found himself on Frolunda’s Injured Reserve. He’s expected to miss 6-8 weeks of hockey before a return – this should not bother you. He’s an elite playmaker with a significant upside that you cannot usually find at 4th overall. The Red Wings have a plethora of talent marinading in Sweden right now, and Raymond tops their list of NHL hopefuls.

Expect Raymond to be a 1st line winger in a few years for your fantasy team. Playing with Anthony Mantha or Dylan Larkin is a mouth-watering dream that soon will become a reality. Continue to hold him if you own him and consider acquiring him if you have the assets to do so. 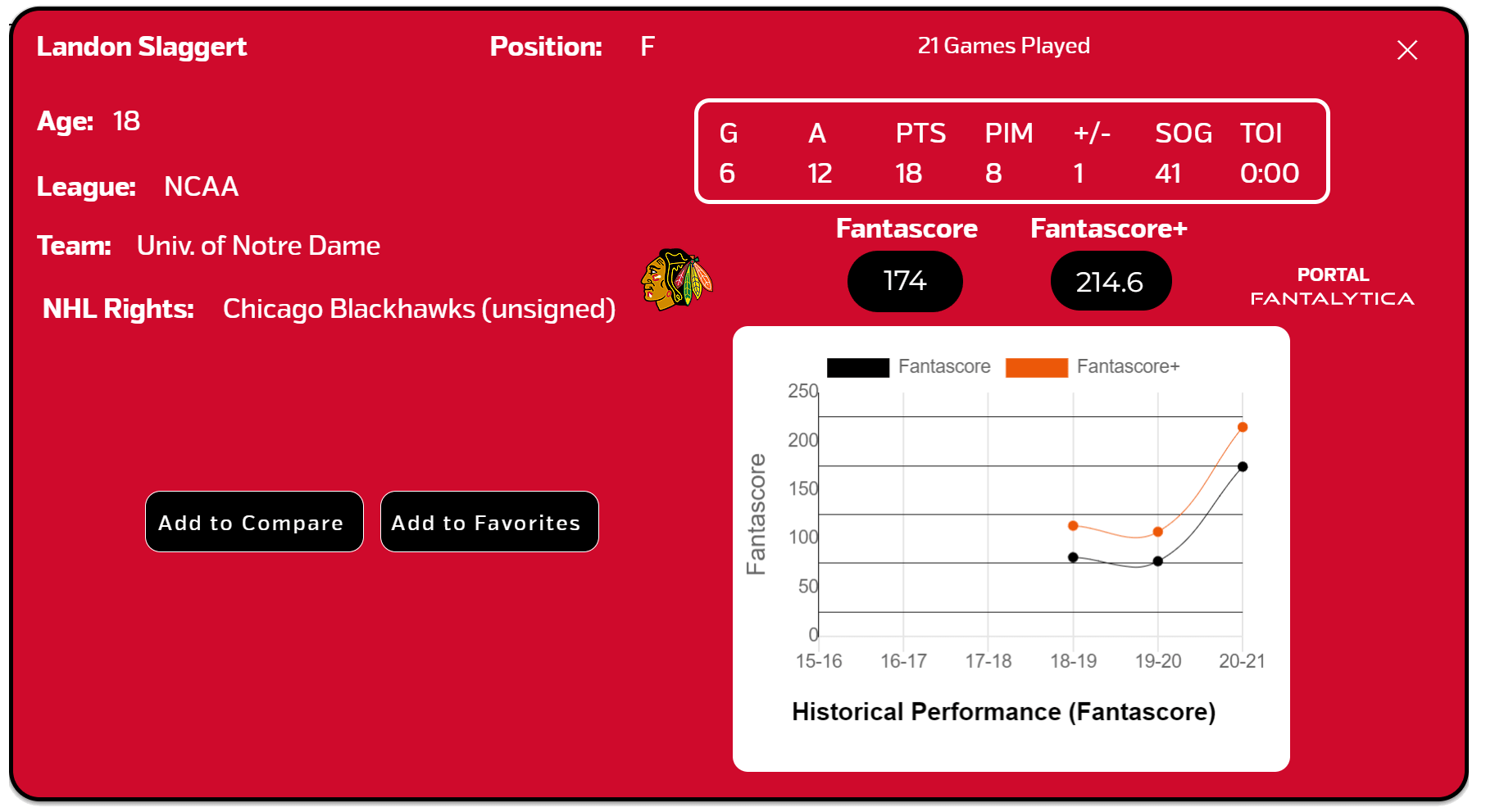 Landon Slaggert being on this list is a huge surprise. If you’re a Blackhawks fan, you still may not know who Slaggert is. He’s a prospect of your favorite team, actually! Slaggert currently plays for Notre Dame in the NCAA – he’s playing with his brother Graham on a line. It’s a story that seems to continue to unfold with Slaggert and the Blackhawks, taken 11 spots behind Cormier in the 2020 NHL draft.

The NCAA is filled with 18-year-olds this year, and more than usual. It’s fair to say the level of competition this year compared to previous years is lower but in Slaggert’s case, it’s not a knock. Slaggert consistently plays against BIG 10 schools, who are mostly stacked with high-end talent. I’d imagine Slaggert leaves his junior year to join the Blackhawks on a pro contract. Although Slaggert is considered a project, it’s easy to label him as an ‘add’ for fantasy owners. His price is likely low. Scoop him up if you have a free spot open on your minors.

Thanks for reading this week’s NHL Prospect article! If you enjoyed these projections or descriptions, please be sure to check out the platform at https://www.fantalytica.tech/.