Top NHL Prospects Taken After the 3rd Round in 2020 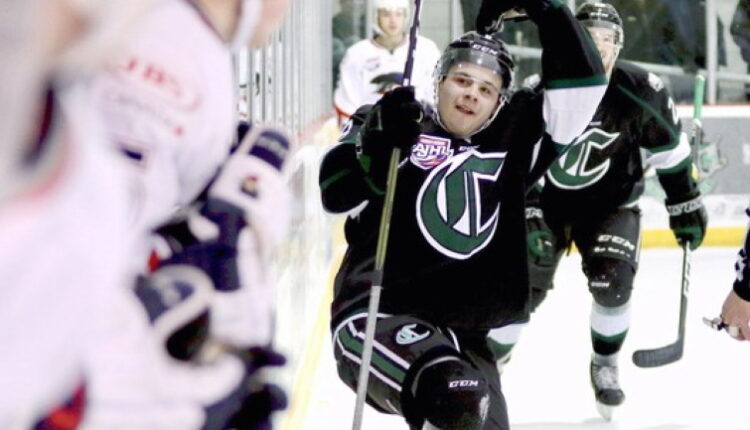 We have waited nearly 365 days for things to be operating again. Despite fantasy hockey being stagnant, one aspect of deeper fantasy hockey leagues has kept owners busy – NHL Prospects

With a regularly scheduled start, the feeder leagues for the NHL have been chugging along as usual. High octane prospects, both drafted and not, have migrated across the pond seeking opportunities to showcase and continue their development. NHL teams did a fantastic job of dispatching handfuls of prospects to their respective originating countries – some got opportunities purely from pedigree. Not every prospect had the luxury of playing on foreign ice – for larger market teams with connections, their coveted North American Prospects found a home without skipping a beat.

Now that hockey is mainstream again, there’s no better time than now to start discussing the futures of each NHL team. Our content will follow a common theme – NHL prospects to watch, acquire, trade away, and most importantly, draft. A unique platform, Fantalytica is the ultimate tool to evaluate and plan your prospect pipeline with. We have proprietary formulas that project a prospect’s output based on your league’s unique scoring rules. The purpose of our content on FantraxHQ is to show the value and significance of a flourishing fantasy minors system. Teams can propel themselves to indefinite success year in and year out with a strong draft + free agency.

NHL PROSPECTS RISERS FROM THE 2020 DRAFT 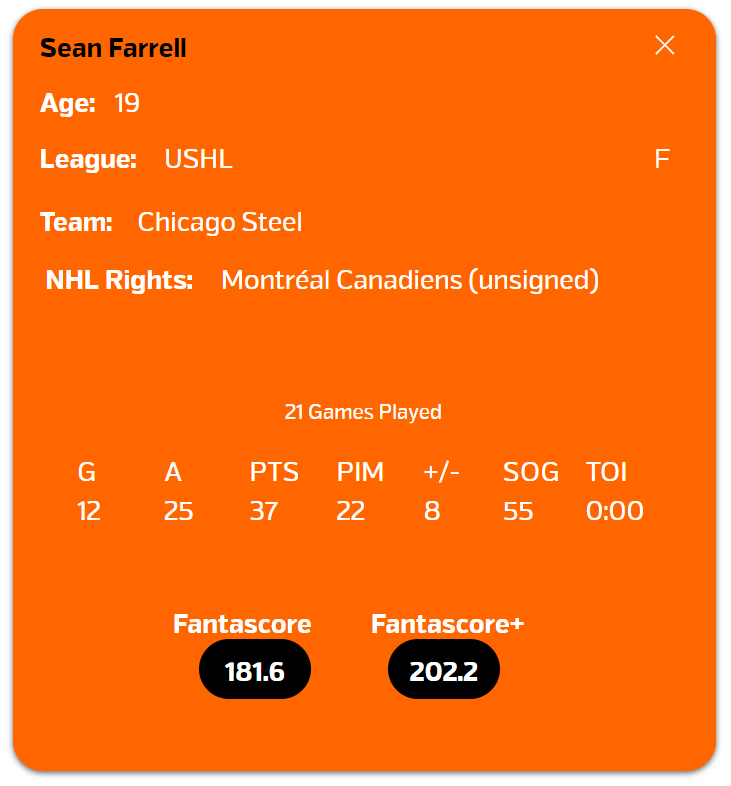 One of the older first-year eligible skaters, the Montreal Canadiens’ 4th-Round choice has been electric this year. Despite his smaller frame, just over 5’9, The elusive skater has elite playmaking abilities. Currently playing in the USHL, he is consistently finding teammates in dangerous areas, driving play with his creativity and high IQ. Shooting just over 2.5 times a night, Sean is a rather safe choice to acquire for your fantasy team. Strike before its too late, as the Canadiens fanbase will surely know everything about him by the end of the season. There’s a good chance he’s still a free agent if your fantasy league only has 3 rounds for the NHL Entry Draft. 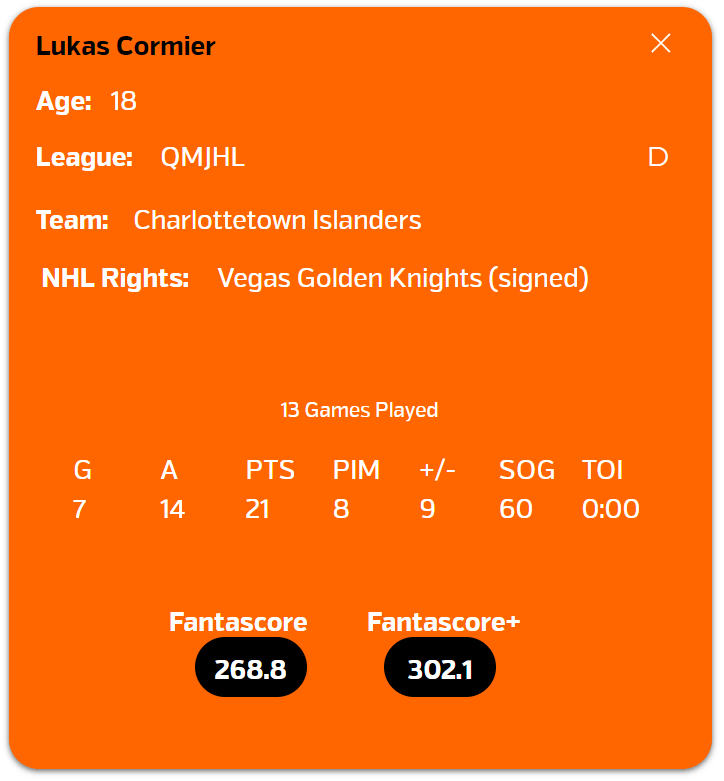 A very cheeky choice for the Vegas Golden Knights, Lukas was drafted early in the 3rd Round at 68th Overall. A natural offensive defenseman, Lucas has a phenomenal shot and has a keen eye for getting pucks on net. Despite being a “shoot first” defender, Lukas can simply thread needles to his teammates in the offensive zone. Playing out of the QMJHL, which is still the only Canadian hockey league playing during Covid, the skill is not quite up to par in recent years – but his statistical profile still shows he can become a solid fantasy contributor for your squad. He’s very unlikely to be owned so you should be able to snag him on the cheap. 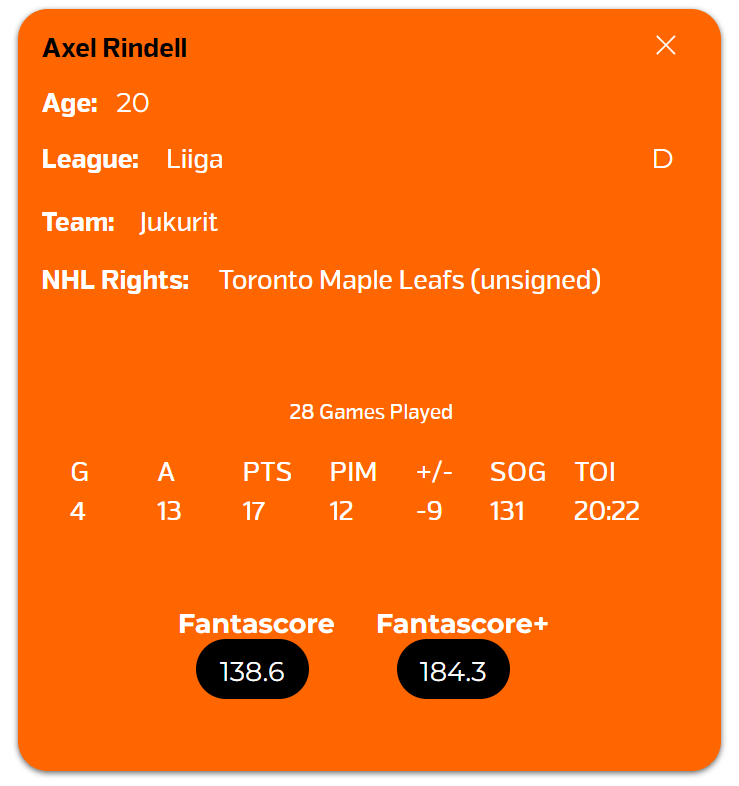 The first of two Finns on this list, Axel is an over-ager who was drafted by the Toronto Maple Leafs in the 6th Round of the NHL Draft. Axel was put on NHL scout radars last season due to a breakout performance in the Finnish Liiga, the top league in Finland. A current Powerplay quarterback for Jukurit, Axel oozes offensive acumen. He is slippery to defend, and can continually finds shooting lanes to drive offense. Don’t let his age fool you, Axel was taken by Toronto because of his upside. If Dubas likes him, you should consider him as well! 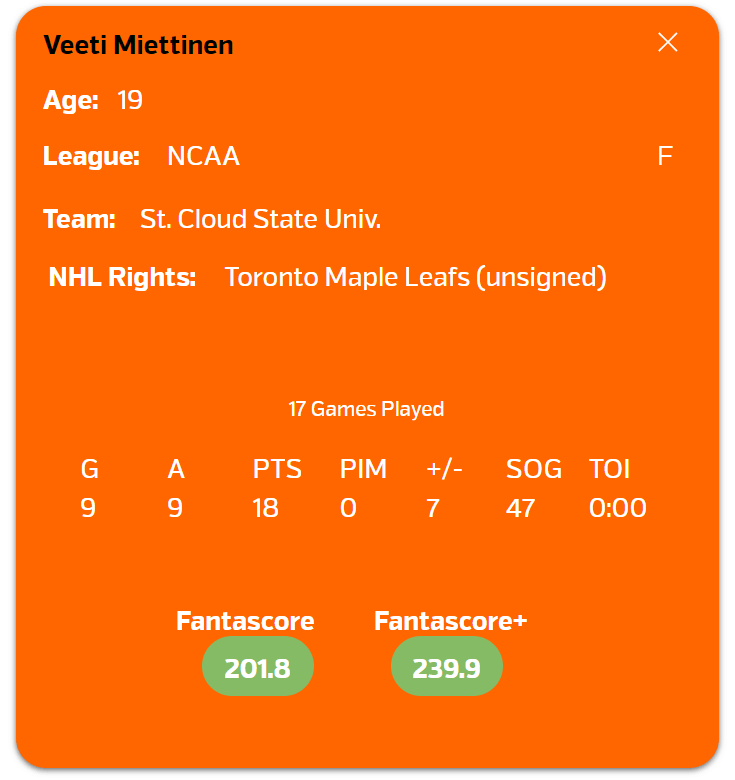 Veeti tore up the U20 Finnish Liiga last year, and his performance this year additionally cannot be understated – producing at a PPG pace for St. Cloud State, Veeti has picked up the North American game far too quickly it seems. His shot is his best asset and St. Cloud has utilized him as best as humanly possible. If you’re in need of goal scoring, and you’re lying if you deny it, Veeti is an ultimate steal for deep dynasty leagues. There’s no reason to pass up a player like this if you have more than 20 minors slots. Veeti likely marinates in the NCAA for another two more years before making his professional debut. Depending on his development, Veeti could be a surprise to go straight from the NCAA to the NHL. 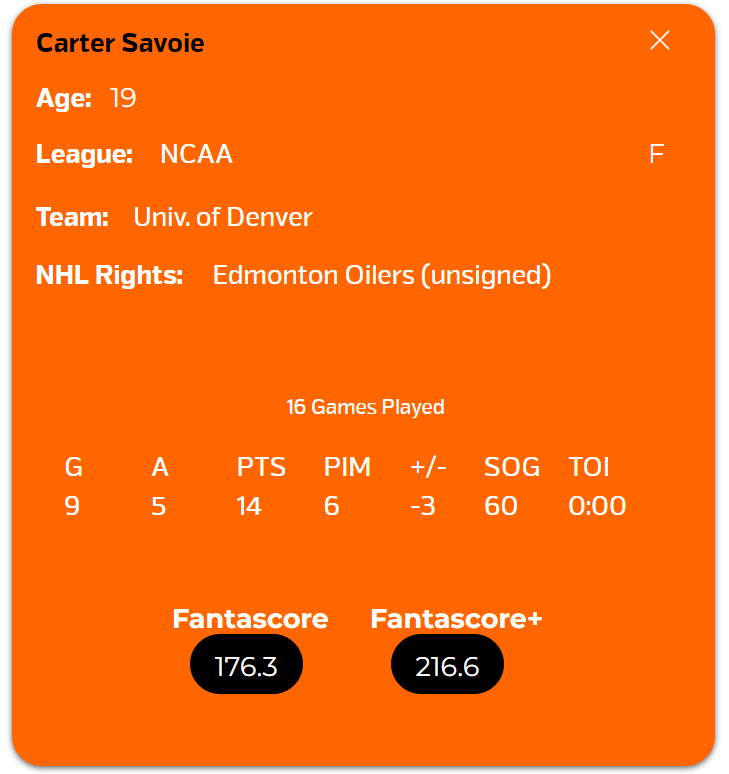 Last but surely not least, Carter is unbeknownst the older brother of Matthew Savoie, a potential 1st Overall choice for the 2022 NHL Draft. Carter was taken in the 4th round by the Edmonton Oilers. Carter came out of the gates red hot for the Denver Pioneers in the NCAA. He took home some player of the month awards for the league after a scorching 6 game goal streak through his first 6 games. Carter is a shooting machine, producing 60 shots in a measly 16 games. The Oilers are running dry in the forward prospect department, so consider the idea of Savoie slotting next to Draisaitl or McDavid once he signs. Carter’s stock has been rising rapidly. Consider him for your next waiver claim.