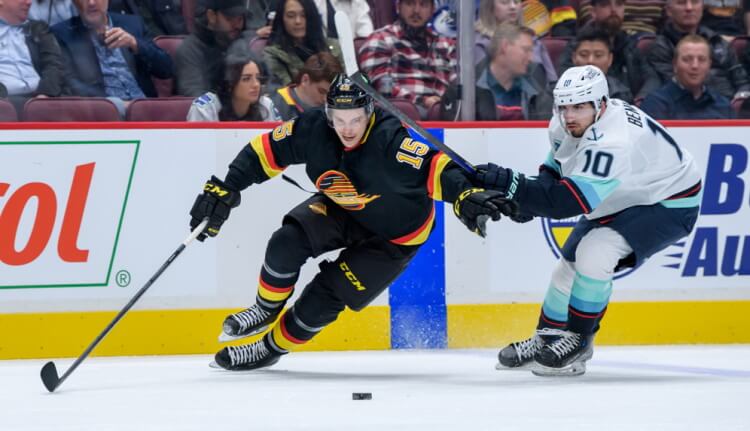 When considering rookies to draft, you want someone with a lot of upside. Although you need to also know what opportunities they have to make the roster. There is plenty of risk in drafting rookies early, but that also brings plenty of reward when you draft a gem.

After scoring the game winning goal to earn gold in the World Junior Championship, Johnson is looking to take the next step in his career. Drafted fifth overall in 2021, he scored 37 points in 32 games in the NCAA last year. Johnson then registered three assists during a nine-game stint with the Blue Jackets. It’s expected he’ll start in a middle six role with the team, either at center or left wing.

Detroit had the rookie of the year last season with Moritz Seider, and maybe they’ll have another Calder candidate with Edvinsson. He scored 19 points in 44 contests in the SHL, so his offensive game is there. The 6’6” blue liner can skate well for his size, which bodes well for earning opportunities at the NHL level. I could see him grabbing a second pairing role out of training camp.

The first overall pick in the 2022 NHL entry draft. Normally that position would push a player higher up the list. But Slafkovsky may not play this season with Montreal, so there is some additional risk here. Even if he does make it, temper expectations. The past few first overall picks (Alexis Lafreniere, Jack Hughes, Rasmus Dahlin, Nico Hischier) didn’t light the world on fire in their rookie campaigns. Slafkovsky has high potential, just don’t draft him too soon.

Eklund made the Sharks opening roster last year. He started off great, with an assist in each of his first three appearances. With one point in the next six outings, San Jose felt it was best he continue the season in the SHL. Now the 2021 seventh overall selection has another chance at earning a full time position. The Sharks aren’t overly deep at wing, so Eklund could potentially earn top six minutes.

Taken ninth overall in 2020, Rossi was seen as one of the more NHL ready prospects of his draft class. He’s had unfortunate luck with staying healthy, but it appears he’s good to go ahead of training camp. He may start out on the fourth line, but I think he will get time on the second line with Matthew Boldy. Rossi may be relied upon to provide some of the scoring after Kevin Fiala was traded to the Kings.

Perfetti worked his way onto the Jets roster, playing in 18 contests this past season. He notched two goals and seven points, playing primarily with Kyle Connor and Pierre-Luc Dubois. Perfetti’s fantasy value will gain a nice boost if he can stick on a line with those two. A top six role is his to lose, making the 2020 10th selection an attractive pick.

The lone goaltender on this list. Thompson found himself as the Golden Knights starter late in the 2021-22 season. He was thrown into a high pressure situation as Vegas was in the playoff hunt, and he did quite well. The 25-year-old undrafted netminder posted a 10-5-3 record with a 2.68 GAA and .914 save percentage. Robin Lehner is set to miss the entire 2022-23 campaign from hip surgery, and Laurent Brossoit is recovering from injury too. This means Thompson could be the de facto starter this year.

Drafted first overall in 2021, Power returned to university for the bulk of the 2021-22 season. It was a rare occurrence for a first overall pick, but he did get into some games late in the year. Power notched two goals and an assist through eight contests, averaging 22:05 of ice time. He’s projected to play on Buffalo’s second pairing, and should see time on both the power play and penalty kill.

McTavish was incredible at the World Junior Championship – racking up 17 points in just 7 matchups. He capped it off with a tournament-saving defensive play, which led to his Canadian squad winning. McTavish spent time in the NHL, AHL, and OHL last year. Don’t expect that to happen again — he’s ready for full-time NHL duties. He’ll likely start in a middle-six role, possibly as third-line center. He might also be moved to left wing to get top-six minutes, perhaps playing with Trevor Zegras.

Beniers is the clear-cut favorite in my mind to be the top-scoring rookie this year. He tallied nine points in 10 contests late in the 2021-22 season for the Kraken. The second overall pick from 2021 is slated to start the season as Seattle’s top center. He could form a line with new additions Andre Burakovsky and Oliver Bjorkstrand. While lack of chemistry may be an issue, opportunity certainly isn’t a problem for Beniers. He is the only forward on this list to crack our top 100 fantasy hockey forwards.