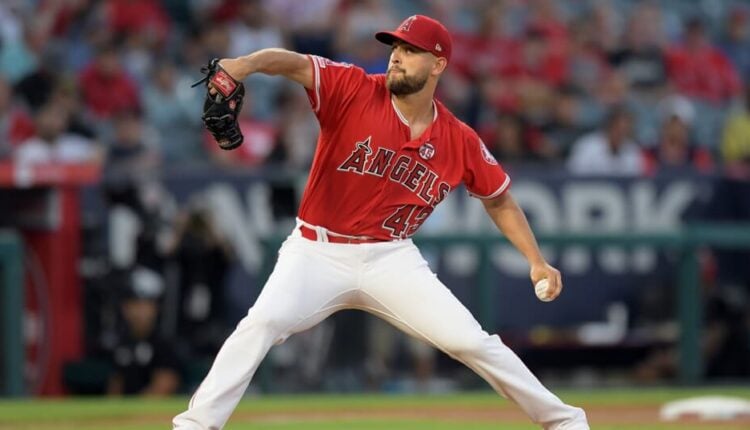 For redraft leagues, this next week marks the end of the fantasy baseball season. Yet, that’s not the case for dynasty leagues. Personally, I have a great admiration for dynasty leagues. For starters, I believe they mirror “real-life” baseball strategy within front offices better; rather than trying to win just one season, dynasty managers need to be focused on winning sustainably. Plus, say that you are a big Juan Soto fan, and rostered him even when he was a prospect. Well, you could have him on your team for his entire career! It’s a nice twist from redraft leagues and requires a lot of strategy.

Speaking of which,  all dynasty managers, regardless of team construction, should be trying to find undervalued young players on the trade market. For win-now teams, these players can help your team immediately, or turn into valuable trade chips. For retooling teams. these players can be a part of your next contending teams. It’s the perfect of all worlds!

Today, let us look at three pitchers to target in dynasty leagues. All of them are 25-years-old or under, meaning they can fit with any team out there. If you don’t target them now, you might miss your chance to revamp your pitching staff with a productive young arm!

A few months ago, I would not have thought that I’d ever be writing about Logan Gilbert as an undervalued pitcher. After all, he was seen as one of the top pitching prospects in all of baseball at the beginning of the season! Yet, that’s what a 5.31 ERA in the second half will do to you.

To be completely honest with you, I thought Gilbert was the best pitching prospect in the league at the beginning of the season, and his 2019 season was a major reason why. Between High-A and Double-A, he posted a 31.7% strikeout rate, 6.3% walk rate, and 0.95 WHIP. Since being the 14th overall pick in the draft in 2018, he had done nothing but dominate, and, by all accounts, had the perfect combination of a complete arsenal with terrific command.

That takes us to his MLB debut, and, as you’d expect, it took some time for him to get adjusted to the majors. In his first four starts, he posted a 5.94 ERA, and wasn’t utilizing his arsenal optimally; too many curveballs, too few changeups. Since then, though, he’s been terrific. Strikeout/walk ratio remains the supreme predictor of future success, and Gilbert (27.1% K, 5.2% BB) has shined there. If you’re looking for an ERA conversion, he’s posted a 3.62 SIERA, which is quite impressive as a rookie.

Plus, the arsenal here is fantastic. I’d like to see Gilbert throw his fastball (61.2%) slightly less, but it’s been a pitch with excellent vertical movement (1.2 inches more than average) that misses a decent amount of bats in the zone (20%). From there, he also features a wipe-out slider (39.5%), and a changeup that I’d like to focus on more.

See, with a .470 wOBA allowed on his changeup, you’d figure Gilbert lacks that third pitch that is needed in a standard arsenal. Actually, that’s not the case. In fact, it’s a fantastic pitch. Not only it inducing a whiff on 57.1% on the swing against it, but a 66.7% ground ball rate as well. Really, the reason behind Gilbert’s poor wOBA is this; it’s resulted in an out or hit just 21 times, so one bad outcome can skew the numbers quite a bit. On August 21st, Gilbert hung a changeup to Astros slugger Yordan Alvarez, leading to this home run.

Yet, at just 354 feet and under 100 MPH, I’m sure that was the epitome of a typical home run; with such a small sample size, the difference between this being a home run or a fly out completely skews the results. Instead of looking at the wOBA on the changeup, trust the whiff rate and ground ball rate- it’s an effective pitch.

Did I mention the changeup has a 15.6 MPH velocity separation from his fastball, while he also mixes in a curveball with a 20 MPH velocity separation? Gilbert has a complete four-pitch arsenal to miss bats, and the command to limit walks. Meanwhile, he’s also going to benefit by playing in one of the most pitcher-friendly stadiums, and his 30.5% under means he’s likely to run a lower HR/FB rate than expected, allowing him to outperform his xFIP.

There are no concerns about Gilbert’s durability/future as a starting pitcher, and I think it’s pretty clear he’s going to be effective. If an ERA skewed by a 67% strand rate is enough for someone who rosters him to get nervous, then take full advantage! It’s rare that you have an opportunity to land a future frontline starter, so when it comes, don’t miss out on it.

No, not THAT P. Sandoval! Trust me, I too had to look twice when I first saw Patrick Sandoval listed in the Angels’ roster to start the season to not confuse him with Pablo Sandoval. However, at this point, I don’t think there’s going to be anyone mistaking him for someone else anytime soon?

You might be familiar with Sandoval from his near-perfect game in Minnesota, but there’s much more to like with him than that. When you look specifically since he was inserted into the starting rotation in June, Sandoval has posted a 3.56 ERA in 65.2 innings for the Angels, supporting that with a 28.4% strikeout rate and 3.79 SIERA. Sadly, he hasn’t pitched since August 13th due to a back injury, but it’s safe to say he had an encouraging first season in the MLB.

The real question, though, is if this is sustainable moving forward. While some may be skeptical, I don’t see why he can’t continue to perform at a high level. For starters, he had been relatively productive (4.38 SIERA) in his first 70 MLB innings prior to this season, and also consistently struck batters out in the minors. This made him a “sleeper” candidate for me coming into the year, but there was more to unlocking his full potential than that.

See, Sandoval isn’t someone with a great fastball. Both his 4-seamer and sinker don’t rate out well in terms of movement, have been hit extremely hard, and aren’t located particularly well. Thus, for him to succeed, it was going to have to be in unconventional fashion: 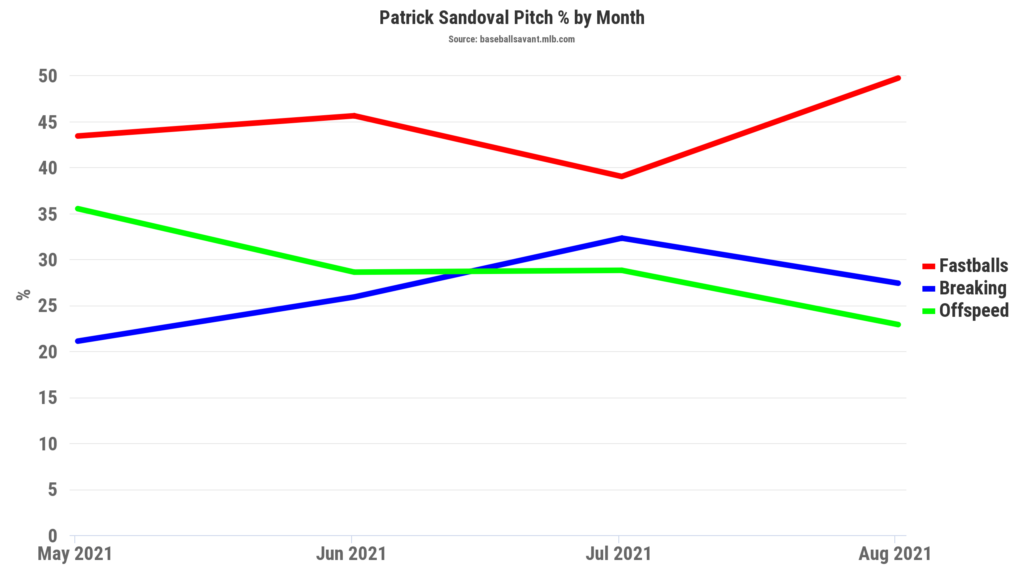 Ignore August, which consisted of just 46 plate appearances. Rather, the pitch arsenal in July is what to focus on. Whereas Sandoval’s fastballs aren’t of great quality, he has two fantastic pitches in his slider (38.3% whiff) and changeup (51.4% whiff). Throwing his two fastballs under 40%, and instead leaning on his two premier off-speed pitches, appears to be his path to success. For what it’s worth, during this span, he posted a 30.6% strikeout rate, as to be expected when you’re throwing your best pitches the most.

Sandoval not only misses a lot of bats (33.9% whiff), but he also induces ground balls at an impressive 51.1% rate, which limits the power production he’ll allow. Yes, the walks (9.9%) are a concern, yet when you’re striking batters out and limiting power, you can overcome a slightly high walk rate. A few months ago, Sandoval would’ve been difficult to target. After not eclipsing 100 innings pitched de to the injury, however, it’s possible the buzz around him has faded a bit. If you anticipate this being the case, make sure to target the 24-year-old, who, most importantly, maintains there is one “P.Sandoval” still flourishing in the majors!

As we discussed with the hitter portion of this series with Brendan Rodgers, I’m a sucker for former top prospects being discounted too early, only to develop exactly into the player he was expected to be. Hopefully, this is exactly what is happening with Triston McKenzie.

Through 2019, McKenzie was seen as one of the better pitching prospects in the sport, and it was easy to see why. He may have missed the entire 2019 season due to injury, but his production (29.4% K, 7.8% BB) was tremendous in High-A and Double-A, especially considering he was way younger than the average player at each level. Then, came his MLB debut in 2020, where he struck out 33.1% of the batters he faced and walked just 7.1% of them; he was blossoming into the frontline starter Cleveland had envisioned him being.

Yet, as we’ve become familiar with, progression isn’t linear. Through June, McKenzie continued to strike batters out an a terrific (31.2% K) rate, but shockingly walked 20.6% of them, in addition to allowing 1.7 home runs per nine innings. This all led to a 6.38 ERA and 5.32 SIERA, forcing him to be sent down to Triple-A multiple times, where the results weren’t much better (13.2% BB).

However, that didn’t stop Cleveland from giving McKenzie another chance back up at the MLB level on July 9- they’re heavily invested in his development. As it turns out, that was the perfect decision to make. Since being re-promoted to the majors, McKenzie is striking out 26.5% of batters, but, most importantly, is only walking 4.4% of them. In other words, he essentially went back to being the pitcher many expected him to be heading into the season. What a world we live in!

So, what changed for McKenzie? It all starts with his fastball velocity: 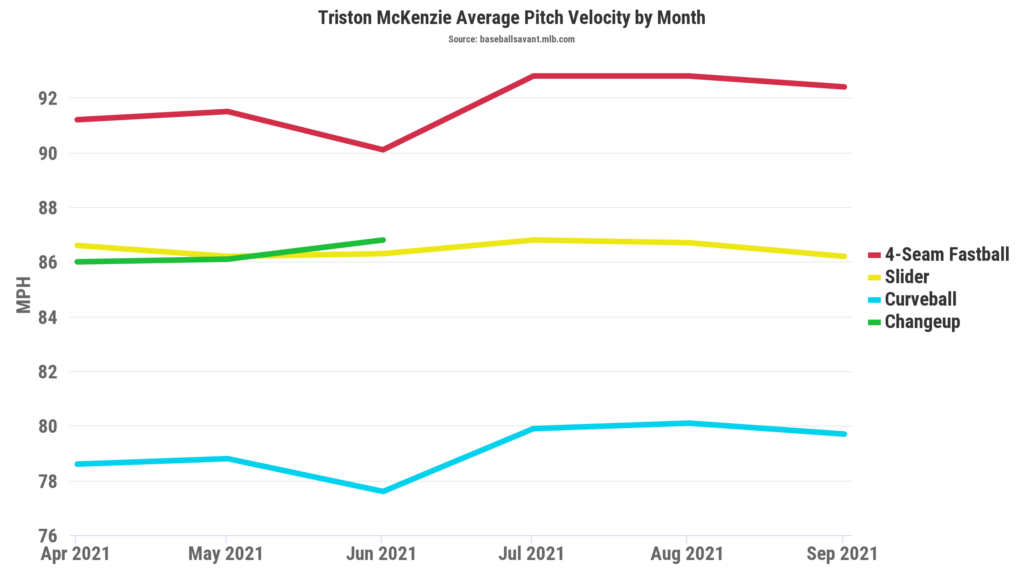 In 2020, McKenzie’s fastball sat at 92.8 MPH, but it was closer to 91 MPH for the first half of the 2021 season. All of a sudden, though, he’s recaptured that magic, and it’s had a major domino effect. Take a gander at how much he’s attacked the zone since the velocity bump occurred: 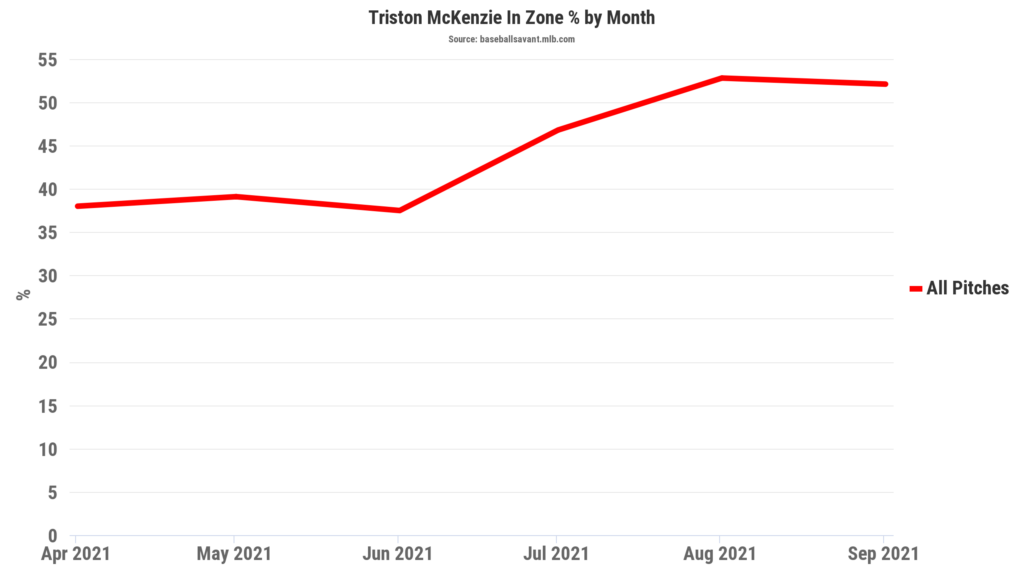 That explains the walks, which had never been a problem for him previously. The fastball also isn’t been hit as hard anymore, and he’s allowing far fewer barrels (8.1%) than the beginning of the year (14.3%). McKenzie may have had a strange blip to start the year, but he’s now back in full force. Remember, this was one of the top pitching prospects for a reason! Still incredibly young after just turning 24-years-old, all signs are pointing towards a very bright future for McKenzie from here. While the taint of his beginning of the season impacts his 2021 statistics and future projections, this is the ultimate time to look to acquire him!

In dynasty leagues, it’s always important to identify young, undervalued players that can be a key part of your team moving forward. Whether you’re a contending team or a retooling team, these three pitchers can add value either as contributors for next year, or long-term pieces to build around. All of them have strikeout-inducing arsenals,, have a proven track record of success, and are all 25-years-old or younger. Right when the offseason starts, make sure to try to acquire them!