The Top NHL Prospects For Your Dynasty Hockey Team 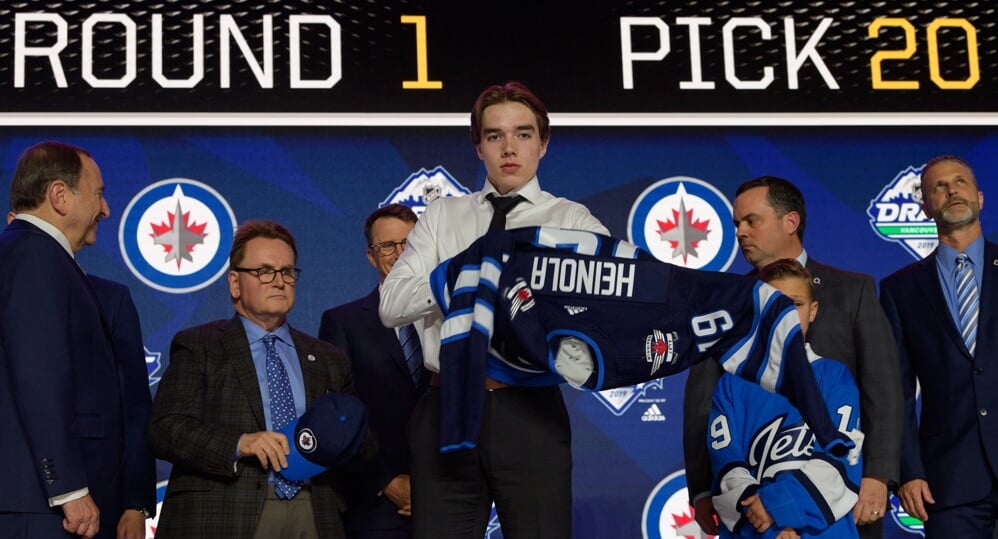 Hi everyone, welcome to our most anticipated column of the year! Today we are diving into a distinct group of the top drafted NHL prospects, a group that provides massive upside to your fantasy team. A precursor though, because we can’t go any further without stating: these players fit a certain criterion. These 10 prospects are all 1st round players who have played more than 10 games thus far. We took the top 10 NHL prospects following these filters from the Fantalytica prospect platform. If Zegras and Byfield were playing in any league other than the AHL, they’d have been here too. I know you’re excited to read it, so let’s cut the chatter and jump right in.

Top NHL Prospects For Next Year 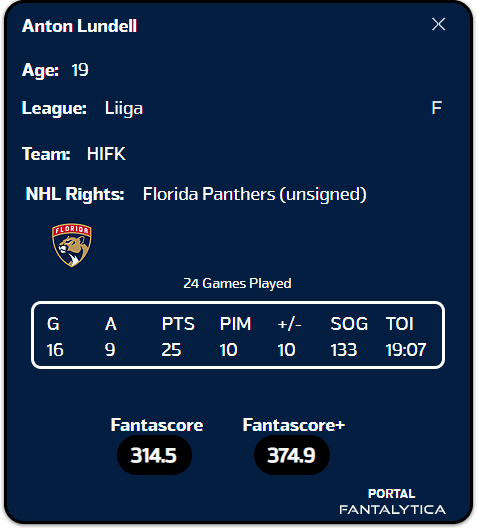 Anton Lundell was a prospect who, as little as two years ago, was considered the 4th best prospect of the 2020 NHL Draft. In terms of statistical comparisons, there weren’t any. A fellow Finn, Jesperi Kotkaniemi went 3rd overall the year prior, having a less impressive season relative to Lundell’s draft year.

To have Lundell fall to 12, we’re extremely confident that Florida had an internal explosion of excitement. Just like the Panther’s management, you should take a good hard look at Lundell for your fantasy team’s future. He has erupted this season, and after correcting much of his skating stride, Lundell could be set to take the Calder next year. Yes, the Calder.

Considering the competition of the Liiga and the number of games played, Lundell has a significant lead ahead of the other top prospects for the year on this list. Pick him in all drafts you may participate in – it’s mandatory. 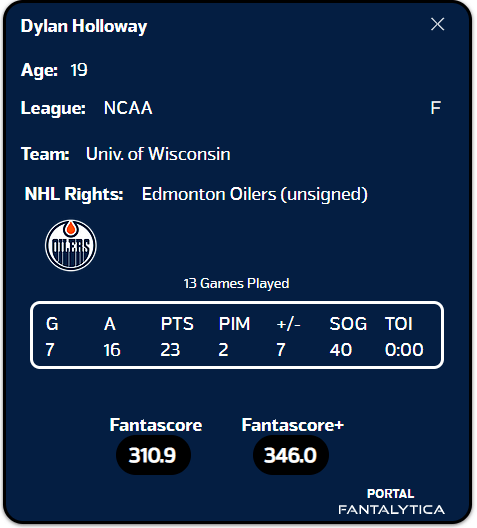 It took a bit longer for Holloway to land on our algorithms… Solely from having to catch up after missing some games early on in the year for Wisconsin. Holloway was a solid pick for Ken Holland and the Oilers. For all of you Oiler fans, your team didn’t miss. Not one bit.

He’s the complete package for a fantasy team. He can score, thread needles in tight quarters, contribute to peripherals, and of course fire pucks on a nightly basis. Although Holloway provides individual value, the true opportunity is playing with McDavid or Draisaitl. Just look at Kailer Yammamoto!

Not to denounce anything from Kailer, but Holloway frankly has a better kit. Combine that with some power-play time next to Connor and Leon and you, my friend, have a steal on your hands. 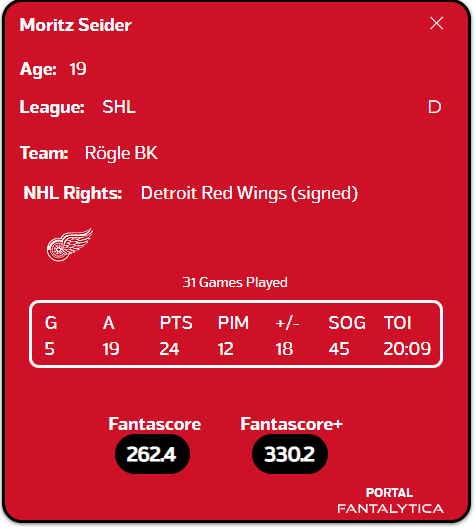 The German Nicklas Lidstrom – according to every Red Wing fan. It’s a considerable expectation – after seeing his performance in a greater league, the SHL, Seider has been in highlight reels weekly. He crushes skulls on the ice EVERY night.

He can manage important minutes for his team, distribute the puck in a timely fashion, and transport the puck into the offensive zone with minimal help. Yzerman seemed to have a firm grasp coming into his first draft as the Red Wing’s GM. For the public, Seider was a reach, but not for Stevey Y. If your fantasy team is in need of a stalwart on the backend, look no further than Seider. He’ll do everything for you. 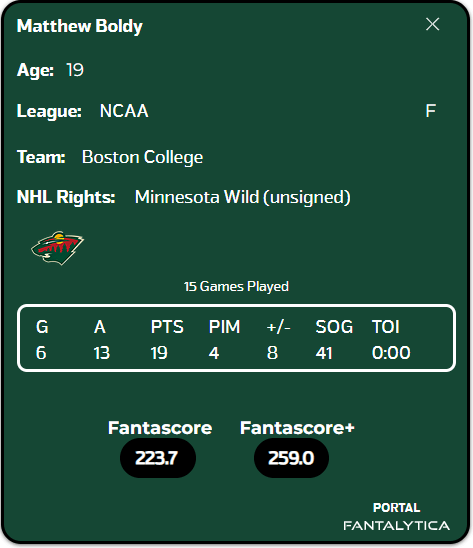 It took him a year to get his feet wet in the NCAA. It sort of felt like #HockeyTwitter was writing him off already. He fell into the cracks when it came time for yearly prospect rankings. He must participate in fantasy hockey too, because after seeing his name omitted he chose to prove the doubters wrong.

After finding his stride playing for Boston College, Boldy looks poised to conclude his NCAA season on a high note. Its important to note that Boldy can absolutely keep up with the NHL’s speed and pace. He’s another dream in the making. Imagine Kaprizov and Boldy juggling the puck between the half walls on a powerplay. Boldy is big time, don’t overlook him for your team. 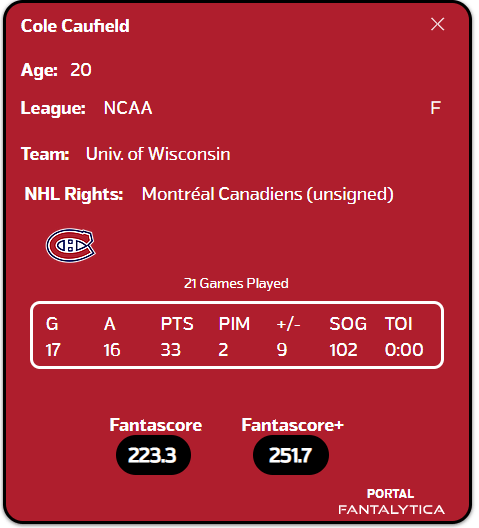 The Hab’s boy wonder. At this point, it may seem hard to envision where Caufield fits into the current Montreal lineup. Although the Habs are absolutely stacked up front, Caufield will realistically have no problems finding a spot there. It will take approximately 1 practice for the coaching staff to etch his name onto PP1.

I could see Caufield being the biggest steal from this list in terms of fantasy output. Just think of Alex Ovechkin without the hits (fantasy). I can’t stress enough how important and well thought out Montreal management’s decision was to let Caufield play a 2nd year in the NCAA.

He has found a groove playing with Holloway on Wisconsin – he has also managed to find his playmaking abilities at a higher level. Lets also point out the elephant in the room: 102 shots in 21 games is jaw-droppingly impressive. Remember passing on Debrincat for your fantasy team? Let’s not do that again, okay? 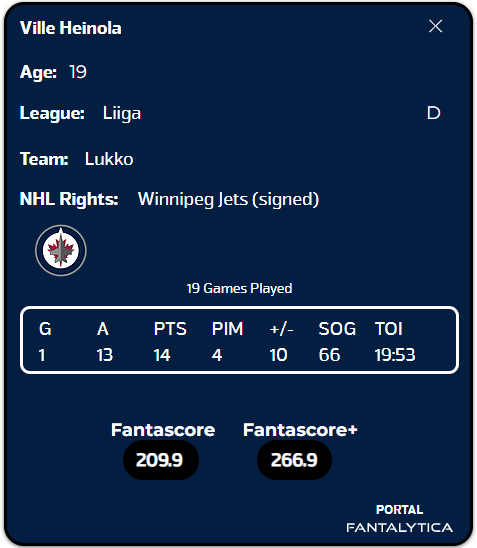 Jets fans had a sick feeling in their stomach the day Trouba left town. I suppose a good consolation prize was an improved Neal Pionk. The real winner of this trade is the Jets grabbing Heinola. Heinola has impressive awareness across all 3 zones. He’s a future PP1 quarterback who will log heavy minutes, just like Seider.

Heinola will need to find a way to play the game like John Klingberg. Klingberg isn’t known as a physical player, and neither is Heinola. I have no reservations to consider Heinola producing around 60 points a year. If Tony DeAngelo got close to 60, so could Heinola. Expect Heinola to produce massive volumes of shots and assists once he finds a permanent spot in the Jets’ lineup. 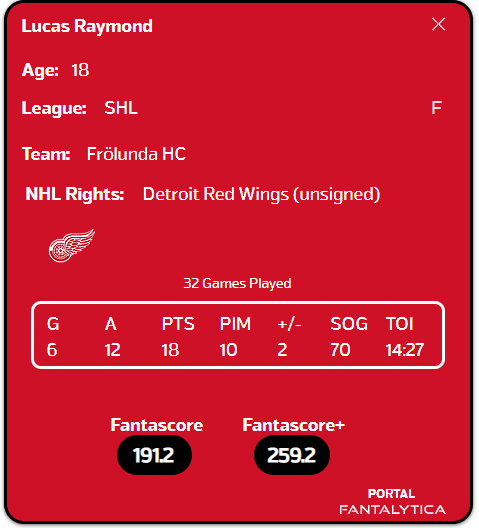 We’ll call Raymond Thing 1. What Thing 1 does on the ice is special. To be a prospect that already makes grown men always require his whereabouts says a lot. His methodical approach to the game converts to fantasy output, guaranteed.

A careful consideration for any dynasty team owner has to include a prospect’s environment, organizationally speaking. Thing 1 is the most coveted forward prospect in an organization dire for elite skill. The Red Wings will die on a hill before limiting Thing 1’s maximum potential. Let that be a contributing factor in acquiring Raymond. 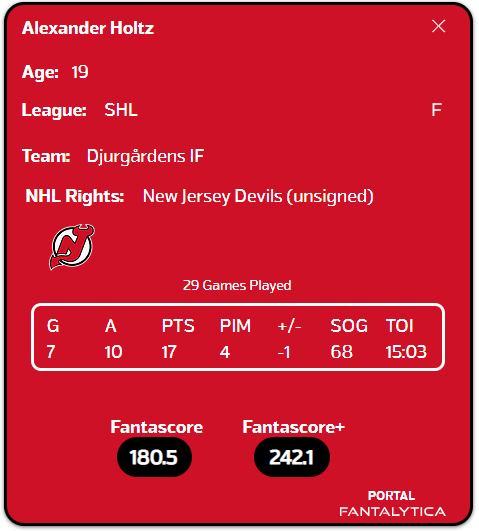 Ah, Thing 2! You saw this coming, right? Holtz has massive upside for your fantasy team. Case closed. Think of a taller European version of Cole Caufield. Thing 2 shoots the puck anytime and anywhere on the ice. Insert Jack Hughes, and you have a potential 50 goal scorer on your hands.

We like to go big or go home on our platform, so its no surprise that we have high hopes for him. Like the Red Wing’s, the New Jersey Devils need a guy like Holtz to come in and elevate expectations. I guess that’s why they drafted him. Maybe you should too. 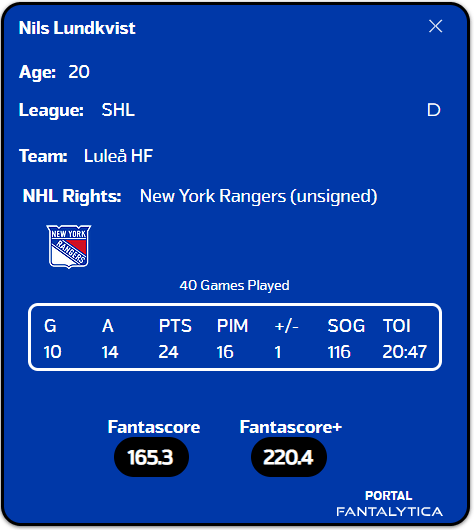 As if the New York Rangers weren’t already stacked enough on the blueline, Lundkvist has grown into a capable, transitional, intelligent, productive defenseman. It’s really hard to imagine Lundkvist knocking anyone in the Ranger’s Top-4 down to the bottom pair, but to say it’s a realistic expectation is reasonable.

To put it bluntly, he’s just really good. He brings so much to the Rangers and will absolutely bring a lot to your fantasy team. I guess it’s fair to say that both the Rangers and the Jets are content with their future PP1 blueline prospects. 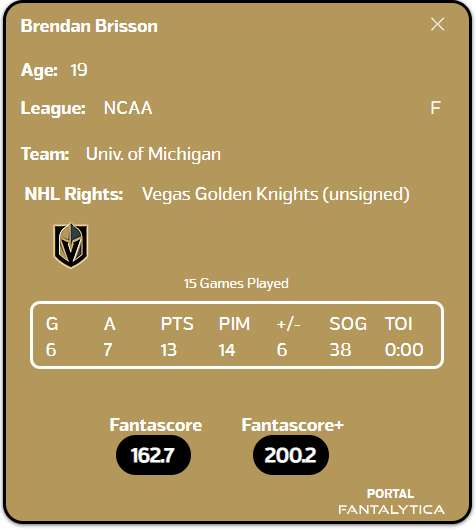 Last but surely not least, Brendan Brisson has willed his way onto this list. He’s been publicly overlooked by all fans except Golden Knight fans this year, due largely in part by a historic Wolverine roster. The media cannot stop talking about Owen Power and Kent Johnson, but the true story is on Brisson.

The strengths of Brisson’s game can translate to the NHL, barring any injuries or categoric setbacks (like the Knights acquiring another Mark Stone type player). Of all the guys on this list, Brisson may be the least valuable player in terms of fantasy. Let me explain – Brisson is not a big flashy player who has made headlines for years, he’s just a prospect capable of having a solid 15 year career in the NHL.

How could a dynasty team owner not want that? The only problem with acquiring Brisson is… Well, his current owner won’t like moving him. Take that for what it’s worth.

Thanks for reading our top prospects list! If you enjoyed these projections or descriptions, please be sure to check out the platform at Fantalytica.

With Fantalytica meeting all your prospect needs, now check out Mark Hillier’s Week 5 Goalie Streams to find some help behind the net.