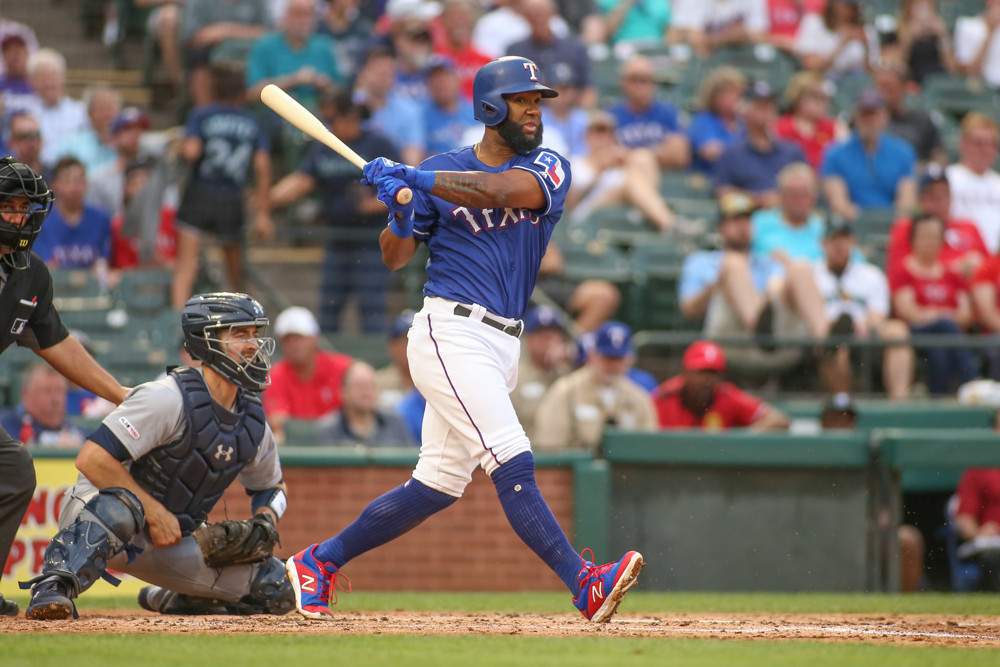 Every year we draft our teams and look at our rosters with pride, thinking our teams should be competitive with a real chance at winning a fantasy championship. If championships were won at the draft, I’d be win-less. Truth be told, every year I look back at draft results and think, woof, did I mess up there. However, there’s more to roster building than the draft, as playing the waiver wire is just as important as drafting a good team. Making a key pickup or holding on to the right bench stash could be pivotal in winning a title. The following list contains some bench and part-time players that would benefit from more playing time due to trade or injury and could provide good value in leagues deeper than your standard 12-team setups.

We’re almost halfway through the MLB season! Get crazy and add that “one more league!” You can start a league at Fantrax.com 364 days a year.

Texas Rangers utility man Danny Santana has logged games at 1B, 2B, SS, and all three outfield positions due to various injuries to the Rangers’ regulars throughout the season. In 54 games, Santana sports a slash line of .309/.347/.536 with eight home runs, nine steals, 36 RBI, and 24 runs scored. Those numbers extrapolate to 24 home runs, 27 steals, 108 RBI, and 72 runs scored over a full 162 games. While a .390 BABIP may not be sustainable, a 44.3% hard-hit rate to go along with a 29% line drive rate and 80th percentile sprint speed also play into a good batting average. The speed, power, and average potential make Danny Santana one of the better bench stashes going into the second half of the season.

Much like Danny Santana, Washington National Howie Kendrick is capable of playing just about every position in the infield, having played over 10 games at 1B, 2B, and 3B.  Kendrick is enjoying a late-career resurgence with a .328/.381/.575 slash line and 12 home runs in 64 games. Always capable of hitting for a good average, Kendrick seems to be taking advantage of the live ball, as the 12 home runs he has hit to this point are the most he’s hit since hitting 13 with the Los Angeles Angels in 2013. A 7.6% walk rate and 13.3% strikeout rate also show an improvement in plate discipline this season. That improved discipline, paired with a .325 BABIP, gives me no reason to believe Kendrick can’t sustain what he has done this year. With eligibility all over the field, Kendrick could be a valuable asset to any team if given everyday playing time.

Milwaukee Brewer Eric Thames is notorious for hitting home runs in bunches, with 10 on the year in only 44 games started. A 32.7% strikeout rate will make someone a streaky hitter. A .355 BABIP and platooning against right-handed pitching has actually helped Thames in achieving a .257 average. But a good average will never be what you expect from Thames. What Thames can do is get on base, with a 14.9% walk rate leading to a .376 OBP. If the Brewers decided to move on from Jesus Aguilar or an injury opened up more playing time for Thames, he’d be a good add in deep OBP leagues and could supply power in a good lineup.

Any time a player has the potential to play half of his games at Coors Field, they have to be on your radar. Rockies outfielder Raimel Tapia would be the next man up for a starting everyday role in the event of an injury to one of the Rockies regulars. While he doesn’t have great plate discipline, it’s easier to get away with when you have an 87th percentile sprint speed and play on a field that tends to boost BABIP.

Of Tapia’s 59 hits on the year, 25 of them have gone for extra bases including fifteen doubles, four triples, and six home runs to go along with three steals. Extra-base hits tend to play up in points leagues where you can get awarded for doubles and triples. And with his speed, Tapia would likely see plenty of time hitting at the top of the order. Tapia could be a bench stash that pays off if given the chance to play every day.

Atlanta Brave Johan Camargo had a good season in 2018, hitting .272/.349/.457 with 19 home runs in 134 games. The addition of Josh Donaldson shifted Camargo into a bench role, with only 134 plate appearances this season. Camargo has the ability to play the outfield as well, so the addition of Austin Riley wouldn’t necessarily block Camargo in the event of an injury to Donaldson.

The Braves have been one of the best offenses in the league, so Camargo would benefit from counting stats with the hitters around him. Camargo’s underlying peripherals leave much to be desired with a dip in hard-hit rate and plate discipline, but some of that could be attributed to the lack of consistent at-bats for the young third baseman. Camargo should be on your radar as a bench stash that would benefit greatly if given the playing time, especially in deeper points leagues that utilize a corner infield position or five outfielders.

Cubs infielder David Bote has split time between second and third base, sporting a slash line of .258/.341/.460 with nine home runs and four stolen bases. Bote has shown an improvement in plate discipline, cutting his strikeout rate from 28.6% in 2018 to 23.9% this season and raising his walk rate from 9.0% to 10.6%. Bote has about the same number of plate appearances so far this season as he did last year and while his hard-hit rate and exit velocity are down so far, his launch angle is up considerably, which helps explain the jump in home runs from six last season to nine this year. If the 26-year-old Bote can continue to grow as a hitter, he could benefit greatly from everyday playing time in a good Cubs lineup.

Mark Canha has seen time at first base, outfield, and DH this season, getting most of his playing time filling in for Khris Davis. Canha has 10 home runs in 159 plate appearances and has shown an excellent approach at the plate with a 15.1% walk rate and a 19.5% strikeout rate. Despite a .227 average dragged down by a .213 BABIP, he sports a .365 on-base percentage. Another change Canha has made this season is his fly ball rate which is up to 54.5%. Pair that with a launch angle jumping from 15.5 degrees to 22.2, and good things should follow. Canha could be a bench stash capable of providing a decent source of power and OBP if given consistent playing time.

Astudillo makes this bench stash list by virtue of his catcher eligibility. The Minnesota Twins carry two other catchers in Mitch Garver and Jason Castro, and Garver has enjoyed a successful season, giving the Twins little reason to play Astudillo behind the plate. Instead, Astudillo has found playing time all around the diamond at every position with the exception of shortstop. Astudillo excels at making contact and very little else with a .271/.290/.395 slash line. His xBA of .299 highlights how well he makes contact, and a catcher capable of hitting for that kind of average should be owned once given any consistent volume of plate appearances. Should either one of Minnesota’s catchers go down with an injury, Astudillo could make sense as a pickup in two-catcher leagues or deep mixed leagues.

Perhaps one of the many surprises that came out of the slew of injuries the Yankees suffered early on was the success of Giovanny Urshela with a .303/.354/.458 slash line in 223 plate appearances. Like with many hitters this year, his hard hit rate jumped significantly from 21.2% last season with Toronto to a whopping 44.4%, and an excellent 25.4% line drive rate also plays well into a high batting average. The .304 expected batting average is right in line with his .303 actual average, showing that the skills Urshela has displayed this season have had little to do with luck.

The Yankees have been one of the top offenses in baseball, Urshela’s combined 65 runs and RBI in 64 games is an example of that. So if the injury bug bites the Yankees’ infield once again and Urshela finds himself in an everyday role, he could be a valuable bench stash that pays off.

It’s been known that the San Diego Padres outfield is a crowded one. And much speculation has been made about the possibility of the team moving a player via trade. While players like Franmil Reyes and Hunter Renfroe have garnered most of the attention and playing time, Margot seems to be the forgotten man. The 24-year-old Margot flashed the kind of potential he is capable of in 2017 when he hit .263 with 13 home runs and 17 steals but seems to have hit a wall in his development, showing little growth over the last year and a half.

This season, Margot has three home runs and nine steals in 179 plate appearances. I believe Margot could still be an asset to fantasy teams, particularly in deep roto leagues where his speed would be most valuable. Where Margot has improved is on the basepaths, where he has yet to be caught stealing in nine attempts. That kind of speed potential should not go ignored. If a move is made that opens up time for Margot, either with the Padres or elsewhere, he could be one of the more worthy bench stashes to help you in winning your leagues.

This is Jorge’s debut article for FantraxHQ. For more of his take make sure to follow him on Twitter @Jmontanez.