The Prospect of the Hour: Triston Casas 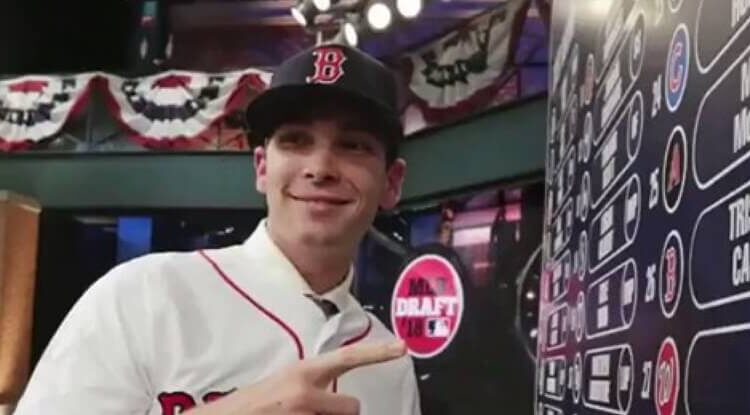 The Red Sox have gone through a rough stretch in their farm system. For a few years now, it has been among the worst in all of baseball. That will happen when you graduate and trade away pieces to build the championship-caliber teams they have had in recent history. But as things stand the Red Sox are not a competitive team but their farm system has begun to be inserted with interesting prospects, none more interesting than Triston Casas. Casas is the best prospect in the entire system thanks to his mix of power, ability to draw a walk and make enough contact.

Who is Triston Casas?

Casas has been the talk of prospect Twitter lately because the Red Sox have allowed us to see what is going at their Alternate Site. Triston Casas (thank you to @redsoxstats for this video) is constantly crushing pitches in every video we see of him. For my money, he is arguably the second-best first-base prospect in the minors because of his prodigious power. That’s why we are here, to talk about Triston Casas and his value throughout the dynasty baseball landscape.

I do view Casas as not only the best prospect in the Sox system but also among the best first-base prospects in all the land. He posses double-plus raw power to go along with what should be an average hit tool. He posses enough bat-to-ball ability to turn that raw power into game power. The former 26th overall pick back in 2018 also has a keen eye at the plate and will draw himself a walk, something I value highly in prospects. The power he has shown in the alternate site is no joke and he started to show us the power in 2019.

Back in 2019, during Triston Casas’ first taste of full-season ball, all affiliates either A or higher, he showed that the power he displayed in the showcases was legit. He smashed 19 homers in 493 plate appearances at the A-ball level while hitting .254/.349/.472. He showed a keen eye at the plate walking 11.8% of the time and only striking out in 23.5% of his plate appearances. These numbers are encouraging especially when you realize that he was 19 at the time. In 2020 however, he probably won’t play an official game but he is still showing the power that makes him such a valuable dynasty prospect.

In the dynasty landscape, we are all looking for the next star and Casas has that potential, whether he hits that is a different topic, because of his power. The first base landscape is rough. The star first-basemen, outside of Freddie Freeman, we have drafted in years past are beginning to age out of their primes. So it would make sense, especially if you have one of these aging first-baseman who starred in the past, to start to develop a contingency plan. Outside of Spencer Torkelson, Triston Casas is the best contingency plan there is. Casas provides the most important thing you want from your first baseman and that is power. He might have some of the highest grades for power in all the minors.

I acknowledge that for many owning a first-base prospect seems less than ideal, but Casas is worth being a part of your minor league system in any keeper or dynasty league setting. He’s 20 years old and putting on a show at the alternate site against pitchers who are on the verge of making the major leagues. This is an experience that will show up and is just as valuable as what he would have gotten in High-A, if not more valuable.

I guess we have made it this far without me talking about what I expect him to become. Triston Casas is a guy that we can expect to hit for power and a decent amount of it. I believe there are 30-homer seasons in there; he exhibits that kind of power. I talked about the 19 homers he hit in A-ball but, according to Fangraphs, he has a max exit velocity of 107 MPH. What this helps us do is paint a picture of what he can be, because he is only 20. The Red Sox farmhand can be a guy that mashes the ball, which will help him everywhere. He also will draw his fair share of walks and be selective at the plate. He will make enough contact to get to his power but never post fantastic batting averages.

In OBP formats Casas will be even more valuable, let’s just all agree OBP leagues are so much better than batting average leagues., because of his pitch recognition and strike-zone recognition. There is a level of safety with guys who draw walks and that adds to the profile, which is why I harp on it. Triston Casas could be a star in OBP formats because of what I alluded to earlier. Throw in the power and there is a chance for a high OBP first baseman who hits 30-35 homers in the American League East.

His value in dynasty baseball is starting to pick up, and I would implore you to start reaching out to trade for the young Sox slugger. He has what it takes to be a fantasy stud combining near the top of the scale power with the ability to draw a walk. Few in the minors have the type of power he does, and I would value him as a top 50 dynasty prospect going forward if you have him. He has a chance to take off in 2021 and this offseason you should buy the future Sox star.

*Thank you to @redsoxstats for the video of Triston Casas