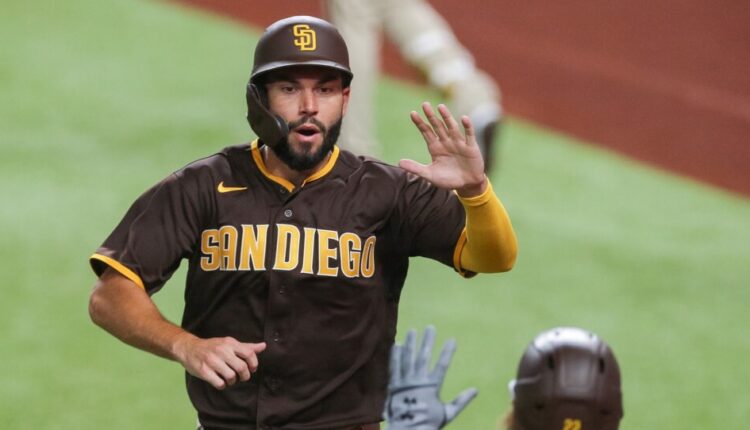 Nic Civale is a Doctor of Physical Therapy and former NCAA Division I Baseball athlete. He combines his knowledge of anatomy and physiology with that of baseball mechanics to provide expectations for players on, or coming off of, the Injured List. Utilize The Fantasy Baseball Injury Report to manage your fantasy team’s injuries and emerge victorious amidst the chaos!

The Hosmer injury is a tough pill to swallow for many fantasy owners, as he sustained a fractured left index finger while trying to bunt with two strikes against Kyle Freeland on 9/7. To make matters worse, the ball also got a piece of the bat and he struck out; double whammy. Hosmer was in the midst of a resurgent season after finally acknowledging launch angle metrics and drastically improving his fly-ball rate. The grounds crew responsible for maintaining the San Diego infield grass must be just as thrilled as you and me!

The Padres 1B was initially given the broad range of 2-6 weeks for return, but it’s beginning to look more like 2-3 with Hosmer already taking ground balls and standing in on live pitching. He is reportedly hoping to begin workouts at the alternate site sometime this week.

The Athletics star 3B and perennial gold glove candidate is officially out for the season, sadly, with a torn labrum of the right hip. This was first reported by the San Francisco Chronicle. Surgery will be performed, but it is unclear the extent of the damage done to the labrum. Normal return to sport after labrum surgery can range from 4-6 months. Chapman will likely spend a week or two after surgery on crutches, with physical therapy for strengthening, range of motion and balance to follow. If all goes well, we should expect to see Chapman at spring training next year ready to return to the hot corner in Oakland.

JT Realmuto and Rhys Hoskins have been out since Sunday with a sore hip and sore left forearm, respectively. Both are requiring MRI’s and more information will be provided later in the week, but the positive news was that Hoskins’ X-Ray came back negative. The Phillies are entrenched in a tight NL playoff race and need as much help as they can get offensively to remain in the hunt. Both players remain day-to-day which is a good sign, hopefully avoiding the IL.

The 30-year-old Altuve has had a down year for his standards, displaying a .224 average with only 3 homers and 2 steals. Regardless, he remains an appealing name to playoff rosters due to his extensive pedigree and spot in a powerful lineup. He is expected to return from his short stint on the IL this Tuesday against the Rangers. Jose was sidelined for right knee soreness after an awkward slide into third. He’s had right knee issues and surgery in the past, but it appears this issue was minor; he has been performing baseball activities the past few days and has shown he’s ready to go.

The Blue Jays are firmly in playoff contention, and their hottest hitter throughout the year has been Hernandez. There is no definite timetable for return from his left oblique strain, but with many fantasy leagues beginning their playoffs this week owners should keep an eye on reports this week on a potential return. Initial reports were scary, suggesting he may miss significant time. But Teoscar has begun hitting off a tee this past weekend which is an excellent sign for a possible Pre-MLB playoffs return.

Soler may have difficulty returning to full strength as a major home run threat in the next couple weeks for the fantasy playoffs. He was placed on the 10-day IL on 9/8 for a right oblique strain. Unlike Teoscar Hernandez, Jorge has not yet returned to swinging or tee work. With the Royals unlikely to make a playoff push, it would be hard to imagine they’d rush their slugger back onto the field.

Turner was sidelined with a left hamstring strain. He did not come back from the 10-day IL in the minimum time frame, but manager Dave Roberts stated be may return early this week. Be sure to check daily on Turner’s status for starting lineup decisions. It appears the strain has been minor and may have taken a couple of extra days to heal due to a HBP Turner sustained a few days prior to the injury on the same leg. Swelling in an area of a muscle strain can delay the healing process by restricting blood flow to the area. Turner is hitting a healthy .282 this year with 17 runs and 20 RBI’s in 117 AB’s.

One of the pleasant surprises of this season has been the outburst of offensive production from the Baltimore Orioles, thanks in part to Santander. He has been officially declared out for the season due to a right oblique strain. This injury should not have any lasting effects into next season, and we hope to see the slugger pick up where he left off heading into the 2021 season.

The versatile 2019 breakout has been placed on the 10-day IL due to left wrist inflammation. He has had a relatively disappointing season in terms of power and speed. There was no indication to a specific incident or game in which the inflammation started, usually meaning the onset was gradual. We can now wonder if this wrist injury was something plaguing Ketel throughout the year. Could that be a possible explanation for his power outages this year? What this tells me is that there may have been a reason for Ketel’s regression this year, and he may be a perfect buy-low dynasty option this off-season.

The Reds young utility man has returned from the Covid-19 restricted list and should be started globally as he has the potential to contribute in all 5 categories in standard 5 by 5 formats!

The Dodgers took a huge blow to their SP depth on Thursday when Walker Buehler hit the IL with recurring blister issues and Dustin May had to leave his start early after getting hit in the L foot with a batted ball. Manager, Dave Roberts has not given any clear indication of a plan for Buehler’s return. Dustin May had X-rays done on his foot, but they were inconclusive so we will need to wait for more information. The Dodgers have one goal this year, and that’s to win the whole thing. It’s possible these two young studs make it back to the mound before the fantasy season is over. However, expect them to be on a pitch/innings count so they are playoff ready.

Howard was added to the 10-day IL on 9/13 with right shoulder stiffness. No structural damage noted here, but he will be eligible to return with only a couple days left in the regular season. If Howard does return for the playoffs, he may be used in limited fashion. The Phillies will likely prioritize his future as a potential ace and be especially conservative with his shoulder.

Chris Paddack is day-to-day with a right ankle injury that occurred on 9/10 which forced him to exit his start in the 2nd inning. X-rays were negative and he was without a walking boot on Friday, which is excellent news. Despite his ratios and Statcast numbers taking a dip from his amazing rookie season, he remains a valuable piece on an up-and-coming Padres team. There haven’t been any indications of an IL stint to this point, so keep your eyes and ears open for Paddack news prior to 9/16, where he was initially slated to face the Dodgers at home.

Earlier this year, Jose Quintana sliced his hand on a wine glass while doing dishes. This was supposed to be the most unique injury of the year, but Zack Wheeler had other plans. The RHP for the Phillies somehow sustained a ripped fingernail on his throwing hand while zipping up his pants. He was scratched from his start Monday and remains day-to-day. The good news is, he felt good after a bullpen on 9/14. The bad news is; he will need to wear pants in the remainder of his starts; which puts him at risk for further nail-ripping incidents.

Mentioned previously in The IL Report and yet to return:

Stanton/Judge/Urshella– All 3 Yankees sluggers are expected at the alternate site to take at bats early this week. If things go as expected, the Yankees are going to get a lot scarier, very quickly. All three may be back as soon as this upcoming weekend.

Jake Odorizzi– has thrown up to 80 pitch sim-game. Possible to return mid-week

James Paxton– may not return this season. Soreness emerged after bullpen session Wednesday

Nate Pearson– reported to come back as a reliever if able to safely return.

KenGiles– has returned! Not necessarily in closer role

Salvador Perez– has returned! And is 7-for-14 with a homer in first 3 games back!

Hungry for more? Check out Chris Clegg’s article using Statcast data to inform you on four young arms to target in your dynasty and keeper leagues! https://www.fantraxhq.com/statcast-trends-dynasty-pitching-risers/