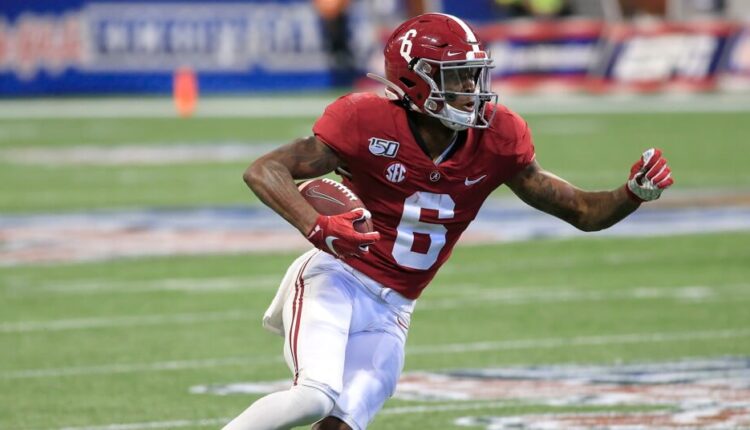 It is time to name the outstanding College Fantasy Football All-Americans in 2020. For the sixth year, I have assembled a team of CFF All-Americans for the Scholar’s College Fantasy Football Awards. It has been a tumultuous campaign, and early in the summer, we were not even assured of a college football season. Despite constant cancellations and schedule changes, CFF diehards endured and crossed the finish line of the regular season.

I asked some of the foremost CFF experts—Mike Bainbridge, Eric Froton, Nicholas Ian Allen, and the CFFInsiders—to join me and vote on their top three players in six categories. In 2020, I added two new honors (Dennis Pitta and Adrian Peterson Awards) for the past season. The results were totaled, and the elite fantasy performers in college football are listed below.

Typically, in College Fantasy Football, sorting out the best quarterback is not a difficult proposition. Not the case this year where we had 3-5 viable contenders with no standouts. Ohio State’s Justin Fields would have been a lock had the Buckeyes played a full season, but alas, he was limited to just five games with the condensed schedule and COVID cancellations. BYU’s Zach Wilson started out on a scorched Earth pace but tapered off late in the year.

I went with consistency for the entire season and landed on Florida QB Kyle Trask who averaged 32.6 fantasy points per game (FPPG) this season. Only ranked fifth in terms of points per game (PPG) average, but his reliability over the course of the year was unmatched. His low-point total was 22.5 points scored against Kentucky where he still threw for three TDs. Scored 30-plus fantasy points in six of the 10 games played this season. Topped 300-plus passing yards eight times. Higher ceilings with some other quarterbacks, but Trask never had a down week the entire season.

The Barry Sanders Award: The Fantastic Fantasy Running Back

The Barry Sanders Award for this season goes to a player, who not only carried fantasy teams to titles, but also his Cyclones to the Big 12 Title Game. Breece Hall finished the regular season with the most rushing yards nationally and finished in the top three in fantasy points, FPPG and rushing touchdowns. Hall narrowly edges out Najee Harris, who also finished the year among the nation’s best statistical running backs; nevertheless, based on preseason ADP and the comparison of talent around the two, it is Hall who gets the edge over Harris in my analysis.

The truncated 2020 season has produced an extremely competitive race for the coveted Desmond Howard Award that is bestowed upon the best CFF wide receiver in the land. In reviewing the candidates for this illustrious honor, three receivers separated themselves from everyone else.

Though Ole Miss wideout Elijah Moore ended the 2019 campaign in ignominious fashion, the undersize slot-machine (5’9” and 185pounds) thrived in new coach Lane Kiffin’s high-octane offense. He led the country in catch rate (85%) by securing 86-of-101 targets while dropping only two passes. His elusiveness was on full display every time he touched the ball as Moore dodged 18 tackles while achieving 55 first downs, good for third-most in the country. What makes his performance even more impressive, is he racked up 1,193 yards and eight touchdowns in only eight games, the least amount of appearances of the three Howard Award finalists.

Next up is North Texas’ aerial assassin Jaelon Darden, who finished second in the country in targets with 112 while dealing with the most unsettled quarterback situation of the finalists, as the Mean Green shuttled between Jason Bean and Austin Aune at various points in the year. No matter who was under center, Darden was the driving force behind the offense. He caught 74-of-112 targets (66%), led the nation in broken tackles with 22, and averaged a superb 7.7 yards after the catch. As if all that weren’t enough, he also finished second in the country in the vital Yards Per Route Run (YPRR) performance metric with 4.31, second to only Wake Forest star Jaquarii Roberson. The only knock on the lethal receiving weapon is that he left some production on the table by dropping seven passes for a still-respectable 8.6% drop rate. Even so, the touchdown machine racked up 1,190 yards and 19 touchdowns, which was far and away the most in the country.

Lastly is Alabama’s all-world Heisman contender, DeVonta Smith. While the Crimson Tide spread the ball around last season, their passing attack was a one-man show in 2020. DeVonta caught 83-of-106 passes (78%), the fourth-best catch-rate in the country in route to posting the third-highest yards after catch (8.3) of any receiver with 80 targets or more. He has hands like vice grips, putting just two catchable passes on the ground for a microscopic 2.4% drop rate. His YPRR average of 4.21 ranked third in the country, with no other receiver below him eclipsing the 4.00 YPRR threshold. His passer rating when targeted was a near-perfect 150.5, as the superstar led the nation in receiving with 1,327 yards and finished second with 16 total touchdowns.

With such a distinguished set of finalists to choose from, I cannot argue with any of my esteemed CFF colleagues on whichever of these fine receivers they selected for the Desmond Howard Award. If forced to choose one, I nominate DeVonta Smith. Moore only played eight games and had a 16-yard showing against Auburn, whereas Darden’s best performance came last week in an eight catch, 173-yard, four-touchdown explosion against UTEP that occurred after the CFF playoffs were already concluded. Smith’s worst game came last Saturday as Alabama took their foot off the gas against Arkansas with DeVonta only receiving four targets that he turned into just 22 yards. It’s as if coach Nick Saban knew the CFF Playoffs were over so he backed off the throttle in preparation for this Saturday’s SEC Championship game. Who ever said the Mayor of Munchkinland doesn’t have a heart?

I have two regrets that are college fantasy football related: First, I did not name a Top Fantasy Tight End six years ago, and second, I did not draft Kyle Pitts on any of my season-long CFF teams in 2020.

I rectified the former by adding the Dennis Pita Award and played the Florida star in my DFS lineups throughout the season. Pitta averaged a whopping 23.7 FPPG on 36 receptions for 641 yards and 11 touchdowns. Incredibly, he played in only seven games and still scored the most points at the position with 166.1 for the campaign.

It was a clean sweep among the voters for the Top Fantasy Tight End: Kyle Pitts received first-place votes on all of the ballots. After dominating the SEC, Pitts has risen up NFL Draft rankings, and I will miss watching the vivacious Gator on Saturdays next season. Fortuitously, he is now in the CFF record books as the first-ever recipient of the Dennis Pitta award.

The Adrian Peterson Award: Freshman of the Year

The 5’5” and 168-pound Texas native also caught 25 passes for 434 yards (both of which rank among the top five of all true freshmen regardless of position) and two scores as well. Vaughn rates as one of the Top 15 among running backs nationally in terms of overall points (187.6 in a full PPR league), and in the Top 50 FPPG—top 25 among players who participated in conferences that kicked off in September.

Only quarterbacks Jeff Sims (Georgia Tech, 212.44) and Pratt (199.92) posted more points as a true freshman in 2020, while Pitt receiver Jordan Addison (156.4) and Georgia Tech running back Jahmyr Gibbs (142.3) were the closest skill position players in terms of overall point production.

While Vaughn appeared to hit the freshman wall from Oct. 31 to Nov. 21, and though you may have missed out on his 33-point end-of-regular-season performance against Texas Dec. 5, the Wildcats’ runner may have helped win a championship for you with 27.1 points against Baylor (Dec. 28). He rambled for 102 yards and a touchdown and caught three passes for 19 yards and another score.

Eight players earned votes for the 2020 CFF MVP. No other award had as wide of a variety of opinions among the panelists this year. Even the winner, DeVonta Smith, did not earn a vote from one of the experts, but he did garner the most first place votes with three, earning 18 points.

At 6’1” and 175-pounds, Smith looks lean but he plays mean. He scored 318 fantasy points which trailed only Zach Wilson and Kyle Trask in college fantasy football. He produced over 30 fantasy points in six games, including three outings over 40.

The Crimson Tide speedster secured 83 passes for 1,327 yards and 15 receiving touchdowns. He toppled 200 yards receiving twice (LSU and Mississippi State) and recorded at least two touchdowns five times. Smith produced a season for the ages in college fantasy football and well worthy of being named the 2020 Red Grange Award winner. 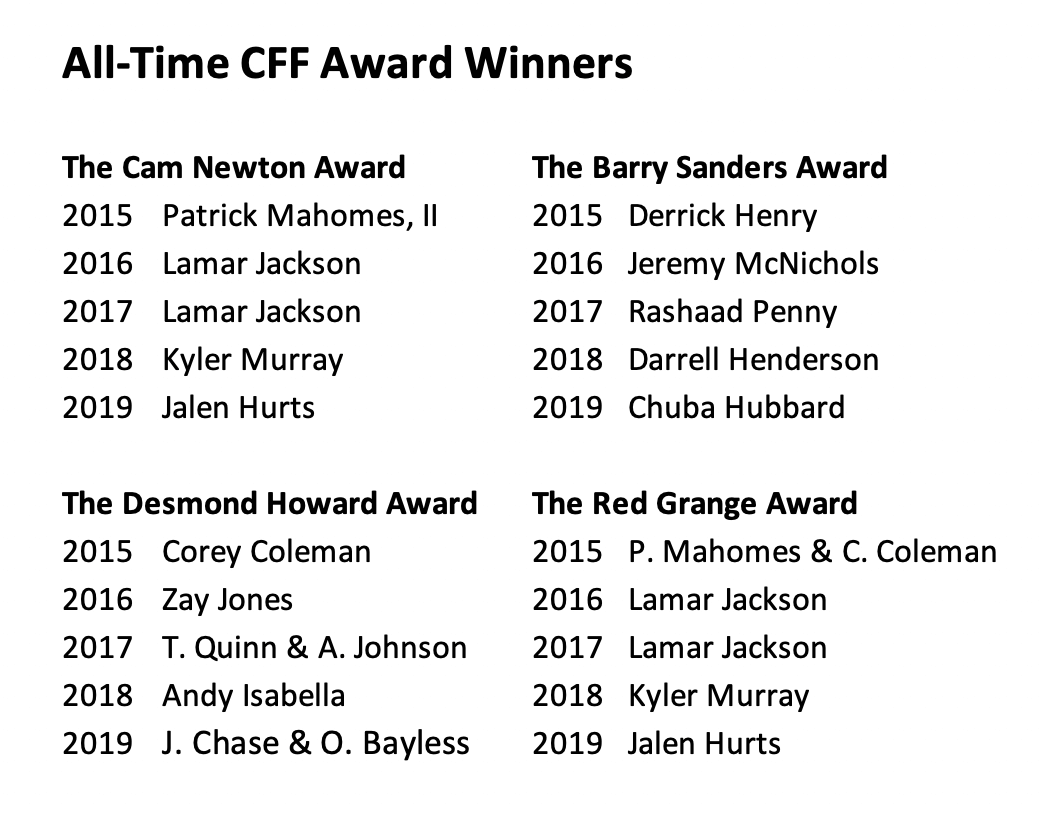