The Breakdown of Ross Stripling and Future Outlook 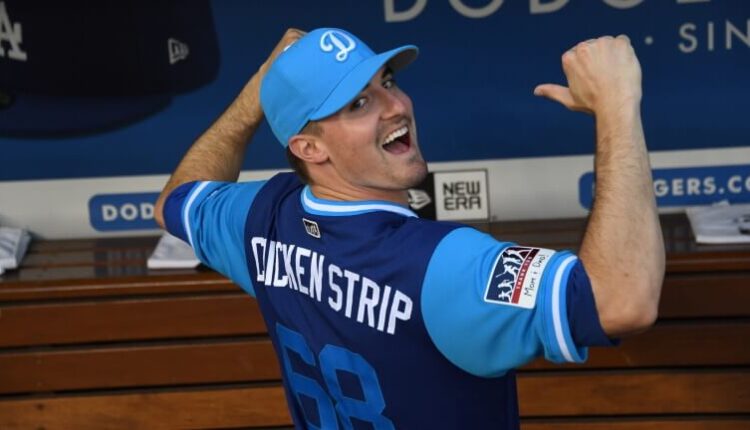 The year 2020 has been strange for all of us, including Ross Stripling. For instance, how many players know what it’s like to be traded twice in one year? Well, Ross Stripling knows-kinda. He was supposed to be packaged with Joc Pederson in a trade to the Angels until the deal was nixed. Stripling ended up remaining with the Dodgers for the time being and wound up in the starting rotation after David Price opted out of the season. Talk about an awkward beginning to an unusual season.

Several factors can affect a player’s performance. In this article, though, we will dive into what happened on the field for Ross Stripling. So let’s get at it!

Stripling’s season started out promising as he notched three wins in his first three starts. Those would be the only wins of his campaign and the season spiraled out of control soon after. Being yo-yo’d around between the starting rotation and bullpen is nothing new for Stripling, but pitching for the Blue Jays was definitely uncharted territory. The stat line below paints a bleak picture of how he performed.

Last season was quite uncharacteristic of Stripling, who holds a 3.77 ERA in 436.1 career innings pitched. The K-BB% plummeted to 10.0%, and the ground ball rate was only 39.9%. The performance is quite a head-scratcher to anyone expecting Ross to run away with a starting rotation spot during the spring season. The question is, what happened?

A bright spot to the season is Stripling found an additional 1.1-mph on his four-seam fastball. That is tremendous news as Stripling is not a flamethrower by any means. In 2019, he was at the 16th percentile in fastball velocity-however, the additional ticks brought him up to the 33rd percentile in 2020. Fastball velocity increase is usually a great indicator of pitch progression. 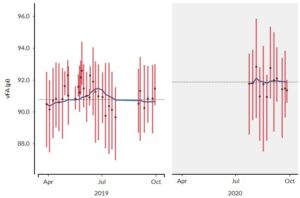 Before we get too excited about the rise in fastball velocity, it has to be stated that his four-seam fastball is a very poor pitch. His heater gave up 11 home runs in only 78 at-bats. To make matters worse, his command was all over the place too. Stripling’s 4SFB had a 12% walk rate with a measly 14% strikeout rate. Needless to say, this pitch is why the ERA and WHIP are so inflated. 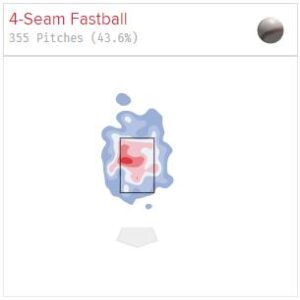 As you can see in the heatmap, the four-seamer catches way too much of the plate-especially at only 92-mph. Ross throws it nearly 44% of the time and gets hit as hard as it does? YIKES! He might need to consider dialing it back and focusing on his control.

Ross tinkered with the grip on his changeup. He pointed out that the grip is more like a “circle-change grip but with your fingers spread more out to put less pressure on the ring finger.” The good news here is that it appears Stripling was more comfortable throwing this pitch as he upped the usage quite a bit. The new changeup generated more strikes while also limited players from doing damage when put in play.

The curveball and slider gave way to the changeup as his leading strikeout pitch. From the chart below, you can see that both pitches get thrown in the zone a lot. This could explain the barrel rate being as high as they are. The curveball is a fixture in Stripling’s pitch mix. He throws it equally to a batter, regardless of handedness. His curve is a great weapon that induces tons of ground balls, and batters are not often productive when making contact.

His slider took a massive step back in 2020 and did not generate the usual amount of whiffs. Over the previous seasons, the usage continues to drop, and the pitch keeps getting clobbered by right-handed batters. This is particularly painful because Stripling throws it almost exclusively to RHB.

As we saw with the fastball, he leaves too much in the zone and pays the price by giving up home runs.  The curveball is a useful pitch that he must rely on heavily to get batters out. His slider is almost creating more harm than it’s worth lately. The changeup took a step forward and should be helpful in providing quality outings in 20201. This all adds up to a lack of strikeouts-because of that; Stripling is not a must-roster candidate.

Getting a middle of the rotation pitcher on a team that could win many games next year would have value. At an ADP is 461 and 184th pitcher off the board, Stripling is basically free. He only garners draft-day attention in deep format leagues with a larger bench. If you believe 2020 was just an unusual year for some players and looking for a bounceback play-Ross Stripling is a great option for you.

Jordan Montgomery is one of 2021’s Top Sleeper Starting Pitchers