We’re now over a week removed from the conclusion of The Great Fantasy Baseball Invitational drafts, and Twitter is no longer abuzz with recap picks and beating minor decisions to death. After digesting the results of all 13 drafts, this article synthesizes the data into the high-level trends and strategies put forth by industry experts. Along the way, I will point out interesting pieces of data for you to leverage in your drafts and even into your early-season waiver wire strategy.

First, let us start with the results of the drafts. The link below will direct you to the Google Doc with the full ADP report. The average draft position of every player selected in the 13 leagues, including the median pick, minimum and maximum pick number is included in the report.

Click here to view the full ADP report across all 13 leagues.

Next, I’d like to review the common draft strategies we saw from experts across the 13 leagues. We’ll start with some of the traditional draft approaches, and then dive into some unique approaches others took.

Wait on Pitching
Many believe you can wait on pitching until the mid rounds of the draft. Others swear that power is so abundant, a premium on pitching exists this year and you must acquire one of the top aces. I don’t pretend to have the perfect answer, but count me in the camp who believes the increase in power does little to shift the urgency of when to draft a slugger. Production is all relative, and as the image below demonstrates, home runs hit by qualified hitters have increased in each of the last three seasons, but the standard deviation has remained relatively constant. 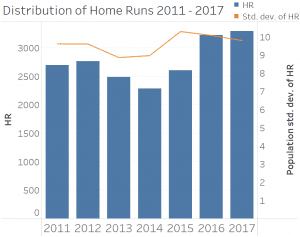 This means the distribution of home run hitters has declined slightly since last year, but the best hitters are still roughly the same number of standard deviations better than the mean. Only a sharp decline in home run standard deviation would prompt me to sit back and wait on premium power hitters, because I would feel comfortable knowing they are not significantly better than the options later in the draft. 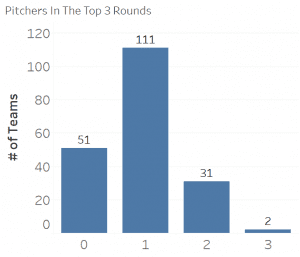 Pay attention to Andy Germani, Doug Thorburn, Oh The Humidity!, and Nate Grimm. These teams did a great job loading up on pitching and power profiles before pulling the trigger on Billy Hamilton. Even after the selection, players like Miguel Sano, Rafael Devers, Trevor Story, and a whole host of pitchers came as the next picks to Hamilton. That’s how to make drafting Billy Hamilton work — you need to plan in advance and avoid the “little-but-of-everything” players such as Corey Seager, Carlos Correa, Mookie Betts, Trea Turner, etc. These are excellent, excellent, players but you need to target players to better complement Billy Hamilton.

Players Beating ADP
The following list of players represents the group drafted significantly ahead of their NFBC ADP drop position. In other words, these are players the “experts” like significantly more than the larger public. I agree with almost all of the players on this list and think they represent a quality list of players worth reaching for in your drafts. Calhoun, DeShields, Zimmer, Miller, Albies, Devers, Grichuk, and Schwarber are some of my favorite high-upside plays later in the draft. 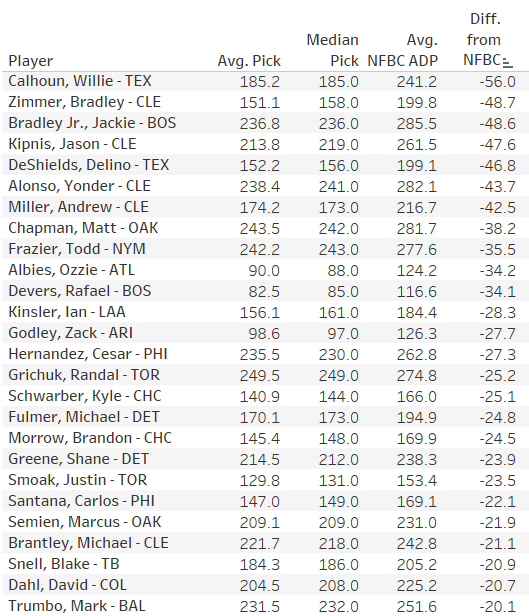 Players Lagging ADP
This list of players represents those going far later than their NFBC ADP. In other words, these are players the “experts” are down on. Some of these names aren’t surprising and are tied to injury issues — Ervin Santana, Danny Salazar, etc. — but others are tied to playing time concerns. Chris Owings (Ketel Marte), Javier Baez (Russell/Zobrist), Scooter Gennett (Nick Senzel), and Marwin Gonzalez (Kyle Tucker, and others) are all in potential timeshares or have a starting role threatened by up-and-comers. 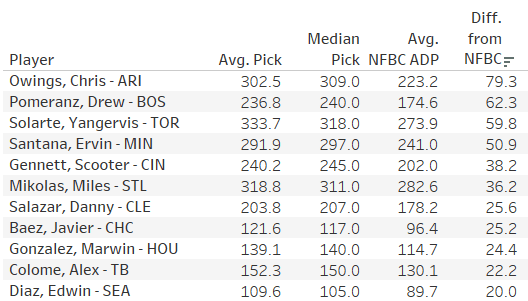 Polarizing Players
Catcher is the most polarizing position in the industry. Many are happy to sit back and take whatever falls to them at the last pick of the draft, while others feel the need to fill the position before moving on to their bench. This notion is reflected in the list below of players with the widest range of outcomes in draft position across the 13 leagues: 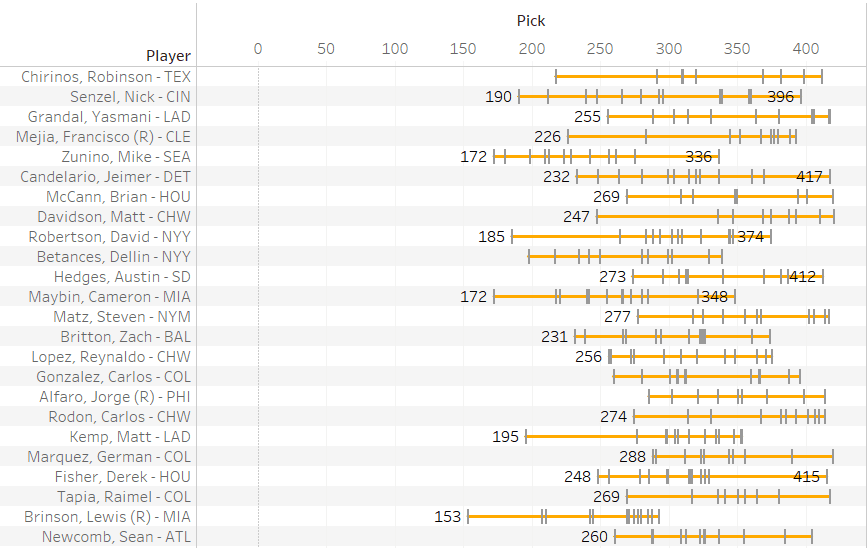 A few names worth mentioning:

Lewis Brinson – This is driven largely by one early pick at 153 overall, but Brinson represents one of the best low-risk, high-reward gambles in the draft. The opportunity is his and his power/speed combo could provide lucrative returns.

Sean Newcomb – Newcomb provides a ton of strikeout upside, and going outside the top 300 picks could return a ton of value. The uncertainty around his rotation spot is keeping his price down, but it won’t be long until he is solidly in the starting rotation.

Reynaldo Lopez – Overshadowed by Lucas Giolito and the other stud prospects in the system, Lopez might be the best White Sox prospect with regards to 2018 production. Opinions on him seem mixed, but I’d be happy to reach for him at the high end of his range in TGFBI.