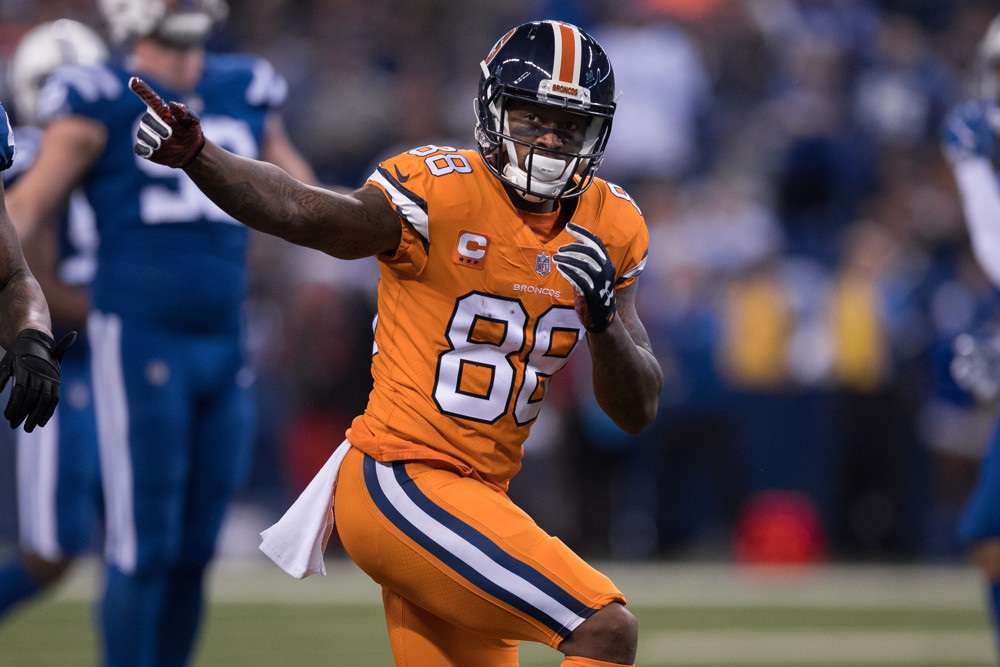 The fantasy football landscape is constantly in flux. Is determining the wide receiver target share the solution for exploiting this depressed commodity and how we can create a profitable situation. Supply and demand dictate the current market conditions which determines public perception. When supply for one product is greater than another market inefficiencies are created.

The wide receiver position has experienced a downturn in production and a re-calibration is necessary. If we deconstruct the characteristics for creating the hierarchy of the position we can better understand the attributes that are needed. If we simplify the process and concentrate on one category to decide which players can sustain their lofty status, who are the undervalued assets, while exposing regression candidates. For this exercise we will examine the target share or the percentage of targets a wide receiver amasses in an offense.

Let’s do an autopsy of last season’s wide receiver rankings and decipher the data.

This chart is a straightforward illustration of what is required to be a number one wide receiver in fantasy. Opportunity is everything; talent is tantalizing but volume is king!

Tyreek Hill is the outlier, electrifying and defies logic. Sixteen of his twenty career touchdowns have been from thirty yards or longer, including all eight (7 receiving & 1 punt return) last season. Tyreek should remain king of the Hill in Kansas City at the wide receiver position with catch rate above 70%, 2.35 Yards Per Route Run (6th) and 2.29 Fantasy Points Per Target (2nd)  in 2017. But with Pat Mahomes under center and the addition of Sammy Watkins via free agency, how does this effect Hill and his target share going forward? Or does it even matter in this unique case

The Lions offense produced two top-12 wide receivers last season but the odds are against either of Golden Tate or Marvin Jones returning to wide receiver one levels. Both are good receiver options, just not number one options at the position in fantasy and their average draft position reflects that. Tate is one of two players, Antonio Brown being the other with four consecutive 90 catch seasons. Mister Jones has been an effective player since arriving in Detroit but his target totals (103 and 107 ) over his last two seasons are unsustainable for retaining wide receiver one status. And I haven’t even mentioned the Kenny Golladay factor, who had 13% of the target share as a rookie when on the field last season.

Davante Adams, Mike Evans and Demaryius Thomas are the receivers who stand out from the data here.

Davante Adams currently has the highest average draft position to date. And it is warranted as Aaron Rodgers number one option and his back-to-back seasons of double digit receiving touchdowns. Adams led the league in red zone target percentage last season. Even more impressive is Davante did this in 14 games with Rodgers active for only 7 of those contests.

Big Mike has four consecutive seasons of 1,000 receiving yards to start his career with 32 receiving touchdowns (12, 3, 12 & 5) tied for 7thmost since 2014. Of note, Evans saw 43% of the end zone targets, 21 in total and only 5 touchdowns. Can you say positive touchdown regression.

Demaryius Thomas offers significant profit potential at the backend of the third round. Thomas received 25.4% of the target share and recorded one more target than Adam Thielen last year but finished with 327 less receiving yards, is Case Keenum the answer?

Other candidates to ascend are Doug Baldwin, Stefon Diggs and JuJu Smith-Schuster.

Baldwin is currently banged up but if healthy, he should feast as the Seahawks primary receiver in an offense with a wealth of targets available. Is an increased role in end zone targets on the horizon?

The Stefon Diggs dilemma, with Adam Thielen there, can he be a true number one? I believe so, the Vikings have a new offensive coordinator and upgraded the quarterback position via free agency. Health is his only hurdle, Diggs For The Win!

JuJu was targeted 79 times in his rookie season, what are the realistic expectations for him this year, 100 or 120 targets? As long as Antonio Brown is healthy, Smith-Schuster’s upside is capped but remains a valuable asset and a lock to retain his wide receiver two status.

Other interesting situations at the wide receiver position

Will Alshon Jeffery be ready for the start of the season? Nelson Agholor would be the biggest beneficiary in the City of Brotherly Love. And his price point is primed for profitability. Mike Wallace makes for an interesting late round lottery ticket.

Devin Funchess is my biggest fade for multiple reasons. First is a healthy Greg Olsen and second is rookie wide out D.J. Moore. Funchess did see 23% of the target share and 33% of the end zone target share last year but that was mostly without Greg Olsen and Kelvin Benjamin as receiving options in the Panthers offense. The variable here is new offensive coordinator Norv Turner.

The wildcard player is Robby Anderson because of his off-field antics combined with the uncertainty at the quarterback position and the return of a healthy Quincy Enunwa. But I believe Robby is for real and I will continue to buy him at his current cost.

Other important factors to consider when surveying the landscape are what players were drafted, which players moved in free agency and who are the new coaches in new places?