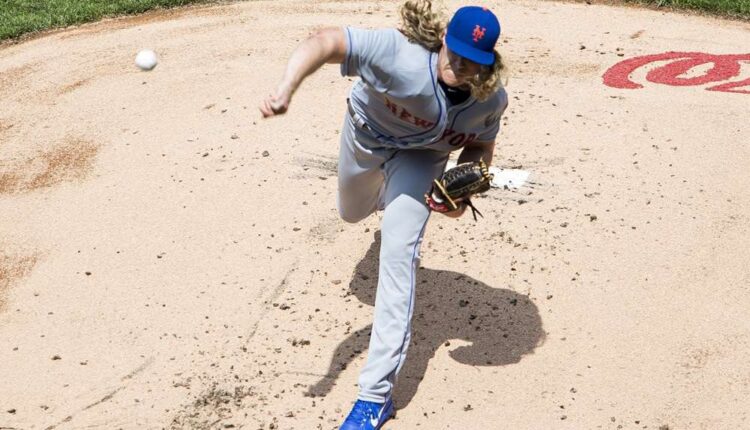 There was a pitcher that made other pitchers look like mere mortals. This pitcher could throw 100 MPH with ease and was built like a house, drawing compressions to a Greek god. He lived up to the high expectations… for a year or two. The pitcher, who has been dubbed after a Greek god, looked mortal in recent years, as he suffered injuries. However, this season he looks more mortal than ever, as he is healthy, but struggling. By now you know that this pitcher is Noah Syndergaard, the pitcher that once made fantasy owners envisioned as top pitcher for years to come.

I always thought if he could stay healthy he could finish as a Top 5 starter, if not even the SP1. The stuff was that filthy. But he has been healthy and taking the bump every fifth day… so why four starts in, is Syndergaard as the 229th overall player in Roto leagues with pitchers such as Adam Wainwright, Mike Leake, Derek Holland and Merrill Kelly ranked ahead of him?

Syndergaard currently sports a 5.63 ERA, having allowed four-or-more runs in three of his four outings. He still throws hard, averaging 98.3 MPH according to Brooks Baseball. No starter averages more velocity on the fastball this season than Syndergaard.

While the velocity numbers vary a tad, Fangraphs still has Syndergaard throwing the second hardest slider in the MLB this season, behind just teammate Jacob deGrom. He has plenty of velocity to still get by with this pitch and it shows as batters have just a .191 average and a .143 ISO against the pitch.

The concern is that it is simply generating fewer swinging strikes than in years past. This season he has a 15.6 percent whiff rate with the pitch, compared to 25.8 in 2018. But, not all swinging strikes are created equal. That slider, while not what it once was, is still operating as a put-away pitch. Syndergaard has thrown his slider 16 percent of the time with two strikes and currently has a 28.6-percent swinging strike rate and a 75-percent strikeout rate with it. One issue is that he is throwing his fastball 30 percent of the time with two strikes and has just a 7.7 percent swinging strike rate. We know he has the nasty stuff to still get strikeouts, as he has a 29.9 percent strikeout rate, but the problem is before he gets to two strikes.

One issue has been falling behind early on. His first pitch strike rate is 55.7 percent, which is not only a career-low, but it is well below the league average rate of 60.1 percent. While batters have hit .191 against the slider and just .150 against the changeup, they’ve had better luck against his other pitches. They are hitting .261 against his four-seam. Against the sinker they are hitting .381 and .500 against the curve. It’s worth mentioning his velo on the curve is down about 2 MPH. Batters also have a .238 ISO against his sinker and a 1.500 ISO against the curve. Both would be career highs. That explains why he has a career-high hard-hit rate, although it is 30.6 percent. He still is getting a ton of ground balls as well, getting them 53.3 percent of the times.

While the results haven’t been what we wanted, the underlying numbers say he will get better. He currently has a 3.10 FIP, a 3.03 xFIP and an insanely low strand rate of 54.6 percent. That strand rate will climb back up towards around 75 percent, which will help that ERA get in line to the indicators. However, the .322 BABIP is on par with last year and too many times last year soft contact would lead to runs and that is my fear for this season.

I do not question whether Syndergaard can finish as an SP1, but due to the decreased velocity on his slider and curve, and batters fairing better against those pitches, I do worry that Syndergaard no longer possesses the ceiling he once did. While I believe he can be a SP1, I used to think he could be THE SP1. Now I am not so sure he ever gets there.

Are you worried about Noah Syndergaard?

In a league full of struggling aces, Syndergaard does not stand alone. In fact, he met head-to-head against another ace who has been lackluster this season and the duo allowed five runs apiece. If there are better days on the horizon for Syndergaard, can there be as well for Aaron Nola?

Aaron Nola has also gotten off to a terrible start. He’s currently rocking a 7.45 ERA and has allowed four earned runs in his last three outings. If you were hoping that the indicators would show he has been just unlucky… well you may not like the answer. He currently has a 6.24 FIP and a 4.62 xFIP showing that while he has been unlucky, it is not enough to just blame it on that.

The first thing I looked into was the velocity. While his velo is down slightly, it is less than a full MPH. That could hurt Nola, but not to the extent that he has struggled. Also, he has actually improved the amount of movement on his pitches so far this season, so that is out. The one change he made in pitch usage was throwing the changeup about five percent less, in place of his sinker. Perhaps he should change back as batters have hit .444 against his sinker, compared to .348 with the curve. While batters are hitting just .136 against his fastball and .167 against the change, they have a .409 ISO against the four-seam and .333 against the change, compared to just .111 against the sinker and .174 against the curve. What that means is batters are getting more hits against the sinker and curveball, but hitting for more power against the fastball and changeup. It is very strange.

Nola himself and Phillies Manager Gabe Kapler have discussed his command as the issue. Looking into it, he has a walk rate of 12.6 percent, which would be by far a career high. He’s only thrown a first-pitch strike 48.3 percent of the time. That is not only down over 20 percentage points from last year, but it is well below league average of 60.1 percent. Could command be the lone cause here?

The lack of command could also explain the decrease in strikeouts. As we know he has fallen behind batters more often than not. Nola has at least a 31.6 percent strikeout rate on each of his four pitches when thrown with two strikes, showing that he still has the ability to punch batters out. But the lack of first-pitch strikes and the high walk rate show me that he is falling behind batters often. That would help explain why batters chased just 25.1 percent of his pitches outside the zone, compared to 33.2 percent last year. A pitcher typically needs to be ahead in the count to get the batter to be protective and more likely to chase a pitch outside the zone. That would also help explain his career-low 8.4 percent swinging strike rate.

When batters have made contact this year, they have not done a ton of damage. They have just a 26.3 percent hard-hit rate to go with a 49.1 percent ground ball rate. Both are on par with what Nola did last year. The .308 BABIP is up significantly from 2018 (.251), but it is not glaringly high. Unlike his 60-percent strand rate, which is sure to improve and lead to an improvement in the ERA. Additionally, he has allowed five homers already, good for a 27.8 HR/FB rate. Not only is that six percentage points higher than the highest HR/FB rate in a full season in MLB history, but it is also entirely too high for Nola, who has had a HR/FB rate below 13 percent in three straight seasons.

The velocity and movement of his pitches is still there, meaning Nola can return to form. However, there is either something mechanically off or perhaps he is covering up an injury. There is something causing his command to suffer so much. That lack of command is leading to more walks, as well as falling behind hitters, which has hurt his strikeout total.

Are you worried about Aaron Nola?

I am more worried about Nola than I am Syndergaard, as Syndy should have no issue finishing as an SP1, but my concerns are more with him ever reaching the upside we all thought he possessed. Nola, on the other hand, has more of a command issue. We have seen high walk rates from a number of top tier pitchers this season, so perhaps the cold weather has come into play. Perhaps it is mechanical and hopefully, it is not the first sign of an arm injury. Nola can certainly right the ship if he can regain the command he showed in recent years, but that justifies at least some cause for concern.