What to Do with Struggling Hitters: Jesus Aguilar, Travis Shaw and More! 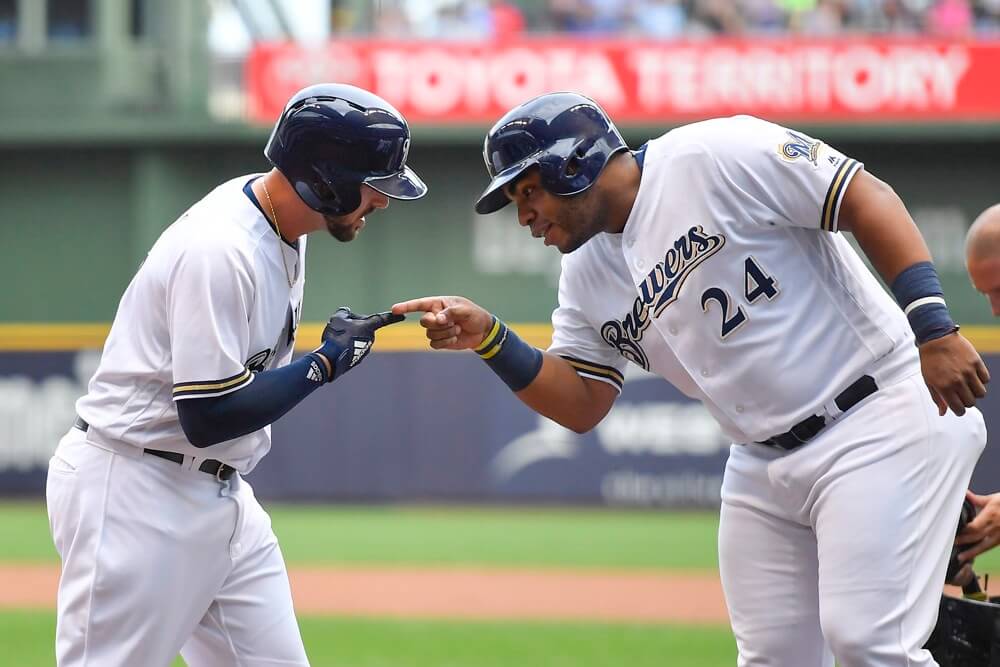 There are a number of hitters that got off to poor starts this season and many Fantasy Baseball owners have been wondering what to do with them. I have received questions about sitting and even dropping some of these players. I am here to either talk you off the edge or allow you to make the jump and cut bait with a struggling slugger.

Is it time to panic?

Jesus Aguilar is a player I have on multiple teams. It has been ugly as he has the third lowest average among qualified hitters at .136. He does not have a home run and has provided just five RBI and runs, each. For a good portion of the season Aguilar’s expected stats were much better than his surface one. While they still are, even those numbers are being dragged down. Aguilar is currently hitting .136 with an expected batting average of .222. The -.086 difference between the two is the 10th biggest difference, but still, we expected higher than a .222 average. His slugging is .167 while his expected slugging is .346, good for a difference of -.179, the 12th largest in the MLB. Still, that is a much lower rate than we paid for.

There is still reason to believe with Aguilar. His walk rate (11.5 percent) is up a percentage point from last year, while his strikeout rate (21.8 percent) is just under four percentage points lower than last year. He has a 38 percent hard-hit rate and fly ball rate on Fangraphs. The one concern I have with that is Baseball Savant has his hard-hit rate of 28 percent, which is significantly less. He’s also chased fewer pitches outside of the zone. It is hard to trust Aguilar right now, but I do believe with so much of his hitter profile being similar to last season I expect him to improve. I am okay benching him, I am in one league, but I would not drop. In fact, I would try to buy for dirt-cheap if I could.

Travis Shaw is batting just .178, the 16th lowest batting average among qualified hitters. He has just one home run, five RBI and four runs. Unlike Aguilar, his strikeout rate is up to 31.3 percent, which is an increase of about 13 percentage points from last year. His walk rate (9.6 percent) is almost four percentage points lower from last year. His expected batting average is just .200 and his expected slugging is .305. Both are higher than his surface stats, but not significantly higher. His swinging strike rate is up to a career-high 14 percent, while he is chasing fewer pitches outside the zone. There are some positives, as he has a 42.6 percent hard-hit rate and a 39.1 percent fly ball rate. I expect the power numbers to improve, but I do think the slow start will prevent him from living up to preseason expectations. Shaw can be benched for now. I wouldn’t drop him outside of 10-team leagues, which even then depends on the players available.

Kyle Schwarber is also batting below the Mendoza line, sitting at .194. He has just three homers and 6 RBI. His strikeout rate (27.9 percent) is on par with last season, while his walk rate is down to 8.8 percent, which would be a career low. He still does have a 39.5 percent hard-hit rate and a 36.6 percent fly ball rate. However, his expected average is still just .227. Where he sees big gains is in expected slugging percent. His is currently .455, which is .100 percentage points higher than his slugging percent (.355). Oddly enough, Schwarber is swinging at fewer pitches outside the zone and his swinging strike rate is a career low. I do expect him to improve, although I do not think he will live up to expectations. I think Schwarber will be streaky this season. He is a fringey player in 10-team leagues. In 12-team leagues, I think it all depends on the size of your roster. If you start only three outfielders he can be cut, while if you start five I would hold. In anything deeper I say hold.

Brian Dozier is striking out more (28.4 percent) and walking less (6 percent) to start the season. He does have three homers and one steal, but outside of that you are not getting much production. His expected average is just .204 and his expected slugging is just .362, both are barely higher than his current numbers. His hard-hit rate (37.2 percent) is on par with last year while his fly ball rate is down to 37.2 percent. He currently sports a 12.2 percent swinging strike rate and his 26.1 percent chase rate is the highest it has been since 2016. Dozier is one to hit homers in bunches and he is no stranger to slow starts, but still, given the plate discipline and secondary stats not being much better than the surface ones, he is not a player you must hold onto. In 15-team leagues you don’t have a choice. In 10-team leagues you can cut bait and in 12 team leagues with no middle infield spot, he can also be dropped.

Ender Inciarte has not lived up to expectations. The speedster is currently hitting .197 with a homer, three RBI and two stolen bases. His walk rate (7.7 percent) is on par with last year, but he is striking out way more. His 21.8 percent strikeout rate is a career high. Additionally, his 10.2 percent swinging strike rate is a career high and his 35.9 percent chase rate is the second highest of his career. His expected batting average is currently .223, which is a long way away from the average you expected when you drafted him. Additionally, it looks like he lost his spot hitting leadoff for the Braves. He has not hit leadoff since April 12. In his last six games, he has hit eighth or lower. He has not attempted a stolen base in those six games, which is another big category you expect to receive from Inciarte. In 15-team leagues you have to hold, but in 12-team leagues you can cut bait, although I am less inclined to do so in Roto formats than points. In 10-team leagues he can be cut regardless of format.