The Stolen Base Conundrum

Stolen bases have been on a steep decline over the last several years. Whether it’s from a talent decline (doubtful) or teams understanding that they are often a risky venture not worth taking (probable), the prevailing thought is that we are on the downswing as far as this one statistical category in the game we love. I too have fallen victim to this thought, and it’s a big reason a player like Jonathan Villar was getting so much love going into the 2017 draft season.

I remember my draft strategy in the early 2000s being one of “wait and take a rabbit later,” and all but ignoring speed for the first several rounds. I knew that somewhere in the later rounds of the draft was a Ben Revere who could steal me 35-40 bases and, coupled with a few guys I pick up off the wire, take care of that category for me. Sure, the owner who drafted a 30/30 guy in the earlier rounds had a better shot at winning the steals category, but I knew I could compete just by using my wits and making savvy decisions.

But somewhere along the lines that strategy and thinking changed. With stolen bases disappearing like the majestic condor, what were we as fantasy players to do? The only way to ever achieve one of these amazing feats of strength was to smuggle them into your lineup with the occasional minor league promotion or to bid 95% of your auction budget on famed speedster Billy Hamilton. Sure, Hamilton would destroy your team in nearly every other category, but he would get you those sweet, sweet second base nabs. Those were dark times.

Well, maybe that’s taking it a bit too far. In analyzing the totals since 2001 (just an arbitrary decision, nothing to see here), our average number of stolen bases per season is roughly 2,800. Taking that into account, over the last three years we have seen a nearly 10% decrease in thefts. That is certainly a hefty enough number to explain the newfound value we place on stolen bases.

I’m sure there are plenty of reasons that can be attributed to this major shift in running totals, but one striking difference to me lies in another major fluctuation: home run totals. 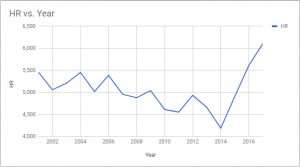 Now, for those of you who don’t remember your basic laws of statistical analysis, correlation does not always imply causation. That said, it’s not a stretch to say that, with more and more hitters bashing the ball out of the park, the players getting on base are less likely to want to run into an out and would rather stay put, turning that solo shot into a two-run home run. Teams are getting smarter (well, mostly) and the analytical departments have more sway than they used to, and I believe that also affects our stolen base totals.

As fantasy players, what are we to do with this information? The truth is we have already made the necessary shift in our valuation process. It’s the reason a player like Trea Turner has top-12 overall value despite not having much patience and being a semi-threat to your batting average. It’s also the same reason I have Jose Ramirez valued higher than Carlos Correa. Correa is clearly a stud, but if he’s not going to steal bases and Ramirez is, then Jo-Ram is far more valuable, in my opinion.

With all of that said, I certainly can’t suggest sitting on your hands early in a draft and waiting for stolen bases. If you do, you’ll likely have to play catch-up the entire season. Try to get players that can help you in all categories early, then reevaluate your draft as you go along. If you are heavy on stolen bases in the first 4-5 rounds, maybe bypass Eduardo Nunez. If you are heavy on power and need a speedster, take a slight reach and go for Whit Merrifield. Constantly evaluate your team and always be on the lookout for the next big speedster.