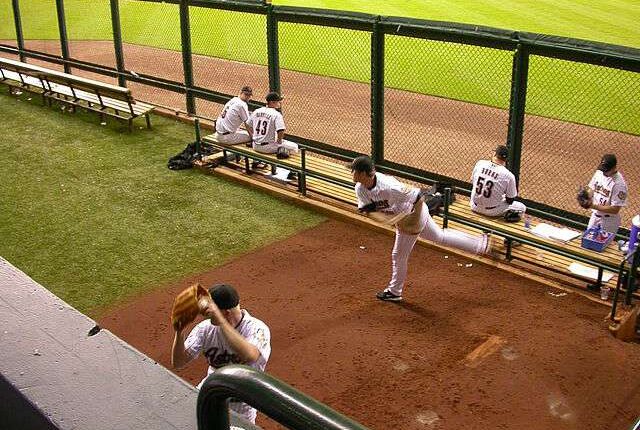 In a shortened 2020 season, teams will be relying heavily on their bullpens. With only 60 games to be played, relievers are not only going to play a pivotal role in the real game but in fantasy baseball as well. In this State of the Bullpen report, I’ll take you team-by-team to see where things stand, who has the closing job, who the next man up could be, and other relievers to target this season. We start this edition with the National League.

The Braves went a long way in bolstering their bullpen with the additions of Mark Melancon, Chris Martin, and Shane Greene at last year’s trade deadline. They didn’t stop there, adding Will Smith in free agency out of San Francisco. Last season, Greene got the first shot at closing, but it was Mark Melancon that proved more effective, recording 11 saves over the final two months. Melancon goes into the season as the primary closer. Smith was perhaps the most effective in 2019 with a 2.76 ERA and 96 strikeouts in 65.1 innings, so expect him to come in when the Braves need him most.

The group of Melancon, Smith, Jackson, and Martin put together a stellar first Spring Training with a combined 18.1 innings, 29 strikeouts, and one earned run between them. While Melancon and Smith should be valuable in all leagues, Martin and Jackson could be sneaky adds leagues that count holds on one of the best teams in baseball.

Brandon Kintzler is the new addition for Miami and comes in with the closer job to enter the season. Unfortunately or the Marlins, they have the hardest strength of schedule after the short season realignment. Kintzler pitched 57 innings for the Cubs in 2019, posting a 2.68 ERA with a 7.58 K/9. The 3.56 FIP, 4.06 xFIP, and the inability to strike hitters are concerning. Yimi Garcia could step in a high leverage role after showing up in Spring Training 1.0 and pitching seven shutout innings with eight strikeouts, no hits allowed, and only one walk.

Another intriguing name acquired by the Marlins was Ryne Stanek. Stanek pitched 77 innings between the Marlins and the Rays, where he was used as an opener 27 times in 2019. On 14 occasions, Stanek completed two full innings. After striking out 89 batters in those 77 innings, a 15.3% swinging-strike rate suggests there’s room for more. Stanek has SP eligibility, which may come in handy in H2H leagues with SP slots when you don’t have a starter going.

After leading the league in saves in 2018, the Mets gave up a fortune to acquire the young closer. It didn’t exactly pay off after Diaz posted a 5.59 ERA. While he did accumulate 26 saves, he was credited with seven losses and seven blown saves. Manager Luis Rojas recently expressed interest in going with a committee, mentioning Dellin Betances, Seth Lugo, and Jeurys Familia as possibilities to contribute in the ninth inning.

Seth Lugo may be the best weapon out of that pen and one of the best middle relievers to target for ratios while he can also grab a win or save here and there. The Mets got the most of Lugo last season with a 2.70 ERA, 0.90 WHIP, and 104 strikeouts in 80 innings.

The Phillies bullpen took hit after hit last season, but Hector Neris came through in a big way. Neris had an excellent bounce-back season, posting a 2.93 ERA while saving 28 games. He goes into the season with a secure hold on the closer job for what should be a competitive Phillies team. Meanwhile, the rest of the bullpen is in flux after Seranthony Dominguez was shut down due to an elbow strain that will require Tommy John surgery. David Robertson could be available at some point in the season, but he’s also recovering from Tommy John. Which makes Nick Pivetta a fascinating option out of the pen.

Despite a stint on the injured list, Sean Doolittle’s 60 innings were the most he has pitched in the majors since 2014. And the 29 saves on the season were a career-high for the Nationals closer. Perhaps the increased workload caught up to Doolittle as he posted a 5.56 ERA in the second half after pitching to a 3.13 ERA in the first half. After his return from the injured list, trade deadline acquisition Daniel Hudson formed a committee with Doolittle to share the workload in the ninth inning. Doolittle has been vocal about his concerns with the start of the season. Should he opt out, Hudson would be thrust into the closer role while Will Harris becomes the next in line. Harris has pitched to an ERA under 3.00 in four of the last five years and would be more than serviceable in a high-leverage role.

Craig Kimbrel had to wait until June 27 to pitch for an MLB team last season after hitting free agency with draft pick compensation tied to his services. Perhaps the late start had a little bit to do with his decline this season after he ended the year with a 6.53 ERA and 13 saves for the Cubs. Kimbrel had a 50% hard contact rate given up, and when he’s walking 12.5% of batters and striking out a career-low 31.3%, it is not going to end well. One thing Kimbrel has going for him is his contract. Chicago invested three years and $43 million in Kimbrel, so he will have an opportunity to get on the right track this year.

Rowan Wick performed well in his 33.1 innings in 2019, posting a 2.43 ERA and recording two saves as part of a committee when Kimbrel was not available. Wick is a lock to make the team and see some high-leverage work behind Kimbrel.

With 34 saves to finish the season, there wasn’t much to complain about when it came to Reds closer Raisel Iglesias. Despite a 4.16 ERA, Iglesias posted career-best strikeout and walk rates. What hurt Iglesias in 2019 was a 29.9% ground ball rate that was the lowest of his career, leading to more home runs given up. Michael Lorenzon and Amir Garrett pitched excellent behind Iglesias all season, Lorenzen earning himself seven saves. The trio should form a formidable backend of the bullpen that now includes Pedro Stop.

Do not forget about Robert Stephenson. He posted a 3.76 ERA, 1.04 WHIP, and 81 strikeouts in 64.2 innings. His 18.9% swinging strike rate was third in all of baseball behind only Josh Hader and Nick Anderson. Stephenson could be next in line as one of the premier middle relievers in the game that could help your ratios and accumulate strikeouts.

Perhaps no closer in the game generates more buzz than Josh Hader. Well, because no closer in the game induces more strikeouts. Hader led MLB in strikeout percentage at 47.8% on his way to 37 saves for the Brewers. There is no question that Hader is one of the most dangerous weapons out of any bullpen. In a 60 game season, every game counts, and the Brewers are going to rely heavily on Hader in the late innings. I can see Hader pitching four to five innings in a given week with 10-12 strikeouts, and a win or save, maybe both. That’s going to be more valuable than many starters you could roster.

While manager Craig Counsell is not afraid to bring Hader out in the eighth inning to start a save chance, he doesn’t like using Hader on consecutive days. This could open the door for Corey Knebel to make his return from Tommy John and contribute in those high-leverage situations.

Freddy Peralta and Corbin Burnes are oozing with potential. While they may not get an opportunity in the rotation, they could be relievers that log more innings than most as long relievers and spot starters. Both are worth rostering no matter the role.

The Pirates did not do much to address their bullpen over the offseason. The reliever with the most experience in Keone Kela was confirmed as the team’s closer. Kela suffered a shoulder injury in 2019 and was limited to 29.2 innings. Though he did post a 2.12 ERA in those innings. Meanwhile, Kyle Crick remains as the team’s eighth-inning setup man. And Nick Burdi could carve a role for himself after missing most of 2019. Ultimately, the only name you really need to know in this bullpen is the one getting the saves.

While Giovanny Gallegos had an outstanding 2019, it’s Ryan Helsley that’s hearing his name connected to the Cardinals’ closer job. Helsley’s skillet mostly resembles Jordan Hicks, who is recovering from Tommy John surgery but could return shortly after the start of the season. Gallegos would be an excellent option in any holds league and could return value as a reliever in any league given his 2.31 ERA in 74 innings for St. Louis.

Archie Bradley finally got his opportunity to close games in Arizona in 2019. He made the most of it in the second half with a 1.71 ERA after the All-Star break that was second to only Kirby Yates. Most of his 18 saves came during that stretch. The Diamondbacks showed they are trying to compete by trading for Starling Marte and signing Madison Bumgarner. Bradley could finish among the save leaders in a 60 game stretch.

Even with a 4.13 ERA in 2018, Wade Davis proved that a closer in Colorado could be valuable with 43 saves. Things didn’t quite work out the same in 2019 as Davis finished with an 8.65 ERA, 15 saves, and a new role in middle relief. Perhaps it’s the money invested in Davis that has him once again looking at the ninth-inning duties this season. If Scott Oberg was healthy and finished the season, we might be talking about this situation differently. Oberg has pitched at least 50 innings and has had an ERA under 2.50 in each of the last two years.

Kenley Jansen posted the worst ERA of his career in 2019 at 3.71 after he saw a downtick in his cutter velocity. Reports early this spring were that he was back up to his career norm after working with Driveline. A bounce-back season for Jansen would make him a value for where he’s going in drafts compared to other top closers.

Given the team context, the Dodgers will be a team that generates a ton of holds. If Pedro Baez is healthy to start the season, he can once again accumulate 25-plus holds. Otherwise, it can just as well be Joe Kelly or Blake Treinen. And Brusdar Graterol will be intriguing to watch after Los Angeles acquired him in a deal with the Twins.

Given how the Dodgers handle their pitchers, Dustin May and Ross Stripling are sure to be utilized in long stretches from the bullpen and in the rotation, especially after David Price opted out of the season.

Kirby Yates finished as the number one closer in 2019 after a spectacular season, recording 41 saves and a 1.19 ERA. The Padres are competing, and a shortened season could actually bode well for Yates’ chances of remaining with the team despite free agency in 2021. But should he be traded, Emilio Pagan could step right in, as he was also one of the best relievers in the game in 2019.

There’s not too much fantasy relevancy on this San Francisco Giants bullpen, but any closer with a job is going to be rostered. For the Giants, that’s yet to be determined, but it looks like it’s down to Tony Watson or Tyler Rogers. Given Gabe Kapler’s tendencies, it could be both. Kapler has spoken highly of Rogers, the brother of Minnesota’s Taylor Rogers. He posted a 1.02 in only 17.2 innings for San Francisco in 2019.