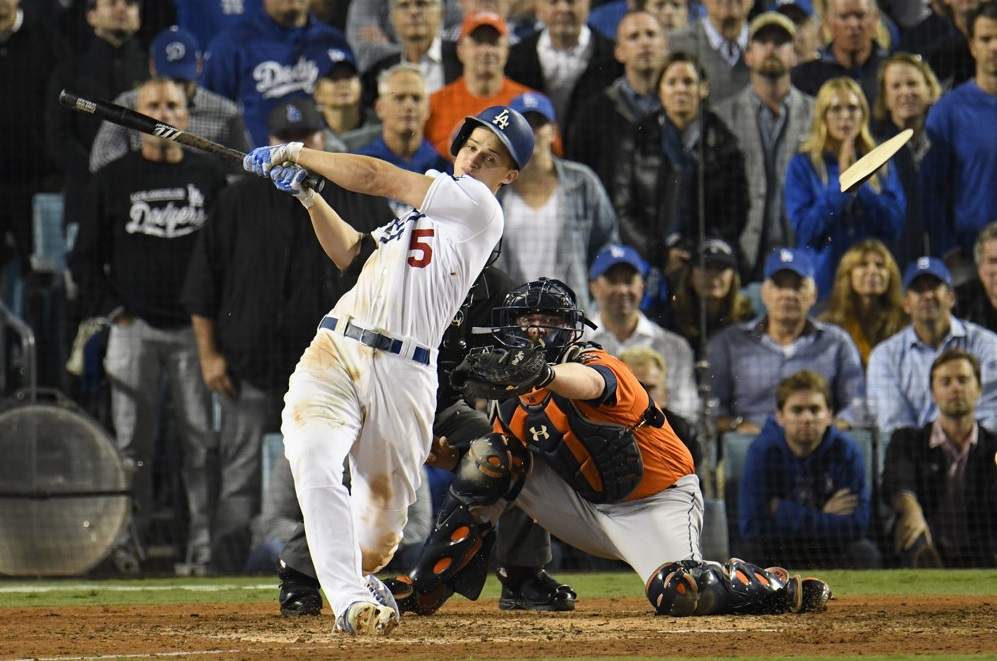 Statcast technology has changed the game of baseball over the last several years. Fans, analysts, front-offices, and managers all use Statcast data to make decisions, whether it be in real life or Fantasy Baseball. While still a small sample in 2020, some exciting Statcast trends are worth monitoring.

Often, Fantasy players and analysts put too much emphasis on Statcast data and make it an “end-all, be-all.” I want to preface this by saying, Statcast data should not be the only research you do when evaluating players for Fantasy Baseball. Statcast is just another tool in the toolshed that can help you make decisions about a player. This weekly piece will look at Statcast trends in different categories and look at the legitimacy of their performances.

Last week, we briefly covered Corey Seager and how hard he was hitting the ball through his first three games. The hot streak has continued with Seager hitting .361 with three home runs in his first forty plate appearances. Fans have been waiting for another big season, and it looks like Seager is primed for his best performance since winning the Rookie of the Year award in 2016.

Looking at the Statcast data, Seager’s blazing hot start looks legitimate. He currently leads all of baseball in barrels with nine. His barrels per plate appearance percentage is 22.5, which is the best in baseball. A barrel is a batted-ball event that has led to a minimum of a .500 batting average and a 1.500 slugging percentage since Statcast began in 2015. For a batted ball to be barreled, it requires an exit velocity of at least 98 miles-per-hour. At that exit velocity, the ball needs to have a launch angle between 26 and 30 degrees of loft. The harder the ball is hit, the wider the degree of launch angle gets—the graphic below his helpful in understanding this. 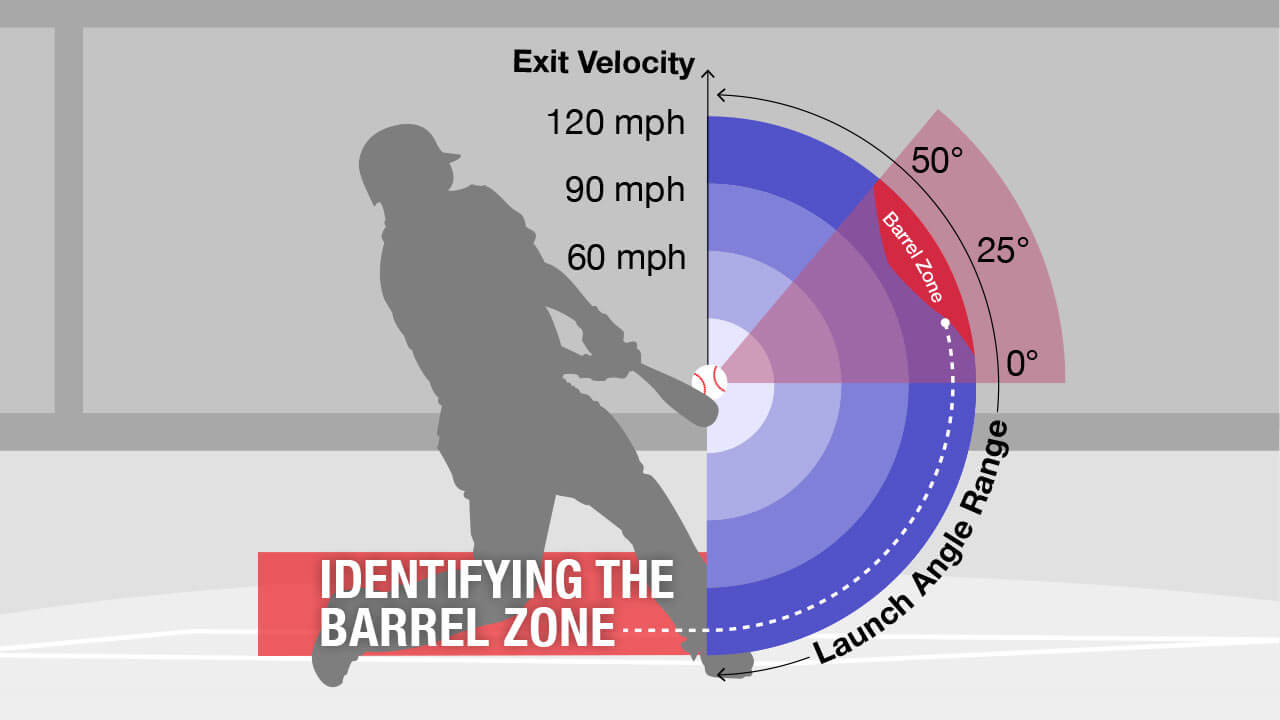 Looking further into Seager’s Statcast data on Baseball Savant, it is clear that he is hitting the ball exceptionally well. He has 21 batted balls hit 95 miles-per-hour or harder, the most of any hitter in baseball. Coupling that stat with his sweet-spot percentage(a batted ball with a launch angle between eight and 32 degrees) of 48.5 percent, is an excellent recipe for success.

The list continues for how well Seager is performing as he has a .506 expected batting average and a staggering .660 xwOBA. Everything that we have seen so far from Corey Seager has been extremely positive, and he looks like he could have an MVP caliber season.

The good news is that in 41 plate appearances in 2020, Ozuna is batting .342, a large part thanks to an extremely high hard-hit rate. Fourteen of his batted balls have been hit 95 miles-per-hour or harder, giving him a 56 percent hard-hit rate. Additionally, Ozuna is also hitting balls in the sweet spot 52 percent of the time. As mentioned with Seager, a high hard-hit rate paired with a high sweet spot percentage usually means excellent results.

Ozuna has been a solid cleanup hitter for the Braves who lost Josh Donaldson to the Twins during the offseason. His slash line of .324/439/.676 with three home runs and eight RBI has helped the Braves get off to a hot start. His Statcast trends back the hot start, and Ozuna is looking like the 2017 version of himself that hit .312 with 37 home runs.

I wrote about Colin Moran in a “Hot Starts” article last week and labeled him as a bust. What has he done since that article published? Just continued to rake!

Believe it or not, Moran was once ranked as a near top 50 prospect and was a big part of the trade that sent Gerrit Cole to Houston. He has always possessed a robust hit tool, and it looks like he is finally putting it all together in 2020.

Moran has already hit five home runs in just 35 plate appearances, while his career-high in a season is 13. He could best his career-high in this shortened 60 game season! He is sporting a .273 batting average, but an impressive .758 slugging percentage. The crazy aspect is that as good as his numbers have been, that Statcast data is even more impressive.

Moran’s career average exit velocity sits at 88.5 miles-per-hour but has risen to 95.8 this season, better than 98 percent of all hitters in baseball. Six barrels place him only behind Corey Seager while having a 17.1 barrel per plate appearance percentage.

Moran’s Statcast trends in expected slugging percentage have stood out, only trailing Corey Seager and Aaron Judge in players who have at least ten plate appearances. A .859 expected slugging percentage is quite impressive for a player like Moran, who has a career .429 SLG. The Statcast data backs up what Moran is doing, and even with some regression, Moran is looking like a must-own player for Fantasy purposes. At a minimum, continue to ride his hot streak!

The moment I heard that Nick Castellanos had signed with the Cincinnati Reds, I was ecstatic. Castellanos had so many attributes that led to believe he could be a star. Then, I saw his 2019 spray chart overlayed into Great American Ballpark, and I knew I wanted to acquire him everywhere in Fantasy. 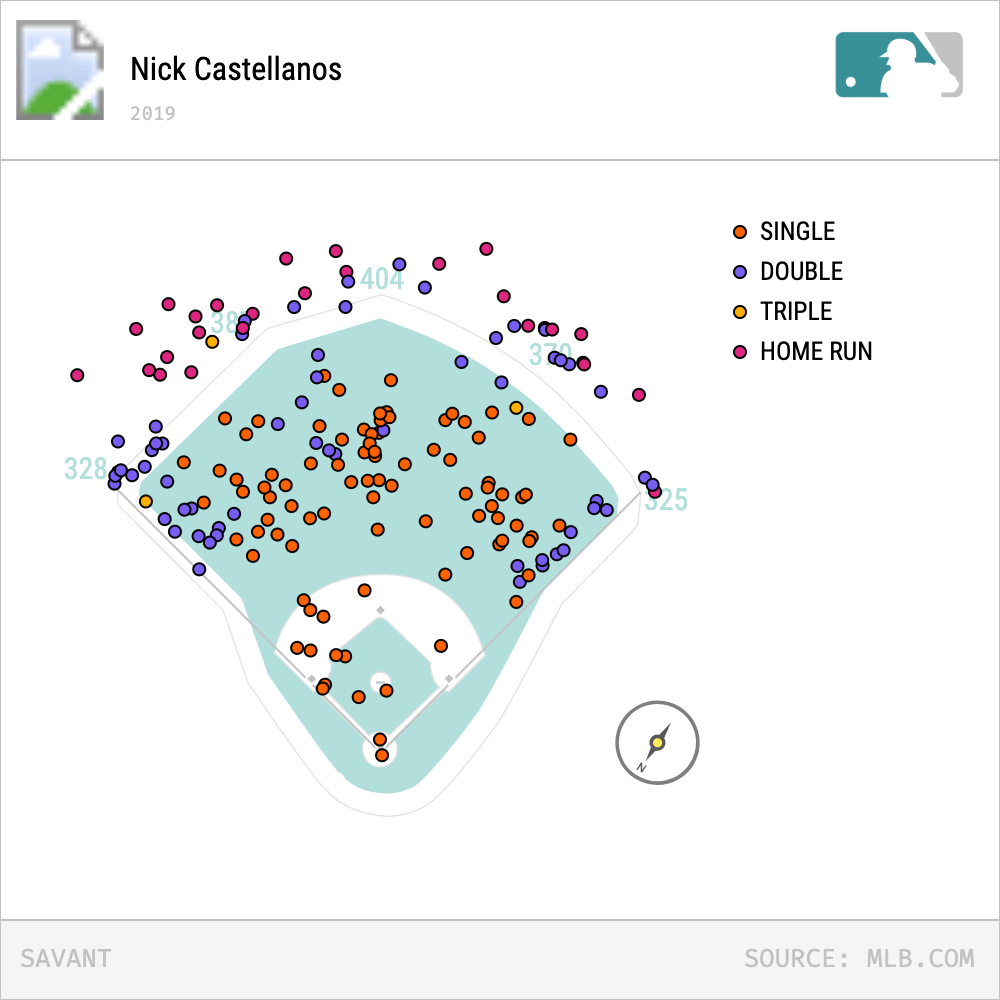 So far, Castellanos is looking like an MVP candidate, hitting .387 with four home runs and 11 RBI in 36 plate appearances. His walk rate has nearly doubled from his career average up to 11.1 percent, and Castellanos is getting on base almost 50 percent of the time. Even returning to his former home ballpark in Detroit could not hold Castellanos down, as he hit two home runs on Sunday.

Statcast data likes Castellanos even better as he ranks in the top four percent of the league in xBA, xSLG, xwOBA, and xwOBACON. Castellanos has an identical 56.5 hard-hit and sweet spot percentage, which plays well for his power. He looks like the hitter that Fantasy owners dreamed he could be preseason, and the Statcast data completely backs his performance up.

Dylan Bundy has made significant changes in 2020, and it is not just about his move from Baltimore to Los Angeles. Bundy has made tangible changes to his pitch arsenal that have gone a long way in improving his game. Statcast data shows that Bundy has lowered his four-seam fastball usage by 11 percent, which is a huge positive considering that pitch produced a -21 pVAL in 2019. His four-seamer has also added rise this year, which helps differentiate that pitch from his changeup more.

Additionally, Bundy has also increased his slider usage by over ten percent. The slider is arguably his best pitch, and it has been his most thrown pitch in 2020. The pitch change plus leaving Baltimore has been a significant factor in Bundy’s hot start with a 2.84 ERA, a 0.71 WHIP, and a 31.3 percent strikeout rate in 12.2 innings pitched.

His walk rate is down, and his strikeout rate is up. Bundy has one of the highest called plus swinging strike rates(CSW) at 40 percent. A lot of the success is thanks to the pitch mix change, so it is worth monitoring moving forward if he sticks with his decreased four-seam usage moving forward.

Tyler Chatwood is another player like Bundy who has seen a decreased usage in their four-seam fastball in 2020. After using that pitch 31.7 percent of the time and allowing a .415 xwOBA on it in 2019, Chatwood is now only using it 8.3 percent of the time. The change in his arsenal is already showing positive effects as he is pitching to a 0.71 ERA with a 40 percent strikeout rate in 12.2 innings pitched.

Chatwood has also significantly increased his cutter usage from 10.2 percent in 2019 to 27.2 percent in 2020. It has worked wonders for him, as he has struck out nine batters on that pitch alone and produced a 59.1 percent whiff rate. Another brilliant move for Chatwood as the change in his pitch mix has paid off. 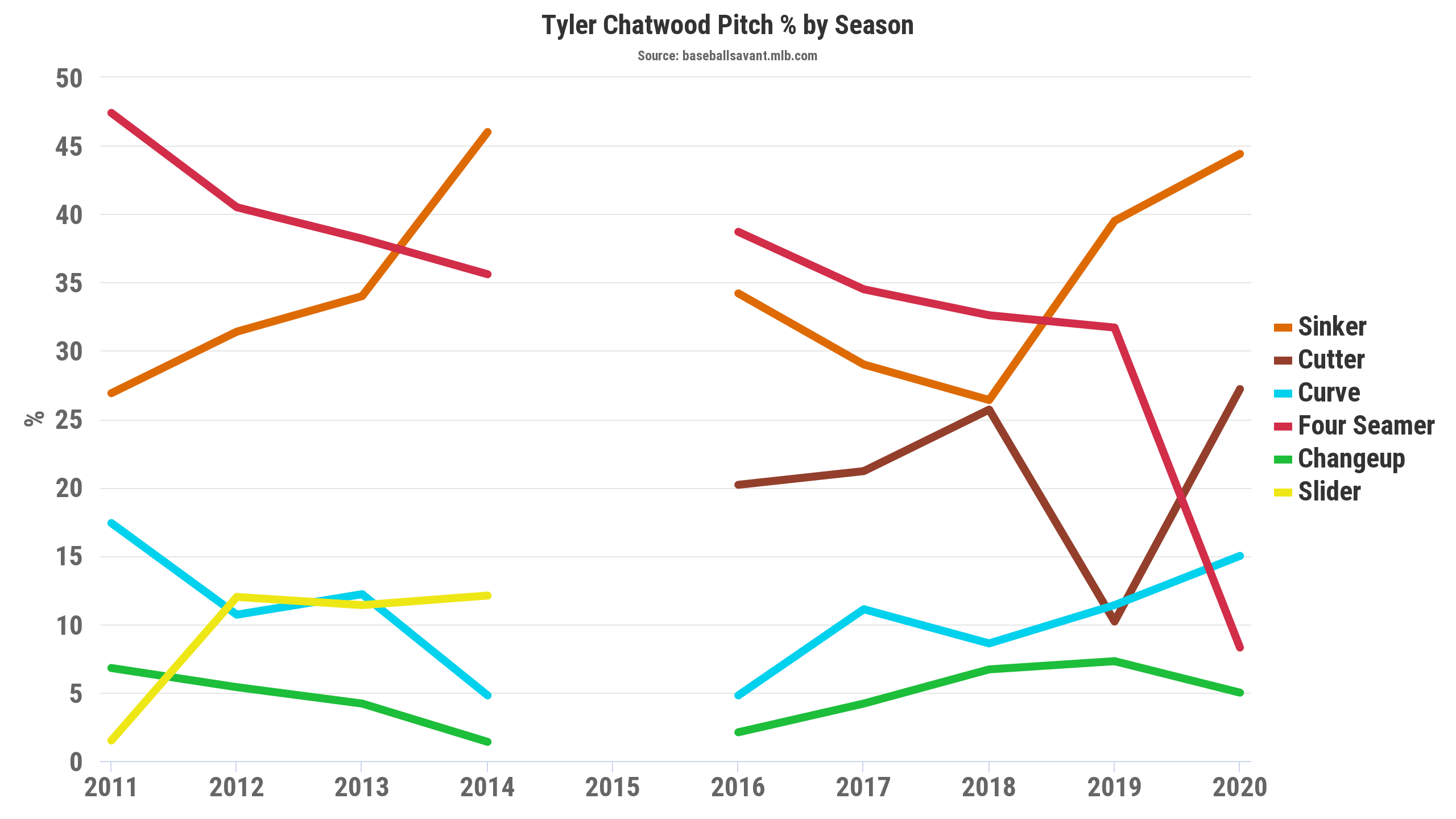 Chatwood has always had the stuff to be successful as his pitches produce great movement and have very high spin rates. His biggest struggle has always been command issues, having a career 11.9 percent walk rate. In the small sample of 2020, that number has dropped to 8.5 percent, which is a positive sign. The Statcast data helps support what Chatwood has done, even though he will not remain a 0.71 ERA pitcher for the rest of the season. He looks like a top 40 starting pitcher, so make sure you pick him up if he is still available in your leagues.

*All Data was drawn from Baseball Savant and Fangraphs