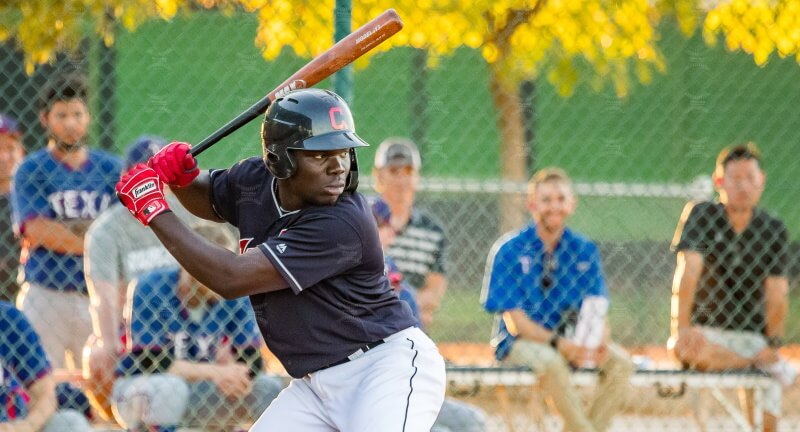 Welcome back to another edition of “Statcast Standouts.” This week, we dive into some prospects. We are now one month into Minor League Baseball season. It has been great seeing the prospects back on the field and getting both live looks and watch game film on the prospects we roster in dynasty leagues. You know the big-name, highly ranked prospects. But what about the not-so-popular names? We will dive in on some statcast data for those prospects, at least the little bit of data that we have, and see if we can find some hidden gem prospects for your dynasty leagues.

*All statcast metrics pulled from The Board on Fangraphs which is created by Eric Longenhagen.*

Statcast Standouts: Prospects Who Could Make a Jump

If you listen to the Fantrax Toolshed Podcast, you might have been in on Jhonkensy Noel before the season started. He was my pick for a first basemen prospect breakout for this season. He has done exactly that. The 19-year-old is tearing up single-A, slashing .358/.380/.672 through 71 plate appearances.

Unfortunately, Noel has not played since May 23, after being hit by a pitch. The team has been quiet, but reports stated there were no serious injuries. Hopefully, Noel returns to action this week.

Noel is listed at 6’1/180, but he certainly looks bigger. He possesses a ton of raw power and mashed five home runs over those 71 plate appearances. His hit tool also looks the part as Noel had multiple hits in seven of his 15 games.

From a statcast standpoint, Noel has hit the ball extremely hard. He currently owns a 90 mph average exit velocity with a max exit velocity of 112 mph, according to The Board. His hard-hit rate also sits at 42 percent. While it is a small sample, those numbers are quite impressive for a 19-year-old. Noel’s statcast data supports his strong start, and I anxiously await him returning to the field. Noel could be a huge riser up prospect rankings, so now is the time to buy-in.

Jordan Westburg did not get the love most first-rounders got in the 2020 MLB Draft, but he is looking the part so far in his pro debut. Even I underrated Westburg coming into this year as I did not see him tapping into more power. He hit 10 total home runs in 124 games at Mississippi State.

So far this season, Westburg is slashing .366/.484/.592 in single-A Delmarva. On top of the impressive slash, Westburg has three home runs and five stolen bases in 91 plate appearances.  His statcast numbers are also quite impressive, with an average exit velocity of 93 mph. His max exit velocity is also solid at 110 mph, according to The Board.

So, maybe I was wrong on Westburg. I’m willing to admit that, and I’m now buying in on Westburg. His swing is sound, and he brings a strong approach to the plate. It has me going back to the hit tool foundation. Trust the players with strong hit tools and believe that they can develop power later. That’s exactly what Westburg is doing. Buy now in your dynasty leagues.

Jordan Westburg adds a little insurance for Delmarva with his 2nd home run of the season. pic.twitter.com/VD1RyV0Y3m

Ezequiel Duran may be overshadowed by another Duran prospect(Jarren Duran) and another Yankees prospect(Oswald Peraza), but you should not ignore what he is doing. This Duran was a sleeper prospect of mine coming into the season and was my breakout pick on our second base prospect preview show.

Duran is slashing .292/.323/.517, and despite being on the smaller side, he packs a nice power punch. He may only have two home runs so far over 91 plate appearances. He has 12 extra-base hits, including four triples on the year. Duran controls the strike zone well makes contact at a high clip. You might be scared away because Duran has only one walk all year, but don’t be discouraged. In 2019, Duran walked at a nine percent rate.

From a statcast standpoint, Duran has a 92 mph average exit velocity, a 109 max exit velocity, and a 52% hard-hit rate, according to The Board. Not too shabby! Duran is a player who I could see continuing to rise up boards, especially if he continues to show an improved hit tool. I would like to see Duran challenged at Double-A, but I have been highly impressed with what I have seen from Ezequiel Duran for now.

Off the @FriendlyHonda Foul Pole! Ezequiel Duran extends the lead with this blast! Gades lead 2-0 pic.twitter.com/W4HuAjwHCz

Hope you enjoyed this week’s prospect edition of statcast standouts. Be sure to check out all our other great content at FantraxHQ.

References: Fangraphs’ “The Board”