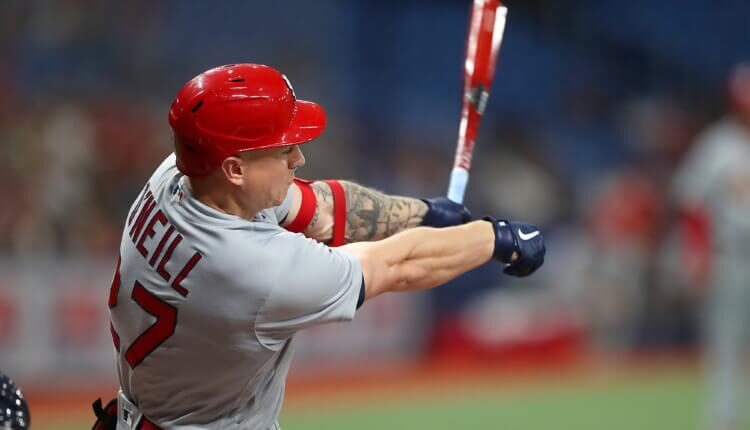 Statistics show that the harder you hit a baseball, the better chance it has for a hit. Players who consistently hit the ball hard tend to run higher batting averages and if they lift it well stand a chance to hit more home runs. Statcast tracks hard-hit rate, which is simply the percentage of a players batted balls that have an exit velocity of 95 mph or higher.

Today’s “Statcast Standouts” article will look at players who have improved their hard-hit rate this season, but also those who have seen it fall significantly.

Matt Chapman has been a pleasant surprise for the Toronto Blue Jays this season. He was once considered one of the top fantasy third basemen in 2018 and 2019 as he broke out, but Chapman faltered in 2020 and 2021. Chapman was traded to Toronto during the offseason and struggled to get going in the early part of 2022. Through May, Chapman had just a .201 batting average with six home runs.

Chapman then began picking it up, and each month has improved. Since June 1, Chapman has a .269/.345/.567 slash with 17 home runs over 235 plate appearances. July was his best month as he hit nine home runs and posted a .325 batting average.

Chapman is the largest riser in hard-hit rate from 2021 to 2022, according to statcast. Currently, he has an impressive 54.1 percent hard-hit rate which ranks fifth among all hitters.

Not only is Chapman hitting the ball harder, but he is also lifting it more consistently and turning those hard hits into home runs. Chapman feels like a lock to eclipse 30 home runs for the first time since 2019.

Josh Rojas is a name that caught my eye on this list. He is not having a standout season by any means, but Rojas had made strides at the plate. He has seen his hard-hit rate increase by nearly eight percentage points in 2022. Rojas has also cut his strikeout rate by over six percentage points and lowered his groundball rate by nine percent. All this has helped Rojas see an increase in batting average and a slight uptick in power.

For the season, Rojas has a .280/.351/.411 slash with seven home runs and 15 stolen bases. Rojas is likely still flying under the radar in your fantasy leagues, so you could grab him cheap. The gains in his profile seem legit, and Rojas could be a sneaky value play considering the batted ball improvements and his position eligibility.

Jesse Winker has been one of the bigger disappointments for Fantasy Baseball this season. Winker posted career-best numbers last season in 485 plate appearances, with a .305/.394/.556 slash with 24 home runs. This season, Winker has just 11 home runs and a .226/.345/.358 slash. His ISO has dropped by over .120 points. It is easy to call Winker a disappointment this season.

Winker was traded from Cincinnati to Seattle. Going from one of the better hitting environments to one of the worst. Regardless, it does not change the fact that Winker’s batted ball profile has changed. His high contact rates are still there. Winker has an 87.7 percent zone-contact rate. But his quality of contact has regressed.

Winker registers as the largest faller in hard-hit rate from 2021 to 2022. Last season he posted a 47.1 percent mark, but that has dropped to 32.5 percent this season. In addition to that, Winker’s average exit velocity has dropped by three mph.

Historically, Winker has mashed right-handed pitching. This year, he is hitting just .217 against them versus his career .295 mark. There is a lot going on in Winker’s profile that has caused regression, but there is still time for him to get back on track this year.

Like Winker, Tyler O’Neill has seen significant regression following a career season. He had many fantasy managers excited after a 34 home run and 15 stolen base season in 2021. Many said O’Neill would see batting average regression from his .286 mark last season, but most still expected a solid power and speed output. That has not been the case in 2022.

O’Neill has seen his hard-hit rate drop eleven percentage points in 2022, according to statcast. Injuries have riddled his season, but when he is on the field, O’Neill has not produced. It is interesting that his contact rates have jumped significantly, but the overall production has fallen.

On top of his hard-hit rate, O’Neill’s average exit velocity has dropped by three and a half percentage points this season. Overall, 2022 has been a major disappointment, and things have only worsened in the second half. Was 2021 a fluke? The jury is still out.

Thanks for checking out this edition of “Statcast Standouts.” Head to FantraxHQ to check out all our other great content to help you win your leagues.