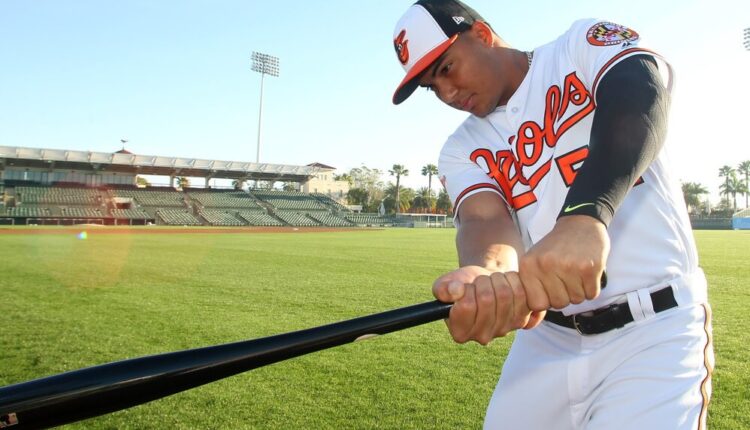 Exit velocity gets all the rage nowadays, and a player’s ability to hit the ball hard certainly matters. But, if a player does not make consistent contact, it does not matter how hard they can hit it. What about pounding the ball into the ground? Many players hit it hard but fail to lift the ball regularly. Statcast data matters and can better help us understand a player’s performance, but it is not always an end-all, be-all.

This article will look at the players who possess the best combo of contact, hard hits, and also the ability to lift the ball. For the latest statcast standouts article, I will use contact rates, 90th percentile exit velocity(strong correlation with power), and line drive plus fly ball rate to determine which players have the best combo of the three. It is not a perfect indication of performance or future performance by any means but does show underlying skills that could lead to strong future performances.

To no surprise, players like Yordan Alvarez, Pete Alonso, Will Smith, and Jose Ramirez show up at the top of the list. Seeing other names like Mookie Betts, Austin Riley, and Freddie Freeman should not surprise you. But, there are some intriguing names here. Let’s break them down and discuss with their statcast data to see if several of these players are legit.

Anthony Santander is probably the biggest surprise on the list. He checks in ranked sixth between the combination of contact, line drives and fly balls, and 90th percentile exit velocity. Santander has been underwhelming from a statistical standpoint if you look at his season-long line of .255/.334/.452. He does have 20 home runs on the season after adding another one tonight(Monday). However, much of Santander’s damage has been done over the last two months. He has ten home runs and a .281 batting average since June 1. 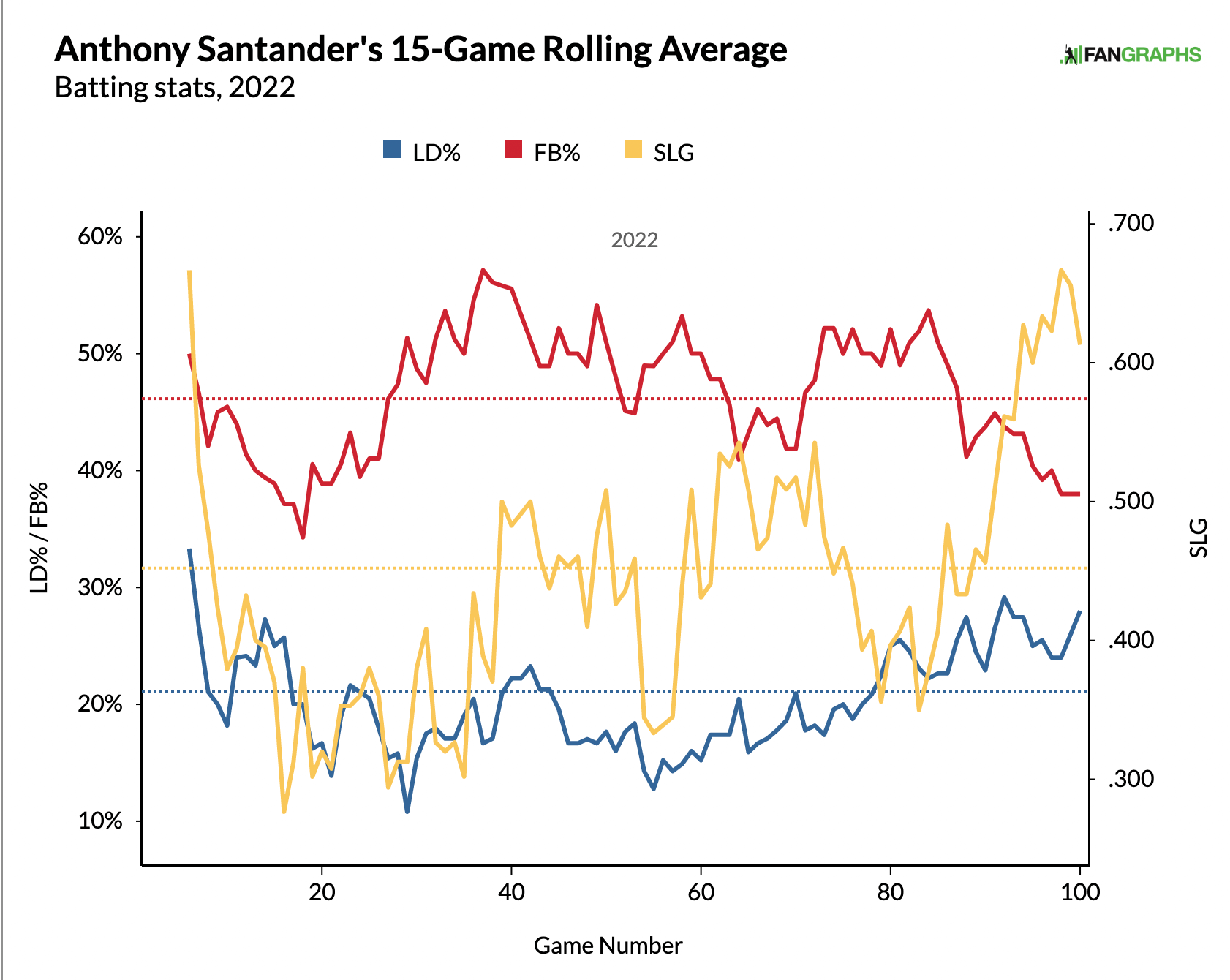 But, since the All-Star break, Santander has been even stronger. In those 65 plate appearances, he has a .339/.369/.613 slash. Things have been trending in the right direction for Santander, and his exit velocities have spiked upward over the last month. He is surprisingly still available in over 25 percent of Yahoo leagues. If you need outfield support, add Anthony Santander, where he is available. 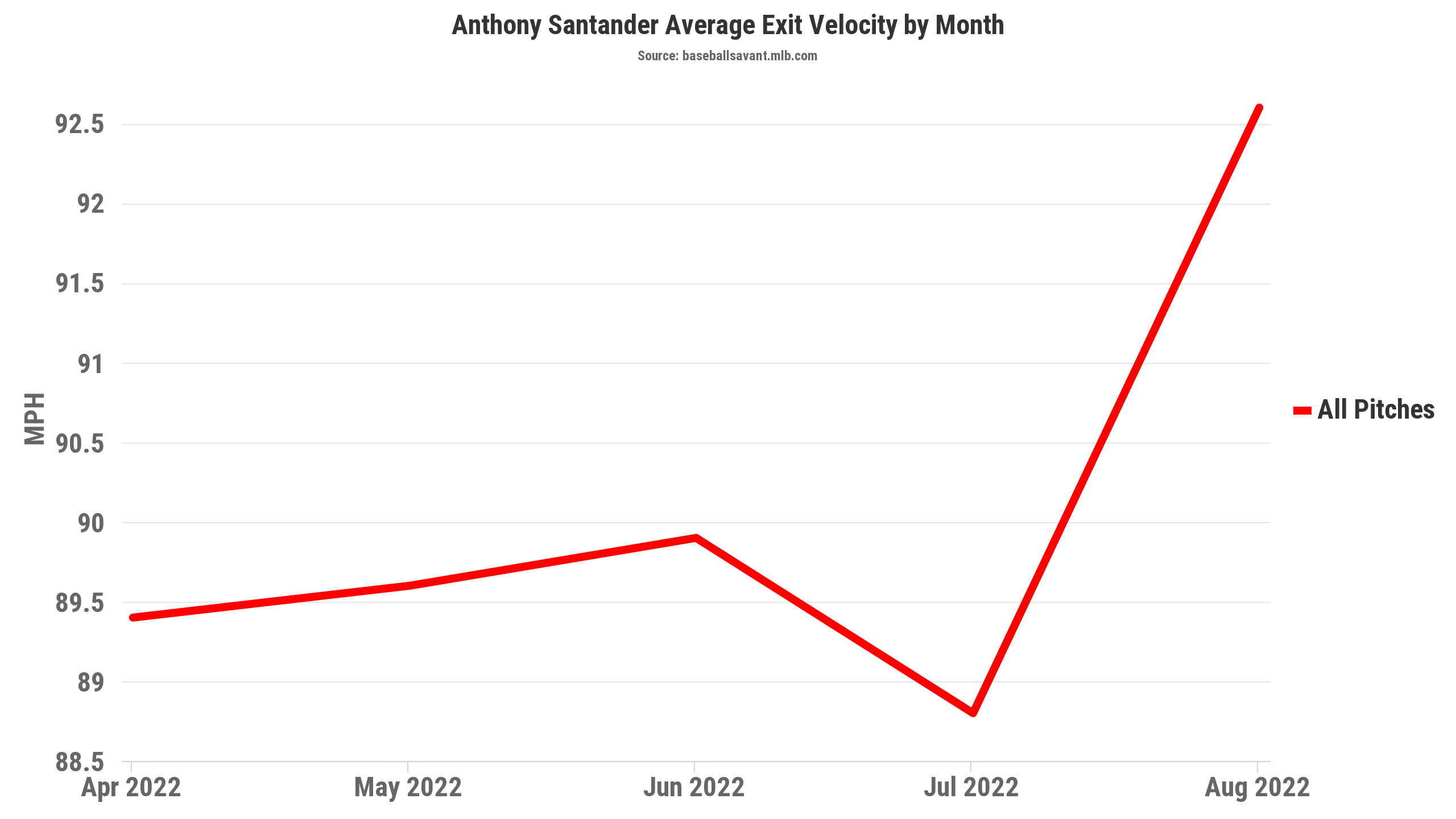 I’m not sure there have ever been any questions about Daniel Vogelbach’s ability to hit the ball hard. The 6’0″/270lb lefty recently was traded from Pittsburgh to the New York Mets, and he sure looks like he enjoys playing in the Big Apple. Since the trade, Vogelbach has found regular playing time and is slashing .314/.478/.543 with two home runs in 46 plate appearances.

Vogelbach has 14 home runs on the season and can spray line drives to all fields well. He makes excellent contact as well. When you think of Vogelbach, you likely don’t think of an 81.4 percent contact rate and a near 90 percent zone contact rate, but that is who he has been the last several years.

Vogelbach is rostered in just seven percent of Yahoo leagues. He could provide useful fantasy value down the stretch if you are looking for a first baseman.

Matt Chapman has been a pleasant surprise this year for fantasy managers. After 2018 and 2019, Chapman looked like a future fantasy star at third base. After that, he fell off hard in 2020 and 2021. A trade to Toronto has seemingly made a difference for Chapman. It wasn’t all great, however. Through the end of June, Chapman has just a .223 batting average with 11 home runs in 281 plate appearances. Since July 1, Chapman has a .274/.347/.594 slash with 11 home runs in just 121 plate appearances.

Chapman is rostered in nearly all leagues, but if you are in a trade league, he is a solid target if the manager looks at just his overall stat line. Chapman could be one of the best third basemen for fantasy throughout the rest of the season.

Thanks for stopping by and checking out this edition of Statcast Standouts. I hope you find the list useful and can add several of these under valued players to your team. In the meantime, go check out all our great content at FantraxHQ.