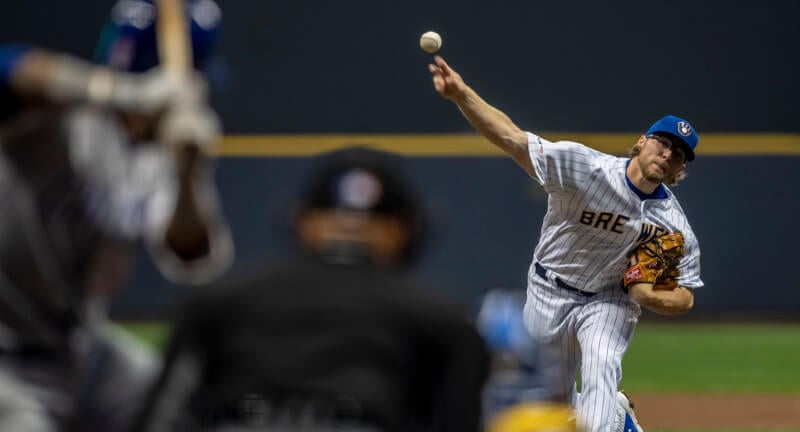 CSW rate or called plus swinging strike percentage has taken the baseball world by storm. Created by Nick Pollack and Alex Fast of Pitcher List, CSW rate is called strikes plus whiffs, divided by total pitches. Nick and Alex first used the stat on their podcast, leading to a research article that won awards. Since then, the statistic has been featured on MLB broadcast, and the CSW leaderboard can now be found on Fangraphs.

Today, I will examine some pitchers who have seen their CSW rate rise and fall from 2020 to 2021. This could be a good indicator if early breakouts are legitimate. It could also show why a pitcher is struggling early on and if they could rebound moving forward. Let’s take a look at noticeable risers and fallers in CSW rate.

Of any starter in baseball, Julio Urias has seen the largest jump in CSW% from 2020. Last season, Urias’s CSW% sat at a pedestrian 25.7% but saw that number rise to 34.4% in 2021. That places him fourth in baseball, behind only Corbin Burnes, Gerrit Cole, and Jacob deGrom. Some elite company!

The former top prospect has made significant strides thanks to the increased curveball and changeup usage. Urias’s curveball has been an effective pitch on getting hitters to chase on pitches out of the zone and has induced a 34.6 percent whiff rate. His changeup has also seen an increased whiff rate this season.

Another factor with Urias’s increased CSW% is him pounding the zone more often. He has seen 76.9 percent of his first pitches go for strikes. His zone rate is up in general as well. When he does avoid the zone, hitters have a 36 percent chase rate.

Urias has also seemed to be freed from the innings limit the Dodgers have put on him throughout his career. He has pitched seven innings four times this season and 6.2 innings in another start. Before this season, Urias had never thrown seven innings in a single outing.

I buy the strong start from Urias and the increased strikeout rate. This is the pitcher many thought he could be when he was once the top pitching prospect in baseball. Now, at 24 years old, Urias is coming into his own and breaking out. Buy where you can!

There is not much that needs to be said about Corbin Burnes. He has continued to improve his gain and owns the highest CSW rate of any pitcher in baseball at 36.9 percent. Through 40.1 innings pitched, Burnes owns a 1.79 ERA, a 0.84 WHIP, a 44.7 percent strikeout rate, and most impressive, a 1.3 percent walk rate. Burnes has been dominant. There is nothing else to say.

Burnes is pounding the strike zone early in the counting and making hitters fall behind early. He is also deceptively causing hitters to chase more pitches out of the zone. Both his called and swinging strike rates as individuals are extremely good! Of the five pitches, Burnes throws, four of them have whiff rates higher than 30 percent. The other, 29 percent. His curve, changeup, and slider all have whiff rates above 58.3 percent.

Corbin Burnes is here to stay. He has put himself in the argument as one of the best pitchers in baseball thanks to his dominant performance. It’s hard to expect Burnes to continue to pitch to a sub-two ERA rest of the season, but a 2.50 ERA ROS would not surprise me.

Zack Wheeler finally looks like the ace that the Phillies paid him to be. His CSW rate of 28.5 percent does not stand out; his improvement from his 23.7 percent rate last season does.

Through 68 innings pitched, Wheeler owns a 2.38 ERA and a 0.94 WHIP. His strikeout rate is exciting at 29.7 percent, but there is a chance there is some minor regression with his CSW rate being just league average. Regardless, Wheeler seems to have reinvented himself and is performing at a high level.

Frankie Montas has been one of the more disappointing pitchers this season. After a good 2018 and a breakout 2019, Montas was underwhelming in 2020. There was hope that he would bounce back to his previous ways. Instead, he has continued to struggle.

No pitcher has seen a high drop in their CSW rate than Montas, whose rate is 6.9 percentage points lower than last year. Montas has seen his strikeout rate plummet to 21.4 percent. His swinging-strike rate is actually right in line with the previous two seasons. But, Montas’ biggest hindrance has been his lack of called strikes. Hitters have adjusted and are making more contact on him.

Montas has improved in May, pitching to a 3.22 ERA over 22.1 innings, but the strikeout rate is still low. He’s tough to start right now, but hopefully, he gets out of his funk and gets back on track.

If you thought Montas has been a disappointment this season, no pitcher has been a bigger disappointment than Kenta Maeda. Last year’s breakout led him to be a top 50 pick in most fantasy drafts this season. His 2.70 ERA and 0.75 WHIP from 2020 have ballooned to 5.27 and a 1.48 this season. He has also seen his strikeout rate drop from 32.3 percent to 20.5 percent. Naturally, his CSW rate is now below league average at 27.3 percent.

Maeda has now found himself on the IL with a groin injury. Maybe the time off while he is healing will be what he needs to get back on track. Maeda has left his slider over the heart of the zone too often, which has caused him to be hit hard. His four-seam and splitter have also had issues that have cost him this season.

It is hard to say what we can expect from Maeda upon return from injury. But you have to imagine that things can go up from here. Hopefully, it won’t be his ERA going up!

This name may come as a surprise as a “faller” in CSW rate. Jack Flaherty has pitched to a 2.53 ERA, a 0.99 WHIP, and a stellar 8-0 record. Flaherty’s strikeout rate is down to 25.8 percent, so naturally, it is not much of a surprise that his CSW rate is lower. After posting a 32.3 percent CSW rate last season, Flaherty has seen that number drop to 28.1 percent this season.

Part of the problem has come from a general lack of swing and misses. Flaherty’s swinging strike rate has dropped nearly three percentage points from last year. His first-pitch strike rate is down nearly seven percent which is a notable number. Contact rates are up and hitters are chasing fewer pitches out of the zone.

Flaherty is also becoming more of a two-pitch pitcher. This is an interesting trend, but he now uses his four-seam and slider more than 80 percent of the time. He is still using his curveball 12 percent of the time, but I wonder if Flaherty has become more predictable? His slider was arguably his best pitch last season. While it has still been good, it has not been that elite pitch we saw in the past. 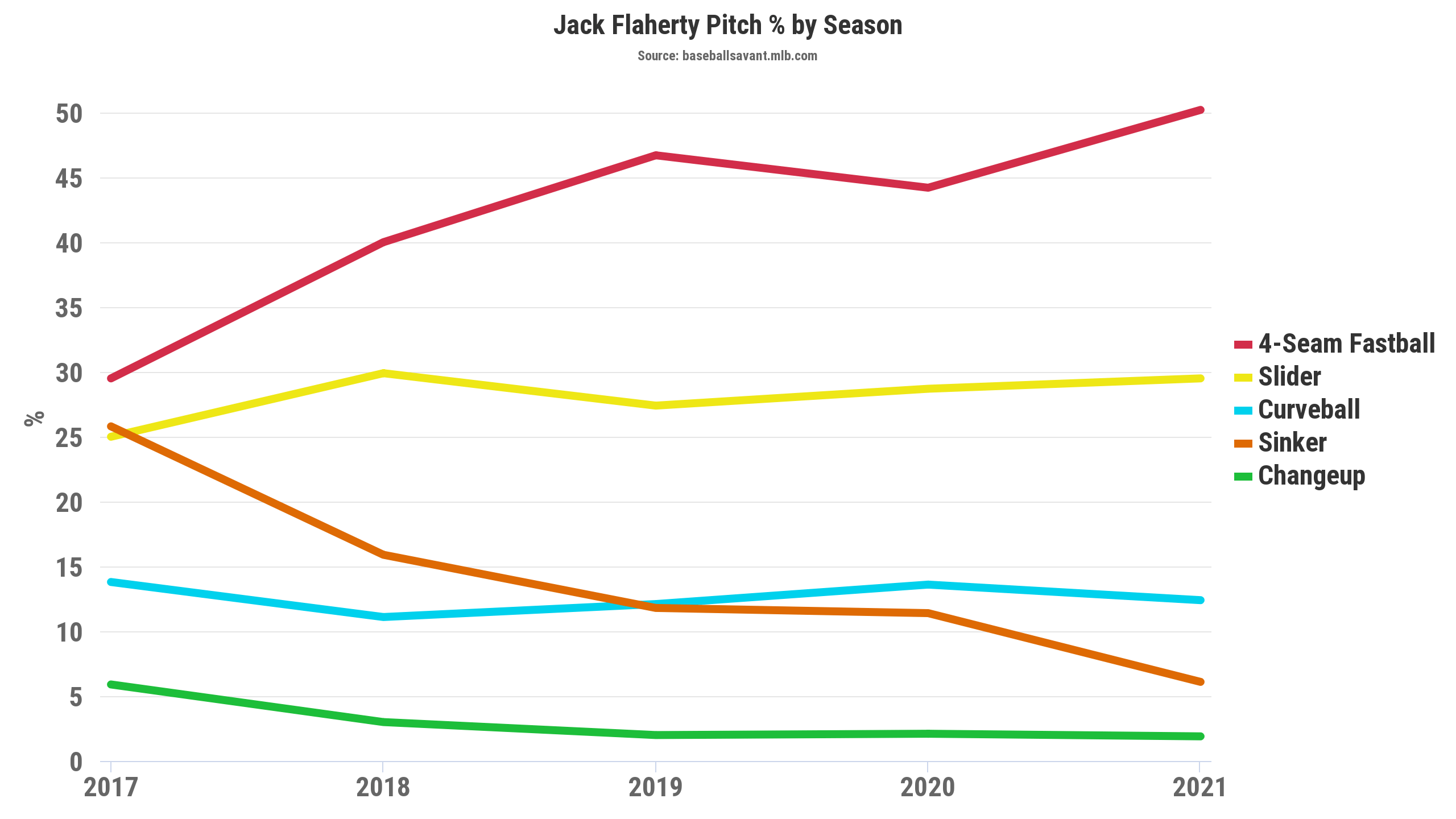 Does this mean regression is coming for Flaherty? Not necessarily. Though it is slightly concerning that his xERA sits at 4.09 and his SIERA is 3.90. Even if Flaherty only posts a 25 percent strikeout rate the rest of the way, he should still be a solid SP1 option for Fantasy.

Thanks for coming back for another edition of statcast standouts. I hope you were able to learn something more about the wonderful stat that is CSW rate. Be sure to head over to check out all our other great Fantasy Baseball content on FantraxHQ.