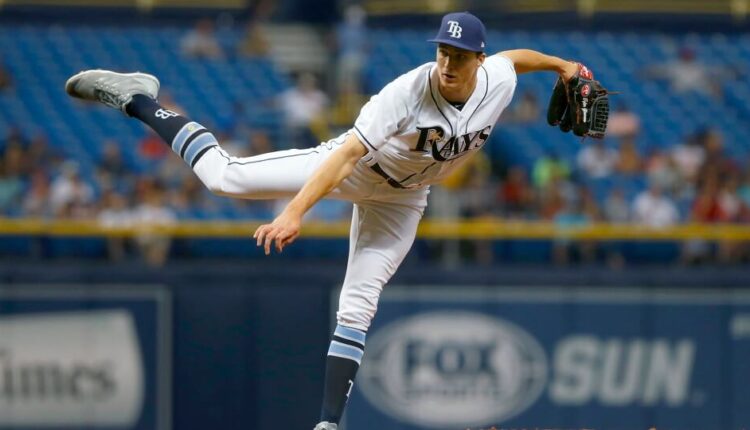 In this shortened 2020 season, you’re going to need every edge you can get. Getting off to a good start is going to be pivotal, especially when it comes to pitching. In 60 games, making up bad ratios is going to be a difficult task. So with the MLB schedule out, I took a look at some starting pitchers that have some favorable matchups to start the season.

First, let’s see which offenses were at the bottom of the league rankings in some key stats. The following chart shows the bottom 10 teams in plate discipline, sorted by their walk-to-strikeout ratio. The second chart shows the bottom 10 teams in WRC+, or weighted runs created plus. A team’s WRC+ is essentially the offensive value of that team compared to the rest of the league, where 100 would be the league average. So, every point under 100 is a percentage point under the league average. 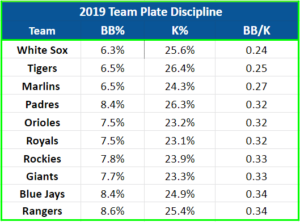 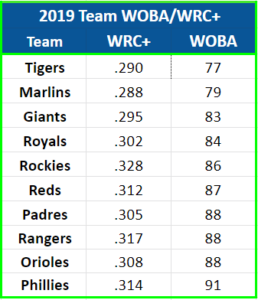 As we can see, no team struck out more than the Tigers, with the Padres and White Sox not far behind. The Marlins added a few veteran bats to their lineup but still had a long way to go from a second-worst 79 WRC+. The Giants offense is just anemic, and they’ve lost one of their best hitters in Buster Posey. The fact that he was still one of their better hitters says all you need to know about chasing this matchup. Meanwhile, the Orioles are also on both lists and lost their most valuable player in Trey Mancini. With that said, let’s see which pitchers can get off to a good start based on early matchups.

Nathan Eovaldi and his new slider have looked great so far this summer. And with Eduardo Rodriguez questionable to start the season, Eovaldi may be looking like the Opening Day starter. He gets a juicy matchup with the Orioles to start the season. Their best hitters may be Hanser Alberto, Renato Nunez, and Austin Hays. Nunez hit .229 vs. righties last season, while Alberto hit .238 against them. Meanwhile, Austin Hays has 138 total MLB plate appearances. Eovaldi could be drafted after pick 250 and used a streamer week one.

Dylan Cease has a Fantrax ADP of 246.89 and an NFBC ADP of 278.42 since June 1. While he does get the Indians twice in the first three weeks, he gets the Royals in his second start and then should be in line to face the Tigers in back-to-back matchups. So three of his first five could come against two of the worst offenses in baseball.

As if you really needed another reason to draft Shane Bieber. He could really put up some tremendous numbers over the first month. Bieber should start the season with matchups against the Royals, White Sox, Reds, and two against the Tigers. That’s four of five against some of the worst teams when it comes to strikeouts. When starters could be making as many as twelve starts, tops, that a good chunk of the season against some favorable matchups.

Greinke’s NFBC ADP of 62.38 since June 1 screams value. His reliability and consistency could help you win in this shortened season. Greinke is one of two starting pitchers last season, including Shane Beiber, to not allow an ERA over 4.00 during any month. And Greinke starts the season with a matchup against the Seattle Mariners. Only the Padres, White Sox, and Tigers struck out more than the Mariners in 2019.

Berrios is one starting pitcher I’m moving up due to the short season schedule. He faces the White Sox to start the year, then the Indians, followed by the Pirates and two against the Royals.

Glasnow was phenomenal in his 60.2 innings in 2019. Now, can he just do that again? Well, he should get off to a good start with matchups against the Toronto Blue Jays unproven lineup. Then a date with the Baltimore Orioles.

Lance Lynn is one of my absolute favorite targets in 2020. Pitchers that can do deep into games really get a boost this year and Lynn should be one of them. I’d be willing to push him up from his Fantrax ADP of 111.98, and NFBC ADP of 113.12. Lynn gets to open the season against Colorado at home. The Rangers’ new ballpark plays more like a pitchers park according to some player accounts. And Colorado was the worst hitting team on the road in 2019 with a .230 batting average and second-worst WRC+ at 74. After the Rockies come to town, Lynn and the Rangers go to San Francisco to face the Giants. And if Lynn can survive the Oakland A’s, he gets the Mariners in what should be his fourth start.

You can pretty much copy what I said about Lynn. While Minor isn’t of the same caliber, he’s got great matchups to start the year and has shown the ability to pitch deep into games. He gets the same matchups as Lynn, except he should face the Angels instead of the A’s in this third start.

The Reds open the season with three games against the Detroit Tigers. That’s good news for Sonny Gray, Luis Castillo, and Trevor Bauer. It can’t get any better than that. Oh, wait, it can, at least for Bauer. He lines up to face the Tigers twice to start the year. Then he gets the Indians followed by the Royals and Pirates. If Bauer can keep his control in check, he could be in for a great start.

Urias and Wood line up to face the San Francisco Giants twice in their first three matchups, with a game against Arizona in between. There are high hopes that Urias realizes his potential now with a spot secured in the rotation. And Wood returns to Los Angeles where he had some success before. Wood is the easier of the two to obtain with a Fantrax ADP of 261.09 and NFBC ADP of 249.12 since June 1.

Lopez and Yamamoto get the Baltimore Orioles to start their season. I’ve noted the Orioles’ struggles against right-handed pitchers earlier. So, in a deep league, they could be decent week one streamers.

Which starting pitchers are you targeting in your drafts? Let us know in the comments below.