Staff Roundtable: 2020 Breakout Pitchers We Believe In For 2021

With only 60 games played in the 2020 MLB season, we witnessed a plethora of breakout performances. Now, we have to sift through them all and decide what breakouts we believe in and what ones we don’t trust. That’s what we’re going to try and do today as we discuss which 2020 breakout pitchers we believe in for the 2021 fantasy season and beyond.

For my pick here, I almost went with Sixto Sanchez, a more than worthy selection. But since I already wrote a deep dive about him right after the 2020 season ended, I’m going to go with my other pick with Corbin Burnes. While he’s always had nasty stuff, I can see why some might be a tad skeptical about this breakout after Burnes posted an 8.81 ERA in 32 appearances in 2019. No matter how short the season is, going from an 8.81 ERA to a 2.11 ERA is about as drastic a change as one can have. And while that 2.11 mark will be hard to replicate, I’m fully on board with Burnes as a fantasy SP2 and borderling ace moving foward. Here’s why.

Most pitchers have two or three really good pitches they can put hitters away with, some four. Well, Burnes has five pitches (out of six) with a whiff rate above 33% and/or a putaway rate above 20%. His cutter, slider, changeup, and curveball meet both of those thresholds with the slider leading the way in both with a 60.3% whiff rate and 35.2% whiff rate. That putaway rate ranked 8th in baseball for sliders and only some guy named Shane Bieber had a higher whiff rate on the pitch. 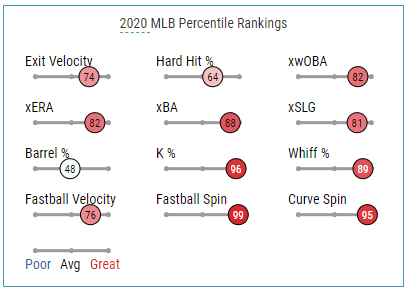 On top of that, every Burnes offering except the sinker had an xBA well below .200 with the slider and curveball hovering around .100. When you have this many quality pitches you can go to in any given start, that minimizes the liklihood of a blowup start if one of your pitches isn’t working for you that day. You can say the same thing in games against batters from each side of the plate as well. Burnes doesn’t limit himself to specific offerings versus lefties or righties. The only pitches he uses less is the slider against lefties and the changeup against righties. If you’re an opposing batter, you still have to be ready for four or five different offerings from Burnes in any given at-bat. Good luck trying to gameplan against that.

As I mentioned, some will be a tad skeptical due to the massive turnaround from 2019, but Burnes is very legit moving forward. I have him as a top-20 pitcher for 2021 and I wouldn’t be surprised if he’s in the top-10 discussion in 2022 drafts. Draft with confidence and enjoy the ride.

I admit that I did not buy into Dinelson Lamet as a breakout candidate going into this past season. Man, was I wrong. Lamet flourished in 2020, finishing sixth among pitchers in our Player Rater despite racking up just three victories on the year.

Upon his return from surgery in 2019, Lamet was tinkering with his arsenal a bit. He began throwing a curveball to go along with his slider. Lamet continued to tweak and alter the break on both of his offspeed offerings last year. The curve acted almost like a second slider, which seemed to have been his intent, and both pitches were highly successful. His fastball averaged about 96 miles per hour, but hitters handled it rather well. Lamet was solid over 14 starts last season but took his game to another level in 2020.

This season, he added a tick to his fastball, averaging just over 97 miles per hour with his four-seamer. That add velocity made a huge difference. After slugging .624 off his fastball in 2019, hitters slugged just .462 against the heater in 2020. He also focused solely on the slider as his main breaking pitch, increasing its usage from 12.2 percent in 2019 to 53.4 percent this year. His 559 sliders were far and away the most in baseball, with Patrick Corbin’s 430 finishing a distant second.

Lamet featured the slider with good reason. It was one of the best pitches in all of baseball. Of the 141 pitches that were thrown at least 300 times in the Majors in 2020, Lamet’s slider was first in run value (-19) and opposing batting average (.080), while finishing second in opposing slugging percentage (.120) and third in whiff percentage (47.4).

Because of the truncated season and Lamet still working his way back, he only averaged 87 pitches per start this season. I would expect that number to rise in 2021, which should account for some added strikeouts. He should also see a significant increase in his win potential if he can last a little longer than the 5.75 innings he averaged in 2020. The Padres are a team on the rise with a tremendous bullpen behind him. It is scary to think that Lamet can actually improve upon his 2020 breakout, but that is highly possible as long as there is no setback with regard to his bicep injury.

2020 was the year of the breakout pitcher in MLB. Pitchers like Kenta Maeda, Dinelson Lamet, Corbin Burnes, Devin Williams, Zach Plesac, Max Fried, and Dylan Bundy are several pitchers who broke out. The breakout pitcher I am buying for 2021 and beyond is none of those guys. It is Zac Gallen. No more “Boyd Boys,” I am a “Gallen Guy.” I plan on getting the full gallon of Zac Gallen in all of my 2021 leagues.

Zac Gallen gets exceptional results that stem from his incredible four-pitch mix. He mixes his pitches exceptionally well and uses each at least 16 percent of the time. Gallen knows how to use them at the appropriate time, and he commands his pitches extremely well.

The strong results are back by a 32.6 percent called plus swinging strike percentage(CSW) and a 38 percent ground ball rate. A pitcher who can produce high strikeout numbers while also keeping batted balls on the ground have a high probability of success. Gallen may never be the flashiest pitcher, but his floor is extremely high. I feel confident in saying Gallen will be a top 15 pitcher in 2021 with the potential to be top 7.

When the staff roundtable question came up of who is the SP4 in 2021, I almost went with Kenta Maeda. On Fantrax scoring, Maeda ranked as the 6th best starting pitcher and the 4th best starting pitcher on the Razzball Player Rater. Similar to Voit, Maeda’s ADP likely rises with the elite performance in 2020, and I believe in Maeda as a breakout pitcher.

Ian Anderson is my pick for the breakout pitcher that I am buying. He looks to be equally as good as his teammates Max Fried and Mike Soroka in terms of the quality of contact that they give up. It’s simple to see in his baseball savant profile, as it is lit up with dark red. 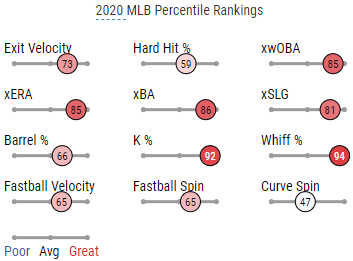 There aren’t many better-looking baseball savant profiles than that. 99th percentile in barrel rate and xISO. 95th percentile in xERA and xwOBA. And he is a heavy groundball pitcher, as his 52.5% groundball rate is excellent as well. Now we factor in that he has a lot of swing and miss in his game, and you could quickly make the argument that Anderson is going to be BETTER than Fried and Soroka.

The biggest worry is his control. Anderson has always had over a 10% walk rate or higher throughout the minors, and he sat at 10.1% in 2020. If he is going to rely on his changeup and curveball as much as he does, he will need to start getting them in the strike zone more often as 64.4% of his walks in 2020 came from his changeup failing to find the zone.

Even with that potentially scary walk rate, I think Anderson is going to be an excellent buy in 2021 drafts. He looks to be the next Braves pitcher that excels in limiting hard contact, the difference being he can strike hitters out at an elite rate. Buy Ian Anderson in 2021.