Staff Roundtable: Hitting Prospects to Target in Fantasy in 2021 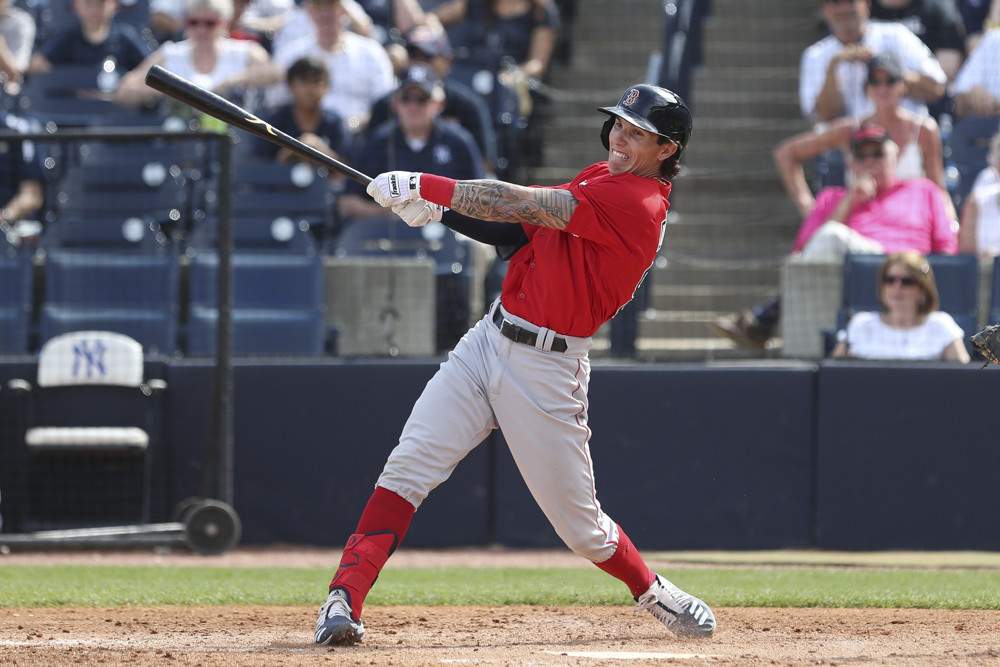 The 2020 MLB season saw plenty of talented prospects debut, both at the plate and on the mound. Names like Jo Adell, Luis Robert, Nate Pearson, and Casey Mize all made their MLB debuts during the season, along with a plethora of others that we all rushed to the waiver wire or made significant FAAB bids to acquire. It’s always hard to predict what prospects will debut every season, but 2021 is shaping up to be another big season for prospect promotions with the likes of Jarred Kelenic, MacKenzie Gore, and Wander Franco likely getting the call at some point. For this staff roundtable, we’re focusing on some intriguing hitting prospects we like for 2021, not tamed Kelenic or Franco. That would just be too easy to pick one of those two studs.

Intriguing Hitting Prospects to Target in 2021

For me, the hitting prospect outside of Wander Franco and Jarred Kelenic that I believe will make the biggest fantasy impact in 2021 is Andrew Vaughn of the White Sox. Despite a loaded lineup basically 1-9, the White Sox appeared to have intentions of getting Vaughn’s bat in the lineup late in the 2020 season, even working him out at third base in September. While Vaughn never did make his MLB debut this past season, how the White Sox handled him shows that he’s very close to making his Major League debut.

Vaughn, the #3 overall pick last June, was considered to be arguably the best and most advanced bat in the 2019 draft class along with top overall pick, Adley Rutschman. He excelled every single season at the University of California finishing with a stellar .374/.495/.688 slash line and 50 home runs in his 160 collegiate games.

Throughout his time at Cal, Vaughn showcased both his plus hit tool and plus raw power while also displaying an advanced plate approach and exceptional zone awareness. While he’s not a big guy in general at 6’/215, Vaughn has a very strong frame, especially in his lower half, which combined with his quick hands, allows him to create plenty of torque and bat speed with a swing that generates natural loft. Will he be a 40-homer masher? Probably not. But Vaughn’s hit/power combination should allow him to pump out some .300/30+ seasons for the White Sox along with solid counting stats due to all the offensive talent that will be around him.

Now, the big question is where does he fit into the lineup in 2021? The answer to that question rests on the $12 million club option for Edwin Encarnacion. While E5 was once a feared slugger, he’s now an aging 38-year-old DH-Only option coming off a horrific .157 average in 2020. It seems pointless to me for the White Sox to pick up that option when they could just plug Vaughn in at DH after they gain another year of service time a month or so into the season. Keep an eye on this situation throughout the winter.

There are a plethora of excellent hitting prospects that are likely to debut in 2021. Wander Franco and Jarred Kelenic are the top two prospects in the game who fall in that category. I am going off the cusp on one of my favorite prospects who I think could make a significant impact on the Red Sox lineup in 2021, Jeter Downs.

Downs brings a great feel to hit to the plate and has solid barrel control through the zone. He also hits the ball to all parts of the field well. Downs may not be the fastest runner, but he is extremely efficient on the base paths. Between 2018 and 2019, he stole 61 bases.

Jeter Downs has a nice path playing time at second base for the Red Sox in 2021. They will still have Dustin Pedroia and Michael Chavis that can play second, but Pedroia has struggled to stay healthy, and Chavis has been below average at the plate. Downs could make his way into the lineup by mid-summer and solidify his spot with a solid performance. There is plenty of Fantasy upside here as Downs provides a nice power/speed floor with a good hit tool. Even though he will likely not be drafted in redraft leagues, he is a player you will want to own when he comes up.

After Jarren Duran was drafted by the Red Sox in the seventh round out of Cal State Long Beach, the team began working on his swing. In his entire three years at Long Beach, Duran hit just two home runs. This fact becomes more surprising when you look at Duran; he’s a solid 6’2”, 200 lbs of lean muscle with a smooth lefty swing. The Red Sox started unlocking more loft in his swing and he tore through the majors destroying every level. He posted a wRC+ of 173 at Short Season, 151 at Low-A, and 191 at High-A. These weren’t empty numbers either, over the 117 games across these levels he filled the stat sheet with 7 home runs and 42 stolen bases while slugging well over .500.

Once Duran reached Double-A Portland in the second half of 2019, he began to get busted inside with the fastball. It reflected in his numbers as his wRC+ dropped to just 87. To combat this newfound weakness, Duran underwent a swing change this offseason looking to do two things: lift the ball more and not get beat on the inside fastball. His hands are now held at the chest before his load and the swing path is far more direct. The results were incredible. Playing at the alternate training site Duran was mashing home runs and not showing that same weakness inside.

Here is a side-by-side video of the two home runs Red Sox prospect Jarren Duran hit this week. You can really see the changes he made this offseason with his swing path to try to get to pitches on the inner half and drive the ball in the air with authority. pic.twitter.com/SFKXliqdws

His scouting report at SoxProspects.com notes that he can recognize spin and that he has potential for an above-average hit tool. With the new swing changes, he is utilizing his pull side much more and has the potential to unlock even more power later. In fantasy baseball where speed is at a premium, Duran is truly exciting. He is a plus runner who is also instinctual and who should challenge for 30 plus stolen bases if given regular playing time. In fact, I think Duran can become a 20 HR/30 SB regular.

The path to Duran becoming a regular starts with his continuing to refine his defense in the outfield. He was a converted infielder and is still learning how to get reads on the ball and take the right routes, although his athleticism makes up for a lot of his mistakes. He isn’t ready to take over for Jackie Bradley Jr. in centerfield yet, but if his defense continues to improve he should find himself in Fenway by the end of next year.

With no minor league seasons, it made it difficult for me to find my favorite hitter prospect for 2021. I landed on a hitter that made his MLB debut for a short stint in 2020 for the Marlins in Lewin Diaz. Through 41 plate appearances, Diaz totaled two doubles, zero home runs, two runs, and three RBI while slashing .154/.195/.205. With such a small sample size, it’s safe to toss out his 2020 stats. Outside of Jesus Aguilar and Garrett Cooper, Lewin Diaz projects for potential playing time at first base in 2021.

I half-joked about the body composition change for Luke Voit in an earlier staff roundtable article, and Lewin Diaz also adjusted his body composition heading into the 2019 season. We notice differences in the tweet above and below this paragraph. He’s 6-foot-4, a lean 225-pounds, and in the best shape of his life. With his large frame, long arms, and long legs, a buddy of mine, Joe Drake, who does scouting work for Prospects Live, reminded me that it could limit his hit tool. Fangraphs graded Diaz’s hit tool about average and typically displayed a healthy batting average throughout the minors. The main takeaways for why I think he’s an impact prospect in 2021 include opportunity, plus power, body changes, and a good enough hit tool.

If you like prospects who can hit the ball a mile and profiles to be a stud in OBP formats, Nolan Jones should be one of the prospects you are targeting in your 2021 drafts. I mean just look at these beauties (shoutout to @indiansPro no one does a better job of promoting Cleveland’s prospects).

#Indians top prospect 3B Nolan Jones 8 (AA) HR's over his 49 games with the Akron Rubberducks. Jones was promoted to Akron from Lynchburg on July 8th 2019. The 2016 2nd Round Draft Pick could see Cleveland as soon as 2020.@Nolan_Jones10 @excelsm #Future pic.twitter.com/uv8Hn5sSSb

Jones is one of Cleveland’s brightest prospects who are on the verge of making his major league debut, and very well could be a contributor for your fantasy team(s).

Jones provides power, who doesn’t these days besides Nick Madrigal, but he has the chance to be a perennial 30 homer bat and asset in the power department for you. He shows plus raw power and does a great job of translating that raw power to game power. Jones also has a pretty pull-heavy approach at the moment, taking the ball to rightfield and even more optimizing his plus power. He does make enough contact to get to his power in the game.

One of the more exciting aspects of Nolan Jones’ game and why he’s my favorite non-elite prospect to draft in 2021 is because of the walk rates. I know walk rates aren’t the sexiest thing but Carlos Santana is always a value in drafts because he draws his fair share of walks, which leads to more run opportunities in the fantasy game. At no stop in the minors has Nolan Jones ever posted a walk rate below 14%. He does have a passive approach and at times will get wrung up by umpires because he likes to work counts waiting for the right pitch, which is why his k rate is high. I doubt he ever posts 20% walk rates as he has done at some of his minor league stops but I could envision a big-league hitter who hovers around 12% which would be massive.

2021(that feels weird to say) could be the year in which Nolan Jones makes his major league debut and becomes a starter for your fantasy roster. He marries power and a high OBP at what should be a low cost and could see time at first or in the outfield, adding some positional versatility to his fantasy game. He is near ready-made to be plugged into the middle of Cleveland’s roster and potentially be a contributor. I would buy Nolan Jones in any fantasy baseball format.