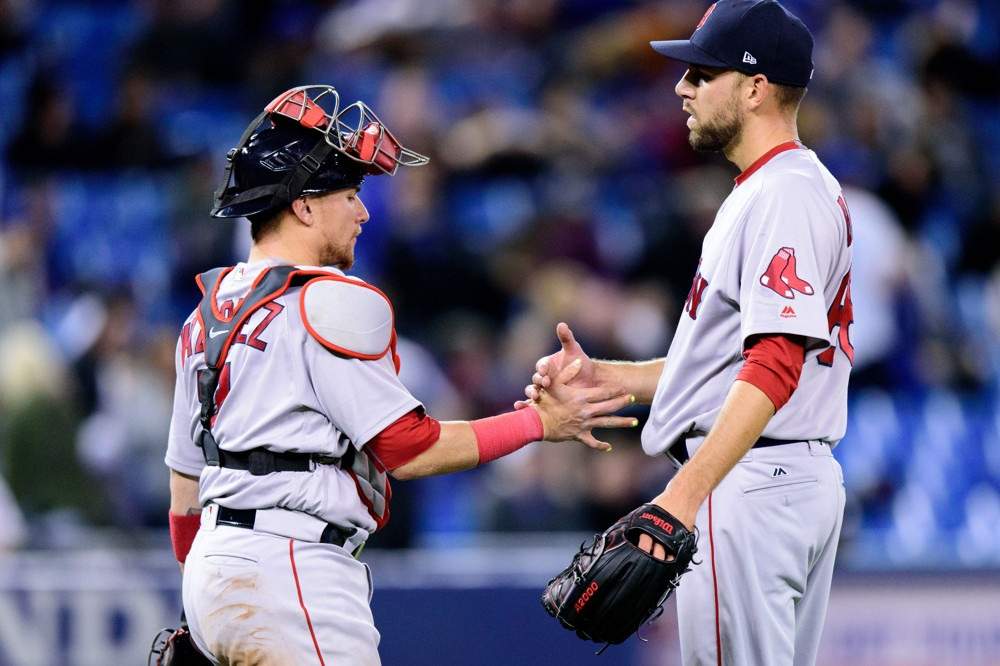 Don’t let the slowness that is the offseason fool you, baseball is here! Pitchers and catchers have already reported, despite there still being a few big names on the market. Spring training games begin a week from today so it’s time to identify some of the AL spring training position battles.

I’ll be following the AL spring training position battles closely and we’ll get a much clearer picture as we approach first pitch in the 2019 season. Most of the position battles in the American League are surrounded around the fifth and final spot in a rotation. That’s not always appealing from a fantasy standpoint, but we’ll pay close attention anyways. Make sure to check back every Thursday as we get a clearer picture.

Craig Kimbrel remains unsigned so it’s possible the Red Sox still bring him back. If not, the Ryan Brasier and Matt Barnes competition throughout spring training is one you’ll want to pay close attention to. Barnes has two career saves, while Brasier has none. The loss of Kimbrel and Joe Kelly (Dodgers) should not be overlooked.

This isn’t as much as a battle as it is a platoon. Mitch Moreland will hit against righties and Steve Pearce will face lefties. There will be times when the Red Sox’s ride the hot hand, but you can always bank on Pearce getting the call against LHP.

As mentioned above, most of the battles in the AL are for the fifth spot in a rotation. Chances are, if you’re battling for the final spot on a team like the White Sox, well…it’s probably a battle you’ll likely want to see play out into the season before you spend draft picks.

Dylan Covey has a 5.10 ERA over 33 starts with the White Sox in the last two years. He doesn’t strike anyone out (6.20 K/9) and like Banuelos, he has a high walk rate for his career (4.04 BB/9). Covey had a 55.1 ground ball rate over 121.2 innings last season, which is a huge plus considering where he pitches. On the flip side, he has a ridiculously high 84.6 contact percentage for his career with just a 6.7 SwStr%

The White Sox landed Kelvin Herrera and Alex Colome during the offseason and both have closer experience. My initial thinking had Herrera as the team’s closer on opening day, but that’s not a given. Chicago parted ways with a solid hitting catcher in Omar Narvaez for the likes of Colome, so they are definitely high on him.

Also, Herrera had offseason surgery to repair a torn Lisfranc ligament in his left foot. If he stumbles during spring, or suffers any kind of setback the job will go to Colome. It’s Colome who has the higher strikeout upside and with 96 saves in the last three seasons compared to 55 from Herrera.

The Detroit Tigers signed 29-year-old lefty Matt Moore this offseason, which killed a bit of hope those had left for Daniel Norris. While Norris may be more suited for a job out of the pen, it’s not a lock he’ll stay there all season.

Moore only started 12 games last season for the Texas Rangers and did most of his damage out of the bullpen. I say damage, because Moore had a 6.79 ERA over 102 innings.  His strike out numbers continue to decline and his walk rate continues to rise. He’s also given up 71 home runs in the last three seasons. This is an important spring for Norris if he wants to get back in the rotation.

The Tigers would love for Grayson Greiner to be the guy behind the plate for them in 2019. In fact, manager Ron Gardenhire has made it clear that’s going to be the case. Greiner made his Major League debut last season, but was pretty quiet overall. The rookie had a .219 average over 166 plate appearances. He had zero home runs with a 27.6 strikeout rate and 14.7 walk rate. He showed a bit of power in the minors, but has a lot left to prove. At 6-foot-6, Grayson will be the game’s tallest catcher, and believe it or not, that’ll be an adjustment for some of the new pitchers, like Matt Moore.

I don’t really expect much of a battle this spring for the fifth spot in Houston’s rotation as I already feel like Josh James has that on lockdown. That said, Charlie Morton, Dallas Keuchel (I think) and Lance McCullers (Tommy John) are gone. Collin McHugh heads back into the rotation with Wade Miley grabbing the other spot.

Forrest Whitley has all kinds of game to his name, but only has 10 AA starts on his resume. They have been very impressive starts and he’s shown tremendous strikeout potential (15.95 K/9 in 14.2 AA innings in 2017, followed by 11.62 in 26.1 innings last season). Whitley will find a way in the Houston rotation, it’s just going to take a bit of time. No doubt, we’ll see him in 2019.

Jaime Barria, Nick Tropeano and Felix Pena will battle for the fifth spot in Los Angeles’ rotation. The Angels signed Matt Harvey and Trevor Cahill, but neither have the best track record when it comes to health and productivity.

Pena out-pitched Barria and Tropeano last season, but will be in a stiff competition this spring. Pena has the highest strikeout upside (8.26 K/9), and the best ground ball rate of the three.

Second Base: David Fletcher vs. Taylor Ward vs. Luis Rengifo

David Fletcher has the inside track at the starting position at second base thanks to a .275 average over 307 plate appearances last season. He filled in for the injured Zack Cozart, who is healthy and ready to return to third.

If Taylor Ward out performs Fletcher, he’ll move to third and Cozart would move back to second base. Cozart has the highest fantasy ceiling of the three and he’ll get everyday playing time. He could also go back to being the team’s leadoff hitter which was the case before his shoulder injury. There’s definitely some value in that position, with Mike Trout and Justin Upton hitting behind him. Luis Rengifo is a fine looking prospect who has an outside chance of making the opening day lineup.

You know how I feel about Michael Pineda…I like him, but it’s been a while since we’ve seen him pitch in the bigs. He’ll have every opportunity for a spot inside the Twins’ rotation as he works his way back from Tommy John surgery. Follow his spring and don’t be surprised if his ADP rises if he looks anywhere near the pitcher he looked like pre TJS.

Closer: Blake Parker vs. Trevor May

Trevor May made 24 appearances last season and had only three saves. He rocked a 12.79 K/9 and 1.42 BB/9. Those are very solid numbers. Blake Parker saved 14 games for the Angels last season, with a little lower K/9 (9.50) and a little higher BB/9 (2.58) than May. It’s May who is probably better suited for the eighth inning, with Parker having more experience as a closer.

Willians Astudillo may be a fan favorite and fantasy darling due to this terrific plate skills, but he’s already behind the eight ball. Astudillo hasn’t arrived at spring training yet due to visa issues. He’ll likely come off the bench to start 2019 anyway as Jason Castro is a much better defensive catcher. Astudillo does have experience playing multiple positions, though, which should get him to about 300 plate appearances in 2019.

Now this is a battle! The Oakland Athletics have at least three spots in their rotation up for grabs as far as I’m concerned. They may also sign a guy like Gio Gonzalez, if someone doesn’t step up during spring. Right now, roster resource has Brett Anderson, Daniel Mengden and Frankie Montas in the rotation. That looks pretty good to me, but spring will tell all.

I’m just here to talk about Jesus Luzardo because he has the highest ceiling of the bunch. It’s really not even close. Luzardo only has 16 AAA innings under his belt, so don’t take too much stock into his 7.31 ERA (four starts). Luzardo probably won’t make the A’s out of camp, but he’ll be a hot waiver wire grab and he’s a great stash on draft day. 100 plus innings with a 9 K/9 is happening.

Ryon Healy will get most of his playing time at first base, but Edwin Encarnacion and Jay Bruce will play first as well. I’d imagine Edwin will serve as DH a majority of the time with Bruce splitting PT in left field with Domingo Santana. The way Jerry Dipoto likes to deal, Healy may be the next one out the door.

What the Tampa Bay Rays do with the back-end of their rotation is beyond me. They were one of the few teams who changed the game last season when they decided to start games with their relievers and then turn things over to guys like Ryan Yarbrough.

This rotation will be led by Blake Snell, Charlie Morton and Tyler Glasnow. After that is anybody’s guess. Jacob Faria would be next in line for me as he showed some promise in 2017, but struggled last year and was demoted to the bullpen. Let’s not forget Brent Honeywell and Jose De Leon are expected back at some point this season.

The Rays have so many versatile players which will allow manager Kevin Cash to be as creative as he wants to be. Yandy Diaz – who played third last season – is expected to play first base during spring training. Ji-Man Choi will play some first as well, but he should split time at DH with Avisail Garcia. Tommy Pham, Kevin Kiermaier and Austin Meadows have the edge on Garcia in the outfield and that shouldn’t change. Unless of course, Kiermaier goes down again.

The Texas Rangers rotation has the ability to be disastrous. Mike Minor will get the ball on opening day, followed by Lance Lynn, Drew Smyly, Edinson Volquez and then Shelby Miller. All guys who had promise at one point, but guys we’ll no doubt pick on in the DFS community. Minor is the only returning pitcher in the Rangers’ rotation, and while the other guys have a chance to stick, injuries have been an issue for all of them.

Doug Fister, Bartolo Colon and Yovani Gallardo are gone, and with that the Rangers are hoping they improve on their 5.37 staff ERA from last season (second highest in Majors). Volquez is coming off Tommy John surgery, so he’s the one to watch, but him and Miller should be penciled in ti the rotation. Don’t be surprised if we see Jason Hammel or Ariel Jurado sprinkled in, though.

The real winner in this battle is Lourdes Gurriel Jr. who should play almost every day and has the benefit of being able to move around the diamond. Freddy Galvis will get plenty of playing time this season and when he does it’ll be at shortstop. Devon Travis won’t play short, he’ll play at second base when he gets in the lineup.

Teoscar Hernandez and Billy McKinney will compete for playing time in left field. Kevin Pillar has center field on lock down and Randal Grichuk will play RF. McKinney started 31 games for Toronto down the stretch last season as he was part of the J.A. Happ deal with the Yankees. He wasn’t bas either as he posted a .252/.318/.462 slash line. For me, Hernandez has more promise and upside in his game.