Spencer Howard Breakdown: Is He a Future SP1? 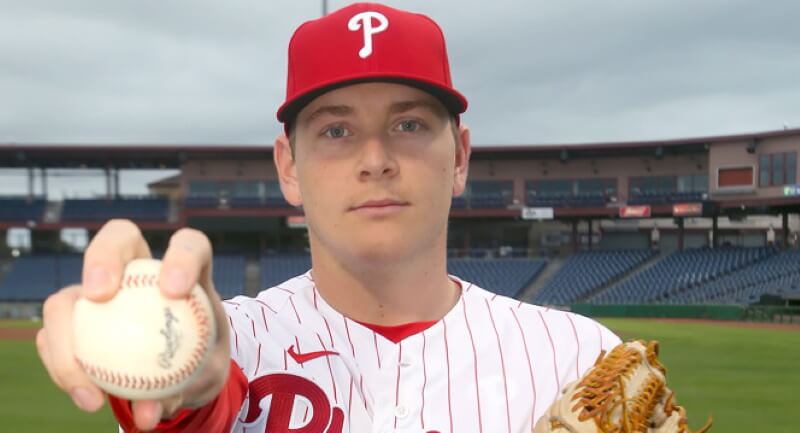 Spencer Howard made his much anticipated Major League debut on Sunday against the Atlanta Braves. Among many exciting prospect debuts in 2020, Howard was one of the players I was most looking forward to watching. Unfortunately, It was not the start that most fans were hoping for, as Howard could not finish the fifth inning. He allowed four earned runs, seven hits, but just one walk in 4.2 innings of work. Howard’s stat line was not stellar, but his start was a building block for a successful future. The question remains, what is Howard’s upside and how great can be? I will look to answer these questions.

Can Spencer Howard be an Ace?

A decorated college career at Cal Poly led the Phillies to draft Spencer Howard in the second round in 2017. Howard finished his Mustang career with an 11-and-two record and a 2.24 ERA in 124.1 innings pitched.

Since being drafted by the Phillies, Howard has done nothing but improve and refine his elite arsenal. In three minor league seasons, Howard has a career 3.28 ERA in 211.1 innings pitched that included 281 strikeouts and 74 walks.

While being reliable in his first two seasons with the Phillies, Howard blossomed in 2019, which saw him see a significant rise in most prospect rankings.

Including the Arizona Fall League in 2019, Howard produced an incredible stat line of a 1.99 ERA, a 0.84 WHIP, 28 walks, and 133 strikeouts in 99.1 innings. Howard established himself as one of the best pitching prospects in baseball, featuring an incredible pitch mix. After seeing Howard pitch multiple times last season, I was bullish on ranking him as the 21st best prospect in baseball. Despite a shoulder injury that kept him out two months of the season in 2019, Howard’s four-pitch mix and improving command flashed the ability to be a frontline starting pitcher.

Spencer Howard’s four-pitch mix features three plus offerings as well as an improving curveball that could eventually be an above-average offering with time. As I previously mentioned, Howard’s arsenal is a big reason why he could eventually turn into a future frontline starting pitcher. Lets breakdown his pitches.

Spencer Howard’s fastball has a future 70-grade on the 20-80 scale, which is quite impressive. In the Arizona Fall League last season, Howard sat 95-to-98 miles-per-hour but touched triple digits with nice arm side run.

In his start against the Braves, Howard sat between 94-96 miles-per-hour but eventually tapered off to around 90-to-92 miles-per-hour in the fifth inning. Despite the decline in velocity during the start and poor command to start, he did command it better throughout the outing. 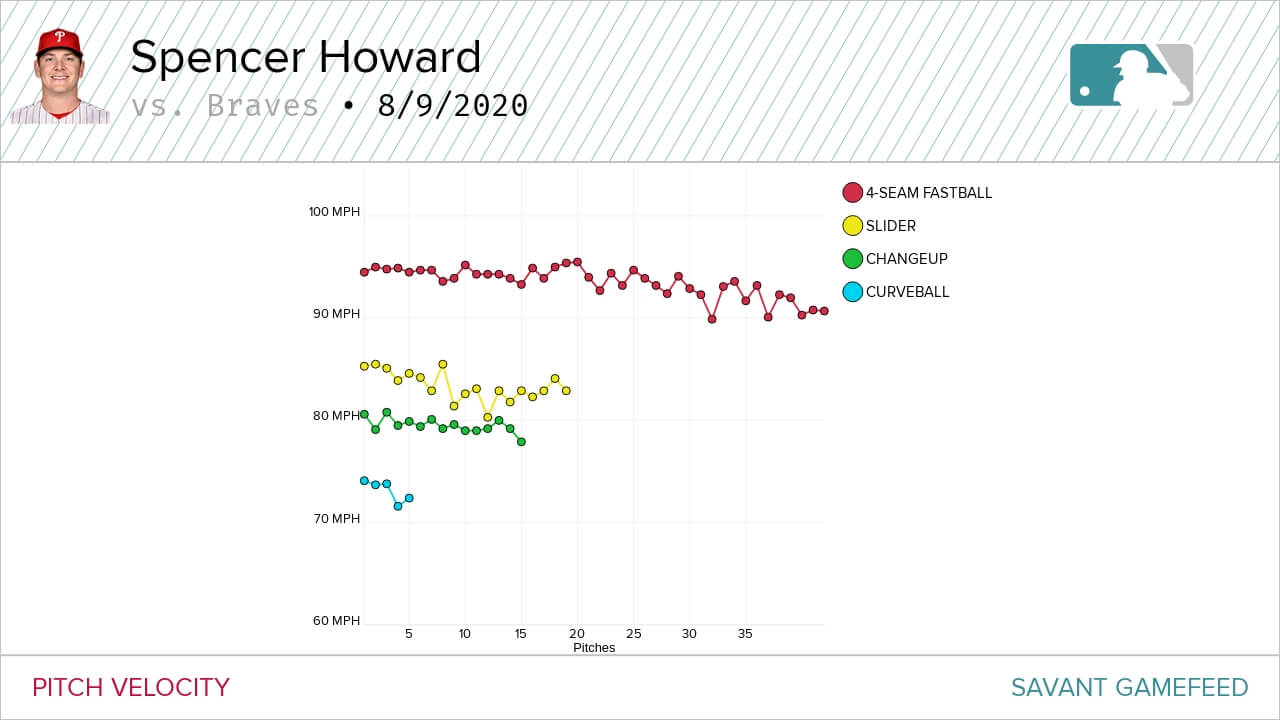 He did give up a home run to Freddie Freeman on his fastball, but Howard placed it well, and Freeman showed great ability to hit a pitch on the outside corner. His fastball command was spotty in Sunday’s start, but throughout his career, he has had an above-average control with that pitch. 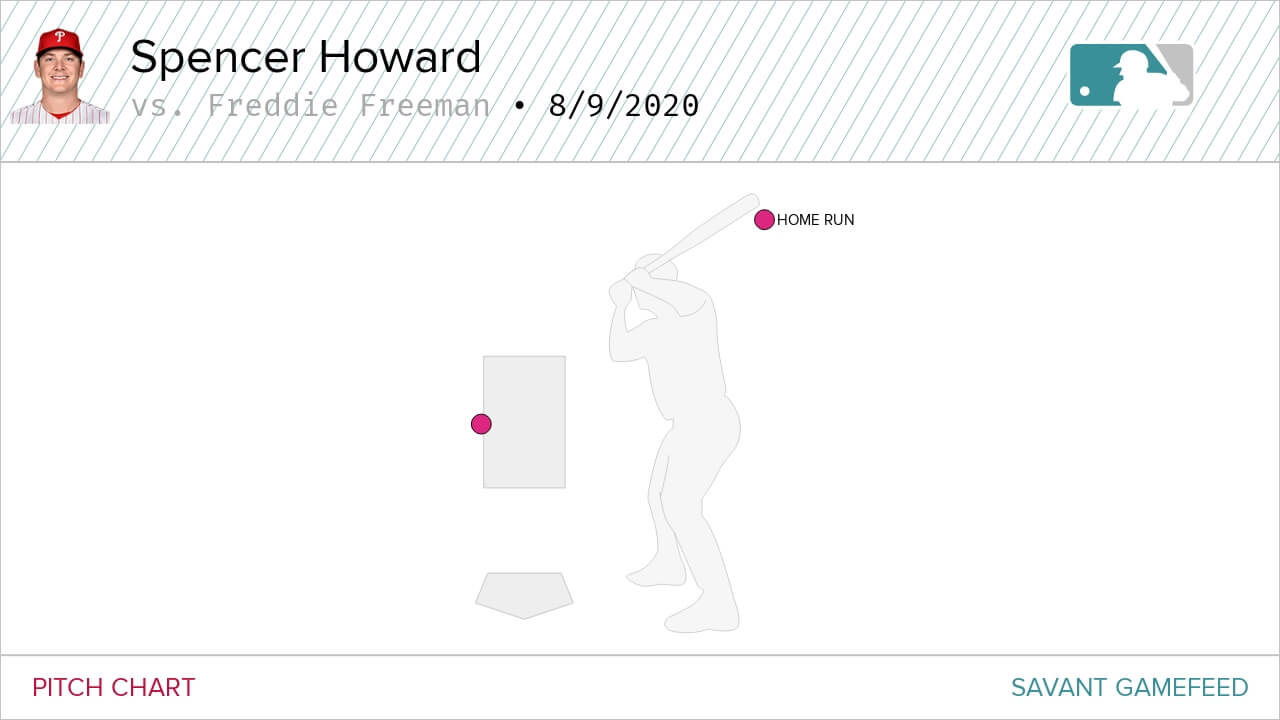 As good as Howard’s fastball is, his changeup is equally as good, being a borderline 70-grade pitch. That gives Howard two potential plus-plus offerings. His changeup plays exceptionally well off of his fastball, having a significant velocity differential. Howard throws it at any point in the count and is not afraid to throw it multiple pitches in a row, especially against left-handed hitters.

The changeup has a nice fade and downward action, deceptively fooling hitters, as you can see in the video below. In the start against the Braves, Howard threw his changeup 15 times, getting six swinging or called strikes for a 40 percent CSW rate. Howard’s changeup and fastball combo are a big reason why he has the capabilities to be a highly successful starting pitcher.

Spencer Howard’s slider is currently a 55-grade pitch but has the offerings to potential to be a plus pitch, as you can see demonstrated with his strikeout to Marcell Ozuna in the video below. The slider stood out against the Braves, inducing a 54 percent swinging-strike rate, and a 47 percent CSW(Called +Swinging Strike) rate. The slider devastated hitters and was dominant outside of the Ronald Acuña’s home run, which was a well-placed pitch that happened to be struck by one of the best hitters in baseball. 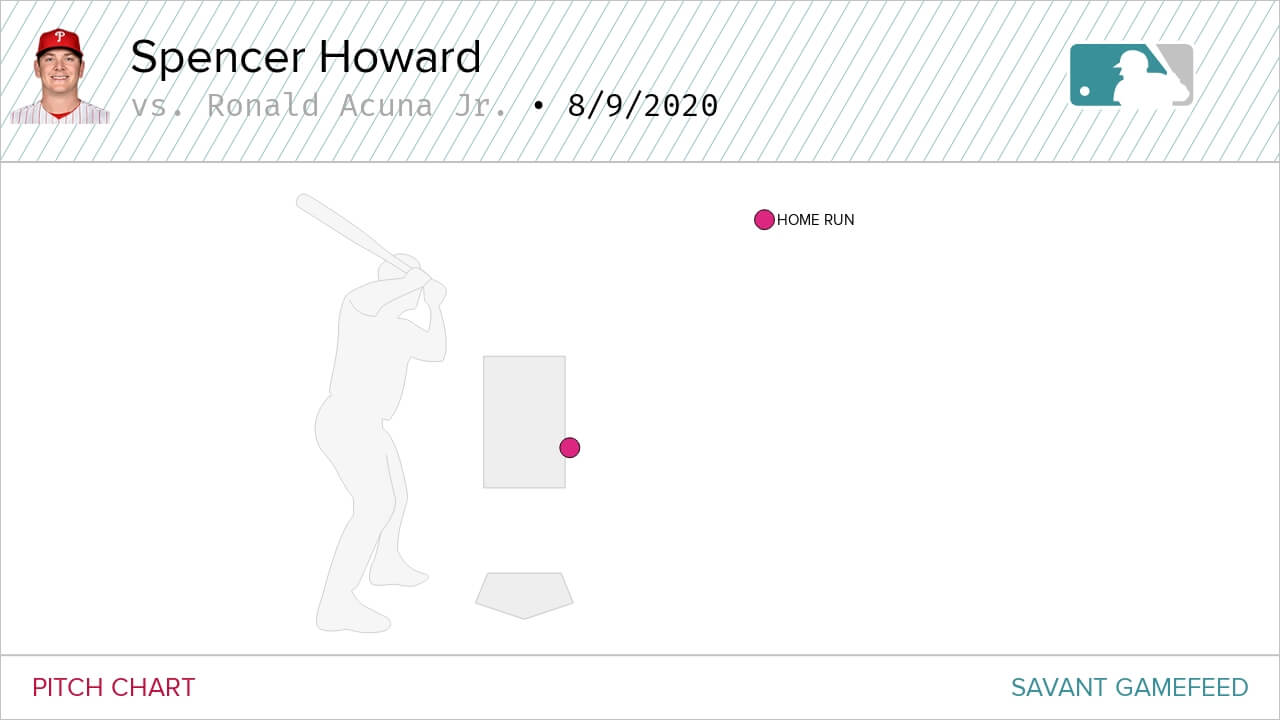 Howard’s curveball is the worst of his four but is still a 50-grade pitch with the potential to be above-average in the future. The movement on this pitch is already plus, getting many swing-and-misses in the dirt. The 12/6 action often starts at the hitter’s neckline and drops below the belt, getting many called strikes. Howard only threw his curveball five times in the start against the Braves and got one swing-and-miss on it. Commanding the pitch better will take work by Howard,

Spencer Howard has a balanced, repeatable delivery, that could lead to improved command with time. His control with his fastball and curve are above-average, but the breaking pitches still need refining. Each season, Howard has improved his walk rate, decreasing his walks-per-nine from 5.7 in 2017, to 3.2 in 2018, and 2 in 2019.

It was encouraging to see Howard only walk one batter in his debut against Atlanta. Fifty-six of his 81 pitches went for strikes, which is another encouraging sign. Improving his overall command will take Howard a long way to being an elite starting pitcher.

Spencer Howard brings an elite pitch mix to the table, but what does he bring to your Fantasy Baseball team. While his start against Atlanta was less than stellar, his overall stuff was good, and that should excite Fantasy owners. First, Howard is a must-own player in all formats. He is currently only 76 percent owned on Fantrax, which is low, considering the number of dynasty leagues on Fantrax. In Yahoo leagues, Howard is only 43 percent owned, while the ESPN ownership is at 42 percent. If he is available in your leagues, grab him now. Based on upside alone, Howard could perform similarly to Nate Pearson rest of season.

Struggles are expected with any young pitcher, though. Howard just turned 24 years old and never pitched in Triple-A before his start on Sunday. You could tell there were some nerves early in his start, but who wouldn’t have nerves pitching in their Major League debut. Howard settled in nicely despite the two home runs, on what I would call two very well placed pitches.

In 2019, Howard only gave up four home runs all season and had kept the ball in the park well for his career with a 0.65 HR/9. He also has produced a career ground ball rate of 41.6 percent in the Minor Leagues. Pair those numbers with a 32.8 percent career strikeout rate, and you have an excellent recipe for success.

For 2020, I expect Howard to pitch to a low fours ERA with more than a strikeout-per-inning. He needs to continue to build up his arm strength, but Howard should be able to pitch six innings after several starts. It would not surprise me to see Howard have a mid three’s ERA with a 30 percent strikeout rate, though, as he dominated hitters in the minors. Howard’s next scheduled start is Friday against the Mets, which should be a good matchup.

While Howard’s value may not skyrocket in 2020, he does provide excellent value long-term in dynasty leagues. My peak MLB projection on Howard is a 3.40 ERA with a 1.09 WHIP and 220 strikeouts. If he can hit those projections, Howard is a back end SP1. If he continues to improve his command, we could be looking at a Walker Buehler caliber pitcher(I know, it is a lofty comparison).

Usually, when a prospect debuts, they are at peak value, and it could be a great time to sell. But after Howard’s start on Sunday, the owner in your dynasty league may be concerned if they just looked at his stat line. It is worth checking in to see if you can acquire him at a discounted price. Currently, I have Howard valued around 150 in my dynasty rankings.

So to answer the question, yes, Spencer Howard has the capabilities and the arsenal to be a frontline starting pitcher. He still has some work to do to reach that status, but right now, it is easy to see him as a high-end SP2 with back-end SP1 potential. Howard is the starting pitcher the Phillies have waited for to compliment Aaron Nola, and he has the upside to be as good if not better than Nola. Watch out baseball world, Spencer Howard; future SP1 is here!

All data was drawn from Fangraphs and Baseball Savant’s Game Feed.

Struggling with whether you should cut a player from your Fantasy team? Eric Cross wrote a great piece on “Pitchers to Cut in Redraft Leagues.”