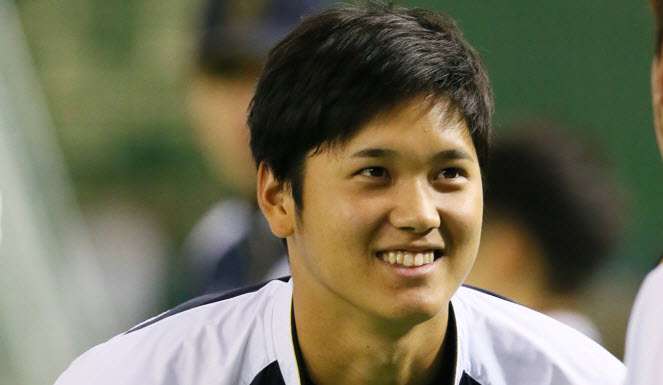 Is there anything better in fantasy baseball than the element of the unknown? When a player dominates in a foreign country, like Cuba or Japan, and wants to come to MLB, it creates a ton of intrigue on how good can that player can be in the majors. Some have come over and had very successful careers, like Ichiro, Jose Abreu, Yu Darvish, Hiroki Kuroda, etc. Others, such as Hideki Irabu and Daisuke Matsuzaka, haven’t fared as well and had shorter, unproductive careers. This year, Shohei Ohtani, the most hyped prospect, perhaps ever, to come out of Asia should be signing relatively soon.

This whole process has been wacky, to say the least. With teams getting eliminated from Ohtani’s list one by one, this is starting to feel like baseball’s version of The Bachelor. Get your popcorn ready, because the Shohei Ohtani show is coming to a ballpark near you in 2018. So how much of an impact does “The Babe Ruth of Japan” have in the fantasy baseball world? Let’s take a look.

Ohtani as a Hitter

You hear the term “two-way player” a lot with young players getting drafted nowadays. We all know it’s just a mirage and eventually, they’re going to settle in as a pitcher or position player. It’s always just a smoke show. However, that’s not the case with Ohtani. I mean, they don’t call him “The Babe Ruth of Japan” because he a hulking fellow named George Herman.

He might not be quite as large as the Babe, but Ohtani is an imposing force at 6-foot-4 and 215 pounds and a lefty swinger to boot. He uses that frame to his advantage and generates easy plus power from the left side. Moon shots and tape measure blasts are a common occurrence when Ohtani steps into the batter’s box. He’s even hit a ball through the roof of the Tokyo Dome. That’s right, the roof.

If Ohtani were to play a full season as a hitter, 30-40 home runs would be a possible outcome. His raw power is truly elite and will be a sight to see. There is some swing and miss to Ohtani’s game, so those .300+ batting average seasons he’s had in Japan the last two years likely won’t translate over to the United States. However, he makes enough contact to be a .270-.280 hitter in the majors.

When looking at Ohtani’s stats in the JPPL, you can break them down into two 500+ at-bat segments. The first segment is 2013-2015 in his age 18-20 seasons. No matter what professional league you’re in, it’s hard to taste greatness in your teens. Even Mike Trout and Bryce Harper had their struggles in their teen years. You can see that this was indeed the case for Ohtani as well. However, over the last two seasons, it’s been a much different story. Ohtani’s OPS is over 250 points higher than his age 18-20 seasons, and his in-game power has shown itself with much more regularity.

I know I’m pointing out the obvious here, but Ohtani’s overall value as a hitter will hinge on how much he is allowed to hit between starts, as well as if he lands in the AL or NL. It’s likely he doesn’t get 500+ at-bats in 2018, but even 250-300 at-bats could yield 10-15 home runs and close to double-digit stolen bases. Oh yeah, did I mention that Ohtani is pretty speedy on the basepaths, too?

Ohtani as a Pitcher

As good as Ohtani is as a hitter, the pitching mound is where he will make the biggest impact. In 543 innings, spanning 85 appearances (82 starts), Ohtani recorded a 2.52 ERA, 1.08 WHIP, and 10.3 K/9. Those are impressive numbers already, but when you factor in that these were his age 18-22 seasons, they look even better.

Ohtani’s 2017 season on the mound was limited due to injury, but just look at those numbers in 2015 and 2016. During those two years, he threw 300.2 innings with a 2.07 ERA, 0.93 WHIP, and 11.1 K/9. Okay, stop your drooling. Damn, where are the tissues when you need them? It’s always difficult to predict how stats in foreign leagues will translate to the majors, but you can’t help but be excited after seeing those numbers.

On the hill, Ohtani has a nasty three-pitch assortment he can throw to any batter in any count. First, he has a blazing triple-digit heater with late movement and can carry that velocity deep into starts. He pairs that with two equally nasty off-speed pitches that are both regarded as plus-plus offerings.

His hard, diving splitter brings back memories of Roger Clemens and Curt Schilling in their primes. Honestly, Ohtani could throw just those two pitches and be a No. 2 starter in this league. But in the wise words of the late Billy Mays, “But wait, there’s more!”

In addition to his scorching fastball and nasty splitter, Ohtani also has a devastating slider that he throws in the high-80s and can even get into the low 90s. Not only does he throw his slider with high velocity, it also has late, sharp movement that is nearly impossible to make good contact on when he’s throwing it well.  C’mon, Shohei, that’s just not fair. Three plus-plus offerings and you can reach triple-digits? What a show-off, right?

OK, all those stats I rattled off above were against hitters in the Japan Pacific League and not against major leaguers. I get it. Not convinced yet? Well, here is Ohtani dominating some names you might have heard of before.

Convinced yet? Don’t even think about shaking your head no, either.

Where Does He Play?

OK, so I’ve broken down how insanely talented Ohtani is, but where will he play? That’s the biggest question on everyone’s mind. Actually, it’s more like two questions. Where will he play on the field, and what team will he be suiting up for on Opening Day?

Recent reports have Ohtani’s list of potential suitors down to seven teams, most of which are on the west coast. The San Diego Padres and Seattle Mariners appear to be the current front-runners for his services, with the Los Angeles Dodgers, Los Angeles Angels, San Francisco Giants, Chicago Cubs, and Texas Rangers all still in the mix as well. It’s sounding like Ohtani should be making a decision within the next week.

I’m sure a big part of negotiations with each of those seven teams is discussing Ohtani being a two-way player. That’s what he wants, but might not be what he gets to do. At least not on a full-time basis. One thing is for certain, though: He will be a full-time starting pitcher. How much time he gets as a hitter is another question.

We know he’s a great hitter, and I broke down why above. However, any team that signs him isn’t going to want to risk him missing time on the mound. Sure, he’s probably going to lead all major league pitchers in at-bats in 2018, but it’s highly doubtful that he’s DHing or playing the outfield all four games between starts.

The likely outcome is that Ohtani pitches (and hits if he signs with an NL team) every fifth day and makes a start or two in between at DH or in the outfield with some extra pinch-hitting duties as well. When the 2018 season concludes, I’d expect him to be in the vicinity of 200 at-bats if he signs with an AL team and closer to 300 if he signs with an NL club. That might not be as much as fantasy owners want, but it’s a heck of a lot more than any current major league pitchers gets in a season.

With all that being said, it likely won’t matter how much he hits since most fantasy leagues don’t allow pitchers to accrue hitting statistics. Here at Fantrax, you’ll be able to designate whether you want Ohtani as a pitcher or hitter before each scoring period begins. That adds some flexibility, but it’s still one or the other. You’re not going to be able to get all the stats that come with 30+ starts and 250+ at-bats. Regardless, even if you’re just getting pitching stats from Ohtani, you’re likely going to be pleased with the end results.

So, what is Ohtani’s value in 2018 and where should you draft him? Early ADP data has him being taken around pick 85 on average as the 21st starting pitcher off the board. The two names directly behind him are Alex Wood and Jake Arrieta. So right off the bat, 2018 expectations are very high. He’s being drafted as an SP2 and hasn’t yet thrown a single MLB pitch.

Yes, those are high expectations out of the gate, but Ohtani has the talent to live up to them and likely even exceed them. If this were just another solid late-20s Asian pitcher, then a top-100 draft slot wouldn’t make much sense. But this is a 23-year-old Japanese phenom that has long been considered the best player on the planet not playing in the major leagues.

His current ADP might be around 85, but as we get closer and closer to Opening Day, expect him to start going earlier and earlier in drafts as the hype train gains momentum. It wouldn’t shock me one bit to see Ohtani’s name as a top-10 fantasy pitcher when the 2018 season concludes. Believe the hype. This is a special player.

I hope you can use this article to your advantage and get a leg up on your fellow league members.  Got a question about Ohtani that I didn’t cover here? Then follow me on Twitter @EricCross04 and ask there.