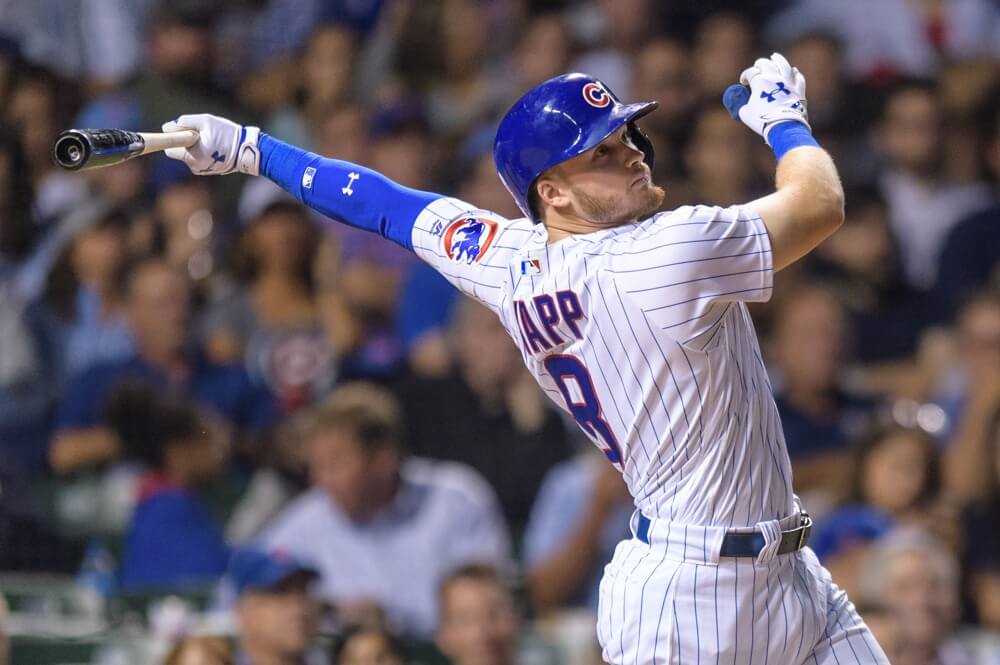 As we creep towards a new year, fantasy baseball leagues are starting to get going already. We are getting ADP data from actual leagues going on right now that we are able to analyze. With that said, I am diving into the early ADP trends and bringing you seven hitters to target late in drafts for power.

So just how deep is deep anyway? For this article, I targeted players being drafted outside the top 300 in ADP. This way the names are truly beneficial to deep-league players. If you play in shallower formats, these may be names worth monitoring on the waiver wire early in the year or in spring training to see if their stock may grow.

Talk about a post-hype sleeper. I guess people are just sick and tired of giving Ian Happ a shot. If you combine the triple-A stint and the stint in the majors last season, he hit 27 home runs in just 585 total plate appearances. If Happ is given the playing time he could or SHOULD hit 30 home runs. It also doesn’t hurt that there was a tangible change in the plate discipline. He was more aggressive and that led to less swinging strikes and career-best contact rates. The K-rate was at 25%. That was actually 11.1 percentage points better than 2018.

Some may not realize this, but Happ is currently penciled in as the starting center fielder for the Cubs. Not to mention, if Kris Bryant does end up getting dealt we could see him shift over to third. I doubt he gets moved around the diamond as much this year with Joe Madden no longer the Cubs manager. With consistent playing time and staying at one position, Happ can build up a level of comfort and confidence and produce as we once hoped he could. You should take advantage of this early price because he is easily the one of this bunch here that I expect to make a decent jump as we enter spring training.

With how hot the hot stove has been this off-season; the Evan White news feels like a blip on the radar. He is almost being forgotten in early drafts now. White is projected to break camp as the starting first baseman. He has a solid, all-around game. Unfortunately, the track record is limited but the upside is there.

Evan White hit 18 home runs in just 400 plate appearances in double-A last season. He did pull the ball a good amount which translated to a pull rate of 46.9 %. This will help sustain and generate the previously mentioned power. So we can tell there is 25 or so home run potential there. He brings the power and accompanies it with a solid batting average potential as well. White is a great late-round target and depending on how he performs in spring training, he could be a diamond in the rough in these early drafts or just fool’s gold.

Rowdy Tellez had a little hype last year at one point. Unfortunately, he did not follow through on that hype. With that said, he is going at a great value and this is the time to double down. The power is very real and with how power is at its peak, you need to try and keep up. I know I have found myself chasing power late in some of these early drafts and Tellez is the type of guy you can target to fill the need.

If you combine triple-A and his major league stats, Tellez hit 28 home runs in just a little over 500 plate appearances. The power is legit and he was unlucky in batting average. He was expected to hit .251 but only produced a .227 batting average. That alone shows there is room for improvement.

As far as the power goes, in 2019 he was above average in HH%, average exit velocity, and expected slugging percentage. That came with a barrel rate of 13.2% which is top 9% of the league. There is potential for 30-plus home runs and a .250 average. It is hard to find that type of upside this late.

The Yankees just signed Bret Garner, again, and have all their players returning healthy. That leaves no room for Frazier on the current roster. Why is he included on this list? Well, it is because he flashed the hit tool last season and with it was some power potential. I also believe they will look to package him in a deal to address a different need this off-season. This is pure speculation, but I am willing to take the chance on it with the ADP outside the top 400.

Last season he hit for 20 home runs between the majors and triple-A last season. He did so in only 515 plate appearances. Frazier has hit for double-digit home runs in multiple minor league seasons. Frazier is only 25 years old and he carries a ton of upside if given everyday at-bats. I think there is some prospect fatigue and at his price, you can capitalize on that. Take the discount now because if, or when, the trade occurs and he lands in a place as a full-time starter, he will soar off draft boards. This is a low risk/ high reward type of target. That is the best kind of target there is.

I am not sure this ADP will last but if it does, I would jump all over it. The Rays did not just go out and sign this player without the intent to play him every day. I anticipate just about everyday at-bats. If he is not given everyday at-bats, I would expect the strong side of a platoon at the very least.

Tsutsugo has averaged over 30 home runs over the last five seasons, with his career-best mark sitting at 44 home runs. The power should play even in the states. He is in a very solid lineup, a hitter-friendly division, and should be given every opportunity to start. As if the hype isn’t already building, check out this towering shot below!

In case you're wondering what kind of power #Rays new OF Yoshitomo Tsutsugo has pic.twitter.com/U3svLKQojo

Oh, how the mighty have fallen. Entering 2019 there were plenty of analysts questioning his legitimacy entering the season. At the same time, many ignored them and Aguilar was a pretty big bust. Now he is only being drafted in the deepest of formats. Although the park is not nearly as favorable, Aguilar should get the playing time and the long leash he was otherwise denied in Milwaukee. The power is very real and should not be questioned. Here is every home run since 2018 for Aguilar placed over Marlins Park. 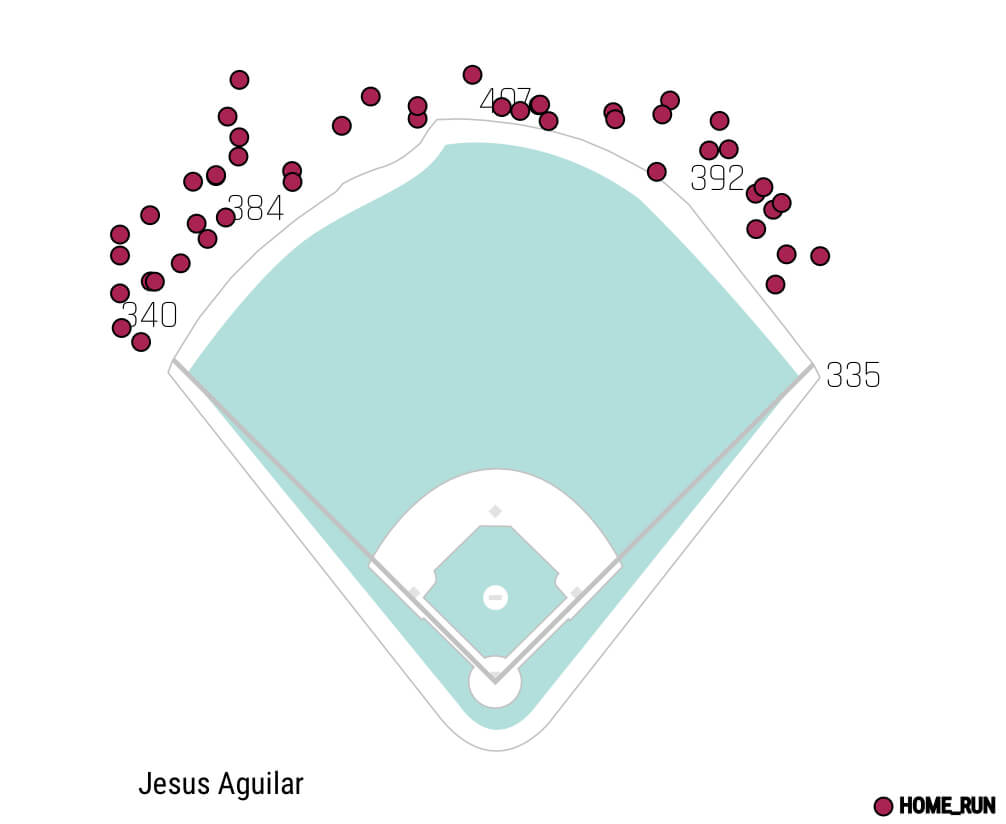 As you can see, none of his home runs were cheap shots at all. I do believe the idea is to build up some sort of trade value prior to selling him off at the trade deadline. Until the trade occurs, there is some solid power upside to be had here and I will gladly take a shot in the deepest of formats.

Now, this is truly a deep league name. It was just last season he was drafted as a pretty popular sleeper. As we enter the 2020 draft season, he is not even being looked at. To be honest, it’s deserved after the disappointing production in 2019. O’Hearn is simply a depth target for your 50 round draft and hold formats. He doesn’t offer much for batting average but the power potential is there. O’Hearn is currently projected to start at first base for the Royals. He had a hard-hit rate in the 78th percentile and exit velocity in the 76th percentile last season.

If the playing time and starting spot remain in his favor there is some value here as a bench bat for your teams. O’Hearn does lack the upside the previous 6 names offer but at this point in drafts, you’re looking for any player with a pulse. The good news is has a pulse and could fill in if you’re dealing with injuries or need a Hail Mary in the power department any given week.

Got more power sleepers for 2020 fantasy baseball? Drop them in the comments below. Don’t worry, we can keep a secret. No one in any of your leagues will ever know.