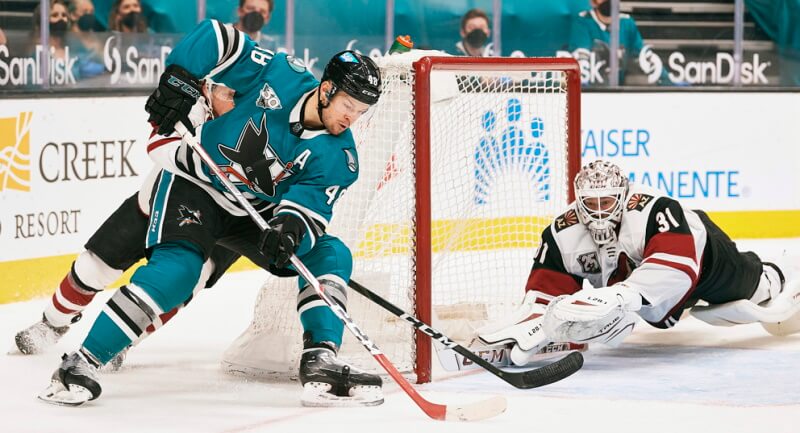 Fresh off taking a run at breaking down the expansion draft for the Pacific Division, we now turn our attention to the Central Division. Once again, we will also highlight a player who could see a bump in his fantasy value going into the 2021-22 season.

We have 25-year-old goalie Adin Hill packing his bags and making the move to Seattle. Hill will have a legitimate shot at the #1 goaltending spot on the Kraken. Despite not knowing how good Seattle will be in their inaugural season, Fantasy owners should keep Hill in mind as he has put up strong numbers in his limited NHL games to date.

There is good news and bad news for the Hawks in this expansion draft. The good news is that they should not lose anyone of real significance. The bad news is, there are not a lot of significant players to choose from. As there is no clear-cut candidate, my best guess is that Vinnie Hinostroza will be Seattle’s pick. The player for me, to watch for fantasy-wise, is Gaudette. He is a skilled Centre who skates well. With a regular role and increased ice time, he could have a breakthrough season in 2021-22.

The Avs seemed destined to lose a quality defenseman in this draft. Erik Johnson waiving his NMC and the trade of Ryan Graves to New Jersey cleared their log jam up. The Avs will have a tough decision as to who their 7th protected forward will be. I’m leaning toward J.T. Compher being left unprotected and being picked by the Kraken. He will also be a guy to circle for fantasy owners as an elevated offensive role should see him put up career-best point totals.

The Stars list of protected players seems pretty straight forward but then you see Ben Bishop waiving his NMC at this 11th hour and if you are like me you did a double-take. I don’t see how Seattle doesn’t take Bishop with their Dallas selection. Bishop missed all of last season because of knee surgery but as he is arguably one of the top 10 goalies in the league when healthy, he is worth the gamble for Seattle. Fantasy owners should jump on either Bishop or his heir apparent in Dallas, Jake Oettinger in their 2021 fantasy league drafts.

The Wild uncomplicated their protection list by buying out Ryan Suter and Zach Parise leading into this draft. Minnesota seemed to be heading toward losing Dumba but with the protection list firming up with those buyouts, Seattle will likely shift their attention to Cam Talbot in goal. This will free up Kähkönen to take over the #1 goalie spot and establish himself as a player to target for fantasy leagues.

Nashville may be the most interesting team to keep an eye on at this draft. There are a number of combinations they may choose to go with and I also see them at the front of the line trying to entice Kraken GM Ron Francis to take one of their bigger underperforming contracts like Matt Duchene or Ryan Johansen off their hands. I have the Preds protecting 5 D which would likely make them totally unique from all other teams. As there will be a lack of scoring and quality centers in this draft I’m going with Johansen as the Kraken selection. A change of scenery may be what he needs to return to the 30 goal scoring form he hit earlier in his career. Johansen would be worth using a late draft pick on in your fantasy league draft.

There may be some debate on the 7th forward the Blues protect but either way, they are more than likely going to lose a defenseman. All signs point to Vince Dunn as being the most likely player moving to Seattle. I think Francis will jump at the chance of adding Dunn to his defensive core. I have him circled as a player to watch for 2021-22. Fantasy owners should do the same.

There are rumors floating around that the Jets may protect Adam Stanley instead of DeMelo. Seattle’s pick may come down to either one of these players depending on who is exposed. The player I think who may have a chance to be picked is Sami Niku. Niku has put up some excellent offensive numbers in the AHL and he may either get his opportunity if Seattle takes him or he may get a good look with the Jets as they look to fill holes on their blueline.

That does it for the Central Division. This weekend we will be moving on to the Eastern Conference and hitting up the Metro Division.