Searching For The Next Cedric Mullins 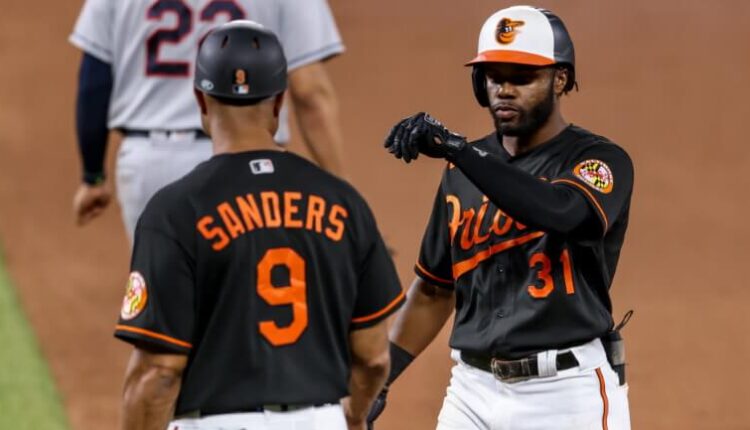 Cedric Mullins finished last draft season with an ADP of 390.59 in all drafts conducted by NFBC. He proceeded to finish 18th overall on the Razzball player rater. Once again, I want to clarify that I do not expect anyone to make this dramatic jump in 2021. But, for the criteria for this article, we will be looking at hitters going after pick 375 for current NFBC Draft Champions ADP. The goal will be for this player to return top-100 value next season, making them an excellent return on investment. Finding the next Cedric Mullins will not be easy, but let’s give it a shot!

Who Could Pull A Cedric Mullins in 2022?

When you read the name Harold Ramirez, you might be confused about how he could be a breakout candidate in 2022. For one, he is not even listed as a starter on Roster Resource. Secondly, Ramirez was acquired by the Cubs for cash considerations from the Cleveland Guardians. Neither of those scream breakout candidate by any means.

Harold Ramirez played 99 games in 2021 for Cleveland. He posted a .268/.305/.398 slash line with seven home runs and three stolen bases. Looking at the basic stat line, nothing much stands out about Harold Ramirez.

Ramirez does not walk at all; a career four percent rate. He also does not strike out often(15.5 percent last season). Surprisingly, Ramirez does not post high strikeout rates given his career 43.6 percent O-Swing%. Ramirez also hits the ball on the ground too often(53.1% last season).

You are probably asking yourself, “Chris, what in the world is good about Harold Ramirez?” Well, I’m glad you asked. Let’s get to the good stuff.

Why Harold Ramirez Could Be The Next Cedric Mullins

The good news is that Ramirez makes a ton of contact and plenty of loud contact at that. Last season, Ramirez posted a 78.4 percent contact rate and an 88.1 percent zone-contact rate. The contact is there, but what about his quality of contact?

As you can see in the chart above, Ramirez hits the ball hard at all launch angles. One of the biggest problems is hitting the ball hard into the ground.

Below, you can find Harold Ramirez’s exit velocity rankings by percentile. As you can see, Ramirez hits the ball EXTREMELY Hard.

Here you can see how Ramirez stacks up from a quality-of-contact standpoint versus Cedric Mullins, Jarred Kelenic, and slugger Eloy Jimenez.

If Ramirez continues to pound the ball into the ground, the hard contact is a moot point. But, there is a possibility the Cubs could work with Ramirez to fix his swing to lift the ball more. An excellent article on The Athletic by Sahadev Sharma notes that the Cubs have a program to help hitters lift the ball more. The report is about Nelson Velazquez’s swing change and how it changed his game. Can the same be done for Ramirez? I believe so.

It is also worth pointing out that Ramirez has elite sprint speed. Last year his sprint speed ranked in the 88th percentile among all hitters. Stealing bases has minimal to do with sprint speed, and more the players will to steal. If Ramirez gets the green light, he could produce in that department.

No projection system is projecting him for full-time at-bats. ATC currently has him for 240 plate appearances, while Steamer has him at 208. The Cubs outfield is a mess with Rafael Ortega, Ian Happ, Clint Frazier, Jason Heyward, and Harold Ramirez, all projected to be on the active roster. Heyward is a possible cut; Ortega could be a one-hit-wonder. Frazier is as big of a question mark as Ramirez.

If, and that is a big if, Ramirez gets the playing time and tweaks his swing slightly, he could be in for a big season!

I am not quite sure why Guardians fans dislike Bradley Zimmer so much. This Tweet sparked a ton of hate from their fans, and they laughed about how bad he is.

This pick is the ultimate upside pick. Zimmer could take off and certainly has the pop and speed to post a 30/30 season. The biggest concern is the contact issues. If Zimmer continues to strike out at a high clip and fail to make contact, he will find his way out of the lineup. But, at pick 460 off the board in NFBC draft champion leagues, you can take a chance on the upside.

Let’s get the bad out of the way on Zimmer first. His contact rates are awful. Zimmer’s overall contact rate was 66.1 percent last year, and he has a career 68 percent contact in the majors. His zone-contact is at least somewhat respectable at a career 80 percent. As you might expect, Zimmer’s strikeout rates are also alarming. He posted a 35 percent strikeout rate last season and has a 33 percent k rate for his career.

Like Harold Ramirez, Zimmer also hits the ball on the ground a lot, but not quite at the rate Ramirez does. Last year, Zimmer posted a 48 percent ground ball rate, which is right in line with his career average.

As you can see in the chart above, most of Zimmer’s batted balls came between zero and 15-degree launch angles. It is not the worst thing, especially if the numbers are close to 15 degrees(ideal launch angle). Zimmer’s hardest-hit balls came between the ten and 20-degree launch angle, which is perfect. He averaged 97.1 mph on those 24 batted balls. His second-best exit velocity range was from zero to ten degrees. Unfortunately, most of those balls were groundballs.

Why Bradley Zimmer Could Be the Next Cedric Mullins

As you can tell in the chart above, Zimmer can hit the ball very hard. But just how hard can Zimmer hit it? His average exit velocity ranks 62nd among all hitters, but as you get to the higher-end outcomes, you see the tremendous impact that Bradley Zimmer makes on baseballs. His 85th, 90th, and 95th percentile outcomes are some of the best in the game. Those percentiles are much stickier than max exit velocity for what it’s worth. Seeing Zimmer pop up at 13th overall in the 90th percentile of exit velocity stands out. He ranks ahead of Juan Soto, Yordan Alvarez, and Bryce Harper. Zimmer has the power to hit 30 home runs.

While Zimmer played most of his games out of the bottom of the lineup, he began to see more time toward the top of the lineup in August and September. Zimmer saw 15 games in the five-hole before getting twenty games in the leadoff or second spot in the lineup.

Zimmer may not be at the top of the lineup in 2022, but it is encouraging to see the team begin to trust him in that role down the stretch last season.

From a stolen base perspective, You can expect Zimmer to run when on base. His sprint speed is elite, and last year, Zimmer was successful on 15 of 18 stolen base attempts. Zimmer has an 86.7 percent success rate on the base paths for his career.

It would be foolish to expect Zimmer to make a considerable leap in batting average, though crazier things have happened. Even if Zimmer can make slightly more contact and raise his batting average to .240-to-.250, the power and speed can play up.

Bradley Zimmer is a player we may dream about the tools forever, but he has shown the ability to be a power/speed threat.

It is doubtful to find a player that will make a Cedric Mullins-like leap in 2022. Mullins’ 2021 season was extraordinary and will be hard to repeat. Again, both Harold Ramirez and Bradley Zimmer are long shots to make a leap, but they are players to target that have the upside at the current price.