Fantasy Baseball 2021: Rowdy With A Chance Of Thunder 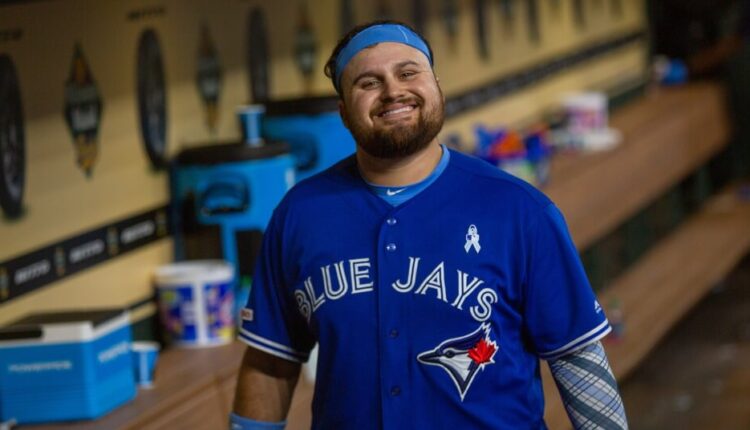 The 2020 season has come and gone, and now we set our sights on 2021. So, it’s hype season! And there are few teams with as much excitement surrounding it as the Toronto Blue Jays. While Bo Bichette, Vladimir Guerrero Jr., Cavan Biggio, and Lourdes Gurriel Jr. are the big names representing the core of stellar young talent, don’t overlook one of last season’s most improved hitters and a favorite sleeper of mine, Rowdy Tellez. Let’s take a look at what changed for Tellez in 2020 and what we could expect from the first baseman in 2021.

Tellez was drafted out of Elk Grove High School in the 30th round of the 2013 draft by the Blue Jays. He came up through the system as a power-hitting first baseman with a below-average hit tool. While strikeouts weren’t an issue in the minor leagues, having consistently posted strikeout rates under 20%, he was exposed in his first season in the majors. Tellez produced a 28.4% strikeout rate and a .227/.293/.449 slash line over 409 plate appearances in 2019. Not all was bad, though. He managed to hit 21 home runs, a 30 home run pace over 600 plate appearances. Supported by a 13.2% barrel rate, the power was not in question. But after hitting just .208 against right-handed pitching, was Tellez destined to be a weak-side platoon bat? Not if it was up to him.

Apparently, it was up to him. From The Athletic, “I’m too big of a player, too strong of a person to try and hit that ball a country mile every time. Just trying to be a good hitter first.” Big indeed, standing at 6’4″, 255lbs, and knowing he had plenty of raw power, Tellez made a conscious decision to hit for more contact, and it worked. He put up a .283/.346/.540 triple-slash with eight home runs in only 127 plate appearances. The batting average came with only a .276 BABIP and .286 xBA, meaning that line was legit.

The chart above shows some of the improvements Tellez made to his contact and plate discipline profile. Swinging at fewer pitches outside the strike zone helped raise his walk rate from 7.1% to 8.7%. Meanwhile, not only was Tellez more aggressive with pitches in the zone, he made a lot more contact on those pitches. From a below-average 81.1% Z-Contact rate to an excellent 89.3%. The combination of adjustments dropped his strikeout rate down to 15.7%. The 12.6% drop in strikeout rate was the biggest in baseball among hitters with 400 plate appearances in 2019 and at least 100 in 2020. These improvements held across all pitch types as well, with his whiff% dropping on fastballs, breaking balls, and offspeed pitches.

Putting it all together

While making improvements to his contact profile, Tellez did not need to sacrifice any power. His eight home runs in 127 plate appearances put Tellez on pace for 31 home runs over 500 plate appearances. In fact, he improved on some underlying power statistics. His 95.9mph average exit velocity on line drives and fly balls was up from 94.5mph in 2019. And if max exit velocity is an indicator of power potential, Tellez has plenty. His hardest-hit batted ball event left the bat at 115.2mph in 2019, good for 22nd best in baseball. In 2020, he hit a rocket of a home run at 117.4mph. Only Giancarlo Stanton, Pete Alonso, and Gary Sanchez had a higher max exit velocity. That home run came against the Phillies on August 20th. Wanna see it?

The improvements across the board put Tellez among the best in the league when it comes to his Statcast metrics. Take a look at the differences between his 2019 and 2020 percentile rankings. 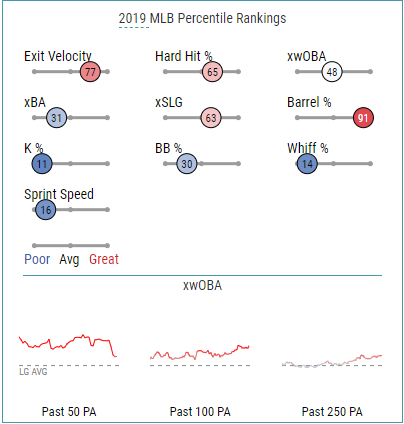 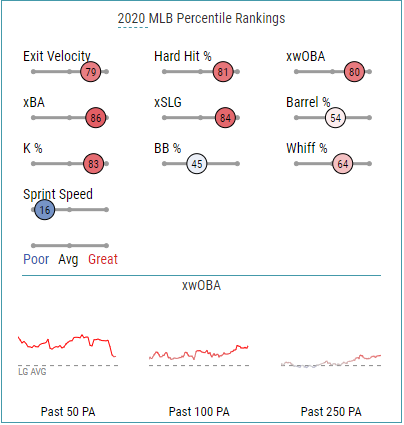 It is fair to point out that Tellez’s barrel% dropped from 13.2% to 8.4% despite the previously mentioned improvements, in addition to his hard-hit percentage jumping from 41.6% to 45.3%. This could be in part due to his lowered launch angle. His average launch angle was down from 14 degrees to 10.6 degrees, also resulting in a 7.8% rise in his ground ball rate. But you know what, I’ll take that trade-off. And if Tellez can carry over these adjustments, and raise his launch angle, watch out!

As of now, there’s no one standing in the way of everyday at-bats for Rowdy Tellez. Vladimir Guerrero Jr. is planning on playing more third base, and there’s no clear competition for DH at-bats. So, 500 plate appearances could be a conservative estimate over a full season in 2021. Steamer currently has Tellez projected for 539 plate appearances, a .259/.330/.480 slash line, 26 home runs, and 150 combined runs and RBI. Giving more weight to the improvements he made in 2020, I’d say he could beat those projections and hit .270 with 30 home runs.

Tellez has a Fantax ADP of 298.39 as the 20th first baseman off the board and an NFBC ADP of 276.04 as the 29th first baseman. If we just take Steamer’s projections, Tellez is projected to be a top-15 first baseman in home runs, SLG, OPS, and wRC+. He’s looking like a good value right now. Don’t be late on the Tellez train because that ADP might not last long.

The hot stove is just starting to heat up, but FantraxHQ has been cooking for a while now. Keep track of all our 2020-21 MLB Offseason Analysis.