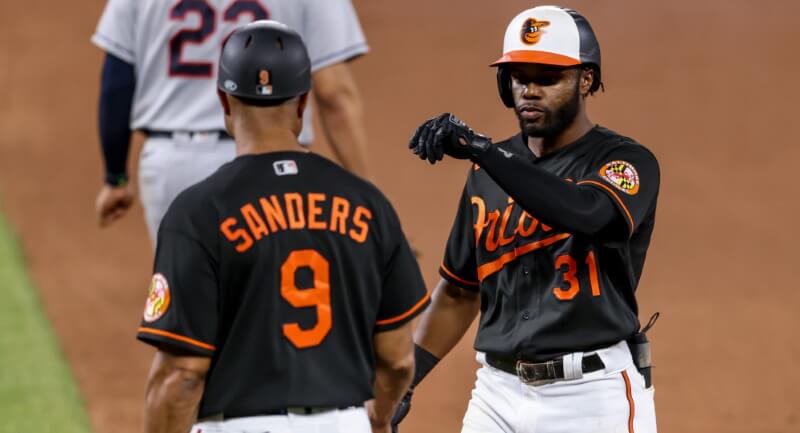 With roughly 40 percent of the season in the books, there are a dozen or so players who are on pace for a 20-20 season. You may have heard of some of them. Names like Acuna, Tatis, and Ohtani head this group. Speaking of Ohtani, what is the statute of limitations on victory laps? Because I published an article right before the pandemic shut everything down last year suggesting that Ohtani could go 20-20 if things broke right and people thought I was insane for including him on such a list. To be fair, I might be insane. And I also included Danny Santana and Scott Kingery on that list. But I still think I should get some props for the Ohtani call. OK, back to business. Not every player on the list of current candidates is a household name. Perhaps the most obscure name on this list is the player who has made the biggest leap in this week’s edition of my rest of season rankings. Meet Cedric Mullins of the Baltimore Orioles.

Mullins was a part-time player for the Orioles in 2018 and 2019 before playing in 48 games last year. He flashed some speed last season with seven steals but otherwise did not move the needle much. Coming into this season, he was a career .225 hitter in just over 400 plate appearances. He did have seven home runs and 10 stolen bases, but that was not enough to offset the poor batting average. Mullins struggled mightily against left-handed pitching. In 111 career appearances against southpaws, Mullins had a higher strikeout rate (30.6) than wRC+ (26). Small sample size aside, a wRC+ that low is unfathomably bad. For reference, 141 hitters are currently considered qualified according to Fangraphs based on their number of plate appearances. The lowest wRC+ is 39 by Kevin Newman, and only two other players have a wRC+ below 50. Mullins needed to adapt and fast.

On February 28, Orioles writer Dan Connolly tweeted out that Mullins was going to cease switch-hitting for the time being. Instead, he would focus solely on hitting from the left side of the plate. The move did not seem to garner a whole lot of attention at the time. Manager Brandon Hyde alternated between Mullins and Austin Hays for the first couple weeks of Spring Training. As March wore on, both players saw more action. Hyde began to utilize Mullins in the leadoff spot. But even that could not quell the skepticism of the average fantasy manager. Mullins’ ADP in February was 535.65 per NFBC data. It rose slightly in March but was still just 516.16. Most people (myself included) simply did not believe Mullins would reach base at a high enough rate to warrant full-time at-bats, much less be able to stick at leadoff.

But Mullins has certainly silenced his critics so far this season. He is currently fourth in the American League with a .318 batting average and leads the Junior Circuit in hits. Mullins is also one of just seven players in all of baseball to have at least nine home runs and nine stolen bases. The power has been a bit of a surprise. After combining to hit 13 doubles and seven home runs in 418 career plate appearances before 2021, Mullins has already exceeded both of those totals (17 doubles, nine homers) in just 268 plate appearances this year. He even has a .299 batting average and 130 wRC+ against left-handed pitching this season. It appears that sticking to one side of the plate has worked wonders for the 26-year-old.

With batting averages throughout baseball at an all-time low, players who can approach or even exceed .300 have plenty of fantasy value. Those who can do so while flashing power and speed are worth their weight in gold. Of the seven players with at least nine home runs and nine stolen bases, only Mullins and Trea Turner are hitting above the coveted .300 mark. I moved Mullins way up my rest of season rankings this week, and I am not even convinced I moved him high enough. He is currently a fourth-round fantasy value according to Baseball Monster. I suspect he will come back to earth somewhat, but I see no reason why he cannot be a top-50 outfielder and every week fantasy starter. (Note: Before anyone complains that he is not included in my outfield rankings, FantasyPros only has Mullins designated as a centerfielder. If you want to see how I value Mullins going forward, you can find him in the overall section, as well as the hitter and center fielder sections.)

On Friday night, Anthony Desclafani became the first pitcher to hurl two nine-inning shutouts this season. He enters the middle of June with six wins, a 3.09 ERA, and 1.02 WHIP. As good as his year-to-date numbers are, they would be much better were it not for a disastrous outing against the Dodgers three weeks ago. In that game, Desclafani allowed 10 earned runs in just 2.2 innings. There are no do-overs in baseball, be it in the Major Leagues or fantasy. But, just for argument’s sake, if we were to erase that night from Desclafani’s ledger, he would have a 1.97 ERA and 0.89 WHIP. Perhaps we would be looking at him in a different light (like, say, a disco ball perhaps? Sorry, I had to.) if that were the case.

Desclafani has allowed less than one home run per nine innings pitched this year. That had long been a bugaboo of his during his tenure as a member of the Cincinnati Reds. The longball was a real issue in recent years. Over the past three seasons, Desclafani had been taken deep an average of 1.7 times per nine innings. He is getting much better mileage on his sinker this year. The pitch has a -6 run value based on Baseball Savant’s metric and opponents are hitting just .159 off the sinker. Their xBA (expected batting average) is not much higher at .198. That improved sinker has allowed him to generate a career-high 1.35 ground ball to fly ball ratio so far this year. If he can continue to keep the ball in the park, Desclafani should remain a solid back-end starter in most fantasy formats.

Admit it – we all realized this season was going to be different when Wade Miley threw a no-hitter. We thought we had found a sense of normalcy when the veteran allowed 11 hits and eight earned runs in his next start following the no-no. But just as we were back to writing Miley off, he has since bounced back with four solid starts. Since the blowup, Miley has allowed just four earned runs in 22.2 innings. He now sports a tidy 2.92 ERA and 1.12 WHIP on the season. Back to that mid-May meltdown where Miley got torched in three innings of work. The game was in Colorado. Rumor has it that Miley is not the first pitcher to have a rough day at the office in Coors Field. If you remove that outing, Miley would also have an ERA under 2.00. It’s true. I ran the numbers twice.

In today’s age of fastball velocity and spin rate, Miley’s approach is not sexy by any means. His average heater sits just below 90 miles an hour. But he has become quite adept at avoiding hard contact and barrels. Miley was in the top five percent in barrels allowed in 2018 and 2019 and would have placed there last season as well had he qualified based on batted ball events allowed. This season, he sits third among all pitchers in hard-hit rate allowed and 15th in barrels per plate appearance allowed. His cutter is one of the most effective pitches based on run value. I do not expect Miley to post an ERA south of 2.00 moving forward, and even sub-3.00 would be a stretch. But fantasy managers should feel confident deploying Miley in good matchups as a streaming option with some surprising upside.