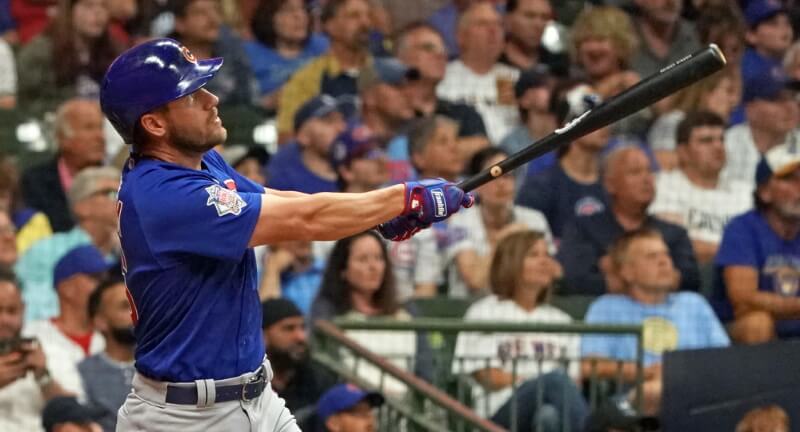 It is time to make that final push to secure a playoff berth and win your fantasy baseball league. And as I post the penultimate edition of my rest of season rankings column, I have a confession to make. At this point in the season, it may not help to just grab the best player available in a Roto league. You need to make sure that player will help you improve in a particular area. It is all about maximizing categorical value.

This is the part where I give an example from the leagues I am in. I understand that nobody cares about my leagues, but I think the visual might help. Below are two screenshots. The one on the left is from my NERF (New England Roto Fantasy) league. The one on the right is from my TGFBI (The Great Fantasy Baseball Invitational). Both reflect totals in stolen bases. Full disclosure – I have zero chance of winning NERF this year. But I am still trying to finish as respectably as possible. Besides, you don’t quit trying in fantasy. It’s disrespectful to everyone else who is fighting for first place. 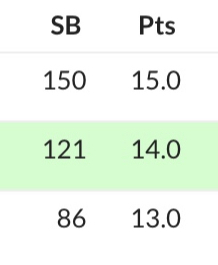 I picked up Bradley Zimmer a couple of weeks ago in NERF with the specific intent of moving up in stolen bases after Raimel Tapia went down with an injury. Zimmer has not been a “plus” fantasy player until recently, and this is probably the first time I have included him in my rest of season rankings. Even his recent stretch of productivity is directly tied to stolen bases. Zimmer has five stolen bases over the past month, which is tied for eighth-best in baseball. Still, he sits outside the top-100 in Roto value over that span, per Baseball Monster. Zimmer is currently available in my TGFBI league, but I will probably not be putting a claim on him. There is almost no incentive for me to do so. I cannot move up in stolen bases, and the team behind me cannot catch me. There is a caveat to this.

The team directly behind me in the TGFBI standings is part of a logjam in stolen bases. He is currently fourth in the category with 85 steals. Five other teams have between 75 and 85. If his team was on the lower end of that spectrum (meaning he would be able to jump several points in the standings) by grabbing Zimmer, I would likely put in a claim to try to block him. However, the best he can currently hope for is to move up one point in stolen bases. It is probably not worth it to me to spend what little FAAB (Free Agent Acquisition Budget) I have remaining to grab the Cleveland outfielder. Because of that, I will probably not put a claim in for him. On the other hand, let’s take a quick look at the saves category.

I lead the league in saves by a decent margin, so I need more saves like I need a hole in the head. In a worst-case scenario, I can lose one point in saves at the most. To be perfectly frank, I don’t see that happening. However, I circled the team that sits directly behind me in the league standings. He can gain several points in the standings if he can grab an extra closer or two for the stretch run. That is probably his quickest path to catching me, so it may be in my best interest to prevent that from happening. If there is a closer available on the wire, it may behoove me to attempt a claim so that the other manager doesn’t grab him. This is also why I cannot drop any of my closers even though I have an obvious surplus.

Two weeks ago, I dropped Adolis Garcia in TGFBI. That probably sounds crazy, and it might be. He is a top-50 hitter on the season and is tied for 15th in the Majors in home runs. However, he has been atrocious over the past couple of months. At the time I dropped him, he was mired in a 28-for-150 (.187) slump with six home runs in that stretch. Garcia was killing me in batting average, and it looked like the league had caught up to him. I was leading the league in the power categories, while I was below average in hitting. At that point, I decided it was worth the risk to let someone else have Garcia. I also figured they would unload some FAAB to do so, banking on his overall regular-season numbers rather than digging deeper into his recent history.

On one hand, I am happy with how it played out. The 11th place team (respect to this manager for respecting the league enough to continue to compete) spent over $100 to get Garcia, and he cannot catch up to me in any offensive category. Garcia has one RBI and 20 strikeouts in 43 at-bats since I dropped him, so from that standpoint it has worked. But before I go patting myself on the back for this stroke of evil genius, I have another confession to make. When I dropped Garcia, I picked up Lewis Brinson in his stead. Brinson is 2-for-34 since I picked him up, and yes those are his actual numbers. So much for trying to bolster my batting average. He is also now dealing with a thumb injury. So beware that trying to unleash a poison pill upon your league is a dangerous game.

And Now, Some Words ON Wisdom

Before this season, Patrick Wisdom had cups of coffee in the big leagues with three different teams. He had 50 at-bats as a Cardinal in 2018, 26 with Texas in 2019, and two with the Cubs last year. In those 78 career at-bats, Wisdom hit .217 with 34 strikeouts. So, when the Cubs purchased his contract from Triple-A in May, it was hardly a blip on the fantasy radar. Wisdom was a 29-year-old (he turned 30 on Friday) who looked every bit the part of a Quad-A player – someone who enjoyed success in the Minors, but for whom that success would never translate at the Major League level. However, Wisdom has been one of the hottest hitters in baseball since being called up and is on an incredible roll of late. Wisdom has back-to-back multi-homer games and has gone deep seven times in his last eight contests.

Since his first start on May 27, Wisdom is third in all baseball in home runs. He has posted fourth-round value since that date and has now climbed into the top-200 in overall Roto value on the year despite playing in just 82 games. He is eligible at three different positions and is somehow still available in 45 percent of Fantrax leagues. If you need a power bat to help you down the stretch, Wisdom should be your top target this weekend. However, please be aware that Wisdom’s batted ball profile (and his career in many ways) is eerily similar to that of Adolis Garcia. The pair is tied for the Major League lead with 107 strikeouts since Wisdom’s first start. As you can see, these types of hitters are prone to considerable hot and cold streaks.

While Wisdom has been a top-40 player, Garcia has barely been a top-300 player over the same timeframe. Garcia’s hot stretch to start the year is but a distant memory these days. My intuition tells me that Wisdom will eventually suffer a similar fate. His 39.3 percent strikeout rate is the worst in all of baseball. He has an expected batting average (xBA) of .228, which is significantly lower than his current .259 batting average. The league will likely catch onto Wisdom at some point as they seem to have with Garcia. Wisdom is not a player I would target in dynasty leagues, and I have a hunch his redraft price next year will be way too high for my liking. But as long as he is rolling, and as long as he is rocking that sweet mustache, fantasy managers should continue to ride the wave.