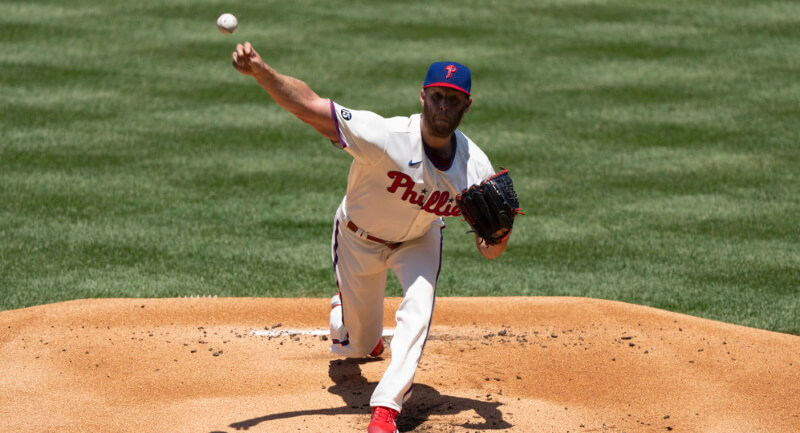 Welcome to the latest installment of my Rest of Season fantasy baseball rankings! I had initially intended on highlighting some of the important injury news from around Major League Baseball. But then I realized that if I wrote a blurb about each injured player, I would finish this article after the All-Star Break. So instead, I will turn my attention to two starting pitchers who have pleasantly surprised fantasy managers through the first three months of the season. Will they continue to dominate the Senior Circuit, or are they in for a cruel summer?

Fantasy managers generally valued Zack Wheeler as an SP3 in 12-team leagues heading into the 2021 season. His ADP in Fantrax leagues was SP27, and he went 32nd among starters in NFBC Main Event leagues. Wheeler had seemed to establish some career baselines since returning from a two-year absence due to injury, but he suffered a relatively large dip in his 2020 strikeout rate. After striking out about 23 percent of hitters in parts of five seasons as a New York Met, Wheeler’s strikeout rate dipped to 18.4 percent in his first season in Philadelphia. His 2.92 ERA last season was well below his xFIP (3.76) and his xERA (3.55), both of which were more in line with Wheeler’s career norms. I will fully admit to not actively pursuing Wheeler in any of my drafts this season. Boy was I wrong.

Wheeler adjusted his pitch mix this year and it has worked wonders. What is interesting to me is that, on the surface, the changes seem contradictory. Last year he threw his sinker 23.7 percent of the time. The pitch had a -7 run value, which ranked in the top 10 among sinkers in all of baseball. His slider, on the other hand, resulted in a +1 run value. Last year, he threw that pitch 15.9 of the time. You would think he would feature the sinker more and forego the slider a bit. Instead, he has done the opposite. He has thrown the sinker just 18.5 percent of the time this year while increasing the usage of his slider to a career-high 25.1 percent. The main difference seems to be that his sequencing is much more efficient than in previous years.

Wheeler is throwing the sinker less often when he is ahead in the count and is relying more on his other offerings with two strikes. Needless to say, the changes have taken effect. Wheeler has established career-bests in PutAway rate with each of his four main pitches. All of this has resulted in Wheeler obliterating his previous strikeout rates. Before this season, Wheeler had never posted a strikeout rate north of 24.1 percent. This year, that number currently stands at 31.6 percent. Wheeler has never struck out 200 hitters in a season. At his current pace, he is likely to do so before the end of August. Wheeler’s Statcast page has more red in it than his uniform does. The same can be said of Vince Velasquez’s Statcast page, but only if you are referring to these unis.

Of course, the hot topic in baseball over the past few weeks has been pitchers doctoring baseballs. While I cannot sit here and tell you what each pitcher is or is not doing, Wheeler’s increased productivity this season seems rather legitimate. The spin rate on his pitches is well within the range of previous years. It seems like Wheeler has just found the perfect pitch mix and is clicking on all cylinders right now. I have continued to bump Wheeler up by rest of season rankings, and this week he sits 11th among starters. I can even see him moving up a bit further in the coming weeks. Wheeler is finally fulfilling his potential and putting it all together, and it is a joy to watch.

Another pitcher who has exceeded preseason expectations is Freddy Peralta of the Milwaukee Brewers. Fantasy managers considered Peralta an afterthought for most of fantasy baseball draft season. Peralta went 93rd among starting pitchers in Fantrax leagues this year. How crazy does that sound now? Of course, there was solid reasoning for the skepticism among fantasy managers. While most were aware of the talent Peralta possesses, his role was far from certain. He had to battle throughout Spring Training to earn a role in the Brewers rotation. Even when he had seemingly won the fifth starter spot, many of us watched nervously on Opening Day as Peralta came on to pitch in relief. It did not help that Peralta threw 53 pitches in just two innings while allowing two hits and walking three batters. Had Peralta lost the job before he ever had it? In a word, no.

He did make his first start of the year five days later in Chicago. Peralta allowed just one hit over five frames, and he was off to the races. Peralta currently sports a 2.28 ERA, 0.87 WHIP, and 35.9 percent strikeout rate. His strikeout percentage and strikeouts per nine innings are fifth among starters, and he enters the weekend eighth among starters in 2021 fantasy value. To say he has been a bargain would be a massive understatement. From a purely aesthetic standpoint, I would like to have Peralta even higher on my rest of season rankings than I do. I love watching him pitch and his stuff is filthy. However, there are a couple of things preventing me from declaring Peralta a top-20 fantasy starting pitcher going forward.

First and foremost, I fear an innings limit looming. Between the Minor and Major Leagues, the most innings Peralta has thrown in a season is 141.2. He threw just 126 innings combined between the 2019 and 2020 seasons. Granted, nobody threw a ton of innings last year. But I do not know if it is realistic to expect Peralta to approach 200 total innings this season. With that in mind, the Brewers are currently tied atop the NL Central. Circumstances (mainly the competition in the NL West) may dictate that Milwaukee sells out to win the division, and go with an “all hands on deck” approach. But it may behoove them to keep some bullets in the chamber for September and October. That may mean Peralta gets skipped a time or two this summer, or that his appearances are cut short on occasion.

Along those lines, Peralta is only currently averaging 5.2 innings per start as it is. Hence the “Fab 5.2 Freddy” moniker I came up with. (And if you do not know who the original Fab Five Freddy is, well, I guess I’m just old.) As dominant as Peralta has been this season, he may fall a bit short on wins and/or quality starts if he is not allowed to go deeper into ballgames. It is crazy to think that he has only pitched into the eighth inning one time this season, especially given that he has yet to allow more than five hits in a single start. He has gone fewer than five innings in four of his 13 starts to date this season. That is the same frequency with which he has pitched more than six innings in a game.

After striking out at least seven batters in each of his first 11 starts, Peralta only struck out six in each of his last two outings. The cause could be any number of things. It could be that Peralta is tiring as the first half of the season winds down. Maybe facing the same divisional opponent (Cincinnati) multiple times in a short span is a factor. Perhaps a slightly reduced spin rate in those two starts is a harbinger of something else at play. Or it could just be a bunch of noise. Whatever the cause, I think it is worth monitoring over his next few starts. I would not sell high Peralta at this juncture. However, I would hesitate to consider him more than a volatile SP2 over the remainder of the year.