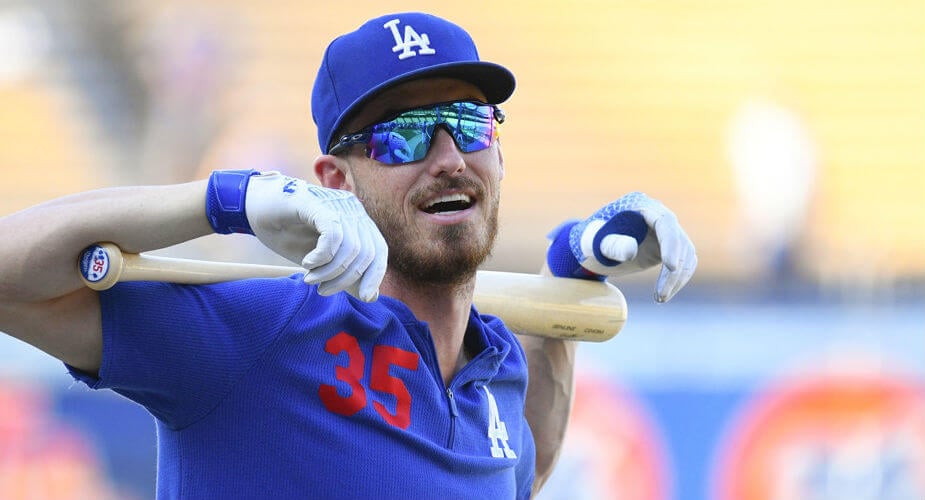 It has often been said that pitchers are extremely volatile in fantasy baseball due to their risk for injury. While that is certainly still true, everyday players are the ones seemingly going down in droves this season. Of the top 100 players in my rest of season rankings, an even dozen are currently on the Injured List. Only one is a pitcher, and he (Jacob deGrom, fingers crossed) is slated to return on Tuesday. Our own Dr. Nic Civale recently authored an excellent piece discussing some of the factors that may have contributed to this rash of injuries. You can read that here. In the meantime, we are left to sort through the chaos and navigate as best we can.

The biggest blow to fantasy managers this week is the loss of Mike Trout. Trout landed on the IL with a calf injury and is expected out for 6-8 weeks. That could keep him out until the All-Star Break. There is simply no replacing a player of Trout’s caliber, so managers will be in a bit of a bind. The Angels are not expected to call up Jo Adell to fill the void. Adell has struck out in over 35 percent of his plate appearances in Triple-A so far this season. After posting a K-rate north of 40 percent in the Majors last season, it is obvious that Adell still has some fine-tuning to do. Though deGrom and J.D. Davis are on the mend, Pete Alonso, Michael Conforto, and Jeff McNeil have all been placed on the IL. Insert Mets training staff joke here.

In brighter news, Cody Bellinger is working his way towards a return, which could happen as early as next week. The former MVP has been out since April 5 with a hairline fracture in his left fibula. His return would be a welcomed addition to a Dodgers lineup that recently lost Corey Seager. I have been inching Bellinger up in the rankings, and this week he cracks the top 50. We know he has the upside of a top-10 player, but I want to see how the Dodgers manage his workload before moving him up too high. I suspect that the team will be cautious with Bellinger, as their focus is on defending their World Series crown in October, and not necessarily in May or June.

The Marte Partay is one step closer to coming back into fantasy prominence as well. Ketel Marte returned to action on Wednesday after missing six weeks of action. Marte was red hot to start the year, so fantasy managers will hope he can pick up where he left off. The converted infielder is on the precipice of becoming outfield-eligible in many leagues, adding to his already considerable appeal. Meanwhile, Starling Marte has begun to take batting practice with the Marlins. He has also been out just over a month, and I would anticipate an early June return. The 32-year old is a steady source of fantasy production and can contribute in all categories.

The Cleveland Baseball Club (that is what we are calling them now, right?) optioned both Andres Gimenez and Triston McKenzie to their Triple-A affiliate in the past week. Gimenez often looked overmatched at the plate, posting a .179 batting average and 45 wRC+. I said before the season that I preferred Amed Rosario as a pivot play. Obviously, this news does nothing to change my stance. Rosario has not exactly torn the cover off the ball (.216, 65 wRC+) but he should be the team’s everyday shortstop for the foreseeable future. He also now has outfield eligibility in most leagues, giving his fantasy managers added flexibility. McKenzie has struggled mightily with command all season long. The 23-year old has walked 30 hitters and allowed eight homers in 31.1 innings. Yikes. I would not label either Gimenez or McKenzie as must-holds in redraft leagues.

Of perhaps greater importance is a move that Cleveland seems to have made on the field of play. It appears that James Karinchak has recently wrestled away the closer role from Emmanuel Clase. Karinchak has three saves this month, including two in the last week. More notable is that both saves came on consecutive days, while Clase has primarily been used in the eighth inning lately. I would not drop Clase, as I expect Terry Francona to utilize both in late-game situations. But I do believe Karinchak is the guy for now. He has simply been lights out and was a fantasy asset even before he was getting save opportunities. Karinchak has allowed one hit in his last 15 appearances and has struck out over half of the batters he has faced this season. Karinchak has elite upside going forward if he can harness his control.

The Tampa Bay Rays traded starting shortstop Willy Adames to the Milwaukee Brewers on Friday. This looks like a move that can be a win for fantasy managers on multiple fronts. Tropicana Field is perennially one of the worst parks to hit in. American Family Field has not quite lived up to its reputation as a hitter’s haven recently, but it is still an upgrade for Adames. The now-former Ray strikes out too much, but the same can be said of many players in today’s game. Adames currently has a 90th percentile barrel rate and has 20-homer potential over a full season. He is still just 25 years old, so it is not as if we are talking about a player with no upside going forward.

Of course, we in the fantasy community were excited when we got wind of this trade, but not necessarily because of what it means for Adames. We want Wander, amirite? Wander Franco has long been coveted in Dynasty leagues, and fantasy managers are chomping at the bit to see when the Rays will call up the much-ballyhooed prospect now that Adames is out of the fold. Though Franco has all the makings of a future fantasy stud, I continue to be lower on him for the 2021 season than most. That was the case when fantasy managers were drafting him ahead of both Adames and Joey Wendle before the season, and continues concerning my rest of season rankings.

Franco is still just 20 years old, and the Rays have Vidal Brujan and Taylor Walls in the fold. Tampa recalled Walls from Durham on Friday, so he should get the first crack at replacing Adames. Walls is a former third-round pick who had 28 stolen bases in 2019, so he could have some appeal if he gets significant playing time. I think Wendle is the biggest winner in the short-term, however. He has scored 54 runs in his last 93 games while hitting .291 and chipping in nine homers and 11 steals. Brujan has been a beast for the Bulls so far this year. He has seven long balls and seven swipes in just 16 games. Even following the trade of Adames, I think there are roadblocks that will prevent Franco from being a fantasy force in 2021.

Below are my updated rest of season rankings for 2021 Redraft leagues. I expanded the overall section because a reader recently made me aware of an issue with the syncing feature. Hopefully this will help streamline things a little going forward.