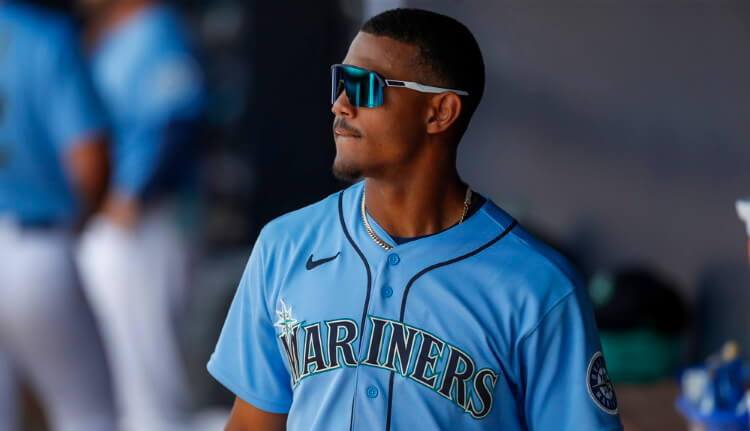 It is never too early to start thinking about next season. At least that’s what I tell myself whenever I am out of contention for a league title. In any event, since this is my final installment of this column for the 2022 season, I would look a bit beyond the final five weeks of the regular season. Our draft lobby will be open before you know it. So with that in mind, here are my never-too-early projections for next year’s first round. This was a fun exercise, as there were a ton of permutations I played with. If you just want to see my latest ROS rankings, just scroll to the bottom. And thanks for reading and providing feedback throughout the season. Hopefully, my rankings helped you along the way this year.

If you are in a Best Ball league, or one with daily moves, then Shohei Ohtani is the pick. The ability to deploy him at both pitcher and hitter in each scoring period is simply a cheat code. But if you must designate beforehand how you use him, that lowers his value ever so slightly. Therefore, I am going with Acuna here. Acuna is coming off a terrible knee injury and has only played three-quarters of the season. Yet he enters September as a top-50 hitter on the year. His knee is constantly giving him problems, but you wouldn’t know it based on his 25 stolen bases. I believe the injury is what has sapped his power (11 home runs). Assuming he is 100 percent by next spring, he should be back to the 40-40 threat we have grown accustomed to seeing in a potent Braves lineup.

If it is possible to post an under-the-radar top-three fantasy hitter on the season, Trea Turner may be doing just that. He is not dominating in any one category like Aaron Judge. But Turner contributes across the board at an elite level. He is in the top-10 in all of baseball in runs, RBI, stolen bases, and batting average. And he provides enough pop (18 homers so far) that he is not a drain in that area. He should threaten to score and drive in 100 runs this season, and this will likely be the case next year as well. The only nit to pick is that Turner will no longer provide dual-eligibility next season. All 130 of his appearances this year have occurred at shortstop. Shortstop is a bit more top-heavy than second base, but Turner is still an elite option going into next season.

As of right now, I believe Jose Ramirez has a very good chance of being a top-three pick in 2023 drafts. And as of right now, I have very little interest in drafting him there. Ramirez has provided top-five hitter value this season, but I have a bit of concern. First, he is turning 30 this month, and his stolen base totals have fallen off dramatically in recent months. In 281 games from the beginning of the 2020 season through this past June, Ramirez stole 49 bases. In his last 54 games, he was swiped just two bags. Ramirez relies on his savvy rather than pure speed to steal bases, and his unwillingness to run lately is a bit worrisome. He still figures to be above average in all Roto categories, but I just don’t know if I would be willing to pay that price.

Even if you do have to designate his position before your league’s scoring period, having Shohei Ohtani provides fantasy managers with a huge edge. He has provided a combined 7.2 WAR this season, trailing only Aaron Judge. He has better numbers than Gerrit Cole as a pitcher this season. And as a hitter, he can hit a game-winning, 427-foot homer off of Cole as he did on Wednesday night. There is no one else like him. This could be my FOMO from the past couple of seasons talking, but I would probably take Ohtani before Ramirez. But I do think that in typical fantasy baseball leagues, more managers will gravitate towards Ramirez. Ohtani’s UT-only status as a hitter could limit flexibility at other positions more than some may like.

A star is born. At just 21 years of age, Julio Rodriguez is posting second-round fantasy value this season. He is one of just three players in all of MLB to eclipse 20 home runs and 20 stolen bases so far this year. Rodriguez has slowed down a bit from his torrid first-half pace. But a wrist injury and his first 100-plus game season of professional baseball are the likely culprits. Once Rodriguez gets some more seasoning, there is no limit to what he can do for fantasy purposes. He should be a fantasy force for years to come and will be a coveted pick come Draft Day 2023. Given that we have not yet seen his ceiling, I think Rodriguez may go inside the top-five overall next season.

The knock on Aaron Judge was never if he could do it. We knew he could when he smacked 52 home runs as a rookie in 2017. The question was whether he could stay healthy. Well, he played in over 90 percent of games last year and has only missed four tilts this season. That should be enough to ease concerns for some fantasy managers. Judge has 15 more home runs than any other player in baseball this season. The last time there was a double-digit discrepancy between the Major League home run leader and the runner-up was 2010. Oh, by the way, he also has 15 stolen bases. No other player in baseball with at least 15 stolen bases has more than 22 homers on the year. Judge has a great chance to lead the world in home runs again next season, regardless of where he plays.

Since the beginning of the 2021 season, Jacob deGrom has made 21 MLB starts. In those games, he has allowed 57 hits while striking out 201 batters. You would be hard-pressed to replicate those numbers in MLB The Show. Considering how scarce quality starting pitching is, deGrom can easily be a top-five overall pick if he continues to dominate in September and October. For now, I will put him at number seven overall with the arrow hopefully pointing up. He is easily the most valuable pitcher on a per-start basis. The question becomes whether you are getting 30 starts, 20, or 12. Most fantasy managers will be willing to eat an IL spot at times given the upside deGrom provides combined with the dearth of quality options usually floating around waiver wires.

Juan Soto was a top-three overall pick in most formats this season. However, things did not exactly go as planned for the 23-year-old. Saddled by a poor Nationals, lineup, Soto was hitting just .224 with 14 home runs at the end of June. Of course, Soto is now a San Diego Padre as a result of a deadline deal. His numbers in San Diego have not exactly jumped off the page either. Soto has just three homers in 24 games in San Diego. Regardless of whether he turns it around this year, I see many fantasy managers giving him a pass for this season. San Diego averages nearly a full run more than Washington has this year, even without Fernando Tatis Jr. Soto should put up monster numbers in his first full season in San Diego and could very easily lead the Majors in runs scored.

I believe there will be much debate over who should be the first pitcher (excluding Ohtani) off the board next year. For now, I have deGrom in the top spot, but you can make the argument for several others. Justin Verlander has posted the best fantasy numbers of any starting pitcher, but he will be 40 years old in February. Gerrit Cole and Corbin Burnes feel like safer options. But both have been very human this season, particularly in recent weeks. Some may fancy a Dylan Cease or Sandy Alcantara. Meanwhile, all Shane McClanahan has done is provide top-two SP value including some ridiculous metrics. For example, his strikeout rate is higher than his hard-hit rate allowed. If his current shoulder injury is not a long-term issue, McClanahan could be a first-round pick as soon as next year.

Mookie Betts has already tied his career high with 32 home runs this season. He trails only Judge in fantasy value among Major League outfielders. Betts is in the top-five in all of baseball in runs scored and home runs. He has also made solid contributions all around, with 70 RBI and 12 steals. It will be interesting to see how fantasy managers treat Betts next season. There is no reason to expect a major dropoff from this season’s production. And yet, he is no longer the 30-30 threat he was in Boston. He also hasn’t hit over .300 since 2018. Betts hits atop a loaded lineup, so counting categories should provide enough of a floor for fantasy managers to buy in early. He may not be a sexy pick, but he can anchor fantasy lineups with his all-around game.

Bryce Harper has missed nearly half of the 2022 season, yet is still a top-50 hitter in Roto value. That upside is not to be ignored. Harper has been relatively healthy over the past half-decade, so I expect managers to trust his track record. Since 2018, Harper has played in 586 games. In that time, he has scored 395 runs, hit 132 homers, driven in 383, and stolen 58 bases. That roughly equates to a 110-35-105-15 pace over 162 games. You are not going to find many hitters who can pack quite a punch. What is perhaps more interesting is that Harper’s batting average has improved in each of those seasons. If he can continue that trend, Harper will be squarely in the mix for the 2023 National League MVP award.

Despite what appears to be an MVP season from Paul Goldschmidt, I still think Vladito edges out him and Freddie Freeman as the top first baseman selected next year. That may certainly be up for debate, as is whether fantasy managers will make this choice at the end of the first or early second round. Several high-upside starting pitchers would still be available, as are stud hitters like Kyle Tucker, Manny Machado, Francisco Lindor, and Yordan Alvarez. And I haven’t even mentioned breakout players who contribute in multiple categories such as Adolis Garcia and Randy Arozarena. But like Soto, Guerrero has done enough in a down year (still a top-25 fantasy hitter) and has enough youth and upside to where we know how good he can be because he did it just last year. I still expect managers to regard Guerrero quite highly come next season.

Fantrax was one of the fastest-growing fantasy sites over the last few years, and we’re not stopping now. We are the most customizable, easy-to-use, and feature-rich platform in the industry, offering the greatest fantasy experience for your dynasty, keeper, redraft, and best ball leagues. Fantasy sports doesn’t sleep, and neither does Fantrax, with seasons running 365 days a year. Take your fantasy leagues to the next level now at Fantrax.com!
MLB ROS Rankings
Share