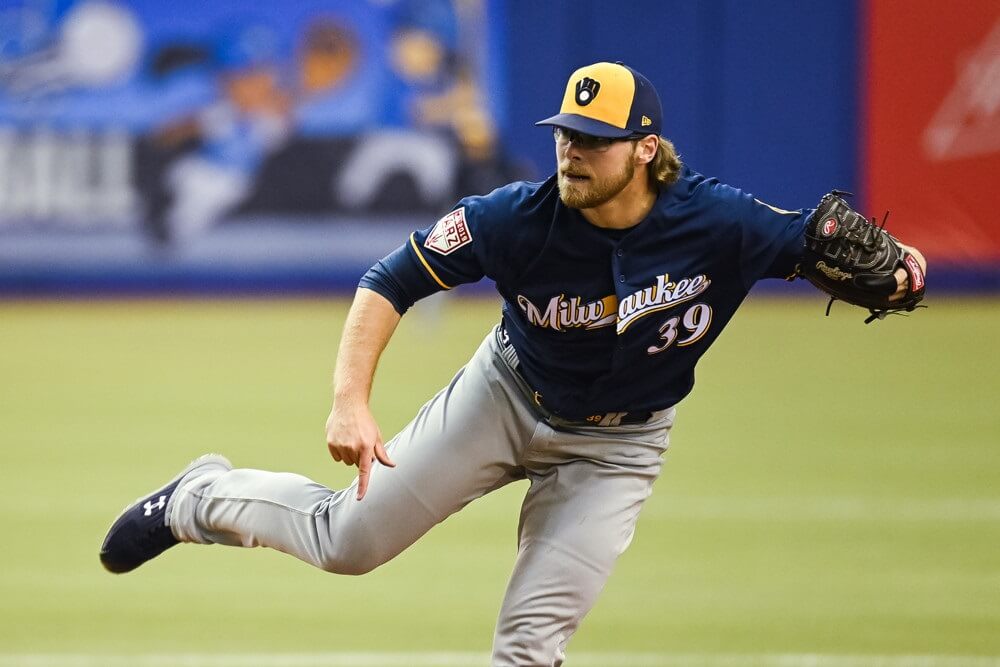 Corbin Burnes was one of the breakout stars of the shortened 2020 Major League Baseball season. The converted reliever made nine starts for Milwaukee last year. He finished with a healthy 26.7 K-BB% and an even healthier 2.11 ERA. After allowing 3.12 home runs per nine innings in 2019, Burnes cut that number tenfold in 2020. He allowed just two home runs in 59.2 innings last season. His walk rate did increase a tad in 2020 and ended up right at an even 10 percent. But he was able to mitigate that with a corresponding rise in his strikeout rate. The arrow was certainly pointing up concerning his outlook for 2021. But even his most ardent supporters would have a hard time believing what Barnes has accomplished over his first four starts this season.

All Burnes has done is become the first pitcher in MLB history to record 40 strikeouts without issuing a single walk over a four-start span. He has struck out 47.1 percent of hitters who have stepped into the box against him. Even if you removed plate appearances by opposing pitcher, that number would still be north of 43 percent. You can make the argument that Burnes has been the best pitcher on planet Earth so far in 2021. OK, maybe second-best behind Jacob deGrom, AKA deGOAT. But Burnes has been lights out by any statistical measure. We are running out of superlatives to describe his performance over the last nine months. I mean, there are standout pitchers in high school and college who don’t have peripherals like this: 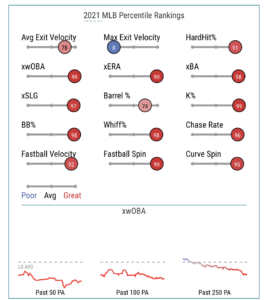 Burnes has continued to develop his cutter this season, and the results have been devastating. Last year, his cutter had the fifth-lowest run value (-11) of any offering in the Majors, per Statcast. That was quite impressive considering he only threw the pitch 31.4 percent of the time. Burnes has wisely increased its usage to over 50 percent this season, and it has been better than ever. His average cutter is a full three miles per hour faster this season than it was last year, and 1.5 MPH faster than anyone else’s cutter. He also spins it at a rate exceeded by no other pitcher in baseball and matched only by Trevor Bauer. Opposing hitters simply have no answer. They have combined to hit .098 against the cutter thus far. Statcast currently credits Burnes’ cutter with the lowest run value (-8) of any pitch thrown in the Major Leagues this season.

With all that said, there are going to be people who read my gushing review and then check to see where Burnes lands on my rest of season rankings and think I have him too low. I can hear the cries now. “If he’s a top-two pitcher, how can you have him ranked 10th?” I get it. Here is the thing though. Rest of season rankings means exactly that – rest of season. We cannot add his 40:0 K: BB ratio to whatever numbers we think he will accumulate going forward. Those numbers essentially do not exist for this exercise. Of course, we know that his recent performance does impact any set of rankings, including mine. I have bumped Burnes up each week this season, and I may continue to do so in the weeks ahead.

At the same time, we also have to bear in mind a couple of things. First, Burnes only has 17 career Major League starts under his belt. He has yet to exceed 60 innings in any MLB season or 150 innings in any year as a professional. That does not mean that his arm is going to fall off should he exceed that threshold this year. But I also do not think it is crazy to think that the Milwaukee brass may not feel the need to overextend their budding superstar pitcher throughout the regular season. This is a team with playoff aspirations that thinks long-term. They have other pitchers on the roster who can step in and make a spot start when needed. I would not be surprised if Burnes finishes the regular season with fewer than 30 starts.

No matter how you slice it, Burnes has been an elite performer since 2020 and there is no reason to think that will change anytime soon. I just think we should hold off on engraving his name into the Cy Young Award or assuming he will exceed 300 strikeouts this season. If the season started tomorrow, I have little doubt Burnes is an SP1. I just have a hard time putting into the top five overall, at least for now.

When the Toronto Blue Jays acquired Steven Matz in January, it did not move the fantasy needle very much. Matz was coming off an awful season in New York in 2020. He allowed 14 home runs in 30.2 innings pitched (yes, you read that correctly) and was removed from the Mets starting rotation after just five starts. He would eventually make a sixth, which did not go any better than the previous five. After six seasons in Gotham and more than a decade in the Mets’ organization, the club decided to move on. They traded him to Toronto in January for three pitchers who have yet to combine for 100 Major League innings pitched.

Considering how bad Matz was last season, a move from the National League East to the American League East did not exactly leave fantasy managers with the warm and fuzzies. Matz went off the board well after pick 500 in most drafts. So far, he has vastly outperformed his draft-day price. He has won all four of his starts so far and has a nice, shiny 2.31 ERA. Per Statcast’s Pitch Arsenal Stats page, Matz is one of seven hurlers who have multiple offerings with a -3 run value or better. His changeup has kept hitters off-balance, and he has been able to get them to roll over on the sinker. He has allowed just two gopher balls in 23.2 innings thus far in 2021.

In the three seasons in which Matz made at least 20 starts, he had a combined 3.89 ERA, 1.27 WHIP, and averaged nearly a strikeout per inning. Now to be fair, the “rest of season” argument I used when discussing Burnes has to apply here as well. Let’s say we project Matz to finish the year with those exact numbers – a 3.89 ERA and 1.27 WHIP over 180 innings. That means for the rest of the season, he would have to pitch to the tune of a 4.14 ERA and 1.31 WHIP. I think those numbers are well within range for Matz. I am not suggesting Matz will maintain his current fifth-round value, or even that he will finish anywhere in that stratosphere. But I do think he is a solid back-of-the-rotation starter, and that has value in fantasy leagues.