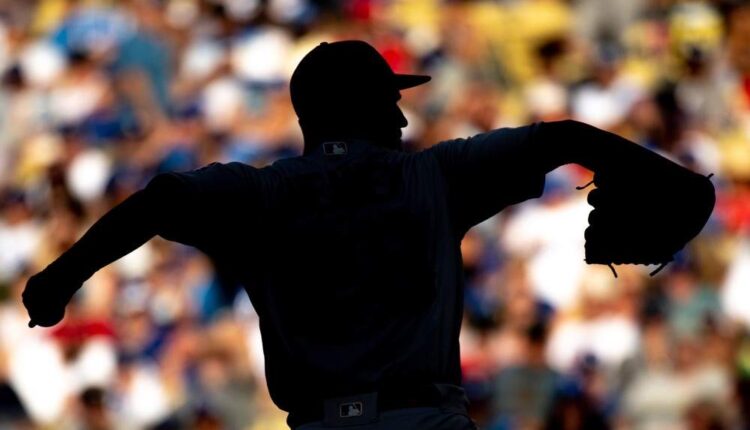 The injury god has been a real meany to Andrew Heaney. Through his first four MLB seasons – if you can even call them that – Heaney amassed 162.2 innings across 31 appearances. He’s battled through a myriad of injuries, as pitchers tend to do. Somehow he is still just 27 years old, however, and in 2018 he managed to string together 180 strong innings.

Those 180 innings for Heaney in 2018 signaled his coming out party. He made 30 starts with a 4.15 ERA, 9.00 K/9, and 2.25 BB/9. It was a hefty workload considering he only tossed 55.1 innings over the past two years combined. Not to mention that the Angels weren’t competing down the stretch. In any case, he got his work in, and the fantasy world celebrated.

Unsurprisingly, he faded a bit down the stretch in what was his first full season. He managed a 3.78 ERA over 102.1 innings in the first half but struggled to a 4.64 ERA over 77.2 second half innings. There is a reason to believe he deserved better, however. Let’s compare his first and second half numbers.

While his velocity remained consistent, his results did not. His hard contact elevated into dangerous levels, and as you would expect he got knocked around pretty good. The hard contact led to more home runs, which xFIP normalizes. While we can’t rely on that, Heaney is a fly ball heavy pitcher who gets the benefit of a spacious home ballpark. His K/BB numbers actually improved over the second half though, which is reassuring.

I mentioned the benefits of pitching in Anaheim, and Heaney sure enjoyed it. He posted a 3.22 ERA over 89.1 home innings but got kicked in the pants on the road with a 5.06 ERA over 90.2 innings. Personally, I find it hard to rely on home/road splits for pitchers who aren’t wearing Rockies jerseys. His FIP splits, in this case, confirm my general skepticism. His home FIP was 4.05, while his road FIP was 3.94. Slightly less contrast there.

So, in spite of these splits, I think Andrew Heaney kind of is who he is. Perhaps one split that is of note, however, is his inability to pitch with runners on base. His K-BB% dips from 20.4% to 14.2% out of the stretch, while his FIP skyrockets from 3.37 to 4.95. As long as he can keep the walks down that won’t bite him too much, but his 1.65 HR/9 with men on base is an issue.

Despite his primary pitch being a “sinking” fastball, he doesn’t induce a lot of ground balls. The sinker generates just 37% grounders, with 9.24% whiffs, and a .286 BAA. He doesn’t use it like a ground-ball pitch either, throwing it all over the zone. His primary secondary offering is his slurvy breaking ball. He bumped up that pitch to 25% usage last year (41% vs LHH). It allowed a mere .187 BAA with a 20% whiff rate and helped mitigate same-sided bats to a .238 wOBA.

His changeup, while certainly his third pitch, is a very viable pitch as well. It’s largely just a weapon against right-handed hitters, but earned a solid 14% whiff rate with 51% ground balls. It was a problem pitch for him in June, however, when he lost his feel for it. Fortunately, he was able to rebound. 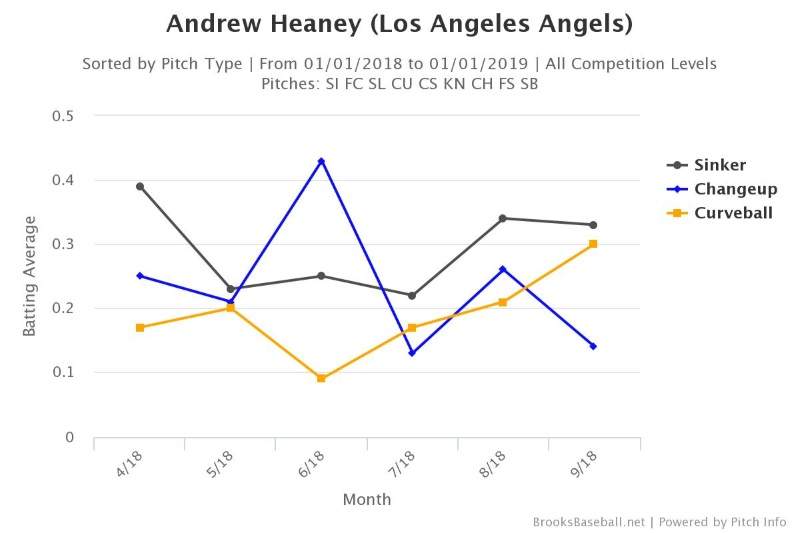 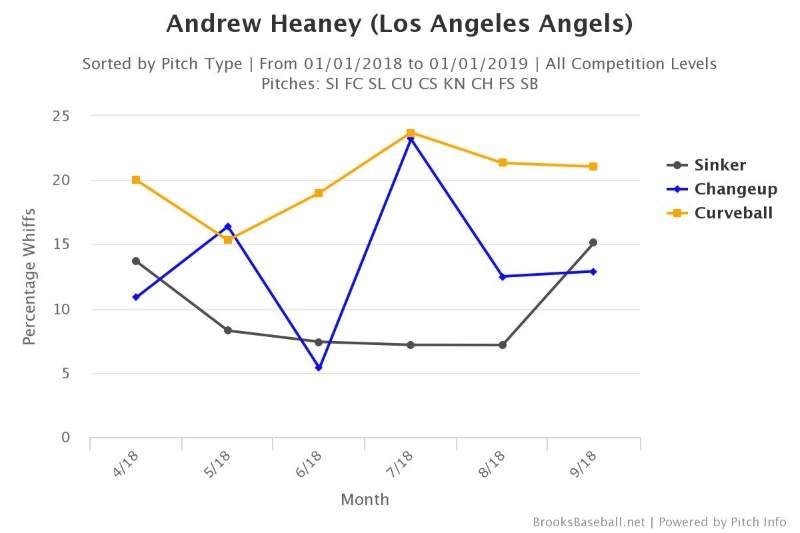 His whiff rate vanished on the changeup and it got crushed, but that appears to be a blip on the radar that elevated his season-long ERA (his June ERA was 4.45). With more consistency with the changeup, he should be able to avoid some blow-ups and better keep the ball in the yard.

There are a lot of things going for Heaney in 2019. He’s finally got a full season under his belt, making a full workload more likely. His home/road splits should even out, making him more consistent. He has a solid three-pitch mix that can keep righties from crushing him while being death on lefties. While he allows more hard contact than you’d like to see, he doesn’t give away free passes.

Of course, there are plenty of negatives. That’s why he’s only going as the 45 starting pitcher off the board according to early Fantrax ADP. He does yield too much hard contact, struggles hard with runners on base, and you still can’t forget the extensive injury history. Steamer projects Heaney for 178 innings of 3.96 ERA ball with a slight regression in both his strikeout and walk rates. His 65.2% first-pitch strike rate was 12th in MLB among qualified starters, so I’m not so sure we see his walk rate slip. The K’s might come down a bit, but an 11.8% swinging strike rate is healthy enough for close enough to a strikeout per inning.

It’s not a bold take, but I think Heaney’s SP45 ADP is about right. If you don’t mind the injury risk, he shouldn’t be far behind Yu Darvish, who is going 21 picks before Heaney. Conversely, Shane Bieber and Nick Pivetta are going right in the same range as Heaney, and I’d rather shoot my shot with either of them. They provide a higher strikeout upside with less injury risk. I’m not sure Heaney has a ton of upside from what we saw a season ago, making it unlikely I’ll be investing much.

Nathan Dokken is a member of the FSWA and has been featured on numerous radio shows, podcasts, and magazines. He is the host of the Nasty Cast and Fantrax Dynasty Baseball podcasts, and his written work can be found at Razzball and Fantrax HQ. He is on Twitter @NathanDokken. If you enjoyed this article please check out his full archive.