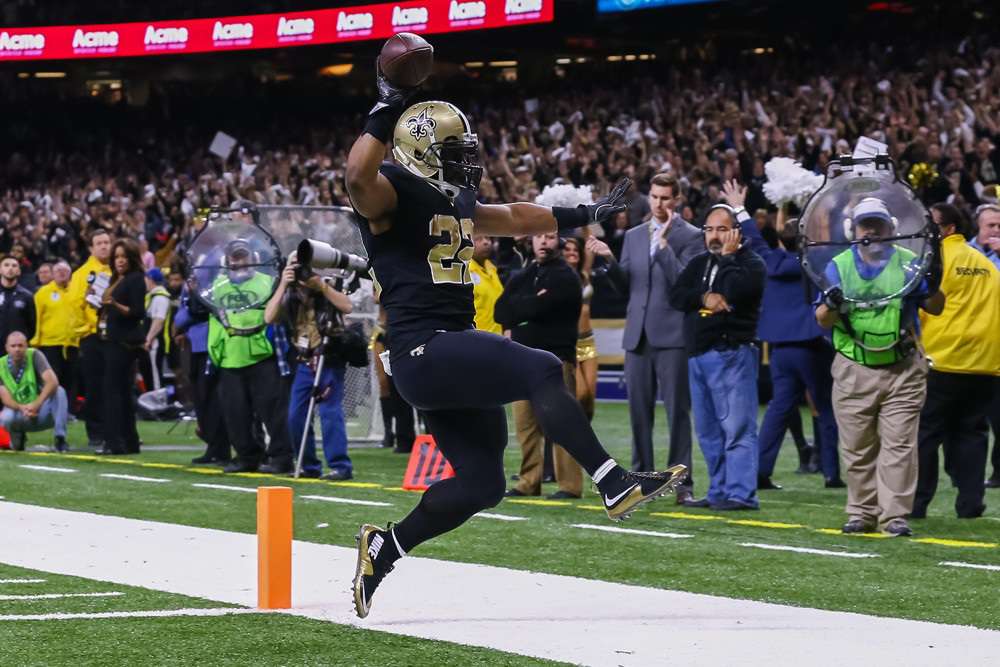 Sleeper. The term is thrown around loosely these days as more and more content is being pumped out and regurgitated every offseason. If you are reading this, the odds are you are an astute fellow or gal in the Fantasy Football world and I am not going to surprise you with my bold RB sleepers. No. I will leave that to my “busts” portion of this piece. That seems to get the people going, anyway. Hot busts takes makes the world go round, after all, so sit back and relax while I take you through my running back sleepers and busts for 2018.

The running back position can be the most stable or most volatile piece of your roster in Fantasy. We crave the workhorse back and despise the player who is part of a committee. Yet, workhorse running backs are not bust-proof and players that share touches can, in fact, be sleepers. Let’s do our best to see through the number of touches and dive into projected production to determine who the sleepers and busts are for Fantasy Football.

The point is you have to take a shot in Fantasy Football. The great news with the 2018 Patriots running back conundrum is that I can already assume that one of these guys is going to return value in drafts. Jeremy Hill and Mike Gillislee will be competing to make the team, James White is a PPR guy but even with 56 receptions, he was not even an RB3 in PPR leagues in 2017. The Patriots shockingly spent a first round pick on Sony Michal but a fifth-round investment might be too rich for my blood for a rookie who could be benched if he shows signs of ball security issues.

That leaves us Rex Burkhead who has an ADP of 7.07 in standard scoring leagues and 7.08 in PPR. Burkhead is a sleeper because he can do everything. Burkhead scored all five of his touchdowns last season from inside the 20-yard line which means the Patriots feel comfortable using him in the red zone. In the 10 games he played in 2017, Burkhead averaged 3.6 targets per game. What I love most about that is that the Patriots will undoubtedly use Burkhead more in this role while Julian Edelman is serving his four-game suspension.

Burkhead has stand-alone value in a committee because of his versatility and that makes him a sleeper in the seventh round.

For more draft strategy, rankings, and great fantasy football analysis check out all of our 2018 Fantasy Football Draft Prep.

Anderson had the quietest 1,000 rushing yards ever in 2017. That is right, C.J. Anderson was an RB2 in Fantasy Football with 1,007 yards on 245 carries and 28 receptions for 224 yards and four touchdowns. The Panthers signed him after the NFL Draft and Anderson now steps into Jonathan Stewart’s role in this offense which saw 198 carries last season.

Anderson thrives in the shotgun formation. The Broncos were tied for eighth in the NFL in the percentage of run-plays out of the shotgun. The Panthers were tied for second as they ran 72 percent of their plays out of the formation. The Run/Pass Option (RPO) is the identity that the Panthers have and Anderson will be a thumper in this offense. Anderson’s ability to cut outside is underestimated. Cam Newton will draw a lot of attention from defenses which will give Anderson great opportunity for long gains.

Christian McCaffrey looks to have a big year but the Panthers are not going to want to burden the entire workload on the second-year player. That is not part of their game plan and nor should it be. McCaffery had 80 catches last year and could push for 90 in 2018, but the run-first Panthers are going to give Anderson 200 carries which includes goal-line work. He is going off the board in the eighth round and should be considered a sleeper as he has RB2 upside in standard leagues.

Gore has had at least 250 carries in every season since 2010. He is the unsexiest draft pick in Fantasy Football and his 14.07 ADP is proof. This is the stuff that RB sleepers are made of. Gore is 35 years old and is back in Miami.  The Florida born, former Miami Hurricane will look to finish his career as a Dolphin and this could very well be his last season in the NFL.

Gore is one of the most well-conditioned players the NFL has seen for the past decade and he steps into a role that could use a first and second down back. Kenyan Drake assumed these duties at the tail-end of last season but it seems the Dolphins are not committed to Drake. Along with signing Gore, the Dolphins drafted Kalen Ballage who provides a similar skill-set to Drake.

Gore will pass Curtis Martin for fourth on the NFL’s all-time rushing list early on as he only needs 76 yards to do so. If he plays 16 games – and he has for the past seven years – he can actually put in a dent into the 1,244 yards he needs to pass Barry Sanders for third all-time. If his goal is to pass Sanders, which is quite possible if he plays in 2019, then there is no question that the Dolphins will do their best to get him there. As crazy as it sounds, Gore has a chance at 250-plus carries for the eighth straight year. 200 should be no problem.

Last season Gore was an RB2 with 261 carries for 961 yards and was the RB20 in Fantasy Football. This season he is at worst an RB3 and that makes him a sleeper as he is being drafted as the RB57.

Ingram is going to miss the first four games of the regular season due to suspension. While he was the RB6 last year and has RB1/2 appeal for the rest of season when he does return to the lineup, I am telling you to pump the breaks on Mark Ingram. Ingram is a very good running back in the NFL but his 4.09 ADP is too steep which will make him a bust for 2018.

The Saints will start the season with Alvin Kamara who Sean Payton has already made clear is the running back of the future for New Orleans. Terrance West will provide the bruiser role up the middle and Jonathan Williams and Boston Scott will be mixed in sparingly. There is a scenario in a contract year for Ingram that the Saints do not utilize the seven-year pro like they should even when he is inserted back into the lineup.

A fourth-round pick for someone who will only play 12 games is troubling especially when we consider that Ingram had a career-year last year that would be tough to duplicate regardless of missed time.  Ingram is being drafted over guys like Marshawn Lynch, Sony Michal, Royce Freeman, Marlon Mack, and Jamaal Williams who could all get the majority of their team’s workload in a projected full 16-game slate. Fade Ingram unless he slips into the fifth/sixth round of Fantasy drafts.

The undersized Jones has the reputation as a burner. At 205 pounds, Jones only ran a 4.53 40-yard dash at the NFL combine. Compare that to Royce Freeman who ran a 4.54 at 229 pounds. Jones’ college production is nothing to slouch at but his opportunities in space can be vastly attributed to gaping holes created by the UFC offensive line and system.

Jones comes into his rookie season with his quarterback as Ryan Fitzpatrick for the first three games. He will be competing with Peyton Barber for first and second down duties. Jones is not known as a passing back and that role belongs to Charles Simms on the Buccaneers.

While Jones will have every opportunity to win the majority of the workload, he will still be in a committee. The former Trojan has an upright running style that worked well in College Football but has rarely been effective in the pros. Jones 5.07 ADP scares me on a team that will be passing often as they will be down in games.

Aaron Jones will be suspended for the first two games of the season. This will give Jamaal Williams and Ty Montgomery first crack at touches in the Packers backfield. Jones flashed in two of his four starts last season rushing for 125 and 131 yards respectively. However, in the other two starts, he did not have more than 50 yards in either game.

If Jones was awarded a guaranteed 15 carries per game, then I would say he was worth his 8.05 ADP which is a full two rounds ahead of Ty Montgomery. It must be understood that Jones’ production last season was a result of volume due to necessity. Towards the end of the season when all Packers running backs were active, Jones was blatantly phased out of the offense while Williams was receiving about 20 carries per game.

Williams is only being drafted one spot ahead of Jones in standard leagues but it is clear that he is the preferred back on first and second down. Montgomery will most likely play out of the slot and assume third-down running back duties while Jones will be used sparingly. Jones is a home-run threat who is best used with limited touches. His production will be capped by his utilization, making him a bust in Fantasy Football.

Who is this year’s Alvin Kamara?