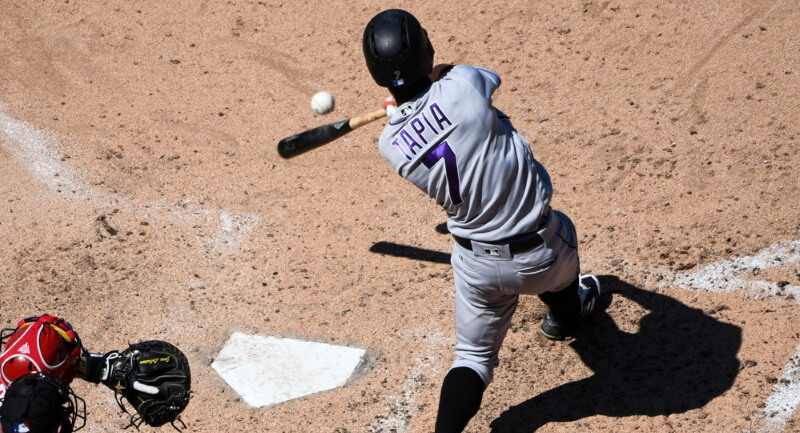 With all the talk surrounding other more exciting young Rockies players in Sam Hilliard, Garrett Hampson, and Brendan Rodgers, we often forget about Raimel Tapia. To finish off 2020, he sneakily provided a quality batting average, OBP, and steals for Raimel Tapia, the underrated Rockies hitter. Typically, we fade players providing little power with some speed. However, Tapia can provide some sneaky OBP and batting average, especially as the primary leadoff hitter for most of the 2020 season. As always, we dig into what happened in 2020, batted ball profile, plate discipline, Statcast data, and more to figure out what to expect moving forward for Raimel Tapia, the underrated Rockies outfielder.

So what happened in 2020 with Raimel Tapia, the underrated Rockies outfielder? Tapia reached career highs in batting average and OBP and almost tied his career-high in steals. In 2019, he bounced around in the batting order, but in 2020, he finished the season strong hitting in the leadoff role. Tapia finished with one home run, 26 runs, 17 RBI, and eight steals with a triple slash of .321/.369/.402. He also totaled a 6.8% walk rate and an 18.4% strikeout rate.

With little to no power, unsurprisingly, Tapia finished with a 21.5% fly-ball rate and a 19.3% pull rate. However, both dropped in comparison to a 25.8% fly-ball rate and a 35% pull rate in 2019. Since power isn’t his strength, Tapia doesn’t fall into the category of a power hitter with a pull heavy and fly ball profile. With more plate appearances, these numbers could fluctuate back to his career rates.

Again, we don’t expect the power and quality of contact for Tapia to rank highly, so it falls in line with the expectations. To further back up the lack of home run power, Tapia finished with an 88.4 mph average exit velocity on FB/LD (No. 247), tied with Hanser Alberto. The only Statcast metric that ranks highly includes sprint speed, where Tapia ranks in the 82nd percentile, which again falls in line with providing some steals.

When comparing his 2019 and 2020 Statcast data, the percentile rankings dropped slightly in 2020. Across the board, Tapia’s barrel rate, average exit velocity, and hard-hit rate finished below his 2019 numbers, and thus the percentile rankings decreased as well. Similarly, Tapia logged a 90 mph average exit velocity on FB/LD (No. 221) that ranked higher than his 2020 numbers. Over a full season, maybe his 2020 numbers even out closer to his 2019 numbers.

Next, we mention a highly analytic narrative (kidding) with the added muscle for Raimel Tapia, the Rockies underrated outfielder. In March of 2020, Tapia gained about 15-20 pounds and adjusted his diet and training program. As I mentioned in the staff roundtable about breakout hitters we trust, I referenced Luke Voit and the best shape of his life narrative.

When we observe improved results paired with improved body composition, I tend to take notice. Thus with career bests or near career bests in 2020, Tapia provides an intriguing profile overall. Hopefully, with more plate appearances, the power improves as well with the added muscle for Tapia. For instance, maybe he breaks the double-digit home run range in the future.

Raimel Tapia makes it 3-0 #Rockies on a base hit RBI. pic.twitter.com/3zoQbnvVCY

As noted by Thomas Harding, who covers the Rockies for MLB.com, Tapia adjusted his swing in Spring Training since he struggled with his timing. Tapia’s swing typically involves an open stance with a slight leg kick and toe-tap. However, in Spring Training, he worked with their hitting coach to improve his timing even though his strengths lie with his bat to ball skills. A couple of narratives to note and monitor into the offseason.

As a lefty hitter, we check into his splits against southpaws. With an above-average hit tool, Tapia hits well against both lefties and righties, particularly in 2020 and across his career. Against lefties in 2020, he finished with six runs, zero home runs, eight RBI, and one steal with a triple slash of .364/.390/.473.

On the flip side, against righties, Tapia logged 20 runs, one home run, nine RBI, and seven steals while slashing .302/.361/.372. It’s important to mention that Tapia faced lefties in 29% of his plate appearances in 2020. Although he compiled more counting stats against righties, Tapia notched a higher triple slash against lefties.

What should we expect in 2021 for Raimel Tapia, the underrated Rockies outfielder? According to Roster Resource, Tapia projects as their leadoff hitter, and hopefully, that’s where he bats for the majority of the season moving forward. Tapia provides quality on-base skills, minimal platoon splits, and some speed.

In his final 150 plate appearances, Tapia batted in the leadoff spot. He finished with one home run, 17 runs, 11 RBI, and six steals with a triple slash of .324/.351/.410. However, in his first 56 plate appearances in 2020, Tapia often batted in the bottom third of the Rockies lineup. During his first 56 PA, Tapia finished with zero home runs, nine runs, six RBI, and two steals while slashing .311/.418/.378. Reasons for optimism include the quality batting average, OBP, potential leadoff role, and double-digit steal upside.

Taps it wayyyy over the wall. That's how you set the tone! 🦀 pic.twitter.com/SsaU21dJpd

Reasons for Concern – Playing time and lack of power

In the early mock drafts, Tapia averaged a 248 ADP with a high pick of 132 and a low pick of 362, so a pretty wide range. Based on those mock drafts, Tapia ranks as the 55th outfielder drafted. Coming into 2020, Tapia held a 472 NFBC ADP and a 527 Fantrax ADP, meaning drafters took notice, and it reflected in the mock draft ADP. Assuming Tapia holds onto the leadoff spot for the Rockies, we expect Raimel Tapia, the underrated Rockies outfielder, to continue to produce heading in 2021.

However, the risks involve the Rockies management and how they handle his usage. Outside of Trevor Story, Charlie Blackmon, and Nolan Arenado, some of the Rockies hitters present playing time risks. Another concern includes the lack of power even though it comes with a high batting average and OBP with some steals. Tapia isn’t a league winner by any means, but keep him in mind as a fourth or fifth outfielder.

The sun has set on the 2020 MLB season, but we are already preparing for next year. Keep track of all our 2020-21 MLB Offseason Analysis.