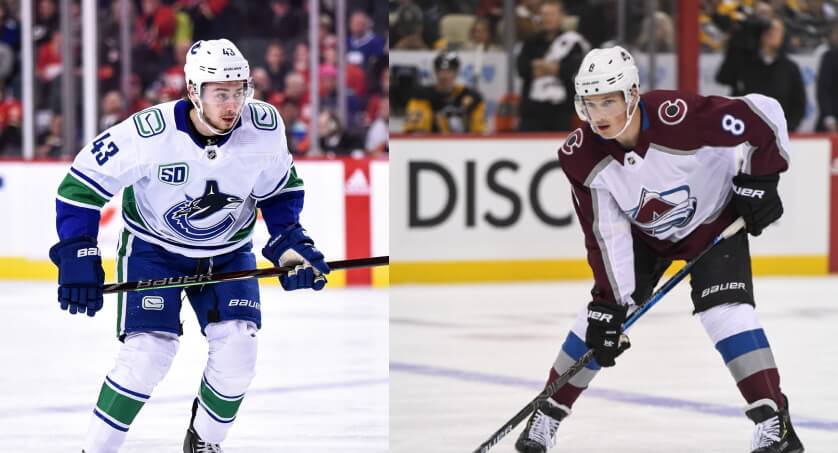 Whether you’re an athlete, a fan, a fantasy player, whatever you might call yourself, if you love the sport, we know you’ve had yourself a player debate. Who would you want on your team? Wayne Gretzky VS. Mario Lemieux, Patrick Roy VS. Martin Brodeur, Alex Ovechkin VS. Sydney Crosby, c’mon you know you’ve had at least one of these player debates. Recently, around the NHL, there has been plenty of chatter around emerging superstar defensemen Quinn Hughes and Cale Makar.

Well, here at Fantrax, we love a good debate too. We have a great group of writers and podcasters who are all very knowledgeable and passionate, but we don’t always agree. Therefore, an internal player debate has emerged, and we’re bringing it to you to help us decide!

For our first ever fantasy hockey staff debate, we bring you Hughes VS. Makar. It’s time to dive a little deeper and pick apart what makes these two power-play quarterbacks so good for their respective teams.

This player debate could be the defense position version of Crosby VS. Ovechkin for years to come. If you’re starting a team from scratch, or building a dynasty team and need to pick a number one defenseman, it’s a close call.  For me? I’m going with Vancouver Canucks defenseman, Quinn Hughes. The first thing that intrigues me most about Hughes is that he is a year younger than Makar. That’s an extra year of service time for me and my team. Additionally, Hughes can call himself an All-Star, although I do agree Makar was snubbed an All-Star appearance this year.

Hughes comes with the exposure to other great Canucks players. Most noteworthy, Hughes is skating on the first power play unit with fellow all-star, Elias Pettersson, as well as Brock Boeser, J.T. Miller and Bo Horvat. Vancouver has converted on 23.4% of their power play chances this year. As a result, thats good for seventh overall in the NHL. Although tied at three in power play goals, Hughes has the edge on Makar with 21 power play points. On Monday against the Predators, Hughes notched three assists, two of them coming on the power play. With Colorado down at 19.4%, 16th overall in the NHL, Hughes will figure to see more success on the power play.

If I’m building a dynasty from scratch, give me Hughes. More ice time at even strength and on the power play leads to more shot quantity and higher scoring chances.

Both blue liners are having excellent rookie campaigns, and — with all due respect to the other rookies this year — they will surely finish among the top two spots in Calder Trophy voting. If you are given the option, deciding which defender to take in your fantasy league isn’t an easy choice.
Hughes has the edge in points, 44 to Makar’s 42, however Hughes has played in 10 more games, giving Makar the better point per game average (0.89 to Quinn’s 0.77). Both players are exposed to some great talent on their respective power plays, with Makar playing with the likes of Nathan MacKinnon, Mikko Rantanen, and Gabriel Landeskog. The Av’s power play is clicking at 19.4% — 16th in the league. It could have been higher if the aforementioned Rantanen and Landeskog, as well as Makar, had been healthy all year. In any case, both d-men are quarterbacking (what should be) lethal power plays for years to come.
As always, it comes down to the categories your league uses. If you include hits, Makar has a noticeable advantage there. Hughes doesn’t throw his body around much, he relies on his stick-handling and smooth skating to defend. This leaves him with just six hits so far on the campaign. Meanwhile, Makar has 38 hits. It’s not a high total, but it can make a difference.
Both players should be among the first defensemen off the board in any dynasty league. They’re both highly productive now, and have extremely bright careers ahead of them. All things considered, I would take Makar first. His point percentage and extra hits are enough to give him the slight edge in my books.

It’s a tie for us! You can’t go wrong with Quinn Hughes or Cale Makar. Let us know your thoughts in the comments or on any of our social media accounts!