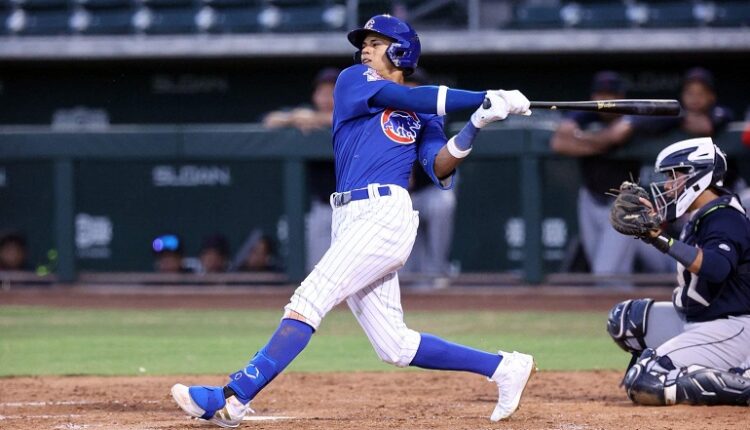 When it comes to minor league baseball, there are two opening days in my eyes. We already had the normal minor league opening day back in the 2nd week of April, but now we get opening day 2.0 as rookie leagues began play this week with plenty of prospects to watch. This is a glorious time of year as we get to hunt out the next pack of breakout prospects that burst onto the scene and shoot up prospect and dynasty rankings. Eddy Almaguer of Prospects Live said it best in a tweet the other day…

Assess your farm system and decide on 2-3 names that you’d be OK dropping to the waiver wire.

ACL/FCL/DSL kick off and there’ll be names popping up quickly. Don’t get caught in analysis paralysis and miss out.

So, today, I’m going to be discussing my top-10 prospects to watch in rookie ball that have major breakout potential this season. These aren’t completely unknown names, but depending on your league depth, all are great targets via trade or the waiver wire.

One of the big three in the 2021 international class, Cristian Hernandez really distanced himself from Wilman Diaz and Carlos Colmenarez last season. In 191 plate appearances in the Dominincan Summer League, Hernandez slashed .285/.398/.424 with five doubles, five home runs, and 21 steals. Stats are far from the entire picture when it comes to young hitters, but it was promising to see Hernandez get off to a quick start while Diaz and Colmenarez floundered a bit. Just as impressive was the patient approach Hernandez showed last season with a 15.7% walk rate while keeping his strikeout rate in check at 20.4%.

It didn’t go out, but this is a damn fine swing from #Cubs stud Cristian Hernandez. pic.twitter.com/aJQA64ZgQ6

Hernandez has shown a good feel for hitting with advanced zone awareness and pitch recognition for his age and has an exciting power/speed blend that could allow him to make a sizeable fantasy impact down the road. With his all-around skill-set, Hernandez has the potential to rise up to top-10 overall prospect status before the end of 2022.

When it came to the 2022 international signees, one player was head and shoulders above the rest. That man is Cristhian Vaquero. Others I’ve spoken to have thought the same thing as well. Vaquero has a frame that looks ready to slot into a corner outfield slot in Washington today, but unfortunately, that will have to wait a few years at least. But with his immense upside, it’s going to be worth the wait. At a listed 6’3/180, Vaquero is incredibly strong with plus speed and athleticism as well. He’s already flashed plus or better raw power with projection to add more as he matures physically. This is a player that I’m expecting to maintain his speed and athleticism moving forward as well. The tools are very loud here across the board offensively, giving Vaquero a decent chance to work his way up into the top-25 overall very soon.

In our most recent Top 30s update …
Cristhian Vaquero cracked his way into the @Nationals top 5 prospects 👀https://t.co/HBPkSayZuS pic.twitter.com/htiQIOdlYj

While a lot of the Kansas City prospect attention goes to the bigger names in the upper levels, Junior Marin is a name to watch closely this season and target in dynasty leagues before his value skyrockets. Debuting in the DSL last season, Marin slashed a ridiculous .380/.469/.696 with eight doubles, seven home runs, and five steals with nearly as many walks (16) as strikeouts (19) in his 111 plate appearances. Marin has an incredibly strong frame and is listed at 6’2/240 already.

One must always wonder how a frame like this will develop as he ages, but Marin has shown solid speed and athleticism for his size as well. But his potential at the plate is what really has me excited. Marin already shows plus or better raw power with the upside for more and could be an above-average or better pure hitter as well. If last season was the teaser, Marin could be in for a monster 2022 showing and finish as a top-50 prospect by the end of the season.

The Boston Red Sox farm system has made big gains over the last couple of seasons with the likes of Nick Yorke, Triston Casas, Brayan Bello and others rising to elite status with plenty more intriguing names in the lower levels. One of those exciting names is outfielder Miguel Bleis. Signed out of the Dominican Republic in January 2021, Bleis debuted in the DSL last season with moderate success, flashing an intriguing power/speed blend. Bleis is a plus runner with good range in center field and has plenty of bat speed and power projection left. While I’m not sure he’ll ever have the power to rival the three names above, Bleis could grow into above-average power to pair with that speed, making him very appealing in dynasty leagues.

We’ve reached out first pitcher on the list, albeit, one that was drafted as a two-way player last July. Bubba Chandler did debut last season as a hitter, but I’m more excited to see what he can do on the mound this season. The 6’3 right-hander has been up in the low to mid-90’s with his fastball and has shown good feel for spinning a breaking ball as well. He’ll also mix a serviceable changeup that’s shown solid traits. I’m not sure how long the two-way option is going to last, but Chandler has exciting potential on the mount with mid-rotation upside. Pittsburgh is proving to be a good player development organization as well ever since Ben Cherington arrived in town.

It’s been a long wait for the debut of Nick Bitsko, but that wait is almost over. The Rays drafted Bitsko 20th overall in the 2020 MLB amateur draft, but the electric right-hander underwent surgery to repair a torn labrum soon after, causing him to miss the entire 2021 season. Bitsko has a lot of positive aspects that you look for in a breakout pitching prospect. His velocity was already in the mid-90s before surgery with a high spin curveball that he showed good feel for headlining his four-pitch arsenal. Bitsko was one of the most inexperienced arms in the 2020 class but the raw tools and upside here are substantial, and he’s in one of the best pitching development organizations in baseball.

Prep righty Nick Bitsko up to 98.5 mph in a bullpen today per his Instagram https://t.co/9eobneQfv6 buzz in today’s mock that he could go in the top half of the first round https://t.co/fxOA5jwbHV pic.twitter.com/9qqASBhWMB

While his 2021 debut wasn’t as noteworthy as Cristian Hernandez’s, I’m intrigued to see if the toolsy Wilman Diaz can bounceback here in 2022. In 94 plate appearances last season, Diaz slashed just .235/.309/.353 with only one home run. It wasn’t all bad though as Diaz did have five doubles and a 9.6% walk rate. There’s a reason why Diaz was one of the big three in the 2021 J2 class and it’s too soon to drastically alter expectations after just 24 games in rookie ball. Diaz has displayed exciting power potential with plus bat speed and plenty of projection on the frame. With a strong start to the season, Diaz could easily re-enter top-100 consideration.

Another January 2021 international signing, Victor Acosta’s debut last season went quite well in the DSL. In 240 PA, Acosta slashed an impressive.285/.431/.484 slash line with 22 extra-base hits, five home runs, and 26 stolen bases. When signed, many scouts and evaluators considered Acosta one of the best pure hitters in the class and he showed that last season, also displaying an advanced approach with a 15.8% walk rate and 18.8% strikeout rate. How much power and speed he’ll have is still debatable, but with his contact skills, bat speed, and physical projection, 15-20 homers annually feels attainable with double-digit steals as well.

It seems like every season, there’s another breakout Seattle hitting prospect that comes out of nowhere and flies up prospect rankings. Last season, one of the prospects that emerged in Seattle’s system was outfielder Gabriel Gonzalez. In 221 PA, Gonzalez racked up 15 doubles, seven homers, and nine steals with a .287/.371/.521 slash line and .234 ISO. He did all this while limiting his strike out rate to 15.8% and drawing walks at a 9.5% clip. Gonzalez was listed at 5’10/165 when signed, but looks a bit bigger than that now. While there might not be any standout tools in the profile, Gonzalez profiles as a potential above-average offensive prospect across the board with top-100 potential by the end of the season.

First professional state side hit for @Mariners OF Gabriel Gonzalez. Love this kid. Team leader pumping up teammates, tons of energy and swag. Great approach and bat speed. Saw this pitch right out of his hand. Mariners fans going to love him#ProspectOne pic.twitter.com/c5m67lK8y4

Won-Bin Cho was a surprise international signing this January as many thought he wasn’t going to sign until the next signing period. Props to the Cardinals for getting it done as this could wind up as a steal for them longterm. Cho’s left-handed raw power already is turning heads his left-handed swing generates plenty of natural loft as well. He’s shown a knack for driving the ball in the air with authority, especially to his pull side, and is at least an average runner as well, maybe even above-average. He’s a bit of a wild card, but one with exciting offensive potential that could really shoot up rankings with a strong showing in rookie ball this season.