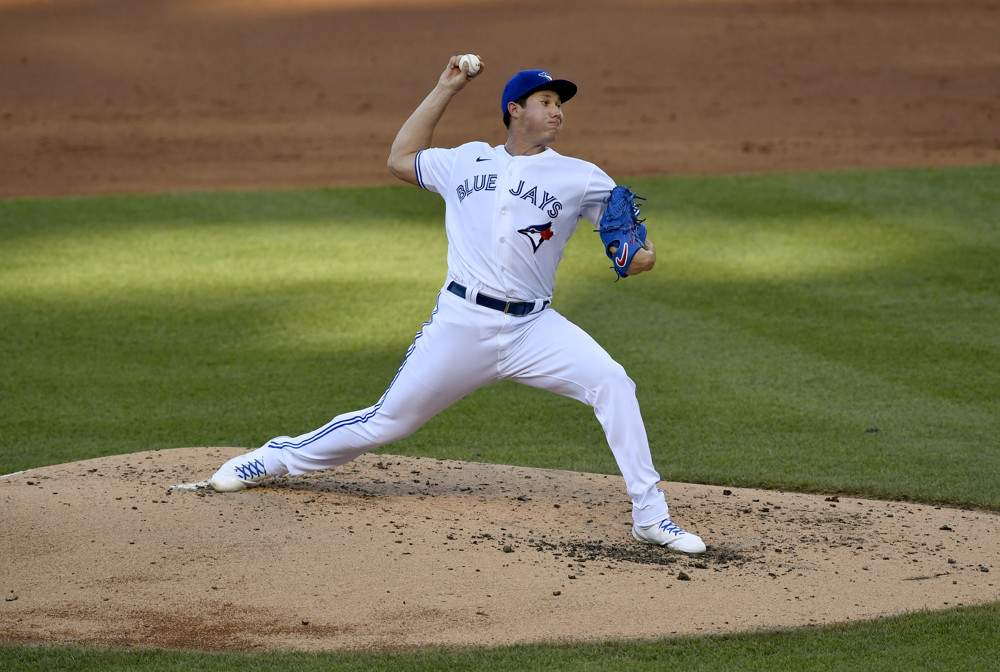 This isn’t something I thought I’d have to include. However, I’ve been getting many tweets saying something like “Sixto was dropped in my league, should I grab him and stash him?”

Yes. Yes. One million times yes. Sixto was a near top-100 pick this year and excelled during his first Major League stint last season. Sixto needs to be rostered in all leagues unless he experiences a setback in his recovery. As of now, it’s sounding like a May return.

All indications are that Logan Gilbert is going to be up very early this season. It likely won’t be next week when teams can accrue an extra year of service time, as Gilbert isn’t ready, but it would shock me if he’s not up by the end of May. This is the type of arm that can make a significant impact right away and put up a season like Ian Anderson or Sixto Sánchez did last season.

Gilbert features four legit Major League offerings with an easy plus fastball and three secondaries that can flash plus in any given outing. Add in above-average command and control, and Gilbert has the tools to make a more seamless transition to the Major Leagues than most. Through 26 minor league starts, Gilbert posted a stellar 2.13 ERA, 0.95 WHIP, 6.3% walk rate, and 31.7% strikeout rate, giving us a glimpse of the type of upside he possesses. The time is now to stash Gilbert.

If you want to call MacKenzie Gore 1B to Logan Gilbert’s 1A, that’s fine. As with Gilbert, Gore should be up early this season and the injury to Adrian Morejon helps create an easier path to MLB starts presently. However, Dinelson Lamet is close to returning, so that opportunity might have to wait a bit. It’s also very possible that the Padres use Gore out of the bullpen initially until there’s a rotation spot open for him to slot into. I’m sure that doesn’t sound appealing for fantasy purposes, but it’s not like the Padres rotation have been Iron Men during their Major League careers. Once a spot does open up, Gore will likely be the one receiving the opportunity, which is why he needs to be stashed now if he isn’t already.

The velocity dips throughout 2020 were concerning, but Gore remains the #1 pitching prospect in baseball in my eyes with four potential plus pitches and above-average to plus command and control as well. The potential future frontline arm has racked up a 2.56 ERA, 1.01 WHIP, 7.3% walk rate, and 33.6% strikeout rate over his 43 professional starts, finishing with a brief Double-A stint to finish 2019.

As we entered 2021 draft season, Nate Pearson was a popular late-round target of mine. The main reason for that is his elite strikeout upside thanks to two 70-grade pitches in his fastball and slider along with a serviceable curveball and changeup that each flash above-average at times. This arsenal plus solid command and control allowed Pearson to post a stellar 31.1% strikeout rate in the minors over his 123.1 innings.

The knock on Pearson has been his durability in the past and him dealing with a groin injury at the moment is less than ideal, but this is of the most electric pitching prospects in baseball that has the ability to produce as a top-50 starter once he makes his debut. That debut should come by the end of May, but the Blue Jays have been playing it cautiously with their prized arm.

As a Red Sox fan, I can say with 100% confidence that Tanner Houck is one of the five best pitchers on the team. And even though he looked good in spring training and through the start of the season, Boston sent him back to the alternate site when they activated Eduardo Rodriguez. But I have a feeling he won’t be down for long. This Red Sox rotation is anything but a sure thing when it comes to staying on the mound. Nate Eovaldi hasn’t eclipsed 150 innings since 2015, Garrett Richards spends more time on the IL than the mound, and Eduardo Rodriguez has dealt with a myriad of issues over the last couple of years.

When the Sox need another starter, Houck will likely be the name they call on. Houck’s slider is already one of the best in baseball with Chris Sale movement from the opposite side and a 50+% whiff rate. He’ll likely need to use/refine his splitter more to pair with the slider, four-seamer, and sinker, but Houck has shown the ability to miss bats at a high clip already. If you have deeper benches, I’d look to stash Houck.

The Phillies recently brought up Spencer Howard for a doubleheader earlier this week but that’s all it was. it’s unfortunate as Howard is one of the top pitching prospects in the game with the ceiling of a #2 starter down the road. Howard possesses three above-average to plus offerings in his fastball, changeup, and curveball, and the slider flashes as well. On top of that, Howard has shown the ability to command his entire arsenal and pound the strike zone with regularity, posting a 8.6% walk rate to go along with a 32.8% strikeout rate before debuting with Philadelphia last season. It has been rumored that the Phillies might not use him as a full-time starter this season which would cap his fantasy value a bit, but Howard’s upside makes him worth the gamble once he’s up.

While Casey Mize and Tarik Skubal graduate from prospect status, Matt Manning still is waiting for his chance to make his Major League debut. Mize and Skubal are very good pitchers in their own right, but Manning is the one I’m the most excited about. Manning has shown two plus pitches in his mid-90’s fastball and big hammer curveball while making solid gains with his changeup over the last year or two. The pitch remains inconsistent but flashes above-average with good movement when Manning is throwing it well.

There might not be a spot open for Manning at the moment, but it’s only a matter of time. Michael Fulmer hasn’t been durable or effective since 2018 and Jose Urena is just plain bad. The Tigers likely won’t be contending this year, or anytime soon, so I’m expecting they give a long look at Manning this year. And like with Pearson, Manning’s ability to miss bats gives him immediate fantasy relevance.

Upside alone causes Luis Patiño to make this list, but how the Rays use him this season is anyone’s guess. Unfortunately, it’s not likely to be in a traditional starter’s role, but Patiño could be used as an opener pitching 2-3 inning stints every several days. That leaves him more in 12+ team territory and not a shallow league option. However, he’s still worth monitoring as a high upside arm with elite strikeout upside thanks to a dynamic fastball/slider combination and above-average changeup to offset them.

Consistently commanding his arsenal has been an issue for Patiño though and his walk rate has trended the wrong way since 2018. For that reason, the ratios likely won’t be stellar out of the gate, but somewhere in the vicinity of 4.00/1.25 is realistic this season along with a strikeout rate above 25%.

I’ve been more than vocal about my concerns about Deivi Garcia long-term. But at the same time, I have also said I believe he can find fantasy success in the short-term if the Yankees give him a chance to start this season. While his command and control can sometimes get him in trouble, one thing Garcia has done exceptionally well in the minors is rack up the strikeouts.

In his 293.2 career innings in the minors, Garcia struck out 34.5% of the batters he faced and never dropped below 31.6% in any one season. The Yankees rotation is talented but incredibly shaky when it comes to health, making a high likelihood that Garcia is needed to step into the rotation at some point this season, likely early on. While I’m including Garcia on this list, he’s not one I’d break the bank for in weekly FAAB leagues. He’s more of a 14+ team target.

Over the last few years, the Royals have accumulated several high-end pitchers through the draft, including big, lanky left-hander, Daniel Lynch. The 2018 1st rounder has excelled across his first 32 professional starts, posting a 2.50 ERA, 1.19 WHIP, 6.2% walk rate, and 26.2% strikeout rate. That strikeout rate is already impressive, but I think there’s a bit more upside in that department too with his big fastball/slider combination along with an average to above-average changeup and curveball. The Royals showed in 2020 that they’re not afraid to promote their guys aggressively and Lynch should be receiving that call sometime around mid-season.

If you’re looking more at proximity, Daulton Jefferies would be a bit higher on this list. The 25-year-old was being considered for a rotation spot in spring training, but the spot ultimately went to southpaw Cole Irvin who currently sports a 7.45 ERA through two starts. Irvin is also the 3rd lefty in Oakland’s rotation. The leash shouldn’t be long for Irvin with Jefferies the likely replacement if Oakland decides to make the switch. Jefferies might not possess the upside of many of the names above him, but he might have the best command and control on the entire list. Both Jefferies’ command and control grade as plus or better and were very evident in his 3.0% walk rate in the minors.