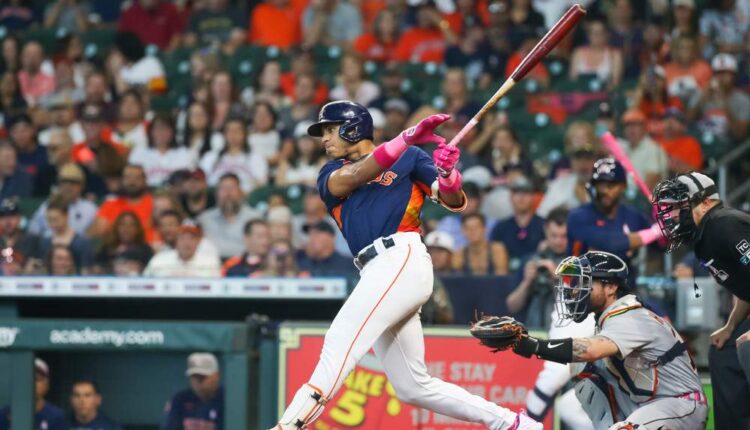 In the blink of an eye, we’re more than a month into the minor league season. My first in-season Top-400 update every season is one of the most important updates of the season. This is when the newest batch of rising and breakout prospects present themselves for dynasty managers and prospect hounds to fight over. This season has been no different with plenty of prospects on the rise in dynasty leagues that are off to hot starts to the season or are showing improvements in certain areas. So many that I’m going to break this up into three articles, starting with infielders today.

I’ve broken this down into four sections depending on where these prospects landed in my top-400 rankings. Leading the way is a shortstop that is one of the early favorites for American League rookie of the year.

Prospects on the Rise: Infielders

Prospects on the Rise: Top-100

Jeremy Pena (SS – HOU): With Correa gone, Jeremy Pena has seized the opportunity and ran away with the starting shortstop gig in Houston. Pena showed glimpses of his offensive talent in the minors when he was actually on the field and his right-handed swing fits well in that ballpark. In his first 28 games, Pena has racked up six homers and a steal, and profiles as a 25/10 player longterm with plenty of R & RBI in that loaded Houston lineup. We could eventually be looking at a borderline top-50 dynasty player.

Jeremy Peña is now tied first with 17 RBI on the Astros pic.twitter.com/2rmafGhVva

Gunnar Henderson (SS – BAL): The Baltimore organization already had four top-50 prospects in Grayson Rodriguez, Adley Rutschman, Coby Mayo, and Colton Cowser, and now Gunnar Henderson makes it five. Henderson has already swiped 10 bags in Double-A this season, bringing his career total to 28 in 160 games with an 84.8% success rate. He’s been equally as impressive at the plate as well with a .321/.465/.524 slash line, four homers, and a .421 wOBA. While he doesn’t stand out in any one tool, Henderson could be above-average across the board offensively and flirt with 20/20 seasons in Camden Yards.

Ezequiel Tovar (SS – COL): This breakout actually began in 2021 with 15 homers and 24 steals, but Tovar is proving that his performance last season was no fluke and has made additional strides this season. Tovar continues to display an above-average to plus hit tool with plus speed, and continues to improve in the power department. So far this season, Tovar already has cranked six homers in 27 games with a .610 SLG and .267 ISO. If he’s able to maintain these power gains moving forward, he’ll be well inside my top-50 overall by mid-season.

Ezequiel Tovar is on FIRE

His 3⃣rd home run in the last 4⃣ days 🔥 pic.twitter.com/0BsLN46yxF

Adael Amador (SS – COL): Tovar isn’t the only Rockies middle infield prospect rising up rankings right now. Tovar is as well, excelling in Lo-A. Through his first 118 plate appearances, Amador is slashing .326/.441/.568 with five doubles, six home runs, and three steals with more walks (21) than strikeouts (13). Up until now, Amador has never been thought of as a power source, but he’s added bulk since being signed while maintaining his contact skills and approach as well. The ceiling isn’t quite as high here as it is with Tovar, but Amador could be top-50 overall by EOS if this continues.

Prospects on the Rise: Top-200

Masyn Winn (SS – STL): The two-way dream is over, but that’s probably for the best when you see what Masyn Winn has been doing offensively this season. After a lackluster showing in 2021, albeit, with a ton of steals, Winn has improved drastically this season and currently sports a .361/.430/.581 slash line with 11 extra-base hits and 11 steals without being caught once. He’s now swiped 43 bags with an 89.6% success rate in 121 minor league cames and the contact rate has been much better this season. Winn moved up considerably in this update and will move up even further if he shows additional power moving forward.

Connor Norby (2B – BAL): When he was drafted, Norby was considered a plus and advanced hitter but with a lower power/speed ceiling. However, that power has ticked up this season with Norby picking up five home runs in 23 games with a .506 SLG and .242 ISO. If he’s more of a 55-grade power bat that can get into the 20-homer range with 5-10 steals and a high AVG, Norby is going to find himself much higher on prospect rankings as the season progresses.

O’s 2B prospect Connor Norby smashes stuff in his hot zone. This is his 2nd hit of the day as he piles up the knocks #offense #skills #hitter pic.twitter.com/hzI9n3KF2x

Edwin Arroyo (SS – SEA): So far, Edwin Arroyo is looking like one of the biggest FYPD steals from this past draft. The second round pick is showing a solid power/speed blend with five homers and six steals in his first 25 games and shows an advanced feel at the plate as well. While he might not excel in any one area, Arroyo could be above-average across the board offensively and has top-100 potential by EOS.

Shea Langeliers (C – OAK): Remember when Shea Langeliers was considered an elite defender with a so-so bat? Well, now that bat is sporting a .317/.413/.673 slash line and 11 home runs in 121 Triple-A plate appearances this season. Langeliers has also trimmed his strikeout rate and improved an already solid walk rate. With his defensive skills, Langeliers just needed to be adequate offensively to make it to the Majors, and it looks like he’ll be much more than adequate at the plate.

Alex Binelas (1B/3B – BOS): Binelas having a down 2021 collegiate season was a blessing in disguise as the Red Sox were able to acquire him along with David Hamilton in the Hunter Renfroe deal. All he’s done as a pro is rake, showcasing his plus or better power and decent contact skills. He’s probably not more than a .260 hitter, but that could come with 25+ homers and a handful of steals as well.

Prospects on the Rise: Top-300

Michael Massey (2B – KCR): Massey performed well last season too but the old “age versus level” narrative kept his value from rising higher than it did. Well, now Massey is excelling in Double-A and looks even better than he did in 2021 with five home runs, three steals, and a .330/.380/.547. There’s a solid all-around offensive skillset here that should lead to solid fantasy value.

Michael Massey is 3-3 with his 8th double tonight for NWA. He’s now batting .320 with a .901 OPS in his first month at AA. pic.twitter.com/WnKYkpvhKq

Christian Encarnacion-Strand (1B – MIN): CES has been slumping a bit here in May, but his April performance was incredible with five homers, three steals, and a .410 AVG. He broke out in his final collegiate season and hasn’t stopped hitting since with a .372 AVG in his first 48 professional games. As with Ramos, 55-hit, 55-power is in the range of outcomes with maybe a handful of steals sprinkled in as well.

Cesar Prieto (SS – BAL): Prieto was well-regarded for his hit tool when Baltimore signed him last year and he’s already showing more power than anticipated. We need to pump the breaks a bit as he’s 23 in Hi-A, but seven home runs, a .702 SLG, and a .374 ISO are certainly notable. If the power is for real, Prieto should continue to rise up prospect rankings.

Warming Bernabel (3B – COL): There’s no doubting that Bernabel is certainly warming up this season. Sorry, couldn’t resist, it was placed on a tee for me. When you combine 2021 and 2022, Bernabel has 11 homers and 17 steals in 291 PA and currently has a .333/.414/.559 slash line this season in Lo-A. Take the SB total with a grain of salt, but Bernabel could be above-average in the hit tool and power departments while adding 5-10 steals as well. You can go ahead and enter your “The Rockies hate prospects and he won’t debut until 2032” comments here.

Jacob Amaya (SS – LAD): After a season where he hit just .216, Jacob Amaya has turned up the heat in Double-A with a .342/.469/.776 slash line with seven homers, two steals, and more walks than strikeouts. He’s thoroughly blocked in LA and won’t debut until 2023 anyway, but it’s worth seeing if this is more than just a hot streak.

David Hamilton (MI/OF – BOS): Listen, I’m still unsure if he’s a full-time MLB starter, but the skills and performance are worth targeting him to find out. Hamilton has shown elite speed for Double-A Portland with solid contact skills and a little pop. His ability to play second, shortstop, and center field definitely helps his case.

Stolen base for David Hamilton who the #RedSox acquired in the Renfroe deal.

He's been wreaking havoc at the plate and on the bases in this series. 2nd SB today. pic.twitter.com/LGqIOjFReV

Prospects on the Rise: Top-400

Werner Blakely (SS – LAA): Blakely was one of my favorite FYPD targets in the 2020 class due to his power/speed upside and physical projection. However, he was very raw at the plate and that showed in 2021. However, Blakely has made major strides as a hitter this season with his approach and contact skills while still showing that power/speed blend. He could be a top-100 prospect by EOS.

Colt Keith (3B – DET): We’re still waiting for his over the fence power to materialize, but Colt Keith is cranking plenty of doubles right now and showing above-average contact skills as well. Through 26 games in Hi-A, Keith has a .327/.390/.542 slash line with10 doubles, three homers, two steals, and a 78.5% contact rate. His stock is going to rise even more once some of those homers begin clearing the outfield fence.

Kody Clemens (2B – DET: The Rocket’s son has been hitting some rockets this season in Triple-A with 15 extra-base hits and six homers in 29 games with a .289/.307/.546 slash line. Clemens makes this list and rose up my rankings a bit due to his performance, but I wonder if he’s going to hit enough to be a big-league regular. Might be a good time to sell high in dynasty.

Matthew Lugo (MI – BOS): His 2021 season wasn’t anything to write home about, but Matthre Lugo has gotten off to a hot start to 2022 in Hi-A Greenville. Lugo has already racked up 14 extra-base hits, four homers, and five steals in 24 games with a .333/.385/.576 slash line. The approach remains a bit aggressive, but the contact rate of 82.8% will certainly play and Lugo has at least 50-grade power and speed, maybe 55-grade.

Leandro Cedeno (1B – ARI): Last season, Leandro Cedeno was overly aggressive in Hi-A and it limited his overall production. But fast forward to 2022 and Cedeno has improved both his walk and strikeout rates and the power has really ticked up with seven homers in 92 plate appearances. More patience has led to more contact as well with an 82.1% contact rate. This is more of a deep league target, but the offensive potential is intriguing.