Carlos Santana signed a three-year, $60 million deal with the Phillies, as reported by Jon Heyman mid-day Friday. The 31-year-old veteran joins a young core of position players on a club with future money to spend. Santana will play the majority of his time at first base, likely pushing Rhys Hoskins into left field full time. Hitting in the heart of the Philadelphia lineup, Santana will look to continue his very solid approach at the plate. Known for his sturdy on-base skills, Santana has a career .365 OBP, including six consecutive seasons with an OBP above .360.

Santana also doesn’t strike out much, which will be a refreshing sight for Phillies coaches. Last year the Phillies were one of only 10 teams to strike out more than 1,400 times, and of those 10 teams, the Phillies had the fewest number of home runs (174). At first glance, you might not expect Santana and his 23 home runs to help them much in the power category. However, as we look a little deeper, we see that Santana hit 37 doubles in 2017. With 81 of his games now coming in the friendly confines of Citizens Bank Park, some of those doubles could turn into home runs. Take a look at the image below, which shows the ballpark overlay using Santana’s hit data from 2017 in his new home ballpark. Last year those yellow dots were doubles,  and the pink dots were outs … maybe not anymore. 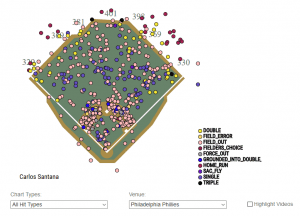 As Santana stands to improve his home run total, he still may be in jeopardy of losing some other counting stats. For example, Santana may struggle to score runs, as the Phillies ranked 27th in runs scored in 2017. He may make up some value in the RBI department, as he should bat third or fourth most nights. That said, his RBI total will be closely tied to the ability of players like J.P. Crawford, Odubel Herrera, Nick Williams to get on base. The best-case scenario for Santana and his fantasy value is for the Phillies to either continue to spend, or for one or more of the Phillies’ young players to have a breakout similar to the one Hoskins had in 2017.