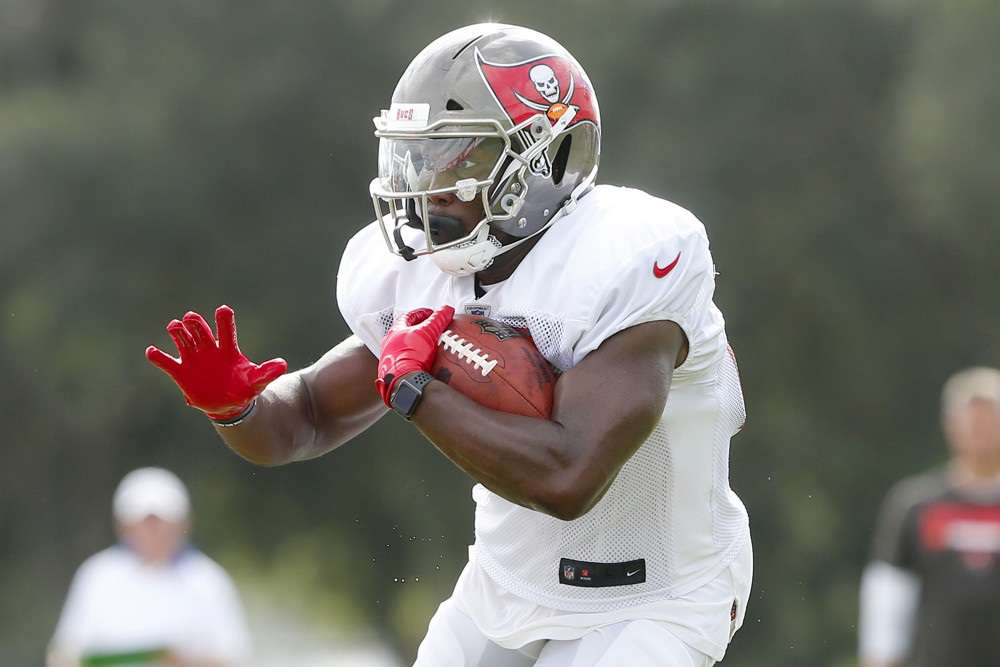 I have been focusing primarily on wide receiver values as of late because running back values are few and far between this draft season. Backs are being scooped up in drafts at a furious pace. In an average standard league draft, fifteen running backs are gone before the end of the second round. By the end of Round Six, an average of thirty running backs are off the board. Essentially, almost every NFL team’s starting running back is out of play by the middle rounds in any draft. And then there’s Peyton Barber of the Tampa Bay Buccaneers.

Peyton Barber took over as the starting running back in Tampa Bay late last season. Over his final six games, he averaged a very respectable 9.67 fantasy points per game. For reference, Frank Gore averaged 9.04 fantasy points per game last season and finished the year as the overall RB18. Barber had more top-12 finishes in that six-game season-ending stretch (three) than Gore had all season (two). Again, it’s worth noting that this year’s RB18 is being drafted in the third round.

Barber’s stats may not jump off the page, but he was a solid contributor when given the opportunity last season. Despite not receiving a goal-line carry until Week 12, Barber finished tied for 12th in the NFL in goal-line carries last season. His touchdown rate in those situations was better than six of the 11 players who had more goal-line rushes than he had. Barber also flashed good agility and playmaking ability last season. He finished 14th in yards created per carry and 17th in juke rate.

Despite his strong finish last season, Barber has been an afterthought in the minds of most this offseason, particularly following the Buccaneers’ selection of Ronald Jones out of USC in the second round of the 2018 NFL Draft. But being overlooked is nothing new for the player who went undrafted out of Auburn in 2016. Barber is ceding nothing to Jones, and so far, has outplayed his would-be competition. Barber has outgained Jones 53-11 on the ground this preseason despite two fewer carries.

DOUG MARTIN?!? SERIOUSLY?!? In the four games Barber started in Tampa Bay last year (when he replaced… who was that again? Oh yeah – Doug Martin!) he averaged over four yards per carry three times. Doug Martin has averaged at least four yards per rush in a game twice in the last two years!

Not included in the list above is Jones, who most expected to win the starting gig in camp rather easily. Jones has an ADP in the sixth round and is still curiously being selected as the 25th running back off the board in drafts. In addition to Barber outperforming Jones on the practice field and in game action thus far in the preseason, recent comments from the coaching staff in Tampa Bay also clearly favoring the incumbent. Here is a quote from Bucs’ head coach Dirk Koetter regarding Barber this week:

“He’s doing everything he should be doing right now, and I think if we went out there and gave it to Peyton 20 times, we’d like what he does.”

And here is a quote from running backs coach Tim Spencer about Jones:

“In college, there’s probably a reason they only threw to him 17 times.”

In addition to everything mentioned above, there are a couple of other factors that should, at the very least, raise Barber’s floor. First is the three-game suspension of quarterback Jameis Winston. Ryan Fitzpatrick will replace Winston for those three games. Koetter would be wise to run the football as much as possible during this season-opening stretch. Second is the placement of passing-down specialist Charles Sims on season-ending injured reserve earlier this week. This move has gone under the radar because Sims does not have much standalone value in fantasy, but it will also be a boon to Barber’s success. We know Jones won’t be in on many passing downs, and Barber finished second behind Sims among Bucs’ backs in catches last year.

I already think the current ADP of the backfield in Tampa Bay is laughable given what has transpired in recent weeks and I would flip-flop Barber and Jones without a moment’s hesitation. In my opinion, the injury to Sims and the suspension to Winston make Peyton Barber a Flex play at worst to begin the season. As such, I would not have a problem grabbing any time after the fifth round. Those who can acquire him before pick 100 are still getting a nice value, and drafters who can grab him at or around his current ADP are getting an absolute steal.