I picked Patrick Mahomes as the first QB in a Mock Draft. I made a mistake. 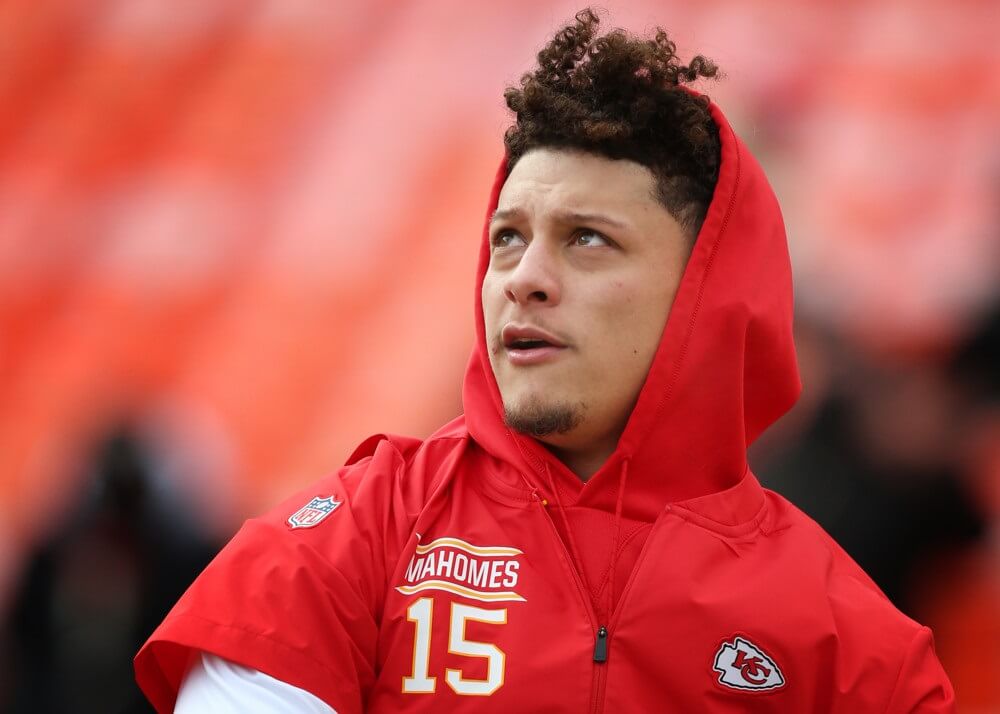 This week, we held a SuperFlex Staff Fantasy Football Mock Draft at FanTrax that will be published soon on the site. I was allotted the fourth overall pick. Se here is your spoiler alert: I was the first owner to take a QB and I went with what seemed like the obvious pick; last year’s No. 1 QB, Patrick Mahomes.

The Plan to Take Patrick Mahomes

Sitting where I was before the draft started, I knew I might have an opportunity to take one of the top QBs, but I figured there was a chance one of the two I really wanted the most, Patrick Mahomes or Andrew Luck, could very well be gone by then, What I always do is queue up the amount of players commensurate to my first round draft slot. So since I was drafting fourth, I started to queue up my Top Four. I really was leaning QB, so I also queued up Matt Ryan and Ben Roethlisberger. If Mahomes, Luck and Ryan all went before my pick, I was not fully comfortable with taking Roethlisberger that early since he did lose Antonio Brown. So I strongly considered opting for a RB if three QBs were taken ahead of me. I considered it unlikely, but you have to be prepared for any possible scenario. You can never fully predict what happens ahead of you. Just be prepared for the worst case scenario in any round.

I was not surprised at all to see RBs go with the first three selections, though. This was an expert mock after all, and these types are always willing to wait on a QB, and four points were rewarded for a TD pass rather than six. But now I had a shot to get the best QB on the board in what is essentially a two-QB league. I knew the position I wanted to go after. But making that first pick was not easy.

Should it have been simply a reflex action to take Patrick Mahomes? Last year’s totals indicate he was the surefire pick. In 2018, Mahomes soared above any other player at his position with 417 total points. That is 63 points ahead of Ryan, who was second. He averaged 26.1 Fantasy Points Per Game, four points per game ahead of Ryan, who was also second in that category.

But any respectable Fantasy Football analyst looks forward, and not ahead. I already see reasons Mahomes won’t finish so far ahead of the QB pack in 2019. Any average fantasy player can see danger is lying ahead. There is a very strong chance that Mahomes may lose his top playmaker, Tyreek Hill, for an undetermined amount of time. Plus, after his amazing first season, defensive coordinators are spending a full offseason searching for ways they can expose him more. Mahomes may have a tougher time dominating defenses the way he did in his first season as a starter. Opponents do make adjustments from year to year.

Mahomes will still have Travis Kelce, but without Hill, his receiving corps obviously becomes much less fearsome. Sammy Watkins would become his No. 1 wideout. Watkins always had the talent level to be considered a premier wideout, but injuries have always derailed his production. Mahomes cannot depend on Watkins to stay healthy.

The Chiefs apparently drafted dynamic rookie Mecole Hardman to replace Hill if needed, but it’s a lot to ask for a new pro WR to take on the role of one of the foremost WRs in the game. Hardman will have his moments for sure, but Mahomes may not be able to rely on him heavily right away. That is just not realistic.

If Watkins goes down again, the Chiefs receiving crew is going to look mighty thin. After Watkins and Hardman, K.C. has the likes of DeMarcus Robinson and no one else who is proven. Very quickly, the current group of Kansas City WRs could look like the mediocre contingents of the past. I’m sure Jeremy Maclin is available if they want him.

The Chiefs could choose to dip into what is left in free agency, which could bring them a Michael Crabtree or Jermaine Kearse type. That could improve the outlook in a minor way, but the odds are against Mahomes being able to repeat as the Top QB without Hill.

To his credit, Mahomes has already shown he can often get the ball to anyone who is simply breathing. Chris Conley caught five TDs from Mahomes last year, and Robinson caught four TDs. But there is just no way to replace Hill’s 1.479 yards and 12 TDs and Mahomes is destined to take a hit in potential fantasy production when Hill is disciplined by the league or jettisoned by the Chiefs. By his own ability alone, he should remain at least a Top 5 Fantasy QB. But regression will hit in the form of no Tyreek Hill.

Meanwhile, Andrew Luck, who finished fifth with 327.1 points and 20.4 FFPG, sixth in that category, seems poised to leap up the ladder and contend for the top spot overall at QB. After a super comeback season, Luck is surrounded by more notable playmakers than ever before, and his group of targets is deeper in quality than any other top Fantasy QB you can name. The Colts have the best combination of a superstar QB and a depth chart full of playmakers in the passing game.

Sure, Luck gets T.Y. Hilton back, and that is great on its own. He also has a pair of outstanding TEs returning, and defenses will be more overworked if Eric Ebron and Jack Doyle can stay on the field at the same time this season. They may cut into each other’s fantasy totals if Doyle stays healthy, but their dual presence makes Luck even more effective and dangerous.

We also cannot overlook the acquisition of former Panther Devin Funchess, who was an underachiever in Carolina, but he now can be a fine role player for Luck. He should fit in well as the big WR target Luck was lacking, and will get important looks on key passing downs and in the goal line area. Funchess is getting a big QB upgrade himself by leaving Carolina for Indianapolis.

The Colts also drafted electric rookie Parris Campbell, who may be boom-or-bust as a fantasy player in his rookie year, but he gives Luck another significant weapon for defenses to fear right away. Add in second-year RB Nyheim Hines as a pass-catching threat out of the backfield and you can see what the Colts have assembled for Luck: A group of pass-catchers that can all play distinctive roles in various situations. Luck can make every throw these days, and now he has the right guys to be at the other end of them no matter where he looks on the field.

So in retrospect, maybe I made a mistake taking Mahomes as the first QB in the mock draft. I approach mocks as I do real drafts, but I believe I do have a regret. Upon further review, maybe I should have taken Luck first.

So far, according to FantasyPros cumulative Average Draft Positions, Mahomes is being drafted 15th overall, while Luck is going 51st overall. I just cannot recommend taking Mahomes in the second round with the Hill situation looming. I will gladly wait for Luck a few rounds later. Usually I do not personally take a QB until the sixth round. If Luck does drop to that point, I am seizing his rights.

It’s not 2018 anymore, I’m looking ahead to 2019. If you draft Patrick Mahomes too early, you will still get a very good Fantasy QB. But you may not get the best one of the upcoming season. So let someone else do it, and wait for Andrew Luck or another top QB a few rounds later.