Pablo Lopez Changing It Up In 2020 – Fantasy Baseball Deep Dive 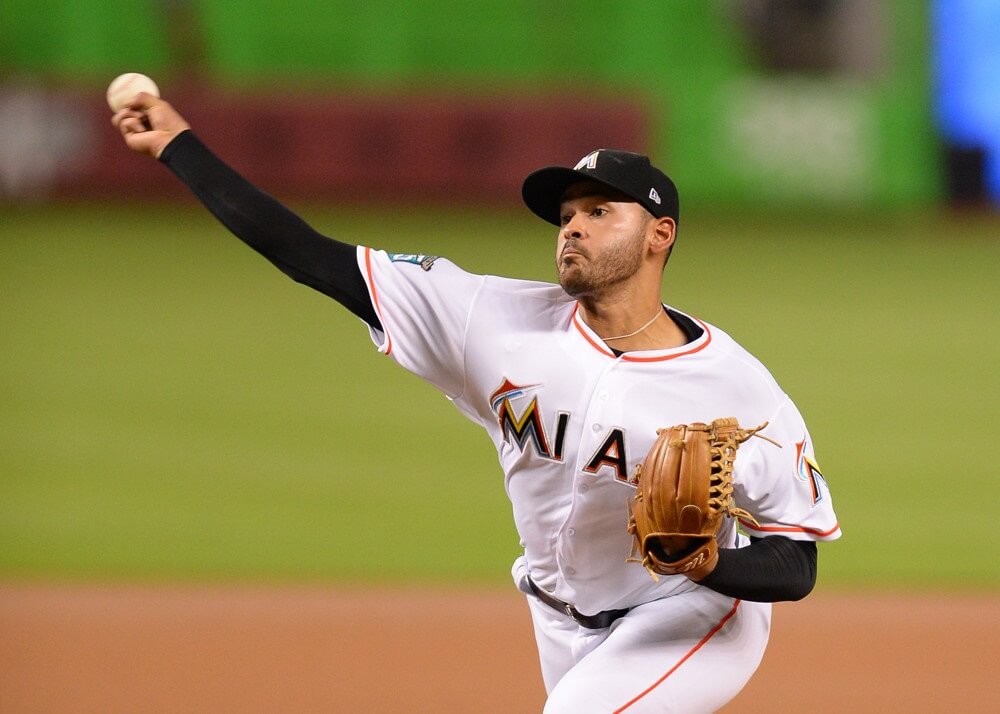 Sometimes there’s a narrative for pitchers that goes like this – if only they threw their best pitch more often. Well, Pablo Lopez increased the usage of his best pitch and finished with a career-best 3.61 ERA in the shortened 2020 season. With Pablo Lopez changing it up, it appears to net positive results. Thus, we’ll dive into the changes Lopez made while also analyzing what to expect moving forward in 2021.

Pablo Lopez Changing It Up

When glancing at his batted ball profile, Lopez traded a lowered 28.6% fly-ball rate for an increased 52.2% ground ball rate. His line drive and fly ball rate dropped 2-3% while his ground ball rate increased by about 4.5%. I mentioned the lowered HR/9, and his 8.7% HR/FB rate also dropped from a 14.6% HR/FB in 2019. One of the reasons for a lower 2020 ERA involves the drop in home run rate.

Overall, we notice hitters made less contact overall and inside the zone while hitters made slightly more contact outside the zone. His O-Swing% and Z-Swing% also increased, and maybe that contributed to the increased strikeout rate as well. Lopez also increased his first-pitch strike rate and tossed fewer pitches inside the zone. Overall, take this data with a grain of salt since he pitched a career-high 111.1 innings in 2019 compared to 57.1 innings in 2020.

With Pablo Lopez changing it up, let’s look at his pitch mix. Lopez used a mixture of five pitches with the four-seam fastball, changeup, and sinker as the top three options. He utilized his cutter (8.4%) and curveball (7%) less often. The most notable change, hence the title “Pablo Lopez Changing it Up,” involves the increased changeup usage.

When looking at the pitch mix usage, Lopez lowered his four-seam fastball usage and increased the changeup usage since that’s his best pitch. With the decrease in four-seam fastball usage, the results on his four-seamers also improved in terms of whiff percentage, xBA, xSLG, and xwOBA compared to 2019. In doing so, that contributed to the improved strikeout rate and ERA for Lopez. With that, let’s look at the filthy changeup.

Lopez increased the changeup usage from 22% in 2019 to 29.9% in 2020, and thus the improved results across the board. His swinging-strike rate and whiff rate also increased while the batting average, slugging percentage, and wOBA allowed dropped. The increased swings and misses paired with the lowered home run rates again contributed to the improved ratios and strikeout rate.

The visual above showed the lowered expected wOBA in 2020 compared to 2019, which made sense considering the improved ratios and results across the board. Again, since Lopez used his best pitch (changeup) more often, he displayed better results. Hopefully, we continue to see Pablo Lopez changing it up.

Overall, Pablo Lopez’s Statcast data looked interestingly consistent over the past three seasons. In 2020, he allowed an 85.7 mph average exit velocity (90th percentile), 32.3% hard-hit rate (79th percentile), and a .270 xwOBA (79th percentile). Since he consistently allowed a similar quality of contact and his Statcast gradually improved, it’s another positive attribute for Lopez. In 2018 and 2020, Lopez allowed an average exit velocity that ranked in the top 10% of the league. The table below displays the improvements in his Statcast data across the board.

All of the Statcast data above provide hope for Pablo Lopez moving forward in 2020. His expected stats decreased across the board with a .220 xBA, .342 xSLG, .270 wxOBA, and 3.61 xERA. Positives signs with Pablo Lopez changing it up in the 2020 season.

2021 Outlook – Pablo Lopez Changing It Up

Pablo Lopez was a value in drafts with his 371.42 NFBC ADP with a high pick of 196 and a low pick of 483. We expect his ADP to rise in 2021 fantasy baseball drafts with Pablo Lopez changing it up and increasing his changeup usage. However, Lopez should be a draft value in 2021 since he tends to fly under the radar.

Hopefully, we see Pablo Lopez changing it up and utilizing his best pitch more often in 2021. Amongst starting pitchers that threw at least 50 innings in 2020, Pablo Lopez ranks 15th with a 3.09 FIP in between Sonny Gray, Dallas Keuchel, Kevin Gausman, and Max Fried. Lopez likely falls closer to Keuchel and Gausman than Gray and Fried, but still good company and a starting pitcher in the later rounds to target in 2021 redraft leagues. Check out where Fantrax writer Jake Devereaux ranked Pablo Lopez in his top-100 starting pitcher rankings for 2021.

Pablo Lopez starts the first postseason appearance of his career by getting Acuña on 3 pitches pic.twitter.com/40S5WQskm9