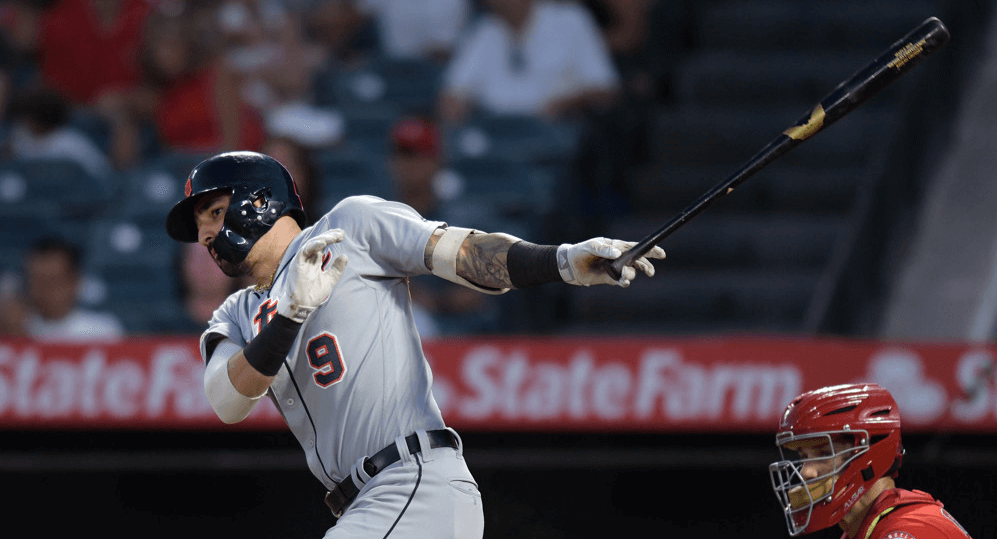 Entering 2019 I was a fan of Nicholas Castellanos. He didn’t get off to a particularly great start. However, since the mid-season trade to the Chicago Cubs, Castellanos has been nothing short of great. We expected a lot more of this good version of Castellanos entering the year than the bad we got at the beginning.

What has changed? I will be diving into the Nicholas Castellanos of old and new to see what’s different and offer a 2020 outlook at the end as well. Let’s get to it.

To say Nicholas Castellanos was bad in the beginning of the season isn’t completely true. He was just underperforming and hitting for an empty batting average. He was viewed as a solid four-category contributor coming into the year but there were some red flags. Most of the red flags were due to the team context. More specifically the lack of a supporting cast and lineup support. Unfortunately, that lack of supporting cast may have affected the numbers prior to the trade.

Prior to the July 31 trade, he had 11 home runs, 57 runs, 37 RBI and a triple slash of .273/.328/.462. Due to the apparent juiced ball and increased home run totals, the lackluster power numbers had a lot of fantasy owners dropping or trading away Castellanos for pennies on the dollar. He wasn’t bad but he wasn’t offering much outside of the batting average numbers and in today’s game, empty batting average is hard to hold on to.

He managed to still keep a slightly above average wRC+ of 106. Other than the lack of power output, Castellanos was kind of just being himself.

Since the trade, it’s been all arrows pointing up for Nicholas Castellanos. Patient owners who held onto him, as well as owners who bought low or added him off the waiver wire, are surely happy with the current output. He has put up an impressive 8 home runs, 12 RBI, 17 runs, with a triple slash of .380/.410/.772. Basically, he’s been on absolute fire and everything is off the charts.

Obviously, something must’ve changed for the sudden outburst in power and overall production. What’s been going on over the last month that the production has taken such a sharp turn? Let’s take a look.

There are very few changes here and most are minimal at that.

If you take a look at the pre-trade batted ball data from Detroit above, you’ll notice an all fields approach with solid LD rate and decent fly ball and ground ball rates.

The HR/FB rate may actually have been unlucky at 9.2% and was the one spot that suggested positive regression was due. That was the lowest mark since having a 9.2% HR/FB rate back in 2015! Since then the HR/FB rate was never lower than 13.4%. Not to mention we are seeing fly balls land over the fence at a record pace. This was obviously due for positive regression.

Here’s that positive regression I was mentioning!

Since the trade to the Chicago Cubs, Nicholas Castellanos has had a 34.8% HR/FB rate. This surely won’t continue but it’s exactly what fantasy owners were waiting on as he regressed to expectations.

This has even come with a slight downtick in the fly ball rate since the trade. This suggests the quality of contact on the balls he’s putting in the air is better.

This can be seen in the steady growth of sweet spot% as the season has gone on. 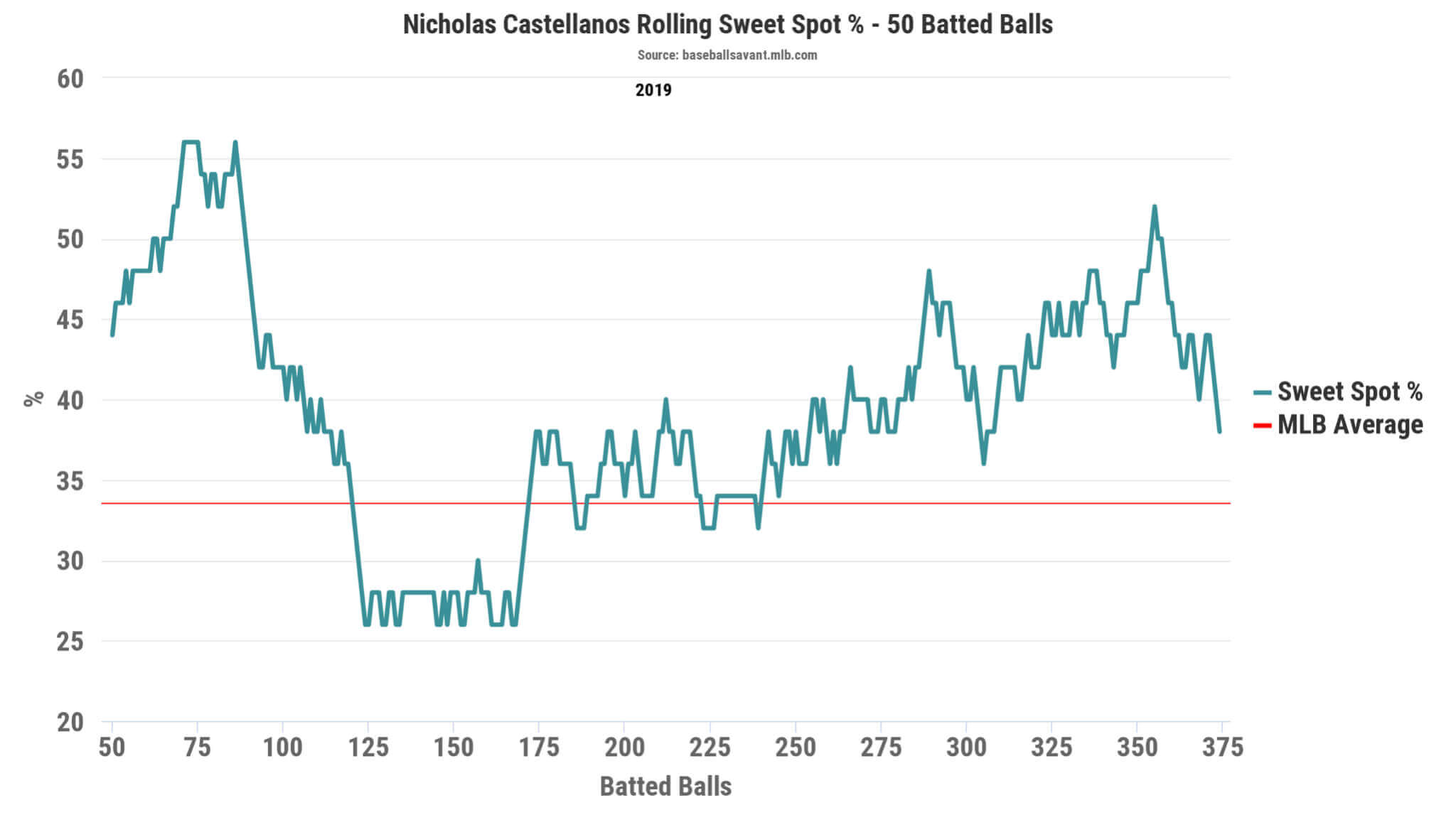 There really is a lot of interesting things that have happened with Nicholas Castellanos in terms of the plate discipline. Just like the batted ball data, I will take a look at the pre-trade data first.

Things are interesting here because it seems you can tell pitchers just attacked him differently compared to previous years.

The F-Strike% was a career-low at 62.2% and this was accompanied by a career-low zone rate of 39.3%. With fewer pitches in the zone as a whole, this may have been what led Castellanos to chase more. The O-Swing% was at a career-high 41.2% so this suggests as much.

I believe this was obviously by design. He was the best hitter, and arguably the only hitter to be concerned about, on the Detroit Tigers. He likely wasn’t given much to hit and pitchers weren’t going to test him. This likely caused him to press a bit in an attempt to force production.

Let’s look at the post-trade numbers.

You’ll notice the F-Strike% actually decreased even more! It’s down to 56.6% since the trade. But the chase rate has also dropped a few points to 39.8%. This seems to point to improved patience at the plate which may allow him to see more pitches he can do something with. There’s been a little more swing and miss in his game with the O-Contact taking a hit but it’s slightly offset due to that chase rate reduction.

Opposing pitchers can’t avoid him now due to the lineup protection around him and he appears to have taken advantage of it. You can see there’s been a change in how pitchers have also attacked him of late. 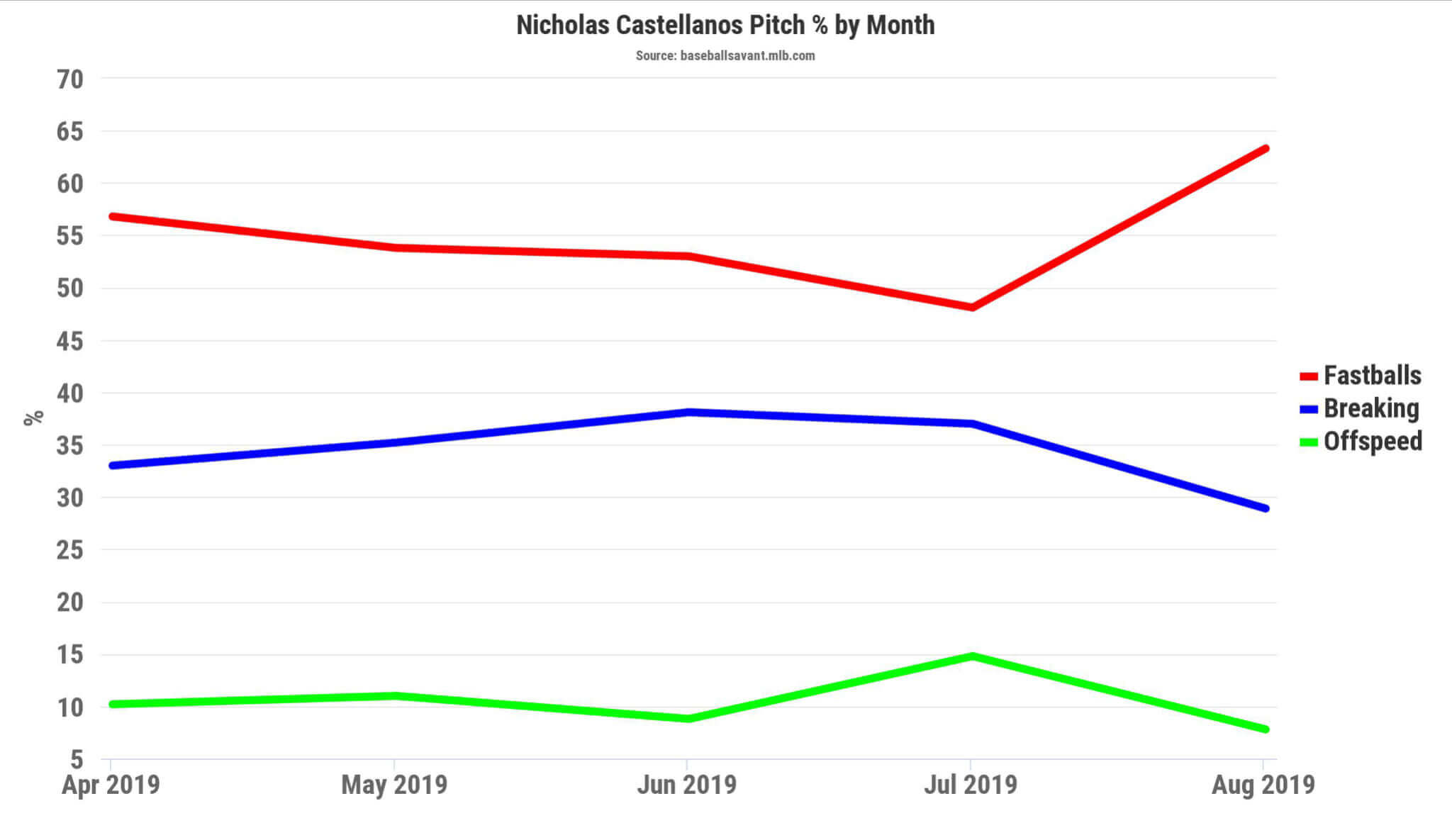 Starting in August, A.K.A the post-trade era, you’ll notice the upward trend of fastballs Nicholas Castellanos is seeing. Just under 65% in the month of August and it’s a season-high.  This change is benefiting him. How is it a benefit you ask? Well, it’s because he crushes fastballs as a whole. 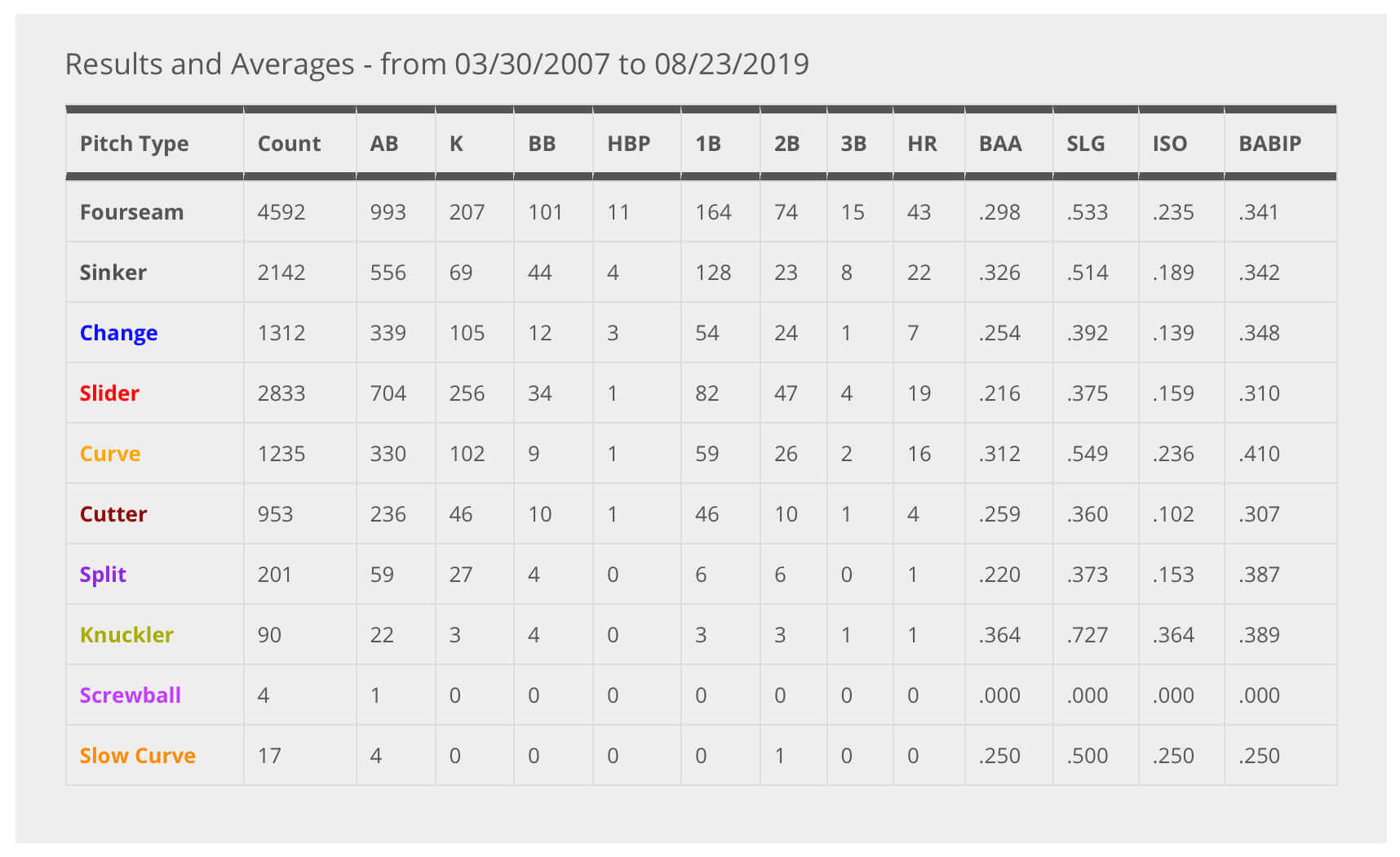 A career batting average of .298 and a career slugging percentage of .533 on four-seamers is exactly why the increase in fastballs is such a benefit to him. Not to mention the similar success on sinkers as well.

Castellanos has been sitting on fastballs of late as well as it seems. 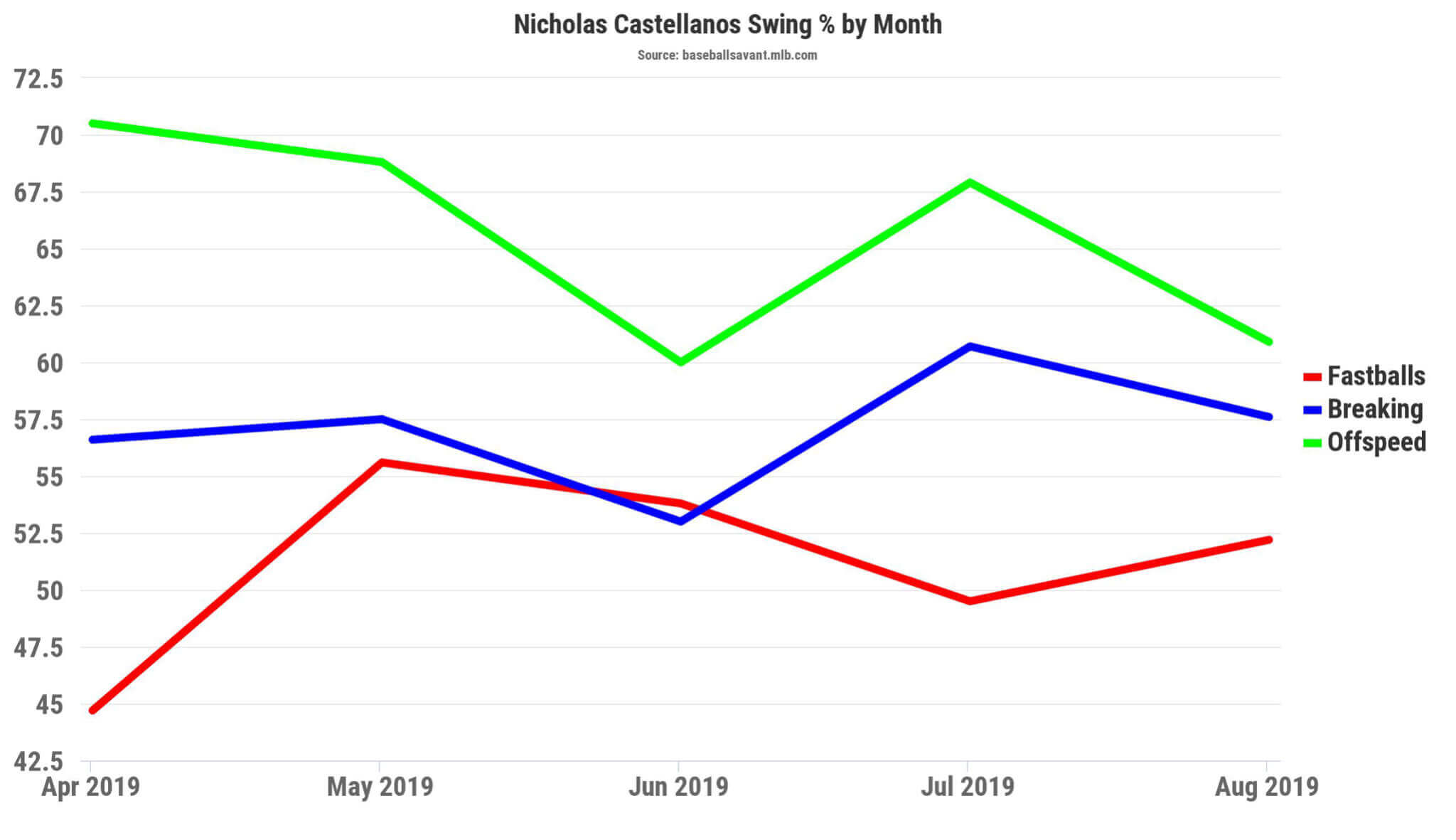 Nicholas Castellanos just appears to be just a solid overall player. Some of the numbers suggest he’s slightly overproducing.

I believe he got off to such a mediocre start that this current hot run probably hasn’t had a chance to fully affect the numbers. I’d like to see the end of season numbers as a whole for Castellanos prior to suggesting regression is coming. Not to mention taking his last few seasons into account, the current stats he has aren’t beyond sustaining.

Things as a whole have been pointing in the right direction of late. The xBA has been on the rise throughout the year. 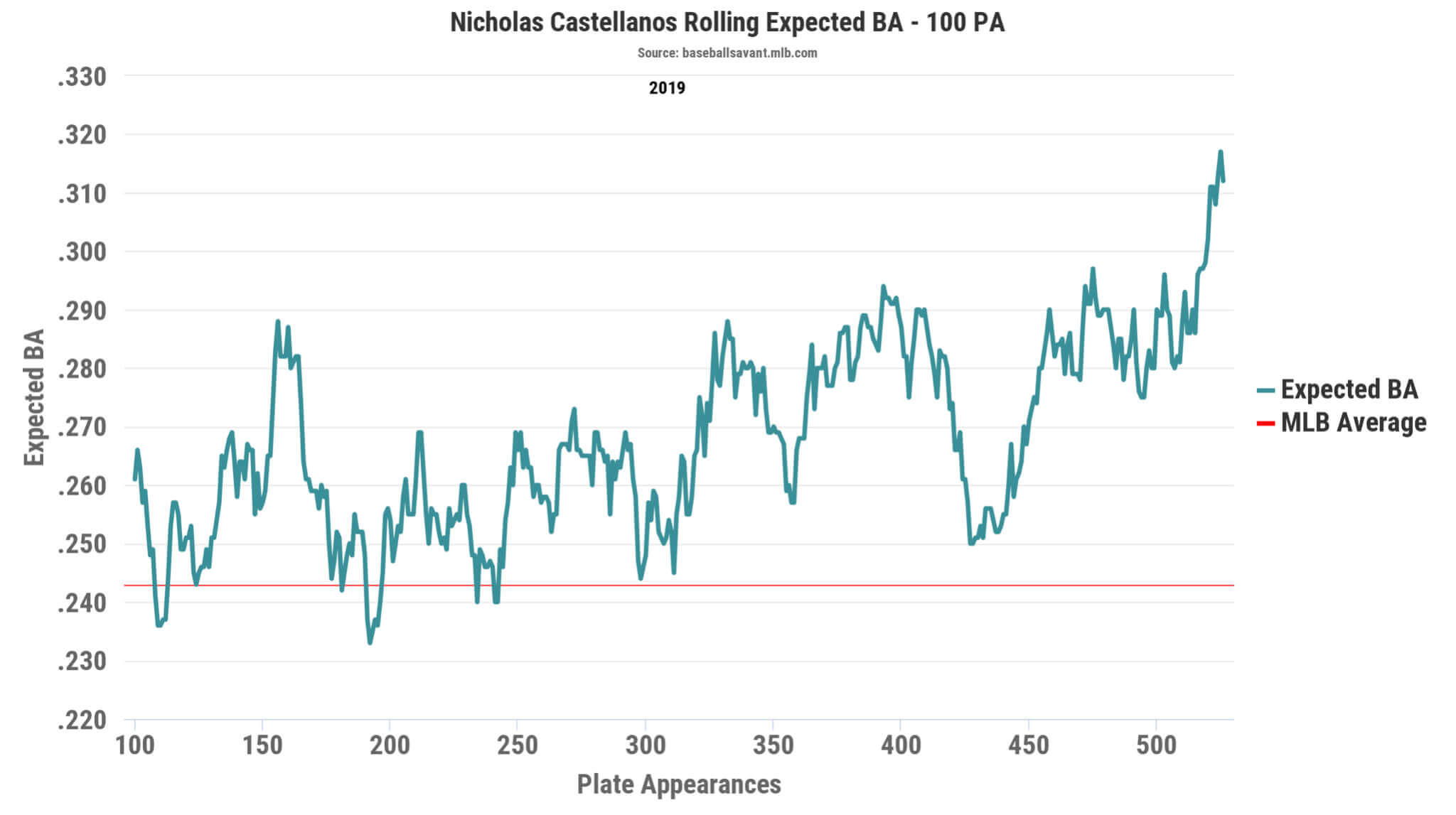 Oh, and the xSLG has also been on the steady incline as well. 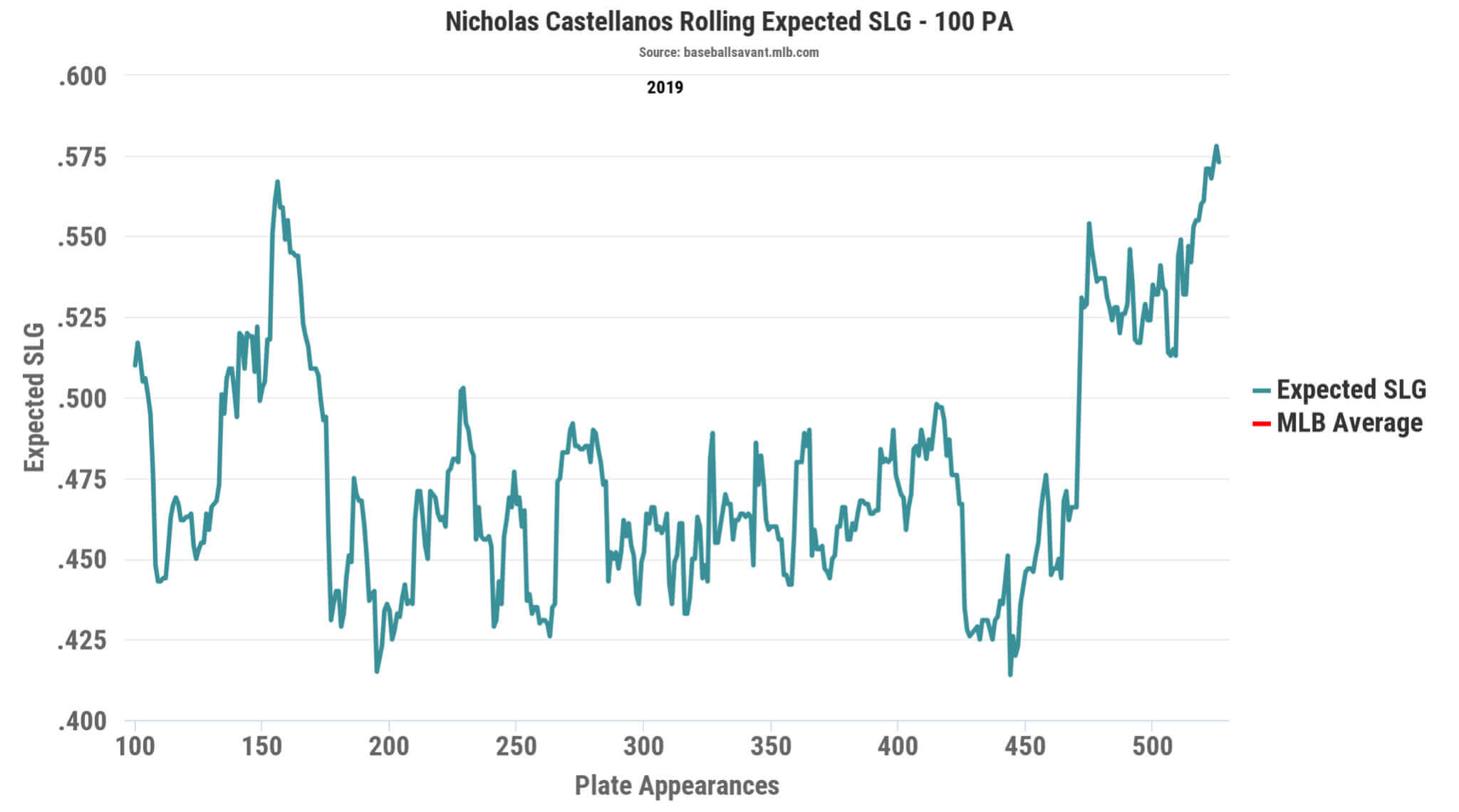 Obviously, he won’t sustain the current torrid pace, but the statcast data may have some adjustments to be made and they may fall closer in line with the last three seasons by the end of September.

I love what I’m seeing from Nicholas Castellanos here in the second half. He’s finally producing as we expected. Unfortunately for him, he was stuck in a terrible situation and it took a toll on his stats. I believe he should come at a similar draft price as he was entering this season. A lot will depend on where he ends up in free agency. I think we all can agree that any place is better than the Detroit Tigers.

Assuming he finishes strong, I ultimately expect roughly a top 80-100 player entering next year. If he tails back off that may change but I don’t think that is going to happen.

It’s hard to truly pinpoint a ranking until we know where he’s playing but I love the floor he offers to a team so I know he will be ranked in that area for me without much doubt in my mind next season.